Abolishing the law against public drunkenness is an important step

It’s nearly midnight. A rowdy group of people who have clearly been drinking heavily tumble out onto the footpath, right in front of you. A few are singing footy songs up into the night sky. Another slumps down and falls asleep. It may be a little disconcerting but if they are not harming anyone, would you call their actions criminal?

In Victoria, you would. Under the Summary Offences Act you can be charged if the police think you are drunk in a public place. It’s up to them to judge, based on your speech, co-ordination and behaviour, and if they believe alcohol is the cause.

But now the Victorian government is moving to abolish the law against public drunkenness (which can leave people facing a fine of more than $1000). 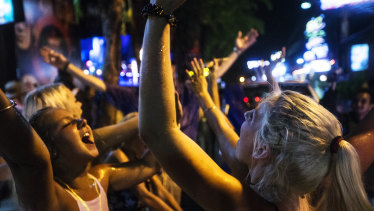 Some groups of people attract more attention for their public behaviour than others.

It’s brought a furious response from Police Association secretary Wayne Gatt who claims it’s “dangerous virtue signalling” that will put the safety of the police, the public and those found intoxicated at risk.

Then again, in NSW the offence was repealed in 1979, without Sydney descending into violent chaos. So, maybe it’s Gatt who’s indulging in mere virtue signalling?

Let’s go back to that boisterous crowd on the footpath. What if they are lawyers or bankers staggering out of the Melbourne Club on Collins Street? Or young tradies outside a pub in Broadmeadows? Or Aboriginal people in Fitzroy? 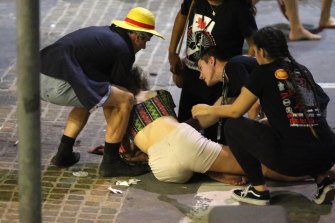 The last thing a drunk person needs is for police to become involved.Credit:Nathan Richter

The law covers all people equally, but the police use their discretion to enforce it differently depending on who you are, or as French writer Anatole France famously quipped, “the law, in its majestic equality, forbids rich and poor alike to sleep under bridges, to beg in the streets, and to steal loaves of bread”.

It’s a vital element of the debate because Aboriginal communities have been at the forefront of the movement to abolish the law because of the clearly discriminatory way in which the laws have been enforced. Research from the Law Institute of Victoria shows that Indigenous Australians make up nearly 30 per cent of all people imprisoned for public order offences such as public drunkenness despite being only 0.8 per cent of the Victorian population.

The 1991 Royal Commission into Aboriginal Deaths in Custody recommended changing the law, so Indigenous Australians are rightly outraged that it’s taken 30 years for Victoria to take action. Because for some people, it’s a matter of life and death.

Yorta Yorta grandmother Tanya Day was arrested in December 2017 for being drunk on a V/Line service train. She had simply fallen asleep. At Castlemaine police station, she repeatedly fell and hit her head. Two weeks later, she died in hospital. The Coroner found that her death was entirely preventable and her treatment affected by an “unconscious bias” against her Aboriginality.

Rather than be arrested, what Ms Day needed was what all intoxicated people need. They just want to go somewhere safe like home, a hospital or a sobering-up shelter. The last thing they need is for the police to get involved. The result is not just better for the person involved but leads to a safer community while saving police resources and also millions of wasted taxpayer dollars.

Some people will, quite rightly, wonder if the law is changed then what can be done if, say, a gang of drunk young people starts harassing families at a local park.

But there will still be laws to cover that. Being drunk and behaving in a riotous or disorderly manner is still a crime. Violence that may have been caused by alcohol will still be a crime. And police can also ban people from specific places where there has been a history of alcohol-related violence.

In other words, police will have full powers to protect the community. What they won’t have is the offence of public drunkenness to use as a fall-back against people who aren’t really doing anything wrong, and that is almost always used against the poor, the mentally ill, Indigenous Australians and other people who wander, lost on the margins of society.

Nobody is saying that excessive alcohol consumption doesn’t bring a range of difficult social problems. But alcohol use and abuse is a public health issue. Shoehorning it into the criminal justice system has failed.

Alcohol use and abuse is a public health issue.Credit:iStock

The abolition of the offence of public drunkenness is an important step in moving the law away from criminalising disadvantage, poverty and mental illness.

Our criminal laws should be an instrument for justice – not injustice. It’s time for a rational and humane approach to a very human problem.

Duncan Fine is a lawyer and regular columnist.