Tiwari said he was bemused at Australia on the one hand sending hundreds of ventilators and other medical supplies to help India’s overwhelmed hospitals treat COVID patients, while on the other, it was acting in a hostile manner.

“You can insist on a negative report [on a coronavirus test] before boarding the flight and test and quarantine them on arrival, but to ban and threaten coercive action goes both against humanity and ethical conduct among sovereign nations who are supposed to be Quad allies,” said Tiwari. 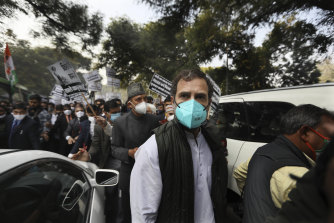 Australia’s flight ban, with its threat of fines and up to five years in prison, has surprised not only the estimated 9,000 Australians stranded in India, but also diplomats and public officials.

Kalarickal Pranchu Fabian, a retired ambassador and professor at the Indian Society of International Law, said he did not think the decision was directed “against” India.

What he found surprising was that Australia could deny the right of every citizen to return home and appeared unable to handle the arrangements required to let people exercise that legal right. The very word “passport”, he said, confers the right of the passport holder to re-enter his or her country.

“Look at the possible numbers. If an Australia citizen in India has COVID, he or she is not likely to be jumping on a plane to begin with. What are the likely numbers of such people, staggered over time? All the Australians ha to do was regulate the traffic. Say ‘we will only allow 200 or 300 passengers in every day because our airports and quarantine facilities cannot handle more’, but you cannot deny them entry.”

He also pointed out that, by refusing entry to its own citizens, Canberra was basically foisting its responsibilities to its citizens onto India, which is already struggling to provide basic health care to those struck down by the virus.

On Tuesday, Prime Minister Scott Morrison said he expected flights to resume shortly after the travel suspension lifts on May 15, but this has not been confirmed.

Cricket officials on Tuesday suspended the money-spinning Indian Premier League, releasing a statement saying that: “While we have tried to bring in some positivity and cheer, it is imperative that the tournament is now suspended and everyone goes back to their families and loved ones in these trying times.”

But there is no legal way home to families right now for Australian cricketers and staff working with the IPL.

Many other countries, including the US, UK, France, Canada, Taiwan and Hong Kong have stopped foreign arrivals from India but are allowing their citizens to return home and quarantine.

“They have done this in the past to our students who bolster their economy and now this. Instead of being empathetic, they believe shutting doors is the answer. At least India should know now who its true friends are,” said Seth.

There has been no statement from the Ministry of External Affairs about the flight ban. This could be the result of the government’s immersion in the tragedy playing all over the country or the preoccupation with the election results that were announced for legislatures in five states on Sunday. Indian media outlets have not yet editorialised on the ban.

Epidemiologists told The Age and The Sydney Morning Herald that while India’s total caseload stood at an alarming 20 million, its 1.3 billion population had to be taken into account. The rate of coronavirus infections per capita in India at roughly 1.3 per cent of the total population is lower than that of the US at its worst, at almost 10 per cent of the population.

Public health expert Dr Dileep Mavalkar, director of the Indian Institute of Public Health in Gandhinagar, Gujarat, said there was no doubt cases in India were under-reported – “you only have to look at how busy and overworked the crematoriums are to know that the real figure is probably four to five times higher”.

Yet, even so, he could not understand the ban. “Australia is an island nation. It’s vast. It’s not Hong Kong. People can’t arrive illegally on boats. You can control things by testing, quarantining and monitoring. In a public health crisis of this nature, governments are meant to be organising help for their own citizens – sending out planes to repatriate them – rather than refusing to take care of them,” he said.

Former Indian high commissioner to Australia Navdeep Singh Suri, who was posted in Canberra from 2015 to 2016, said the ban had to be seen in context in that Australia had from the outset of the pandemic followed an “absolutist, batten-down-the-hatches” policy.

“I don’t think it’s racist. The ban is the outcome of a certain paranoia about infections entering the country, it’s part of an island mentality. By and large, Australia has managed to keep its people safe, the numbers have been low, and the economy has been doing all right. They don’t want to jeopardise this situation,” said Suri.

Some doctors in India, horrified at the explosion of cases and at the negligence shown by the holding of election campaigns and the huge crowds at the Hindu festival of Kumbh Mela last month, believe Australia is entitled to impose the ban.

Dr Rajan Sharma, president of the Indian Medical Association, is recovering from a mild case of COVID-19.

He noted that Indians who returned to Punjab from England brought the UK variant with them, which is now believed to be partially driving the current surge.

“Australia’s stand has always been clear – we are taking no chances. The slightest negligence can result in a resurgence. Of course, people can be tested and quarantined but testing is not 100 per cent accurate either. If just one case slips through, there can be mayhem. Let each country protect itself however it wishes,” said Dr Sharma.

What in the World

A note direct from our foreign correspondents about what’s making headlines around the world. Sign up for our weekly newsletter here.