Airbus furloughs 3,200 UK staff after boss says firm is ‘bleeding cash at an unprecedented speed’ and raises doubts over its survival

Airbus has furloughed 3,200 UK staff after the boss said the firm is ‘bleeding cash at an unprecedented speed’.

Workers at the Broughton factory in Wales will be furloughed and the company will apply for the Government’s job retention scheme.

It comes after the chief executive of aerospace multinational Airbus warned that the company is losing so much money that its survival is at risk.

‘Airbus confirms it has agreed with its social partners to apply the government’s Job Retention Scheme for approximately 3,200 production and production-support employees at its commercial aircraft site in Broughton,’ it said in a statement.

Britain’s job retention scheme allows employers to furlough staff and claim cash grants up to 80 per cent of wages, capped at £2,500 per worker.

Airbus will top up gross salaries to bring the total up to 85-90 per cent of pay, in accordance with an agreement signed with trade union representatives.

The deal affects the majority of the production and production support teams in Broughton, the north Wales factory which assembles wings.

Furlough periods will be staggered, with all starting in the next three weeks and lasting for at least three weeks.

The move does not affect Airbus’ 3,000 staff in Filton, western England, where wings are designed and supported.

In a letter to the firm’s 134,000 global employees including 13,500 in the UK, Guillaume Faury said Airbus ‘may now need to plan for more far-reaching measures’ due to the enormous loss in business.

This could include major job losses, which might be announced on Wednesday, when the firm publishes its first-quarter financial results.

At the start of April, it revealed plans to slash aircraft production by a third, which came following the gradual imposition of increasingly harsher travel restrictions that brought the airline industry to a virtual halt due to the coronavirus pandemic.

Instead of manufacturing over 60 Airbus A320 models every month, the Netherlands-headquartered corporation would make just 40. A330 and A350 aircraft production would also be cut to two and six respectively.

Faury now states though that the one-third loss in business may not be the ‘worst-case scenario we could face.’

He wrote: ‘We’re bleeding cash at an unprecedented speed, which may threaten the very existence of our company. We must now act urgently to reduce our cash-out, restore our financial balance and, ultimately, to regain control of our destiny.’

Industry sources have said a new restructuring plan similar to its 2007 Power8 which saw 10,000 job cuts could be launched in the summer, but Faury indicated the company was already exploring ‘all options’ while waiting for clarity on demand.

People familiar with the matter say Airbus is also in active discussions with European governments about tapping schemes to assist struggling industries, including state-guaranteed loans. 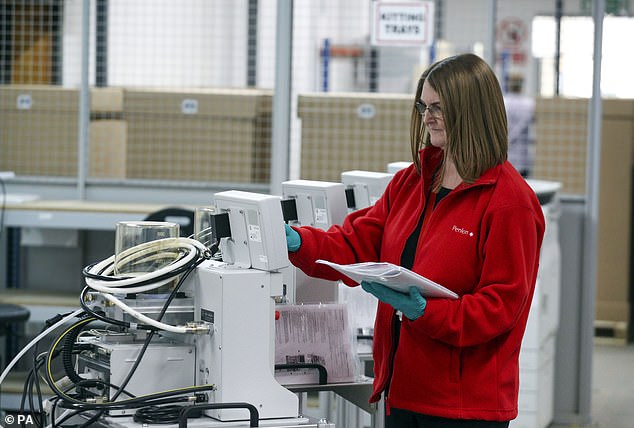 An employee at medical devices manufacturer Penlon tests new ventilators before they are shipped to NHS hospitals. The products were designed by a consortium which includes Airbus

It has already expanded commercial credit lines with banks, buying what Faury described as ‘time to adapt and resize.’

To try and stop the cash flow ebbing, the firm has taken advantage of government-backed furlough schemes, which has assisted 3,000 workers in France.

It also joined the VentilatorChallengeUK consortium, which aimed to produce new ventilators that would go to hospitals treating people with the coronavirus. Medical devices manufacturer Penlon is also a member. 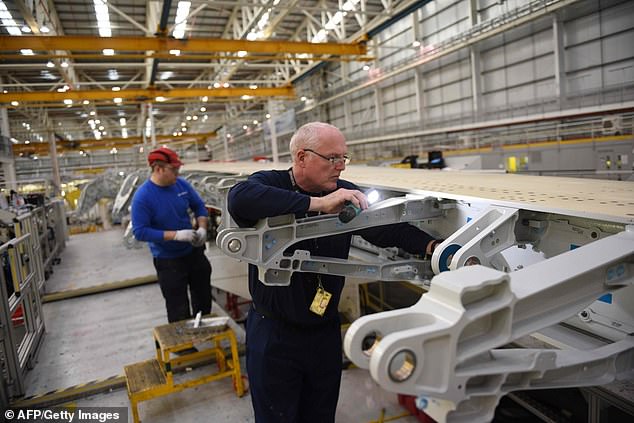 (Above) Workers at Airbus’s factory in Broughton, North Wales. Along with staff at a site in Filton, Bristol, they make the wings for all of the company’s commercial aircraft

Eleven days ago, the Medicines and Healthcare products Regulatory Agency (MHRA) approved the consortium-designed Penlon Prima ESO2 ventilator for use. The government subsequently ordered 15,000 of them.

Airbus is the UK’s biggest aerospace company, employing 13,500 people across 25 sites, including 9,000 at locations in Broughton, North Wales, and Filton in Bristol. Both sites design the wings for all the firm’s commercial aircraft.

Its Oxford base is a major helicopter supplier for the Ministry of Defence and air ambulance services. At the same time, it boasts being the only supplier of rotary-wing aircraft for the UK’s police helicopter fleet.

A company spokesman said Airbus does not comment on internal communications.