Former England striker Andy Carroll’s Mercedes has been smashed in a ‘head-on’ car with a Ford Fiesta – as witnesses say he was left ‘shocked’ and was ‘walking around in a daze’ following the collision.

The ex-Premier League star, 33, was pictured standing by his wrecked £130,000 Mercedes GLS SUV in a residential street understood to be in the Romford area of east London on Saturday afternoon.

Carroll is said to have looked ‘dazed and in utter shock’ before he checked on the wellbeing of three occupants of the Ford Fiesta, The Sun reports.

A picture from the scene that has emerged on social media shows significant damage to Carroll’s vehicle, which appears to have lost a wheel from the crash. 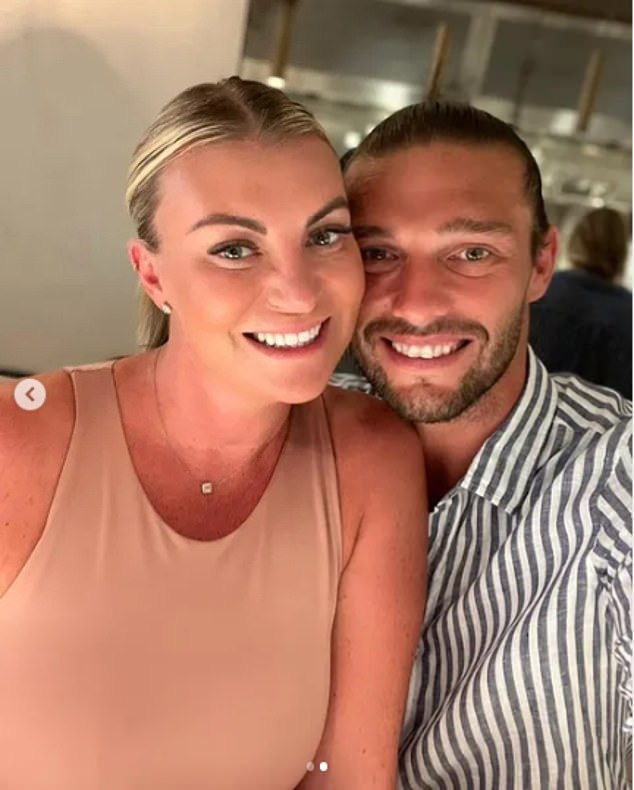 Andy Carroll pictured in a selfie with former TOWIE star wife Billi Mucklow, who he married earlier this year

Witnesses say Carroll was breathalysed at the scene, but no arrests were made in connection with the incident.

He and a male occupant of the Mercedes escaped injury.

Local resident Steve Garboulb told The Sun: ‘It was lucky no one died. The Fiesta and Mercedes collided head-on and another vehicle was hit in the carnage. It was a freak accident.’

John Cooper, another local, added: ‘I heard the most awful bang. I saw Andy Carroll emerge from his vehicle. He was wandering around in a daze.’

The couple tied the knot at Hampshire’s Four Seasons Hotel after a tumultuous build-up which saw drama erupt when photos emerged of the sportsman passed out in bed with two women during his Dubai stag-do.

The bride and groom chose a traditional all-white theme for their lavish wedding ceremony at the five star hotel – and exchanged vows surrounded by displays of white roses during the ceremony, which took place in a spectacular 16th century walled garden.