Miles Taylor, the former chief of staff for the Department of Homeland Security and vocal Donald Trump critic, is ‘Anonymous,’ the author of a controversial New York Times op-ed in September 2018 that described a resistance movement to the president within his own administration.

He revealed himself on Twitter Wednesday afternoon ahead of an interview with CNN’s Jake Tapper. Taylor also wrote a book under his name de plume and is a CNN contributor, where he publicly bashes President Trump’s actions and his policies.

‘Donald Trump is a man without character. It’s why I wrote “A Warning”…and it’s why me & my colleagues have spoken out against him (in our own names) for months. It’s time for everyone to step out of the shadows,’ he tweeted.

‘This low-level, disgruntled former staffer is a liar and a coward who chose anonymity over action and leaking over leading. He was ineffective and incompetent during his time as DHS Chief of Staff which is why he was promptly fired after only serving in this role for a matter of weeks. It is appalling a low-ranking official would be granted anonymity and it is clear the New York Times is doing the bidding of Never-Trumpers and Democrats,’ she said in a statement.

Taylor, in a lengthy statement posted to Medium, said he wrote his op-ed and book anonymously because ‘issuing my critiques without attribution forced the President to answer them directly on their merits or not at all, rather than creating distractions through petty insults and name-calling. I wanted the attention to be on the arguments themselves.’

Taylor, who has endorsed Joe Biden, said Trump did not deserve a second term.

‘He doesn’t deserve a second term in office, and we don’t deserve to live through it,’ he said.

He denied being motivated for money, writing that ‘I declined a hefty monetary advance and pledged to donate the bulk of the proceeds.’ 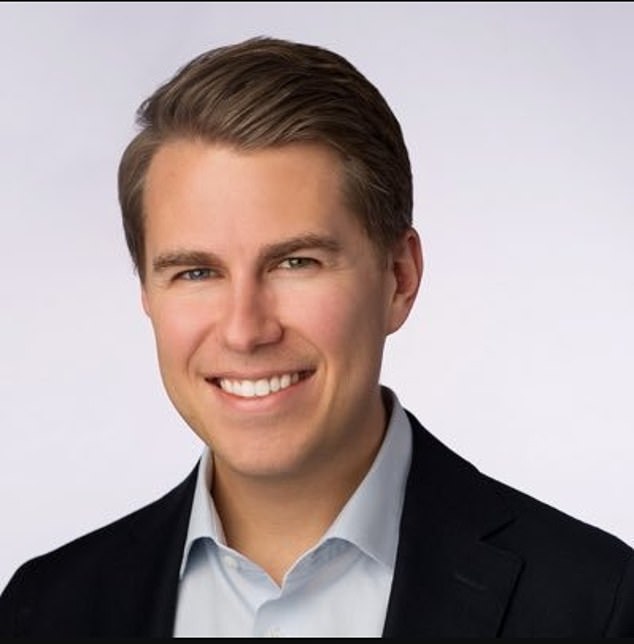 Miles Taylor, the former chief of staff for the Department of Homeland Security and vocal Donald Trump critic, is ‘Anonymous’ 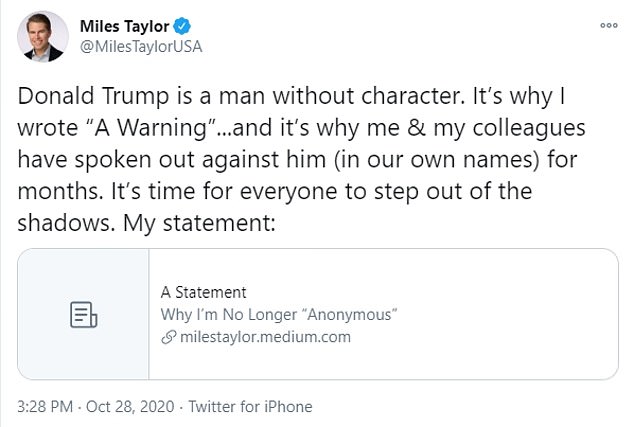 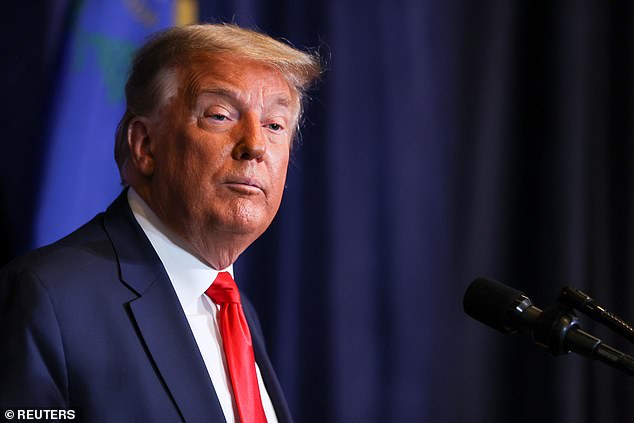 Taylor was one of a group of Republicans who endorsed Biden this summer ahead of the Democratic National Convention.

He went public with his criticism of Trump in August. Near that same time, ‘Anonymous’ also endorsed Biden.

During an interview with CNN’s Anderson Cooper in August, Taylor denied being the ‘anonymous’ author.

‘I wear a mask for two things, Anderson: Halloween and pandemics. So, no,’ he said in an interview on CNN.

‘This is the least impressive, lamest political ‘reveal’ of all time,’ said Hogan Gidley, the former deputy White House press secretary who’s now a spokesperson for the campaign.

‘I worked with DHS officials while I was in the White House, and even I had to research who Miles Taylor was. He’s just another standard-issue arrogant, Washington, DC swamp bro who loved President Trump until he figured out he could try to make money by attacking him,’ he added. 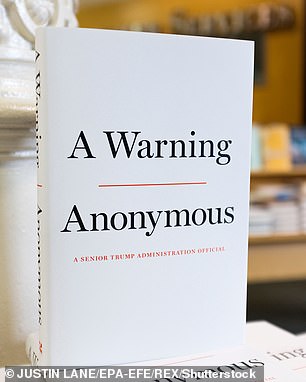 ‘Among the long list of colossal embarrassments, and there are many, the best is Miles Taylor writing an op-ed trashing the administration he took a paycheck from… and then lying to CNN, the network he now works for, when asked about it on air. What a little circus clown,’ he wrote on Twitter.

Trump weighed in on Taylor in August when the former DHS staffer endorsed Biden and slammed the president in his ensuing media tour.

He called Taylor a ‘DISGRUNTLED EMPLOYEE’ who I ‘do not know (never heard of him),’ and went on to complain that the media is embracing Taylor with ‘open arms.’

‘Said to be a real “stiff,”‘ Trump also offered. ‘They will take anyone against us!’ he railed.

In response, Taylor produced a picture of him alongside Trump in the Oval Office, where they’re both giving the camera a thumbs up.

He served at DHS between 2017 and 2019 and said he ‘witnessed the damning results firsthand’ of Trump’s ‘personal deficiencies.’  He served as chief of staff for then-DHS secretary Kirstjen Nielsen, which would have put him in meetings with White House officials on matters of immigration and national security.

In an online introduction to the 2017 New York Times piece, which became an immediate controversy, the Times said the author’s ‘identity is known to us’ and the person’s ‘job would be jeopardized by its disclosure. We believe publishing this essay anonymously is the only way to deliver an important perspective to our readers.’

Several Trump figures were named as the possible author, including Vice President Mike Pence and then-counselor to the president Kellyanne Conway.

The identity of ‘anonymous’ consumed the president and his aides for some time and became one of Washington’s favorite guessing games.

The New York Times op-ed describes a ‘quiet resistance’ that wasn’t designed to bring Trump down – only to curb his worst impulses.

The op-ed lost its impact over the years as a number of high-profile former Trump staffers bashed the president publicly, including former National Security Adviser John Bolton and former Defense Secretary Jim Mattis. 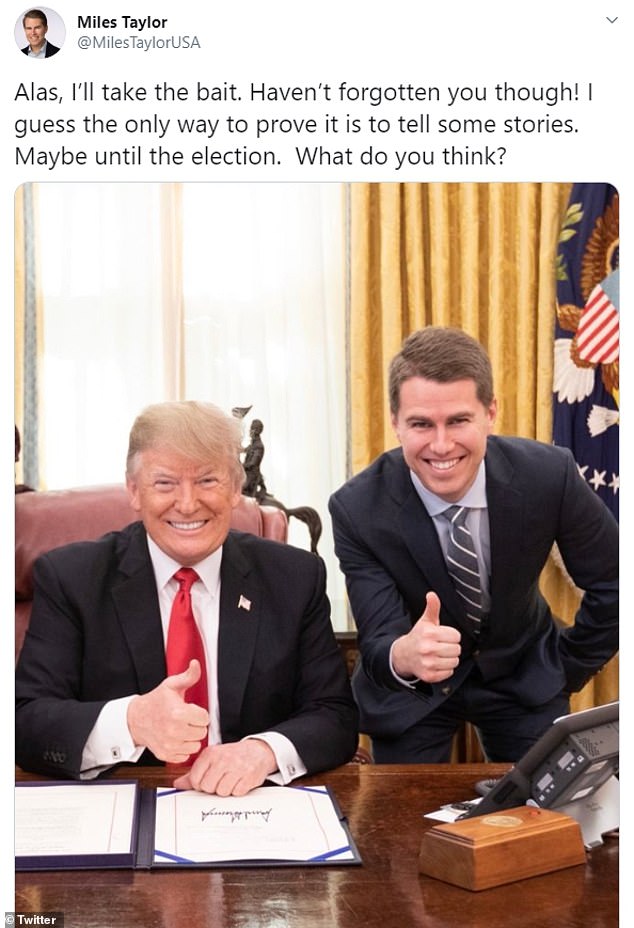 Miles Taylor, the former DHS chief of staff who endorsed Joe Biden earlier this week, produced a thumbs up, Oval Office picture of himself with President Donald Trump after the president tweeted that he didn’t know him 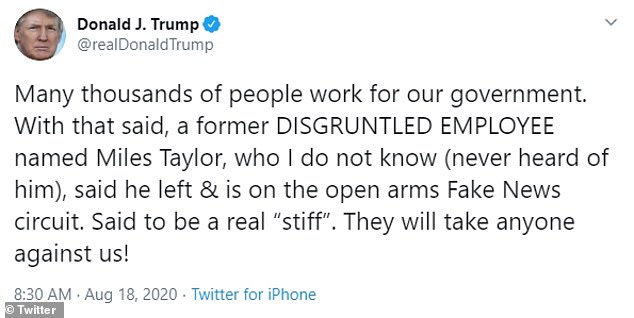 Trump hammered Taylor in a Tuesday morning tweet. Trump said he didn’t know the aide but he was ‘said to be a real “stiff”‘

The uncertainty over who wrote it was one of the reasons the Times op-ed caused such a firestorm as most of the speculation on the author’s identity focused on high-level White House officials.

‘Ours is not the popular ‘resistance’ of the left,’ the author wrote in the piece. ‘We want the administration to succeed and think that many of its policies have already made America safer and more prosperous.’

‘It may be cold comfort in this chaotic era, but Americans should know that there are adults in the room. We fully recognize what is happening. And we are trying to do what’s right even when Donald Trump won’t.’

‘But we believe our first duty is to this country, and the president continues to act in a manner that is detrimental to the health of our republic.’

‘So rather than risk the invocation of the Constitution’s 25th Amendment, the prescribed route for removing a president, he boasts that ‘we will do what we can to steer the administration in the right direction until – one way or another – it’s over.’

He later wrote the book ‘A Warning’ that came out in November of last year.

The president attacked the author in 2018, suggesting alternatively that the op-ed might be an act of treason, and that the author might be a fictitious creation of the Times rather than a real person.

‘Does the so-called “Senior Administration Official” really exist, or is it just the Failing New York Times with another phony source?’ he tweeted at the time.

‘If the GUTLESS anonymous person does indeed exist, the Times must, for National Security purposes, turn him/her over to government at once!’

The White House conducted an unsuccessful mole hunt for the person. Trump tasked then-Attorney General Jeff Sessions with finding out who wrote the piece. 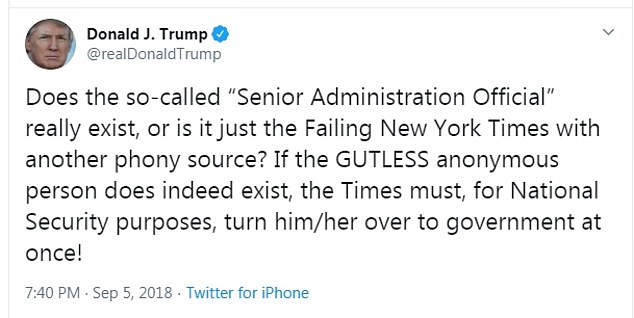 The Times op-ed described the president as ‘impetuous, adversarial, petty and ineffective’ in the way he manages the government, and said the author is part of an organized ‘resistance’ whose goal is ‘to preserve our democratic institutions while thwarting Trump’s more misguided impulses until he is out of office.’

Sarah Sanders, then the White House press secretary said in a statement at the time that the essay was ‘pathetic, reckless, and selfish’ and challenged the Times to ‘issue an apology.’

‘This is just another example of the liberal media’s concerted effort to discredit the President,’ she said then.