Australia's oldest family-owned meat processor has been hit with a new trade suspension by China, days after the Morrison government rejected a $600 million Chinese bid for Lion Dairy and Drinks.

China's customs department suspended exports from John Dee on Wednesday after it said it found the banned chemical chloramphenicol, used in the treatment of bacterial infections in dogs and cats, in pieces of sirloin at Chinese ports. 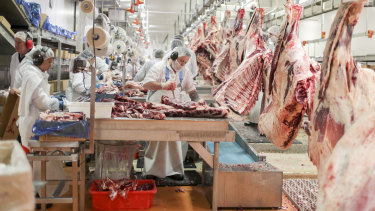 "The defective products were destroyed and were not allowed to enter the country," it said in a statement published on Friday morning.

"In order to ensure the safety of imported meat products, customs has officially notified Australia to suspend the export of the company to China, and requires Australia to conduct a comprehensive investigation of the relevant company within 45 days and provide feedback to the Chinese side."

John Dee employs more than 600 staff across sites in Warwick and Inglewood in regional Queensland, where $5.8 billion worth of beef is exported worldwide from across the industry each year. 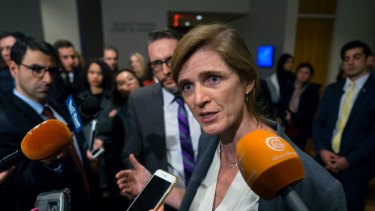 Former US Ambassador to the UN Samantha Power in 2016. Credit:AP

"It is going to be a relationship that is the most complex that America has ever been privy to," she said during a virtual appearance at the Lowy Institute on Friday. "It's not just human rights. It's also in the economic domain that confrontations are inevitable. That competition is going to be real."

Power warned the peace and security agenda of the UN Security Council could be up-ended beyond recognition, with international laws bowing to national restrictions.

"We have seen that movie before. That is how we ended up with Nuremberg Laws," she said in reference to the racist laws imposed by Nazi Germany on the Jewish population in the lead up to World War II.

"China wants to go back in time and have state fiat be the final decider."

Wang Xining, China's deputy head of mission in Australia, said on Wednesday the Australian government "should respect sovereignty and integrity, and refrain from interfering in others affairs".