Baby, one more time: The busker wowing the crowd outside Hamer Hall

When Melbourne busker Frankie Lee belts out a pop song, he has the magical ability to start a party on the pavement.

People aged from seven to 77 find themselves spontaneously singing and dancing to songs by ABBA, Britney Spears or Kylie Minogue.

Inside Hamer Hall, the Melbourne Symphony Orchestra might be playing Beethoven, but at the front of the building, the flamboyant street entertainer is slaying them with pop classics.

On a cold Friday night, Lee, 75, melted hearts among the theatre and restaurant crowds with tunes such as Spears’ Baby One More Time and a disco version of Celine Dion’s My Heart Will Go On.

Teenagers took selfies with him, kids clapped and swayed, and a middle-aged bloke yelled, “I bloody love you!”

But it was Neil Diamond’s Sweet Caroline that cast the biggest spell. 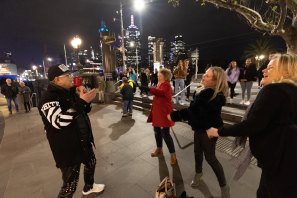 Maurice Wall, 60, of North Melbourne, who comes to the city to watch Lee, said: “I like his voice and the music he plays. It feels good.

“It’s music from my era that I can relate to, like Neil Diamond’s Song Sung Blue and songs by Jimmy Barnes. And there are people around. I was dragged up to dance one night, which was good.” 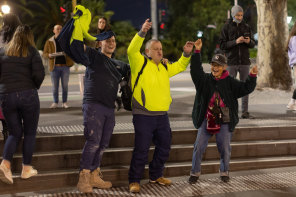 Cathy Paleologoudias, 54, from Williamstown, said: “He’s great to dance to. Just the catchy tunes, and he gets everyone dancing. It makes the city more fun. This is the biggest crowd I’ve ever seen, but everyone was loving it, having such a good time.”

Aaron Smith, an airconditioning tradesman from Sandringham, who sang along with his son Harrison, 19, for half an hour, said Lee was “awesome”.

“I reckon that is what Melbourne needs – having people sing good songs that everyone can get involved in,” he said.

Eddie Mesalic, a visitor from Brisbane, said Lee was “fantastic”. 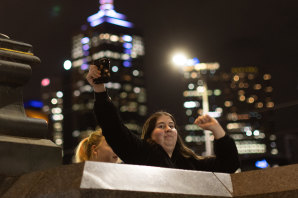 A woman looks on from Princes Bridge as Frankie Lee sings outside Hamer Hall.Credit:Jason South

”He’s a great entertainer,” he said. “I love his energy and positivity. It’s great to see someone of his age all dressed up and enjoying himself, and the crowd seems to love him.”

Lee, whose YouTube channel, Frankie33888, has thousands of subscribers, adapts his playlist according to who is in front of him.

It might be Taylor Swift for young people, Frank Sinatra for the older crowd and Jimmy Barnes’ Working Class Man for the football crowd. He said fans gave him flowers, chocolate or wine. Once when he sang the Bee Gees’ How Can You Mend a Broken Heart, a woman hugged him.

“People have said I’ve got a good voice,” Lee said. “They say they feel happy when they see me singing. They want to see me more.” 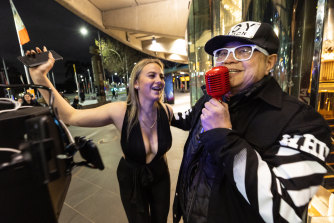 Lee has been busking every weekend for the past three months. Credit:Jason South

Lee, a Hong Kong immigrant who retired as a toy importer 11 years ago, wants to do this for the rest of his life.

Before the COVID-19 pandemic, he busked in the city about once a month, on Saturday and Sunday nights. He was forced to take two years off because of COVID-19 restrictions, but in the past three months, he has busked every Friday, Saturday and Sunday. The increase came after a recent health scare.

A year ago, after a routine check up led to a CT scan that found a 90 per cent blockage in three of the arteries in his heart, he had an operation to insert three stents.

“It changed my life,” he said. “I find that you have to enjoy yourself more. And maybe bring more happiness to people.

“You don’t know what will happen tomorrow. Anything can happen. Particularly at my age.

“So I enjoy my life and singing is my best hobby. The best thing I do is singing. And to see people happy, and responding, I get satisfaction.”