Bangladesh sentences five men to death over gang-rape of teenager

Five men who gang-raped a 15-year-old girl have today been sentenced to death in Bangladesh, just days after the country approved capital punishment for rape cases.

The sentence was handed down in the country’s northern district of Tangail by a special tribunal set up to deal with cases of abuse against women and children.

Prosecutor Nasim Ahmed said the victim’s boyfriend took her to a riverside where she was raped by him and two friends. Two others helped them.

‘All five were found guilty and have been sentenced to death,’ Ahmed told AFP.

It marks the first conviction since the government of Prime Minister Sheikh Hasina this week introduced the death penalty for rape. 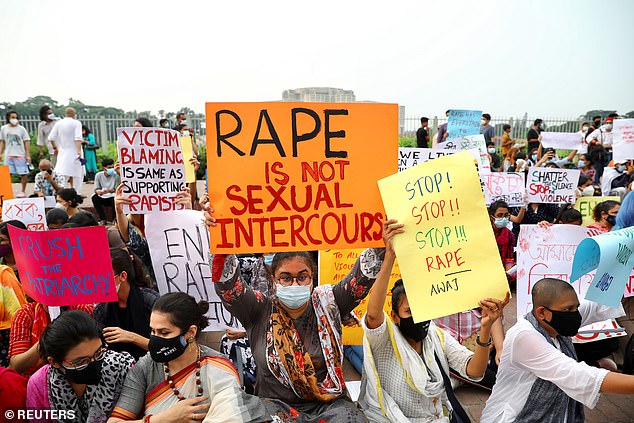 A Bangladeshi court has sentenced five men to death over the gang-rape of a teenager. Above, members of a feminist group take to the streets of Dhaka on October 10 to demand justice over alleged gang-rape of a woman in the country’s southern district of Noakhali

Gang-rape already carried the death sentence, but rape by a single offender had previously been punishable only by life imprisonment.

Last week demonstrations broke out across the country after harrowing footage of a group of men stripping and attacking a woman went viral on social media.

National anger over the issue has been simmering since last month, when members of the ruling party’s student wing were arrested and charged in a separate gang rape case.

Protesters in the capital, Dhaka, and elsewhere have demanded stiffer punishments, faster trials and an end to what they see as a culture of impunity for sex crimes.

In response, the country’s cabinet this week approved an increase in the maximum punishment in rape cases to death from life imprisonment. 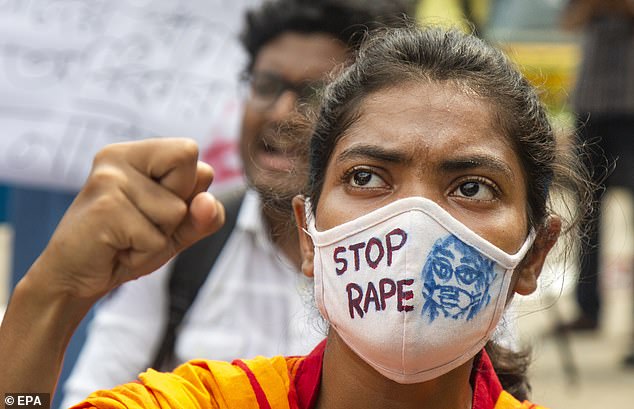 A series of violent sexual attacks in recent weeks has triggered protests in the capital, Dhaka, and elsewhere. Above, a student takes part in a protest demanding justice for women the capital city on October 8

In Bangladesh, only around three percent of rape cases end in convictions.

Ain-o-Salish Kendra, a women’s rights group, said 889 rapes, including hundreds of gang rapes, occurred between January and August this year. At least 41 victims died, it said.

Rights activists have criticised the introduction of the death sentence for rape saying it will not reduce violence against women.

‘This regressive step is a fig leaf that deflects attention from the lack of real action to address the appalling brutality faced by so many Bangladeshi women,” Amnesty International said.