Beachgoer is left with serious burns as blaze tears through restaurant

A casualty has been left with serious burns after a fire teared through a beachfront bar in Cornwall today.

Emergency services rushed to the tourist hotspot after the blaze started just after 3.20pm at The Balcony Bar and Kitchen in St Ives.

Huge clouds of smoke billowed across the skyline at the waterfront as people frantically tried to escape the scene.

Police have since confirmed one person has sustained ‘potentially serious burns’.

The cause of the blaze has not been released, but witnesses confirmed an air ambulance had arrived at the scene and taken the casualty away. 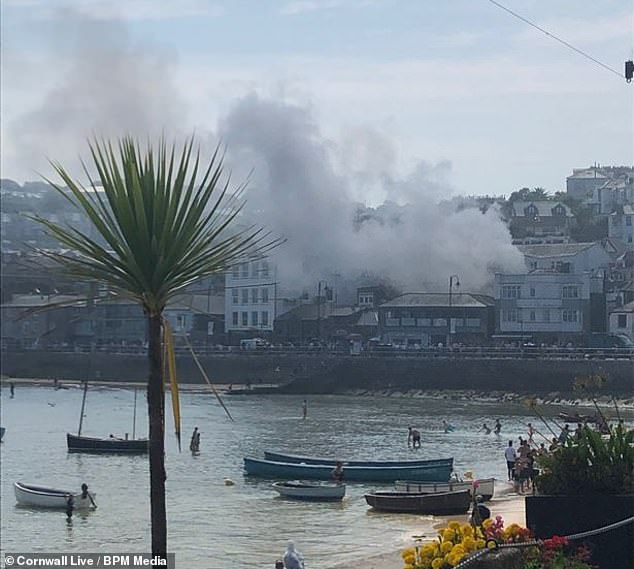 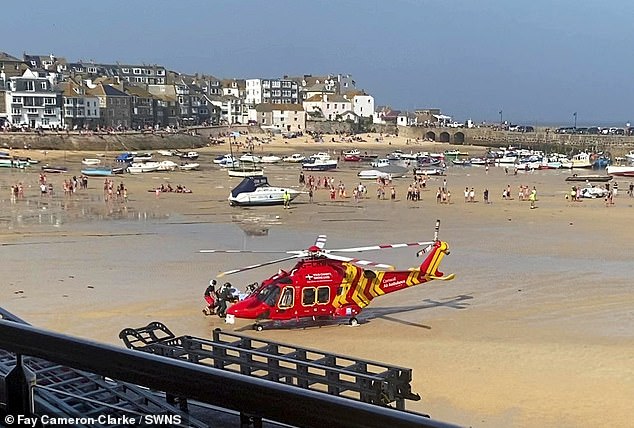 Webcams from the local area show tourists and locals packed onto the beaches around the town, as a large number of emergency service vehicles, including the Cornwall Fire and Rescue, attended the scene of the fire.

Chloe Emery, 26, manager at the neighbouring Beach Café Bar, said: ‘There’s been an accident and people are injured.

‘I saw black smoke so I called the fire brigade, I don’t know how long it took for them to arrive because I was making sure everyone here was ok.

‘It was just a small amount and it dissipated quite quickly, it was coming from the kitchen.

‘There was clearly someone in pain, I don’t know what’s going on at the minute but I suspect that someone may be injured.

‘I’m friends with the people who work there and I’m worried about them. I hope everyone is ok.’

‘It’s been going on for about two hours. People were screaming and it sounded like they were in pain, it was disturbing.

‘There is an air ambulance but we don’t know what’s going on.

‘The beach hasn’t been cordoned off but there’s restricted access.

‘I heard an explosion but it seems like it was pretty well contained.’

Witnesses claimed some parents were left ‘throwing their children down the stairs’ inside the restaurant in an effort to escape the blaze.

Mark Hefner Johns, who was dining at the restaurant when the fire broke out, told Cornwall Live: ”We were all but finishing our food when a huge explosion went off and it was loud.

‘Seconds after that an alarm operated by a member of staff was screaming for people to get out and nobody thought about anything other than getting out.

‘People were pulling their children away from the tables and pushing them down the stairs to get them out of the building due to the panic and number of staff shouting after the noise.’ 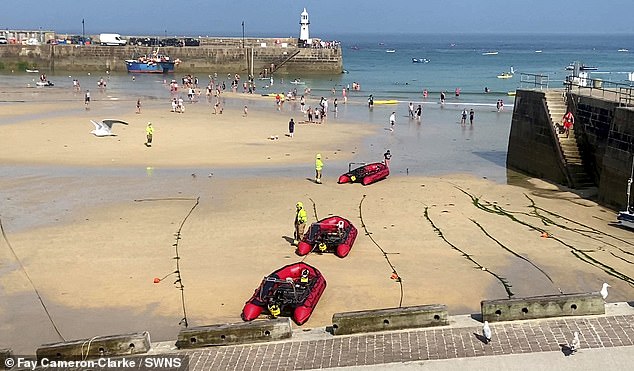 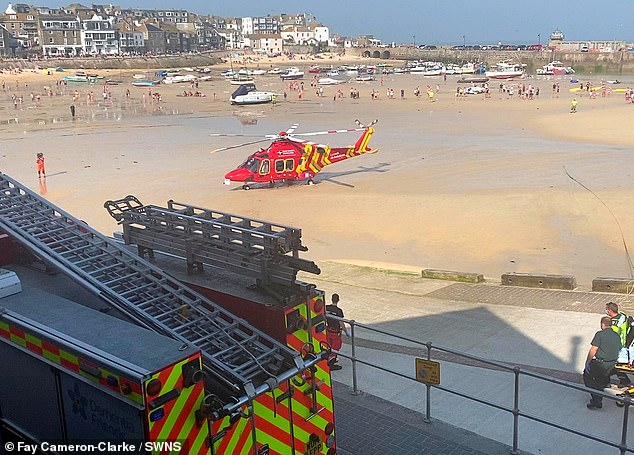 John Chard told Radio Cornwall he was out on his boat at the time and ‘saw what appeared to be some sort of explosion’.

He said: ‘Something blew up – maybe a gas cylinder. There was a massive plume of smoke for about 30 seconds.’

Devon and Cornwall Police have confirmed that fire, police and ambulance were all in attendance after it was reported at 3.20pm today.

A spokesperson added: ‘One person has sustained potentially serious burns.

‘Street marshals are helping to direct traffic and pedestrians, according to the police.’

Traffic monitoring service, Inrix has issued an alert, as Wharf Road, where the fire is, has been closed.