London: Boris Johnson's Brexit deal has passed the House of Commons with an overwhelming majority, bringing to an end four years of political deadlock that cost his predecessor, Theresa May, her job.

The British Prime Minister signed the deal minutes after the vote on Wednesday, local time. The paperwork for the deal had been flown in from Brussels, where it was signed by EU chiefs hours earlier – just one day before the end of a Brexit transition period that will signal Britain's departure from the single market. 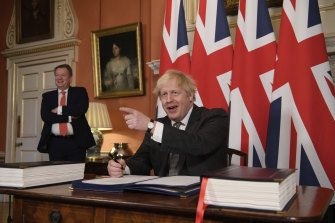 "We said we'd get Brexit done, let's keep Brexit done," Johnson told the Commons, as he opened a five-hour debate before the vote.

He said that he hoped the treaty would end some of the "rancour and recrimination" caused by Brexit.

"To leave old arguments – old, desiccated, tired, super-masticated arguments – behind, move on and build a new and great future for our country, because those of us who campaigned for Britain to leave the EU never sought a rupture with our closest neighbours," he said.

May was the first backbencher to speak in favour of the bill, which was carried by an overwhelming majority: 521 votes in favour compared to 73 against.

Among the 73 no votes were 36 Labour MPs, including one frontbencher, who defied leader Keir Starmer's instructions to vote for the deal.

high-profile former frontbencher Diane Abbott revealed to this masthead ahead of the vote that she would be among the rebels.

And Jeremy Corbyn, the former Labour leader who sits as an independent MP, abstained, along with a string of his former hard-left allies and some soft-left MPs.

Starmer said the deal was "thin" but the only choice.

"It is imperfect, it is thin and it is the consequence of the Prime Minister’s political choices, but we have only one day before the end of the transition period, and it is the only deal that we have," Starmer said.

This prompted May – who had urged Labour to back her deal proposing a far closer regulatory relationship with Europe – to take aim.

"In early 2019, there was the opportunity of a better deal on the table, and he voted against it, so I will take no lectures from the Leader of the Opposition on this deal," she said.

Caroline Lucas, the only Green MP in the Commons, said the deal would turn Kent, the county that hosts the Port of Dover, into "a diesel-stained monument to hubris and political myopia".

The bill was sent to the Lords for debate, where it is expected to be approved. It will then be sent to Windsor Castle for the Queen's Royal Assent.

MPs from minor parties, the Scottish National Party and the Liberal Democrats voted against the bill.

The bill formalises new trading arrangements, including the tariff- and quota-free trading of goods.

However, the financial services sector has no special trading arrangements – something that was strongly criticised by MPs during the Commons debate.

Australia's Trade Minister Dan Tehan welcomed the agreement, saying it would enable Australia and Britain to strike their own free-trade deal from January 1.

"The government welcomes the agreement between the UK and EU on Brexit and in particular the additional certainty it will provide in Europe and globally," Tehan said.

"The deal will give renewed impetus to our efforts to secure comprehensive and ambitious free trade agreements with the UK and the EU."