Boris Johnson’s last-gasp change to Christmas rules for millions of people has seen support for Labour surge to its highest of the entire pandemic, a new poll revealed today.

Keir Starmer’s party holds a four-point lead over the Conservatives going into the festive period amid ongoing chaos around the rules that will be in place for families in England.

The poll for YouGov was conducted on Monday and Tuesday this week, as the Prime Minister announce his decision to cut a festive relaxation of Covid rules from five days to one and plunge many areas into a new, tougher, Tier 4 lockdown.

He had previously attacked suggestions that the planned easing of Covid rules, only to make a last-minute U-turn.

It saw the Tories drop from 39 to 37 per cent in the space of a week, at the same time Labour went from 37 to 41 per cent. It is the first time the opposition party has breached the 40 per cent mark in polls by the firm under Sir Keir, who became leader in April. 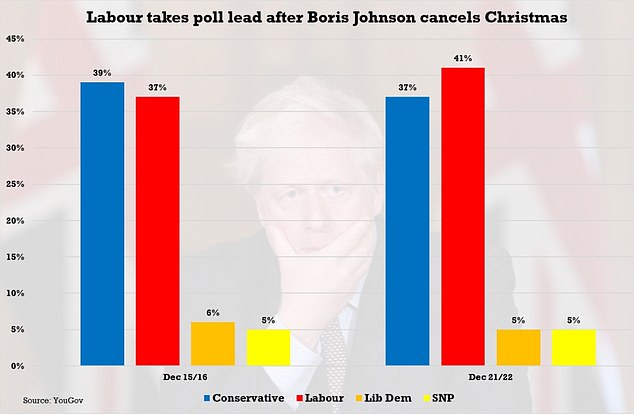 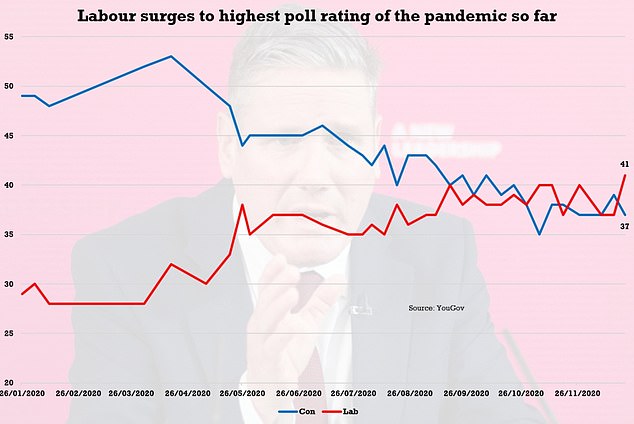 It came as millions more families in England faced being placed into the toughest Tier 4 immediately after Christmas Day as ministers battle to control a Covid surge powered by the super-strain.

West Sussex and parts of East Sussex not already in the top tier could be included as early as Boxing Day under plans to be discussed by ministers today.

Also under consideration are Burnley in Lancashire, where the infection rate currently sits at 438 per 100,000 people, and Lincoln and Boston in Lincolnshire, which both have rates in excess of 400.

By contrast, Gosport in Hampshire, which is already under Tier 4 measures, has 159 cases per 100,000 and the Chiltern area of Buckinghamshire has 202.

A Gold Command meeting yesterday stopped short of plunging Birmingham into Tier 4 – but its unclear whether that will stay the same at the next Government announcement.

Ministers and scientists are due to meet this morning to discuss whether changes need to be made before the planned December 30 review of the system introduced last week.

The new variant prevalent in the South East has doubled the number of cases in a week, with another 36,804 new infections recorded yesterday, and 691 deaths.

And Government officials are looking at plans for a third total lockdown across the whole of England in January as the new coronavirus strain – thought to be up to 70 per cent more infectious – spread to the South West, Midlands and the North.

An announcement from Boris Johnson could come as soon as today, with Whitehall sources saying there was a ‘high chance’ of a New Year lockdown.

A senior minister sowed confusion this morning over whether Christmas Day bubbles could be axed at the last minute, potentially throwing the Christmas plans of millions into further chaos.

Communities Secretary Robert Jenrick initially refused to rule out changes being made to the plan to allow extended households to meed on December 25th amid a surge in cases powered by a mutant Covid strain.

Mr Jenrick told Sky News this morning: ‘If we need to change that (Christmas plans) in light of the new variant, then we won’t hesitate to do so.’

But later on BBC Breakfast he said it was ‘extremely unlikely’ that Christmas Day plans would be upended with less than 48 hours to go until presents are unwrapped.

He told BBC Breakfast there were currently ‘no plans’ to make changes for the 25th – despite earlier confirming ministers and experts are due to meet this morning to discuss what changes to England’s tiers are required in the face of the growth in cases.

It was only in his third interview of the morning, to Radio 4’s Today Programme, that he vowed: ‘We are not going to change people’s plans 24-48 hours before Christmas.’