Home » World News » Boy, 3, left with broken collar bones after he was hit by e-scooter

Boy, 3, left with broken collar bones after he was hit by e-scooter

A three-year-old boy was left with two broken collar bones after being knocked down in an e-scooter hit and run.

The child was struck from behind while walking along the pavement with his grandmother.

The rider of the electric scooter fell off during the crash but remounted and fled from the scene in Feltahm High Street, west London at around 6pm on Saturday.

Paramedics took the boy to hospital and he has since been discharged.

Police have now launched an investigation into the crash and are asking for anyone who saw it, or has dashcam footage, to come forward.

A Scotland Yard spokesperson said: ‘Police were called at 6pm on Saturday, April 17 to reports of a collision at High Street (A244), near the junction with Manor Lane, Feltham. 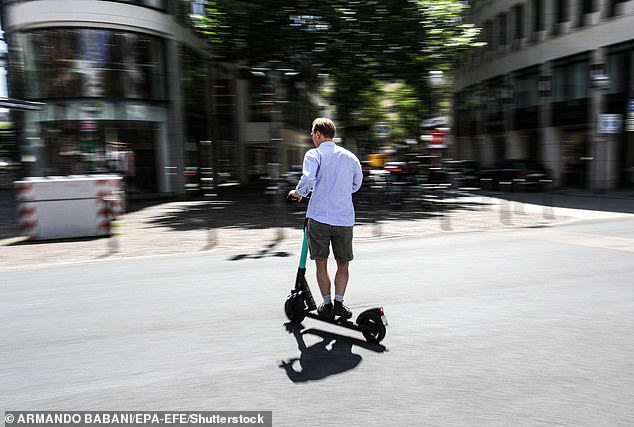 ‘Enquiries established that the child had been walking on the pavement with his grandmother when he was hit from behind by a person riding an e-scooter on the footpath.

‘The rider fell from the scooter on impact, but re-mounted and rode away without stopping at the scene.

‘The child was taken to hospital by LAS where he was found to have suffered two broken collarbones. He has since been discharged.’

According to the Department of Transport, it is illegal to ride privately-owned electric scooters on the pavement, roads and cycle paths.

You can only ride your own e-scooter on private land, with permission from the person who owns the land. 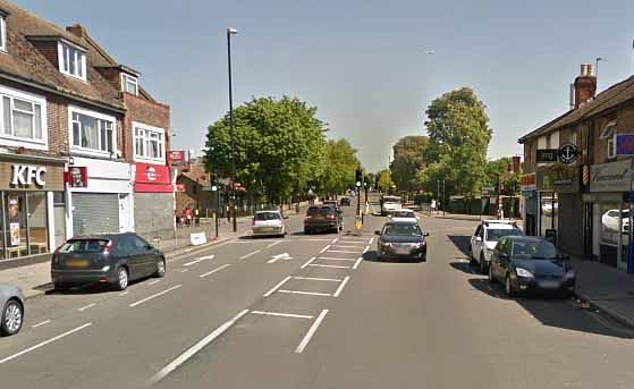 The boy, 3, was walking down the pavement in Feltham High Street (pictured) and was with his grandmother when he was hit from behind by the rogue e-scooter on Saturday afternoon

Last month, a teenager was banned from the roads for two years after he hit a six-year-old boy on a pavement in Leicester while travelling at 25mph, leaving him with serious facial injuries.

The teenager, who cannot be named for legal reasons, admitted a string of charges including causing a serious injury by dangerous driving.

It comes as London is set to launch a city-wide trial which would see riders permitted to ride rented e-scooters in specified locations across the capital.

Special technology will cap the scooters speed at 15.5mph and riders will not be permitted to use them on pavements.

Trial locations and e-scooters are in the process of being rolled out with Hounslow, where Feltham is located, expected to be one of the boroughs taking part.

What is the law on riding electric scooters in the UK?

E-scooters are classified as Personal Light Electric Vehicles (PLEVs), which means they are subject to all the same legal requirements including MOT, tax and licensing.

According to the Department of Transport, it is illegal to ride privately-owned electric scooters on the pavement, roads and cycle paths.

You can only ride your own e-scooter on private land, with permission from the person who owns the land.

Privately-owned e-scooters cannot be legally ridden on the roads because they don’t always have visible rear red lights, number plates or signal ability

Riding rental e-scooters on the roads and cycle paths became legal in the UK on July 4 last year but they are still illegal to ride on the motorway.

Riding these scooters on pavements will also remain illegal and will only be allowed in pre-approved locations where the hiring scheme is taking place. 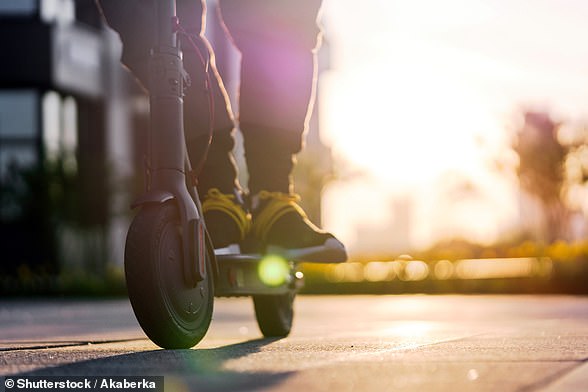 E-scooters are classified as Personal Light Electric Vehicles (PLEVs), which means they are subject to all the same legal requirements including MOT, tax and licensing

They will be limited to a maximum speed of 15.5mph.

E-scooter riders caught flouting the law could face a Fixed Penalty Notice for riding with no insurance, with a £300 fine and six penalty points.

Riders could also be issued with a Fixed Penalty Notice for driving without a licence, up to £100 fine and three-six penalty points.

The Government is currently conducting a trial of electric, or e-scooter, rental fleets in cities across the country with a view to legalisation.

Milton Keynes and Birmingham have successfully launched the scheme and last year York City Council announced it was working with Tier Mobility to deploy 50 e-scooters in the city.

In Coventry the scheme was axed after just five days when riders flouted rules by mounting pavements.

Another pilot in Hartlepool was scrapped before it even got started.

Up to 36 towns and cities have signed up to the Department for Transport’s 12-month scheme, which makes it legal to ride e-scooters on roads – however, they need to be rented and need to be capped at 15.5mph.