Four people had a fight in the middle of an Asda cereal aisle as horrified shoppers who were trying to keep their distance amid the coronavirus lockdown watched on.

The commotion kicked off at around 2pm in an Asda store in Dudley, near Birmingham, on Thursday.

The footage, which was shared online, shows two women tangled in a brawl as another woman tries to separate them before a man violently intervenes. 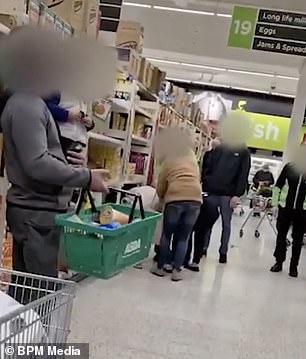 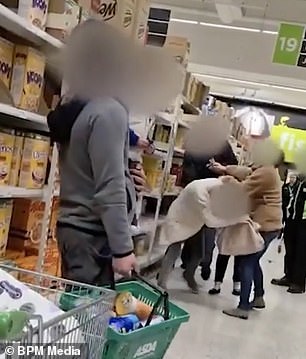 The video, filmed by another shopper, starts by showing the two women bent forwards as they pull at each other’s hair.

A third woman is seen trying to separate them before a middle-aged man, who had been standing next to the brawling pair alongside an Asda staff member, kicks out.

He shouts, ‘f***ing get off her!,’ and another series of expletives as he pushes the women apart.

A small child can be seen watching on as it sits in its father’s arms while he stands nearby.

Security staff are then seen storming into view to calm the man and the two women down, before the group walk away after finally ending the fight.

It is believed the fight was sparked following a domestic disagreement between two neighbours. 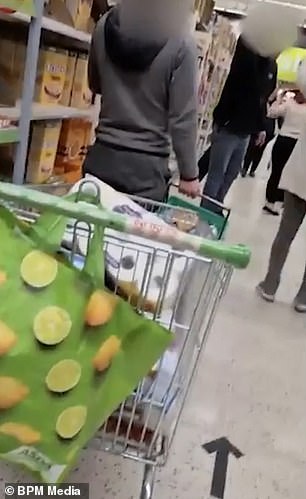 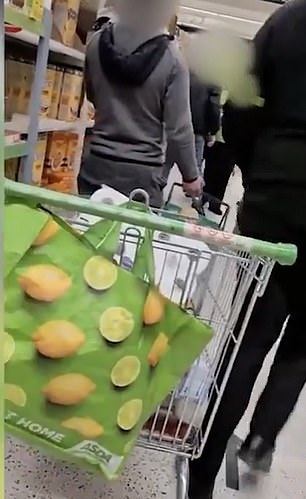 The commotion kicked off at around 2pm in an Asda store in Dudley, near Birmingham in the West Midlands on Thursday. The footage, which was shared online, showed two women tangled in a brawl as another woman tries to separate them before a man violently intervened

A witness, who did not want to be named, told Black Country Live: ‘One of them said, ‘it’s my neighbour she grabbed me by the neck.

‘My son has learning difficulties we can’t go out in our garden’.

‘They were fighting for a good 20 seconds before I started recording.

‘The bloke who intervened was nothing to do with them, he just snapped and starts kicking.

‘It kicked-off in the cereal aisle so the social distancing went out the window while everyone started poking their heads in.’

Appalled members of the community took to social media to express their shock at the disorder.

One Facebook a commenter said: ‘My mum should be able to work safely, without idiots fighting around her!’

Another added: ‘That’s awful, can’t believe people are behaving like that!’ 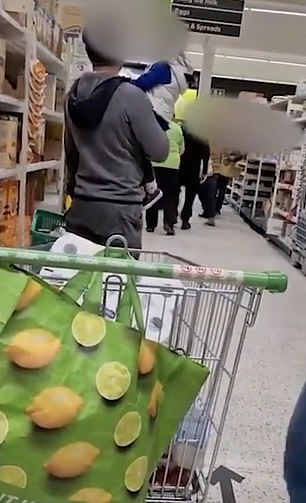 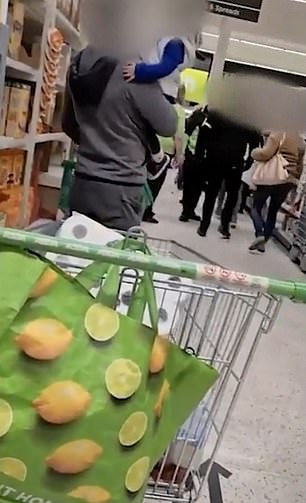 Security staff were then seen storming into view to calm the man and the two women down, before the group walk away after finally ending the fight

A spokesman for Asda confirmed a disorder between customers broke out and security staff intervened and the involved parties were ordered to leave the store.

He added: ‘We do not tolerate violence towards our customers or colleagues in our stores.

‘We ask our customers to be respectful of each other and our colleagues and to follow the social distancing measures we have put in place to help keep everyone safe.’

Shoppers visiting Asda supermarkets will see staff at the doors to maintain safe customer numbers to help with social distancing.

The chain said there is clear signage, directional barriers and floor markings to help customers move around stores easily and maintain a two-metre distance from other customers and staff.

According to its latest guidelines, the store is allowing customers to bring children and other members of the same household to stores but to keep this to a minimum to help maintain social distancing advice.

Customers are asked to only touch items they intend to purchase and to use cashless payment wherever they can to minimise contact.

Supermarkets have recently issued new advice to shoppers on rules, with some asking parents to leave children at home and others implementing rationing of certain items.