AN 82-year-old man has become the first person in the world to get the Oxford Covid jab – as the mass vaccination roll out began today.

Brian Pinker, a dialysis patient who describes himself as Oxford born and bred, received the jab at Oxford University Hospital at 7.30am. 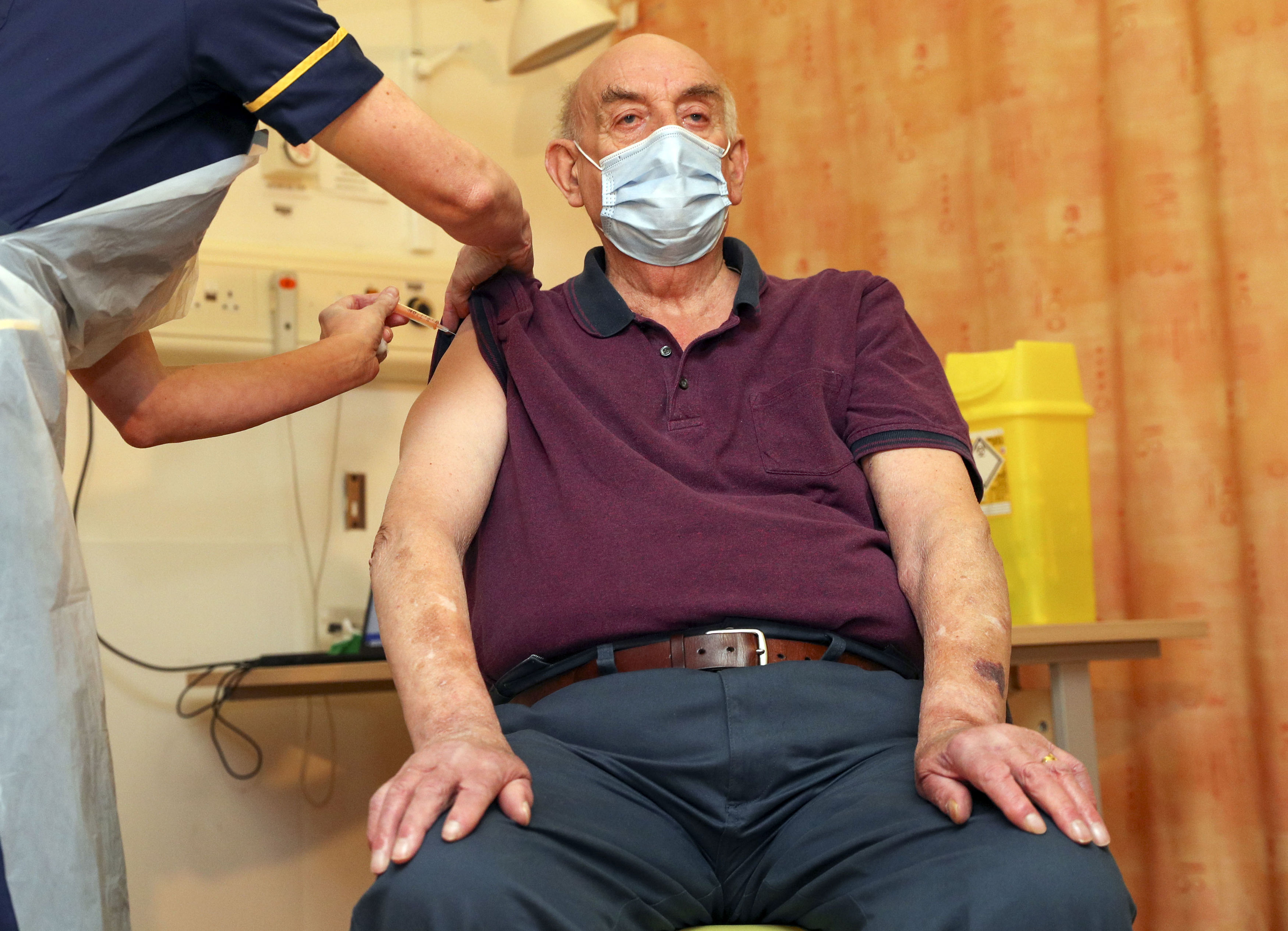 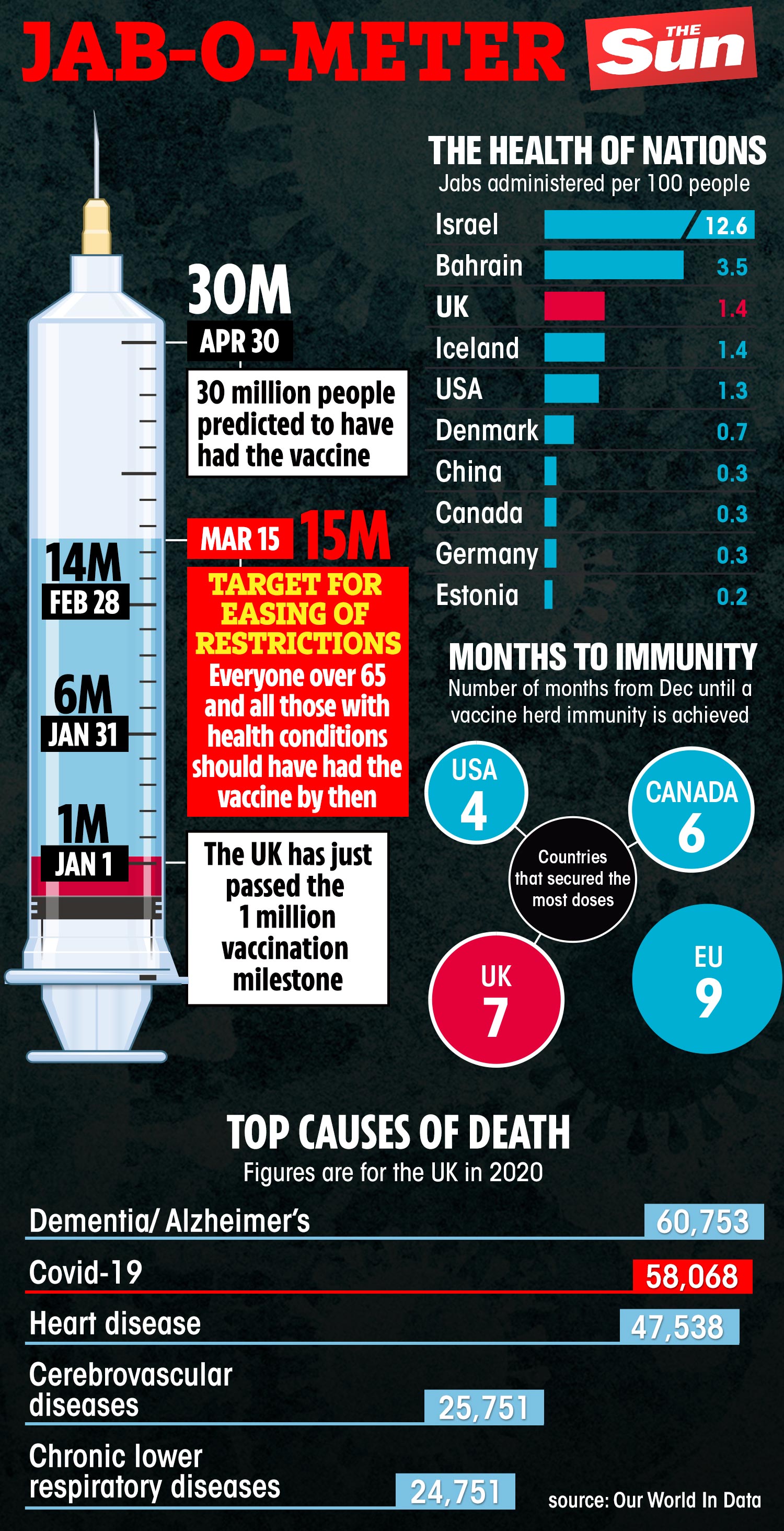 The retired maintenance manager said: "I am so pleased to be getting the Covid vaccine today and really proud that it is one that was invented in Oxford.

"The nurses, doctors and staff today have all been brilliant and I can now really look forward to celebrating my 48th wedding anniversary with my wife Shirley later this year."

Sam Foster, Chief Nursing Officer at Oxford University Hospitals NHS Foundation Trust, who administered the vaccine to Mr Pinker, said: "It was a real privilege to be able to deliver the first Oxford vaccine at the Churchill Hospital here in Oxford, just a few hundred metres from where it was developed.

"We look forward to vaccinating many more patients and health and care staff with the Oxford vaccine in the coming weeks which will make a huge difference to people living in the communities we serve and the staff who care for them in our hospitals."

Also among the first to have the vaccine since it was approved for use was Professor Andrew Pollard, who is the director of the Oxford vaccine group.

Prof Pollard said: “It was an incredibly proud moment for me to have received the actual vaccine that the University of Oxford and the AstraZeneca teams have worked so hard to make available to the UK and the world.

"As a paediatrician specialising in infections, I know how important it is that healthcare workers along with other priority groups are protected as soon as possible – a crucial role in defeating this terrible disease.”

He told Sky News today: "It isn't about blame, it's about how we collectively, as a society, keep this under control for the next couple of months… until the vaccines can make us safe."

Boris Johnson pledged to vaccinate tens of millions within three months and said: “We can see how we are going to get out of this with great clarity now.”

Five thousand troops will begin “Operation Freedom” — with 530,000 Oxford/AstraZeneca jabs ready to roll out in the war on coronavirus.

Hospitals at six NHS trusts across London, Brighton, Oxford, Morecambe and Nuneaton will be the first to give the vaccine.

It will reach more than 500 GP surgeries and community centres by the end of the week — with PM Boris Johnson saying “we are going as fast as we can”.

Professor Stephen Powis, national medical director of NHS England, described the rollout of the Oxford/AstraZeneca vaccine as "another turning point in our way out of this pandemic".

He told BBC Breakfast today: "Four weeks ago I had the privilege to be in Coventry for the first jab of the Pfizer vaccine – remember Maggie Keenan got that first jab – that felt like a huge moment in this pandemic and, to be honest, today, when I saw the first jab in the building behind me of the AstraZeneca vaccine, felt like an even bigger moment, another turning point in our way out of this pandemic."

He continued: "We've been preparing in the NHS for many months for the biggest vaccination programme in our history.

"We've already delivered over a million vaccines of the Pfizer jab; now we've got the AstraZeneca one, so we aim to get it into people's arms as quickly as it is supplied to us.

Asked what AstraZeneca has said about supplies, Prof Powis said: "As the Prime Minister said, we're aiming for tens of millions of doses by the time we get to April.

"This is a new vaccine, each batch will need to be looked at before it's released, so that schedule will become clearer over the next few weeks, but, as I said, we are raring to go."

Britain has ordered 100million doses of the new vaccine, enough for 50million people.

It can be stored in a fridge making it easier to get into care homes and GP surgeries.

Along with the 40million doses of the Pfizer treatment, we will have enough to protect the entire population.

The Army will play a key role in today’s roll-out with Defence ­Secretary Ben Wallace hailing its impact.

A total of 21 teams will support seven regions of NHS England in giving the new vaccine. And 800 Army personnel will boost mass testing in Manchester. 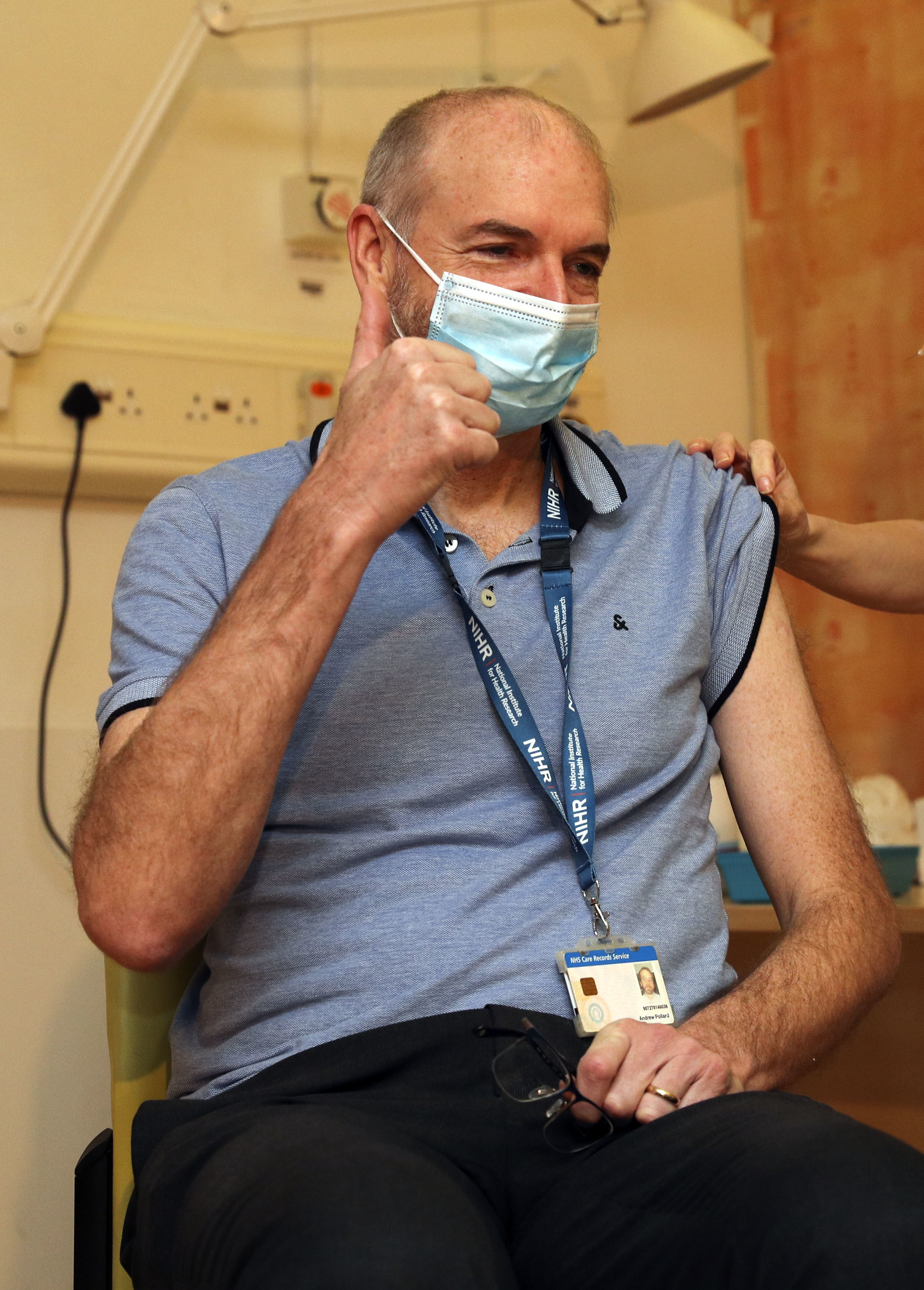 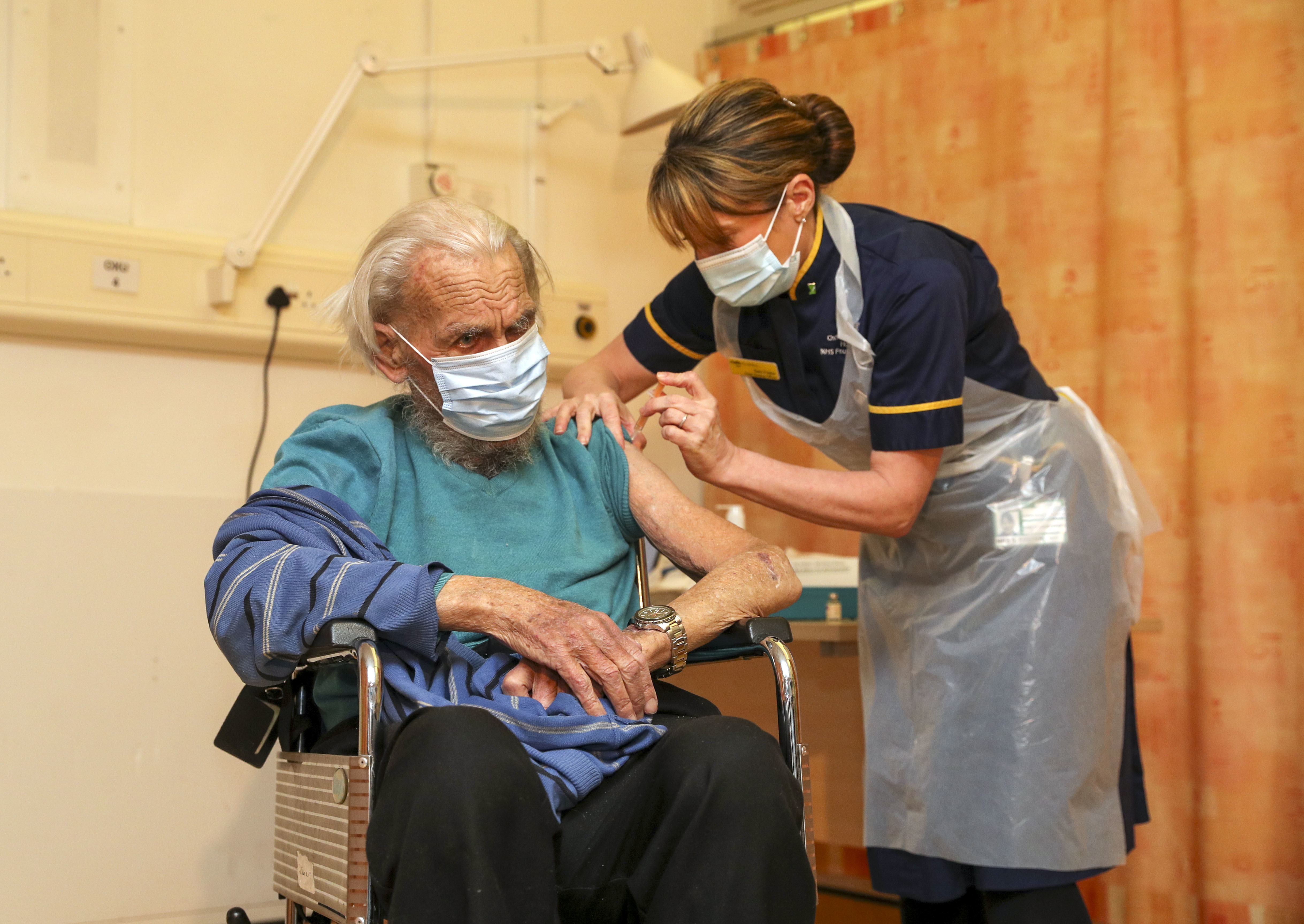 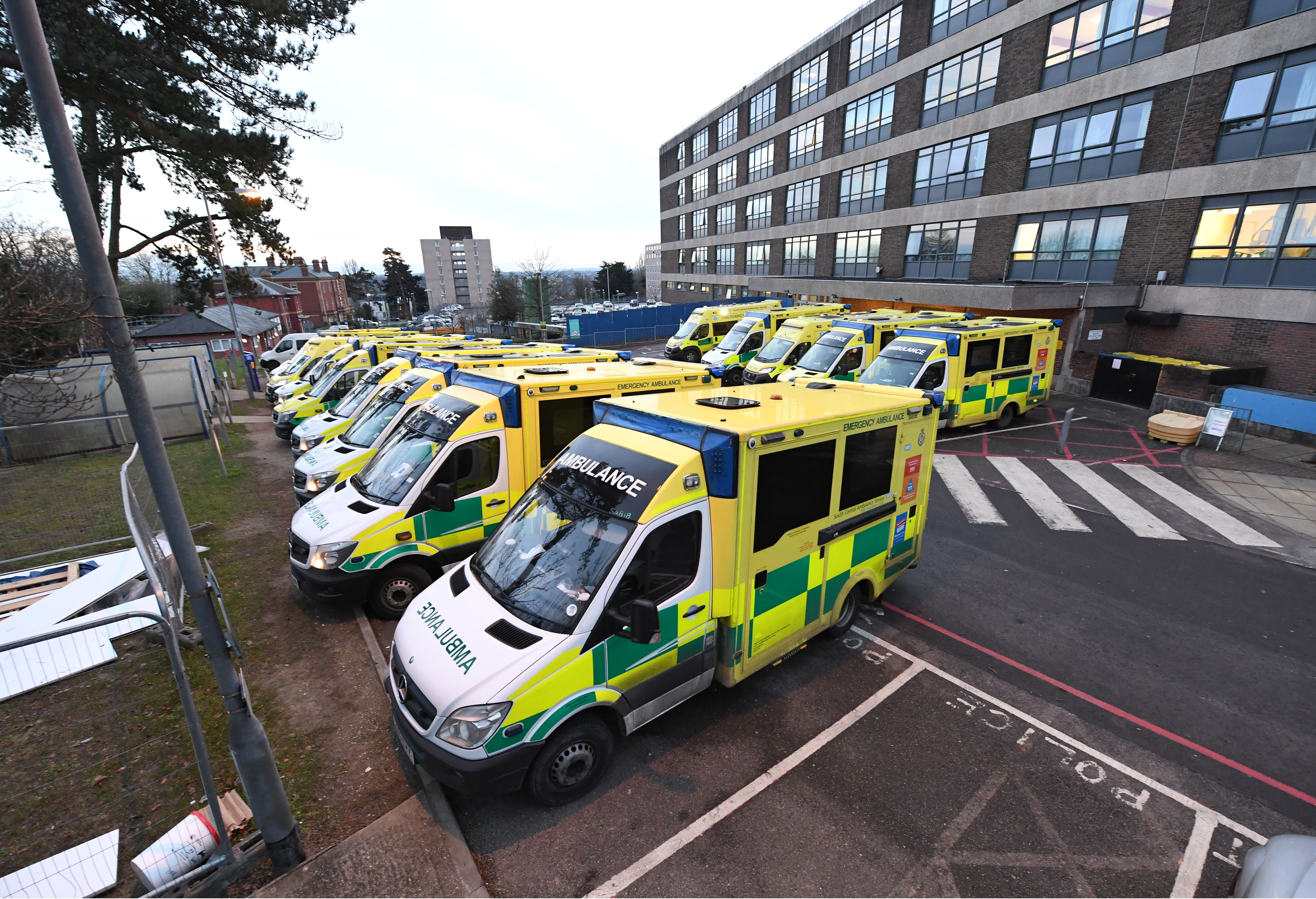 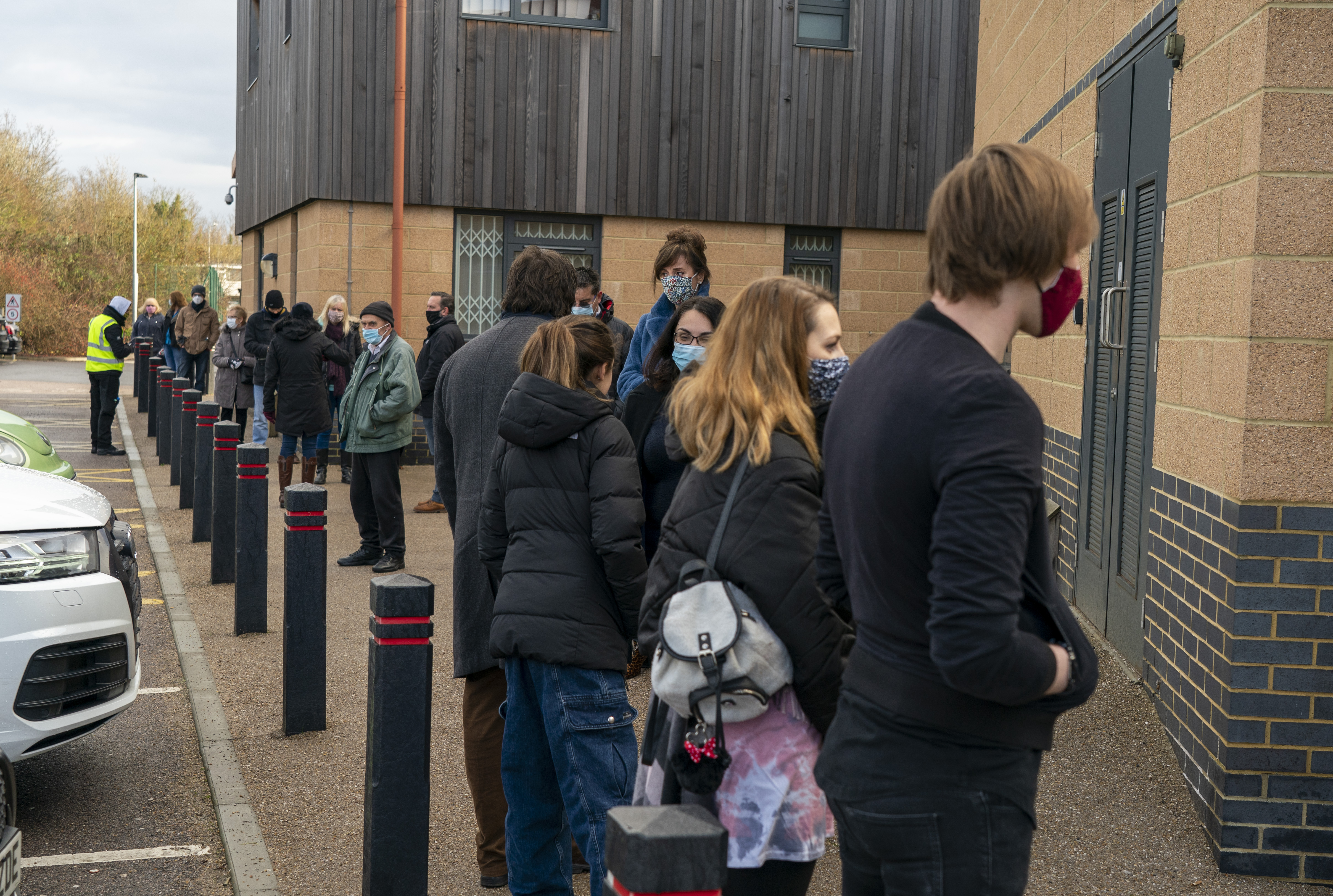 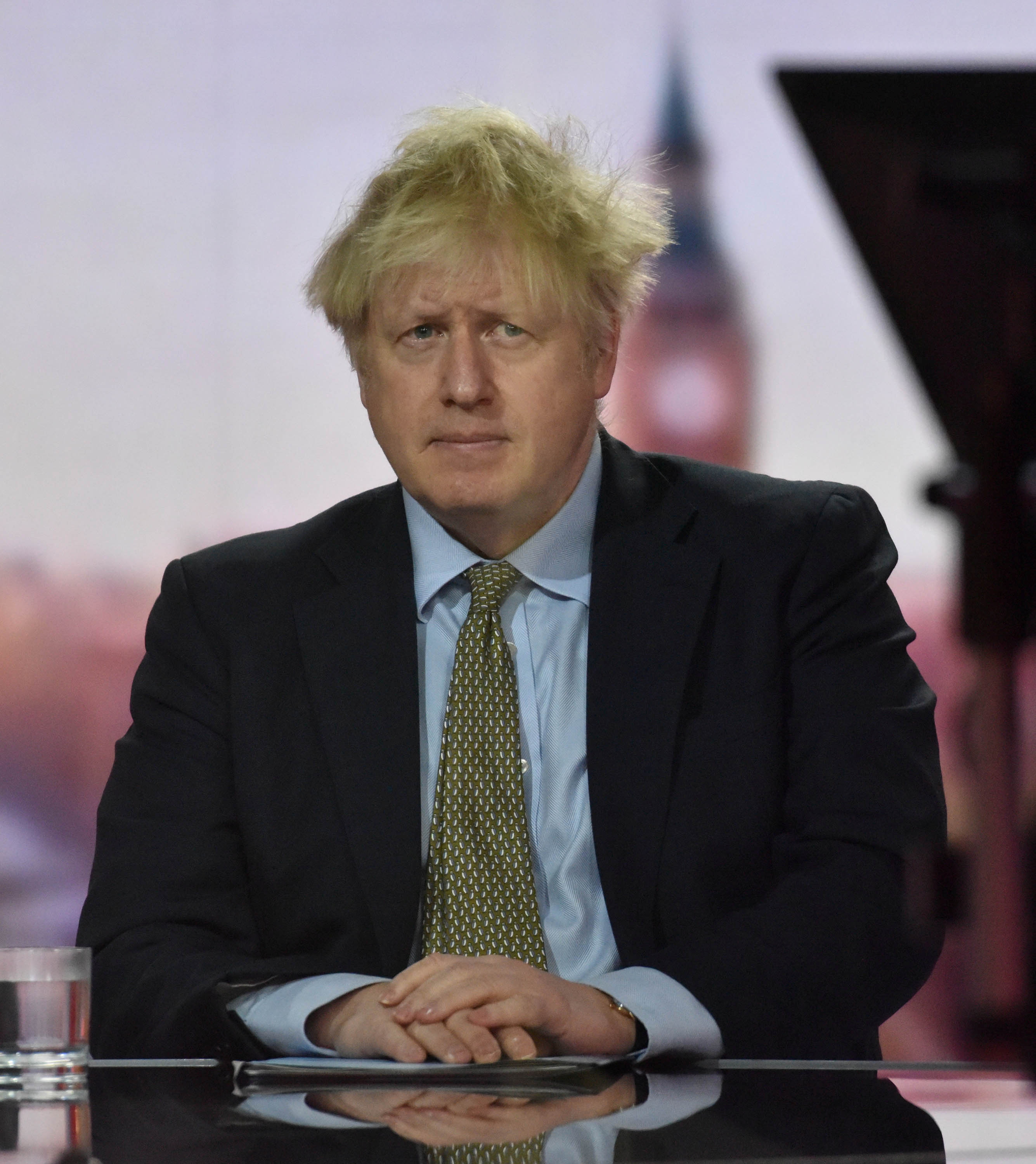 The 5,000 total — including 2,000 newly deployed this week — will be working in Kent, Kirklees in Yorkshire, across Lanca­shire and in Swadlincote, Derbyshire.

The PM again backed The Sun’s Jabs Army plea for volunteers to help the operation. And he revealed he and Health Secretary Matt Hancock are working to tear up red tape so retired doctors can inject Brits.

Mr Hancock said: “I’m delighted that today we are rolling out the Oxford vaccine, a testament to British science.

“This is a pivotal moment in our fight against this awful virus and I hope it provides renewed hope to everybody that the end of this pandemic is in sight.”

His comments came as alarming analysis showed 13million — a quarter of England’s population — live in areas with no jab centres ready. And up to eight million face a ten-mile round trip to get to a site.

Bedford, Newark and Braintree — with a combined population of 330,000 — have no sites.

Nottingham, with 335,000 people, has just its main hospital, says the analysis of 697 centres in England.

London, where cases are sky-high, averages eight sites for every million people. 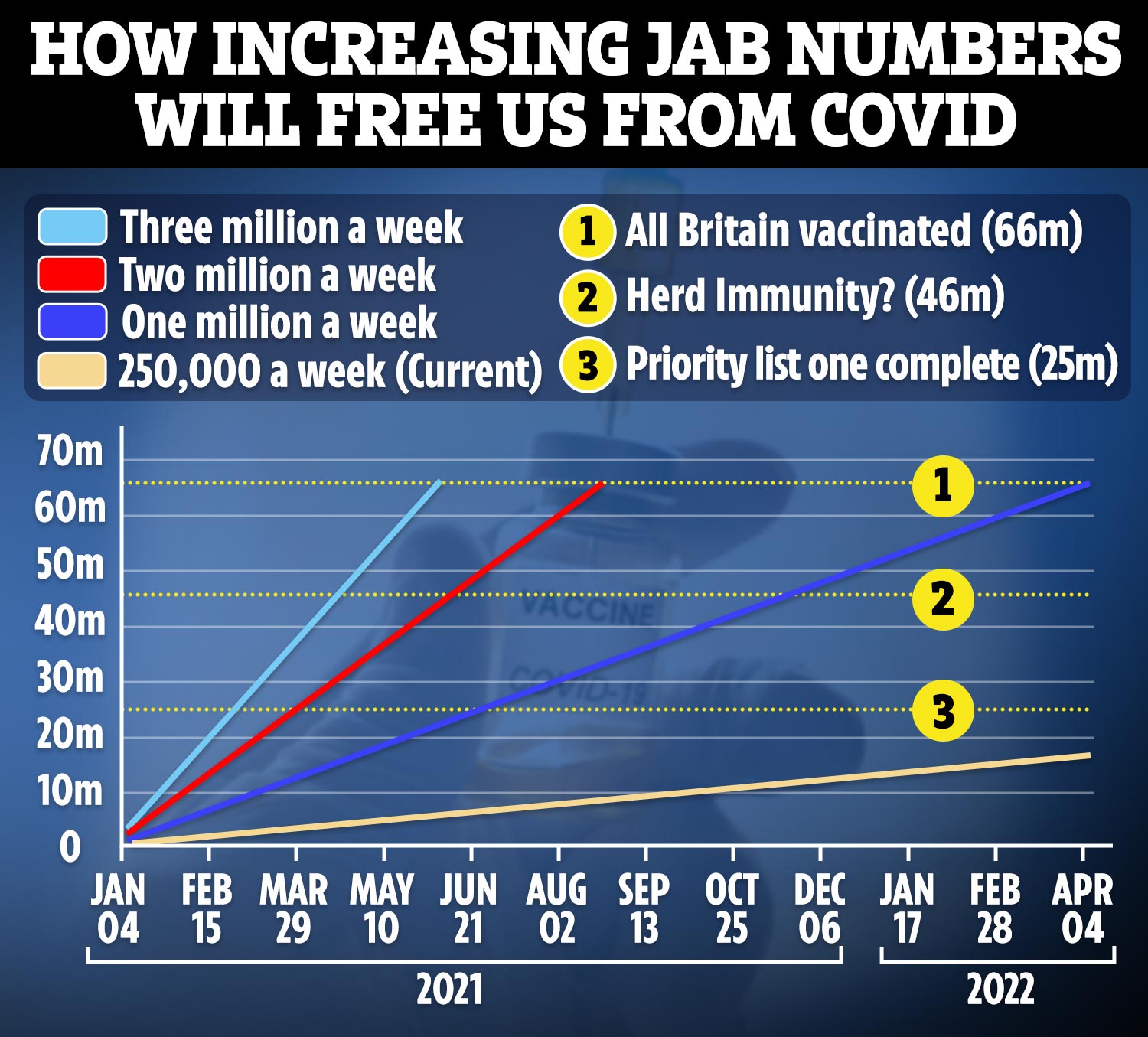 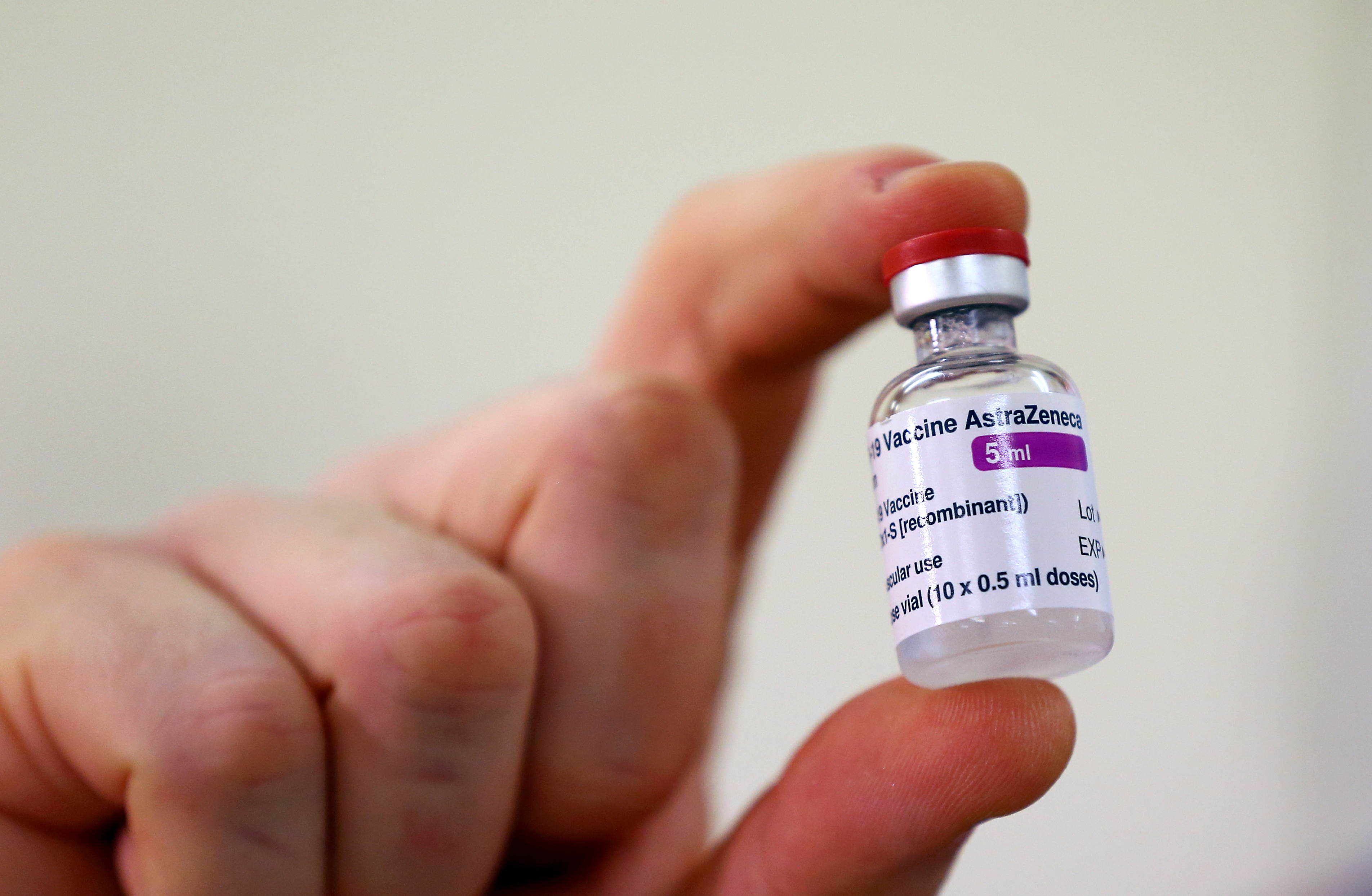 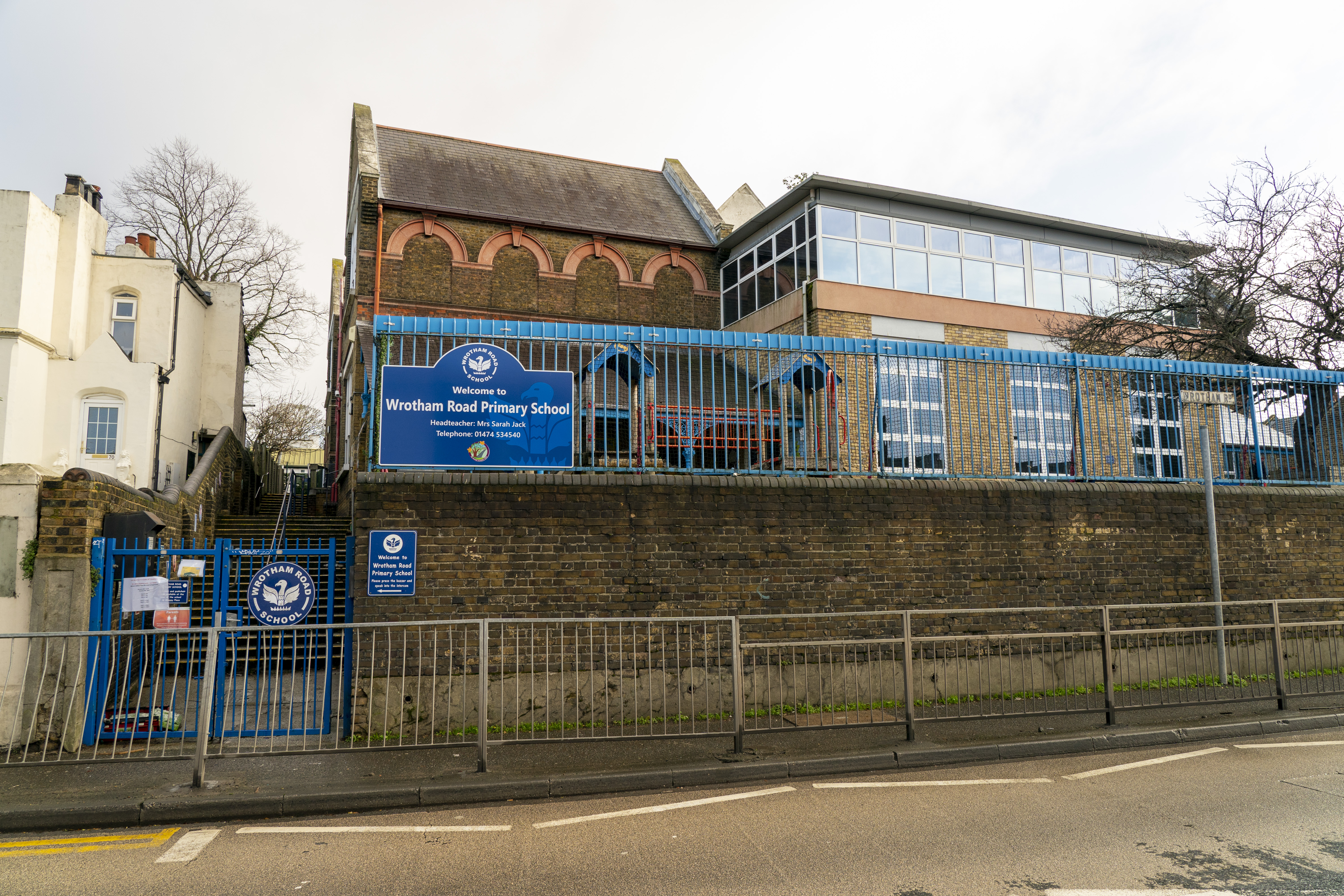 Meanwhile primary schools start back after the holidays today but the PM admitted restrictions are “about to get tougher” — with Tier 5 likely on the way.

Many schools resume today but asked if a Tier 5 was on the cards, the PM said the system is “probably, alas, about to get tougher”.

He added: “Until the vaccine really comes on stream in a ­massive way, we’re fighting this virus with the same set of tools.”

He told Times Radio: “We should be aiming to get up to three, four, five million a week.”,

Labour leader Sir Keir Starmer said the nation should be plunged into a full national lockdown within 24 hours to help stem the tide.

He added: “The virus is clearly out of control and there’s no point the Prime Minister hinting that further restrictions are coming to place in a week or two or three.

“That delay has been the source of so many problems so I say bring those restrictions now, within the next 24 hours.”

Prof Sir Mark Walport, of the Scientific Advisory Group for Emergencies (Sage), said: “It is clear we are going to need more.”

And Chris Hopson, of NHS ­Providers, demanded “appropriate restrictions” after hospital admissions shot up since Christmas.ImageUpload an image file, pick one from your media library, or add one with a URL.UploadMedia Library

The vaccine is a brilliant example of British scientific expertise, determination and ingenuity in the face of adversity.

It gives hope not just to the people of this nation but to the world.

We should be mightily proud of Prof Sarah Gilbert and her team of vaccinologists, as we are proud of the thousands of Sun readers who have already stepped forward to join our Jabs Army.

It is vital that we get the life-saving vaccines out to as many people as possible, as quickly as possible, and those selfless volunteers stand ready to help in this huge logistical task.

The vaccines are our road to freedom; our means of escape from the tyranny of this dreadful disease.

In the meantime, cases are rising alarmingly and our heroic health workers are under huge pressure.

So there may yet be a need for more and tougher restrictions before we return to the normality that we crave.

But, rest assured, we will get there.SHUT DOWN What is 'Tier 5' and what could the lockdown rules be?'LOSE EVERYBODY IN ONE NIGHT' Tragic pics of sisters gunned down by 'domestic abuser' dadSUPER SPREADER Covid vaccines 'may not work on even faster spreading South African strain'JABBY MONDAY First of 530,000 Oxford jabs to be rolled out today in war on Covid'DO WHAT IT TAKES'Boris to decide TODAY if England goes into lockdown & schools closedZARA RAP Zara Holland could face YEAR in jail after breaching Covid laws in Barbados

He added: “They need to make sure they adhere to these precautions because this virus is very transmissible.

“And even though the NHS will move as fast as possible, two million vaccinations a week — if we can get to that level — is still going to be slow to provide the level of immunity that will start to impact on hospital admissions.” 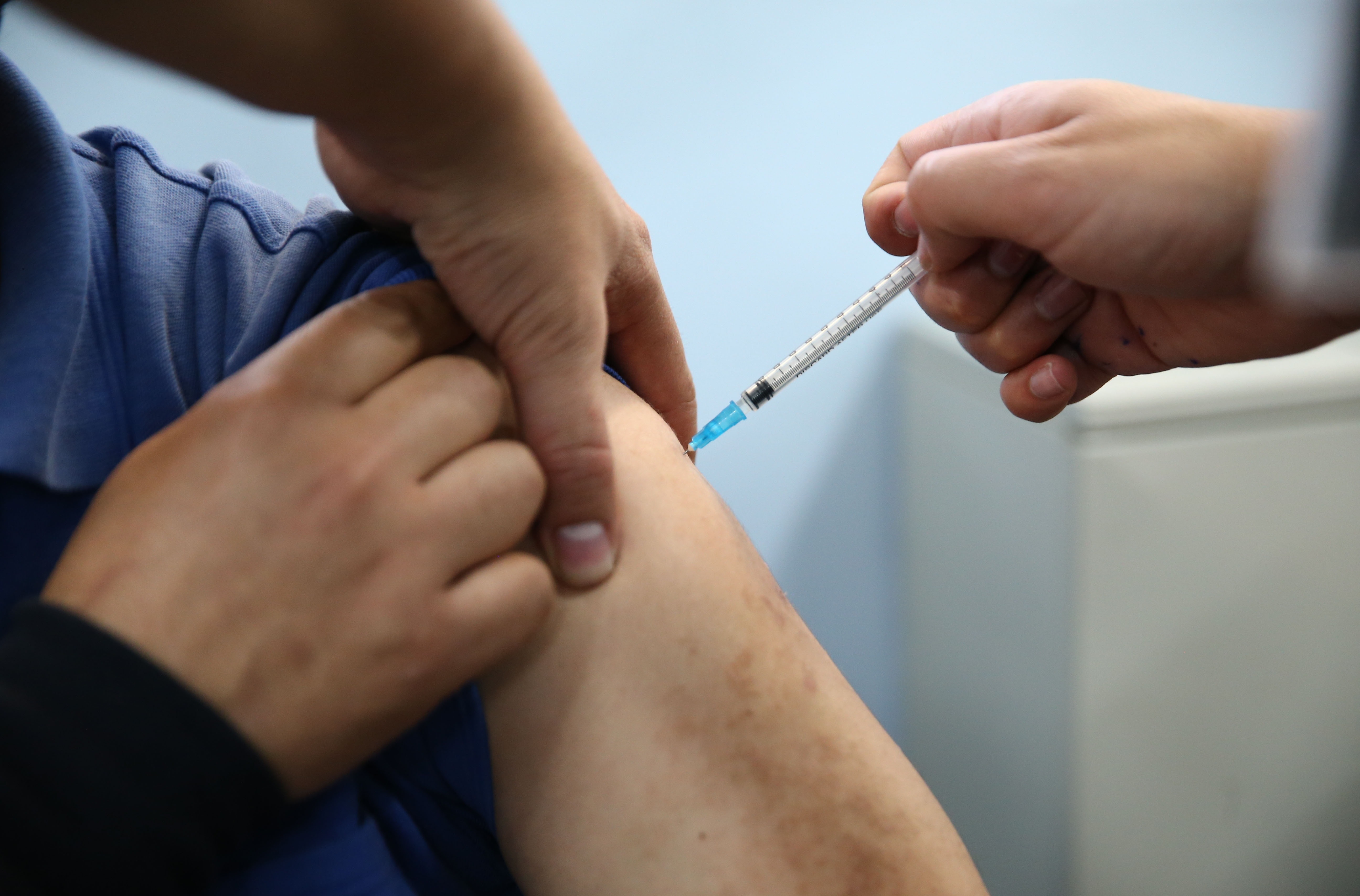 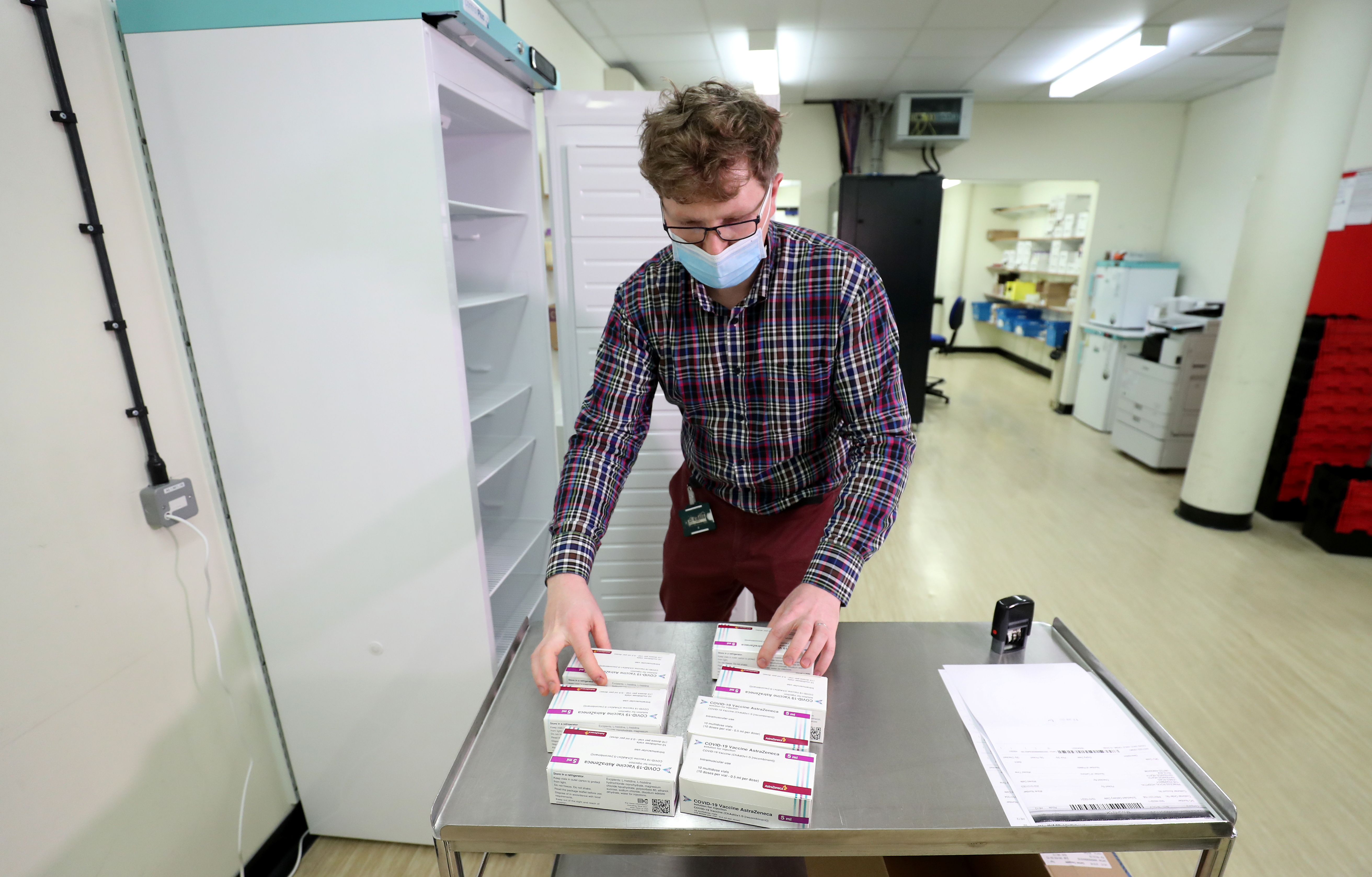