It is looking like scary weather ahead as torrential downpours lash the nation over Halloween weekend and bring threats of severe flooding along the west coast of the UK.

The Met Office has issued a warning saying that parts of western England and wales will be hit by strong winds and heavy rain in the coming days.

Up to four inches of rain is set to fall across some parts of the country, meaning Halloween will be a total washout.

Homes and businesses are expected to be flooded, while power supplies are also likely to be affected, the Met Office said.

Britain is being hit by the tail end of the tropical Hurricane Zeta, which has ploughed across the Atlantic Ocean in recent days.

The deluge hitting Britain this weekend is caused by the tail end of the tropical storm, which has travelled north-east from the Gulf of Mexico.

Over the weekend two separate Atlantic low-pressure systems will track to the north-west of the UK, bringing further heavy and persistent rain as well as strengthening south-westerly winds.

A couple in Southsea, Hampshire, were spotted getting soaked by spraying waves as they tried to take a selfie together againsy the dramatic backdrop. 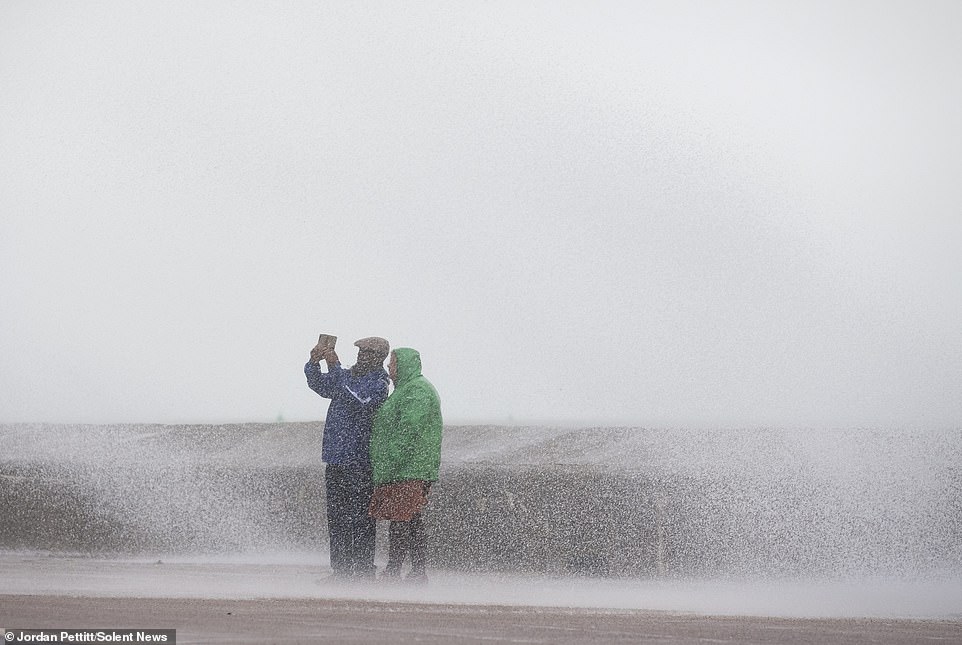 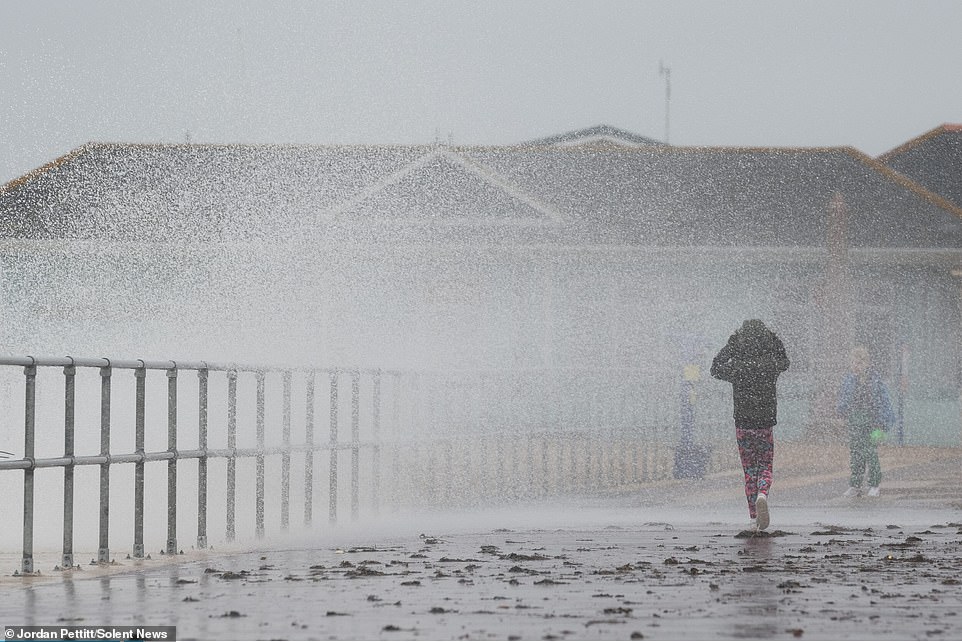 A yellow weather warning is in place for heavy rain and wind this weekend as the tailend of Hurricane Zeta hits the UK. Pictured: Children get soaked by the enormous waves battering the coastline this morning at Southsea 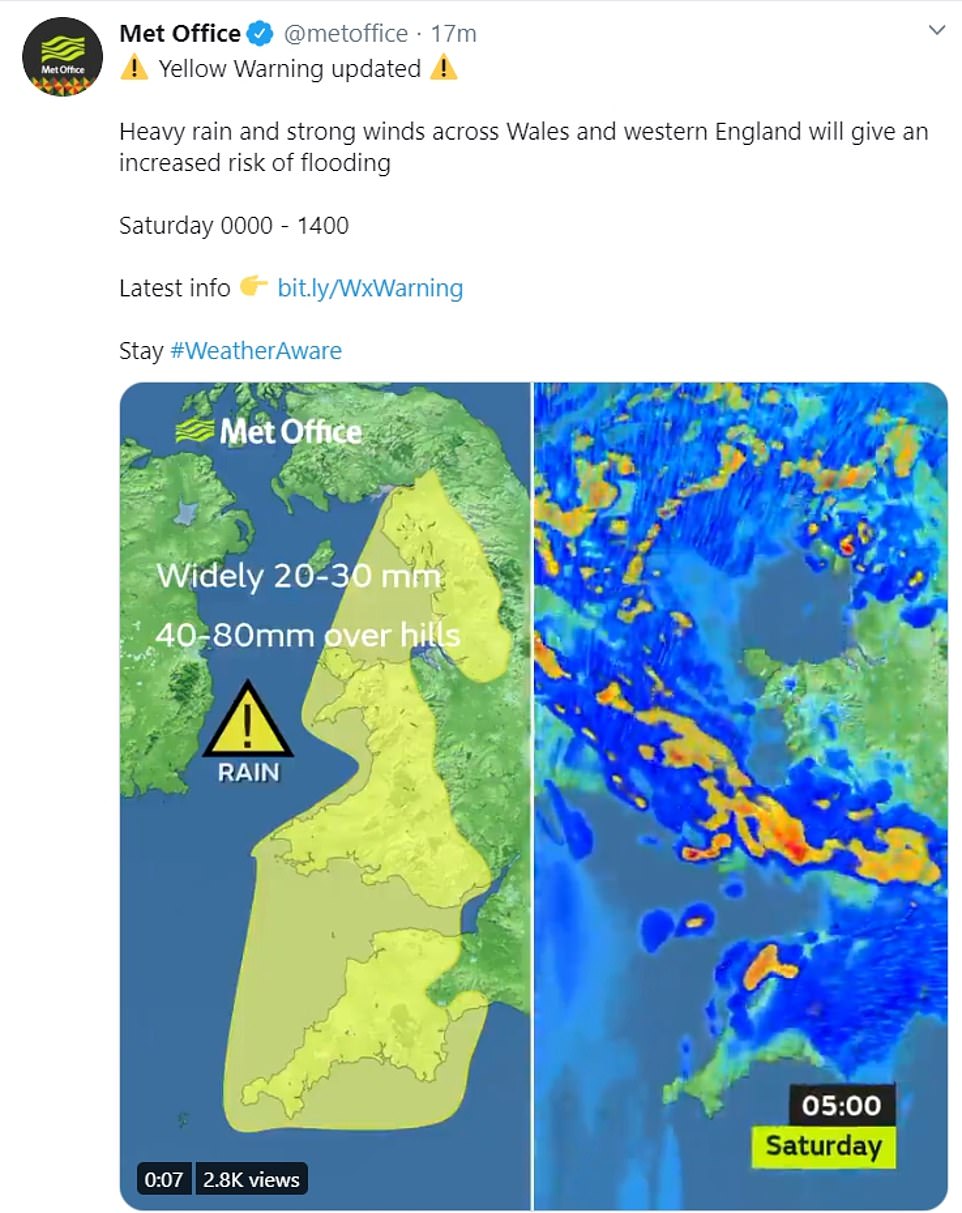 The Met Office has issued several yellow weather warnings ahead of the weekend, and urged people to take care amid the high risks of flooding

A yellow weather warning promises stong winds across the entirety of the west coast of Britain, including Cornwall, Devon, Wales, Northern Ireland and Scotland, on Saturday.

The south west, Wales and Scotland can also expect heavy rain rolling in off the Atlantic Ocean.

Issuing a yellow rain warning, the Met Office said: ‘Periods of heavy rain on Saturday may lead to flooding and disruption to transport.’

They warned that ‘flooding of businesses and homes is likely’ and power supplies were likely to be affected by the rain and wind.

Their warning added that spray and flooding on roads would make travel and journey times much longer.

On Sunday the storm will ease slightly, with northern Scotland experiencing high winds and the coastline stretching north from Wales to the Scottish borderset for rain.

Yellow weather warnings remain in place for these locations on Sunday, while the coastal rain warning for that area extends into Monday.

Deputy Chief Meteorologist, Martin Young, said: ‘Saturday will be very wet and windy for many northern and western parts of the country as low-pressure sweeps northeastwards past northwest Britain.

‘Another system quickly follows on Sunday that contains the remnants of ex-Hurricane Zeta, bringing further heavy rain and strong winds.

‘Given that this is falling on already saturated ground from what has been a wet October, there is an increased risk of flooding in some warnings areas.’ 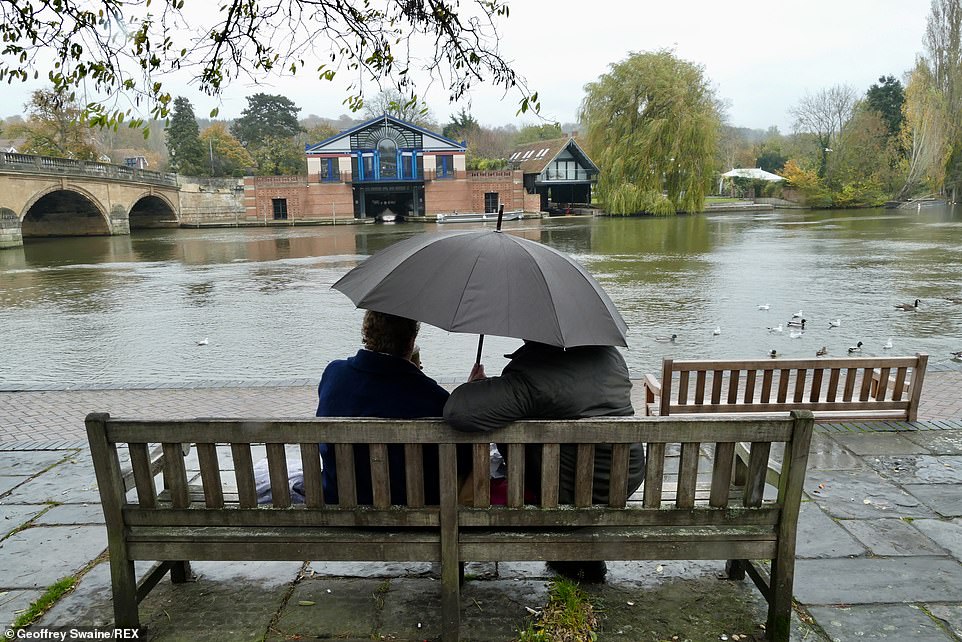 A couple sit under an umbrella on a bench along the Thames Path in Henley on Thames, Oxfordshire, ahead of the weekend washout 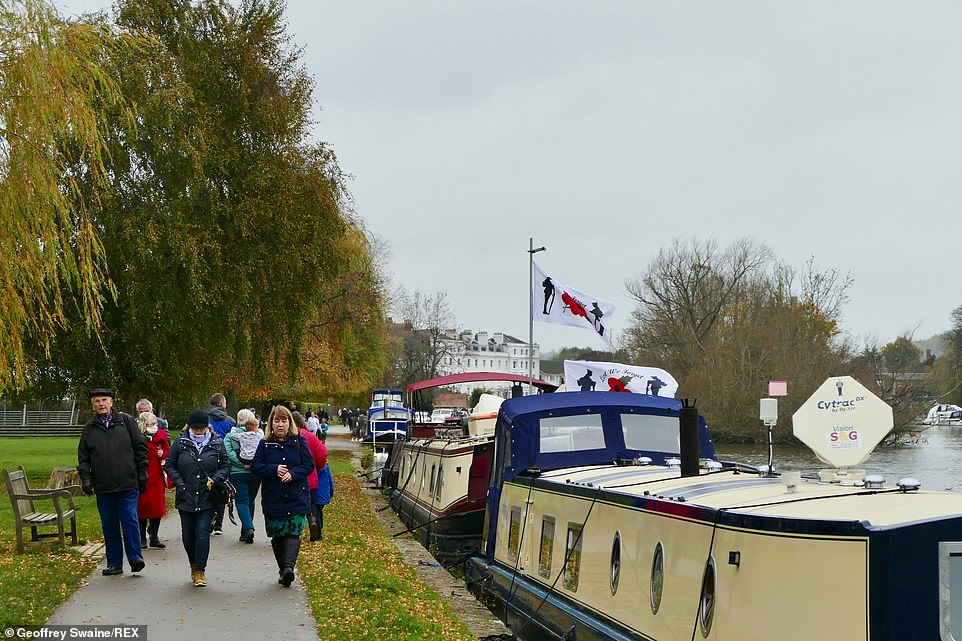 The skies were grey and overcast in Henley on Thames, Oxfordshire, as Britain braces itself for torrential rain over Halloween 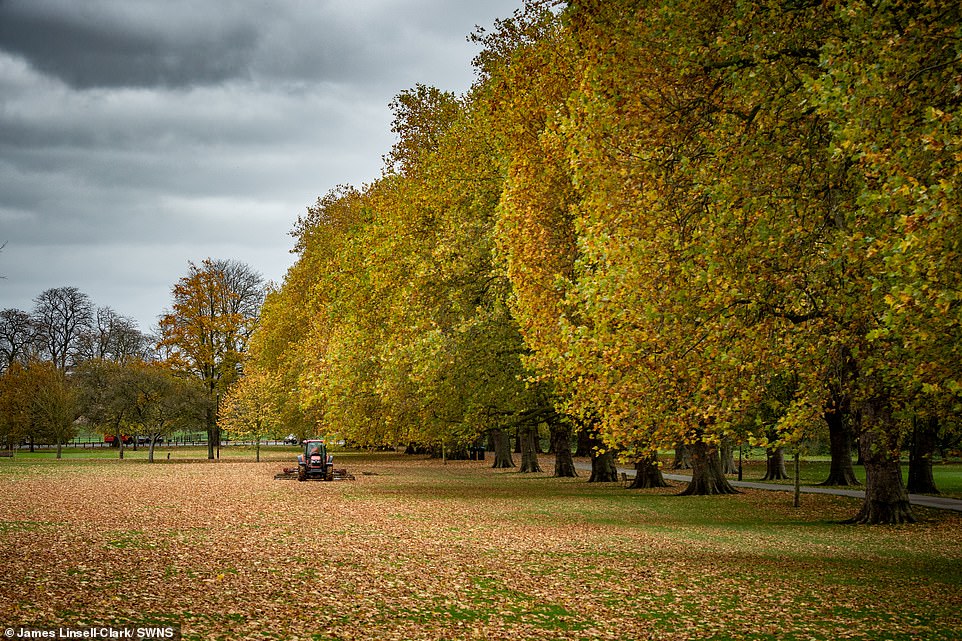 Th country has been battered by the tail end of tropical Hurricane Zeta all week, with Friday seeing the only break in the weather with eastern, central and southern areas were mostly dry and bright. Pictured: A carpet of autumn leaves in Cambridge

The weather created by tropical Hurricane Zeta has been battering the UK all week. On Thursday, the River Conwy burst its banks – causing major flooding at Llanrwst in North Wales – and gigantic waves will hit the Atlantic coast as the remnants of Hurricane Epsilon join with a deep area of low pressure near Iceland.

Friday saw a temporary respite when eastern, central and southern areas were mostly dry and bright.

Met Office Chief Meteorologist Frank Saunders said yesterday: ‘This week has been fairly unsettled and we’ll see this typical autumnal weather continuing over the weekend, with heavy rain and strong winds expected to bring disruption and risk of flooding to some areas.

‘Several yellow rain warnings are in place from Thursday until Sunday, covering parts of northwest England, Wales and western parts of Scotland.

‘Across the warning areas rainfall totals of 30-40mm can be expected quite widely by the end of Friday, whilst over the hills and mountains of north Wales and Cumbria, where rain will be heaviest, more than 100mm is possible.’

Road operator Bear Scotland had already announced that the A83 at the Rest and be Thankful in Argyll – hit by a landslide in August – will remain closed overnight until late November.

This is because of fears of the risk of further movement in the mountain above the road.

A diversionary route will be available from 6pm each night via the Old Military Road.