Britain records 15 more coronavirus deaths in the preliminary toll — taking the official number of victims to 46,314

Department of Health chiefs have yet to confirm the final daily figure, which is often much higher because it takes into account lab-confirmed fatalities in all settings.

The early count — which only includes a fraction of the Covid-19 deaths in England — is calculated by adding up updates declared by each of the home nations.

NHS England today declared 13 victims in hospitals across the country. Wales recorded two in all settings. No fatalities were registered in Scotland or Northern Ireland.

For comparison, 89 deaths were officially recorded yesterday and 83 were declared last Wednesday. Around 60 Brits are now succumbing to the life-threatening infection each day, on average.

In other developments today: 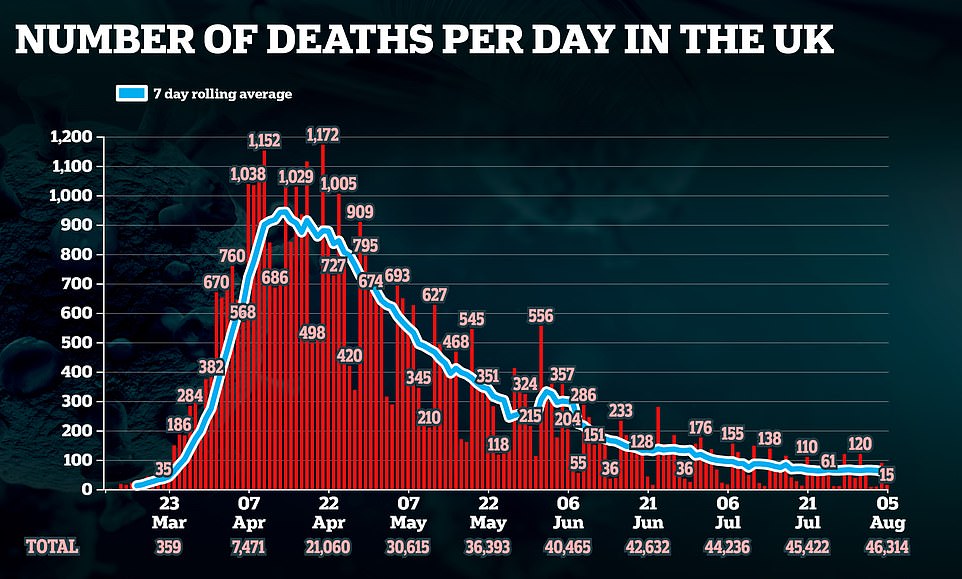 The UK also recorded another 89 deaths, meaning 60 people are dying a day on average. Just nine deaths were recorded yesterday — but counts are always lower on Mondays because of a recording lag at weekends. For comparison, Government figures show 119 victims were announced last Tuesday

Department of Health chiefs yesterday announced that another 670 people tested positive for the virus, taking the rolling seven-day average to 802.

It was the first time the rate had been above 800 since July 2. For comparison, the rate was 697 last Tuesday and has been on the up for more than a fortnight amid growing fears of a resurgence.

Government statistics show the official size of the UK’s outbreak now stands at 306,293. But the actual size of the outbreak is estimated to be in the millions, based on antibody testing data.

The deaths data does not represent how many Covid-19 patients died within the last 24 hours — it is only how many fatalities have been reported and registered with the authorities.

And the figure does not always match updates provided by the home nations. Department of Health officials work off a different time cut-off, meaning daily updates from Scotland and Northern Ireland are out of sync.

The count announced by NHS England every afternoon, which only takes into account deaths in hospitals, does not match up with the DH figures because they work off a different recording system.

For instance, some deaths announced by NHS England bosses will have already been counted by the Department of Health, which records fatalities ‘as soon as they are available’.

But the fatality curve is no longer flattening as quickly as it was, with the rolling seven-day average number of daily deaths having been in the sixties since July 18.

It can take infected patients several weeks to die, meaning any spike in deaths won’t be immediately apparent in government figures.

ONS figures — released every Tuesday — revealed overall deaths are still below the number usually expected at this time of year, based on an average from the previous five years.