Britain sizzles in 86F heat on hottest day of the year so far before 63 HOURS of thunderstorms bring threats of flooding, power cuts and commuter chaos tonight

Britons are set to enjoy the hottest day of the year so far today as the country sizzles in 86F (30C) heat before the weather changes dramatically overnight with ‘intense’ thunderstorms moving in.

Some areas will be hotter than top European holiday destinations including Ibiza, St Tropez and Mykonos – with today being the 21st day in a row that maximum UK temperatures have got to at least 70F (21C).

This afternoon, the mercury in South East England is expected to exceed the 85.5F (29.7C) recorded at Bushy Park in Teddington, South West London, on Monday which is currently the hottest day of 2021 so far.

However, the Met Office has issued yellow warnings of thunderstorms lasting 63 hours from 6pm tonight until Saturday morning, stretching across large parts of England, including London and the South East.

And an allergy expert warned people with hayfever, who have suffered from sneezing and streaming eyes amid very a high pollen count in recent days, face fresh misery with the storms threatening so-called ‘thunder fever’. 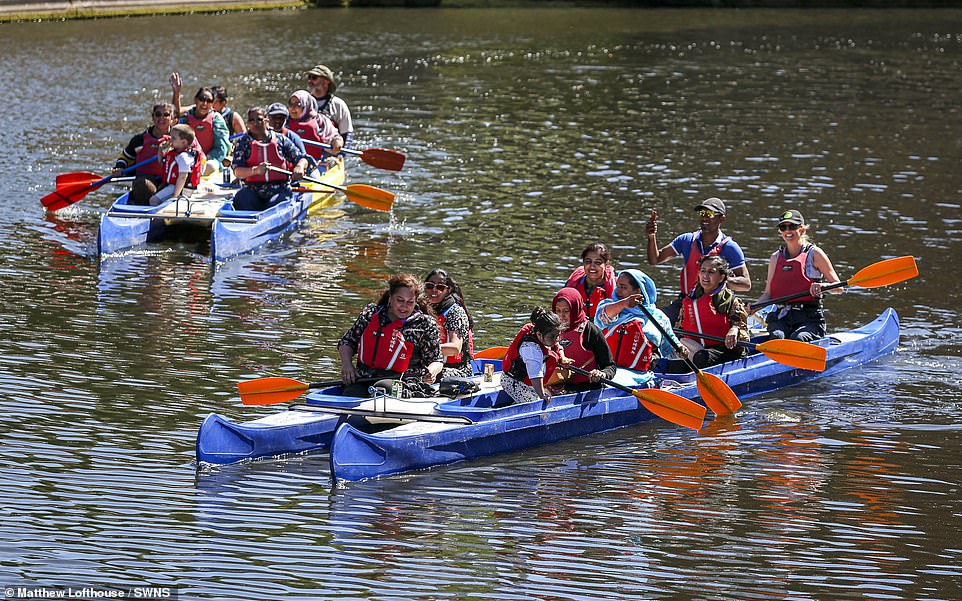 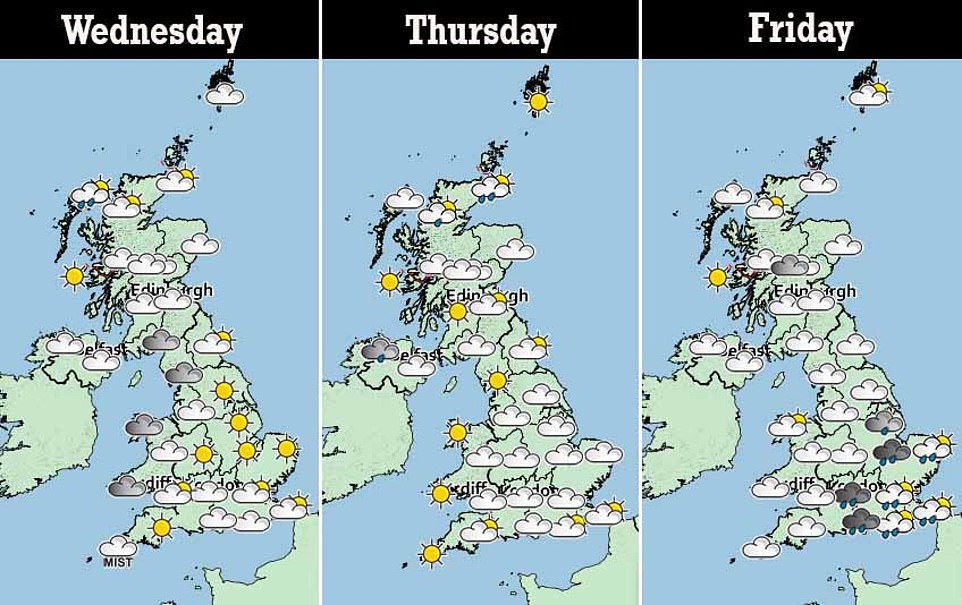 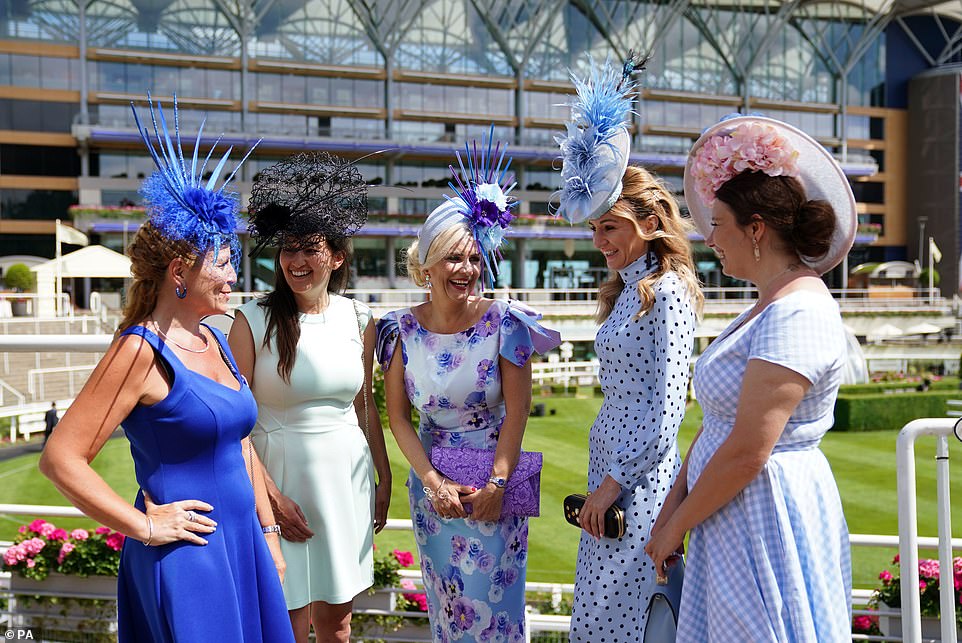 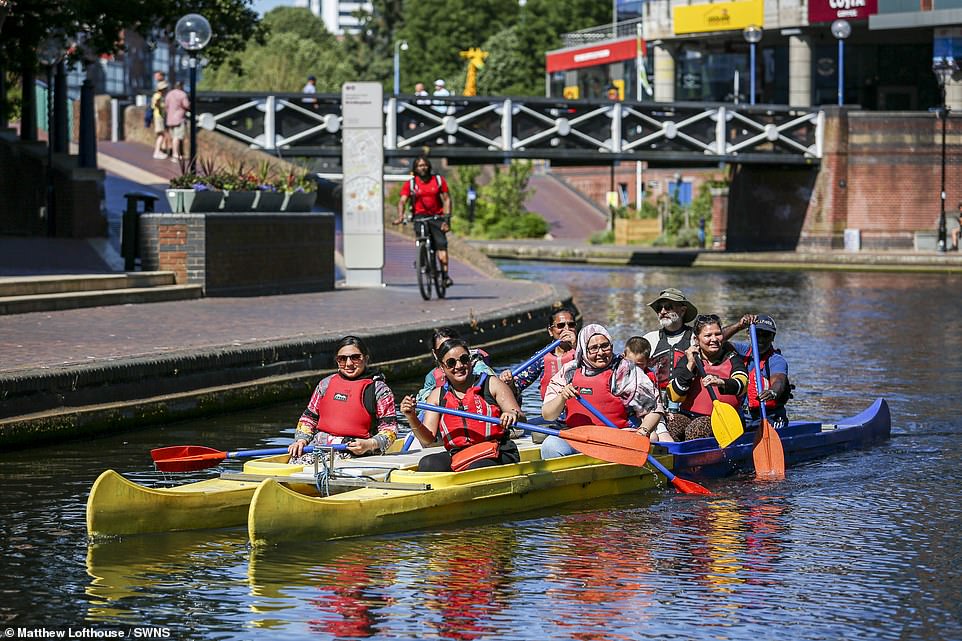 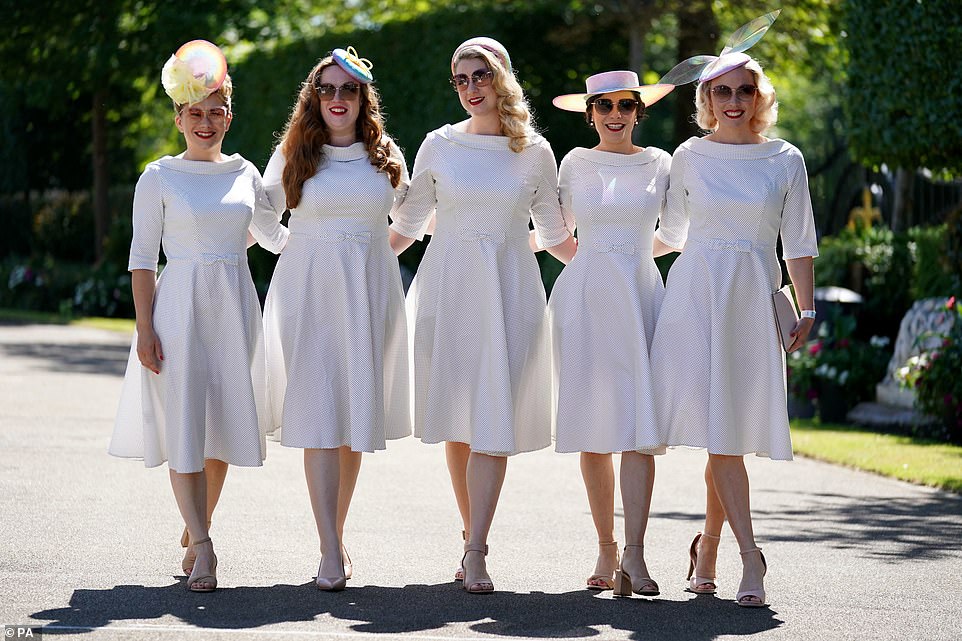 The Tootsie Rollers, who are described as a ‘retro girl band’, in the sunshine before Royal Ascot at Ascot Racecourse today 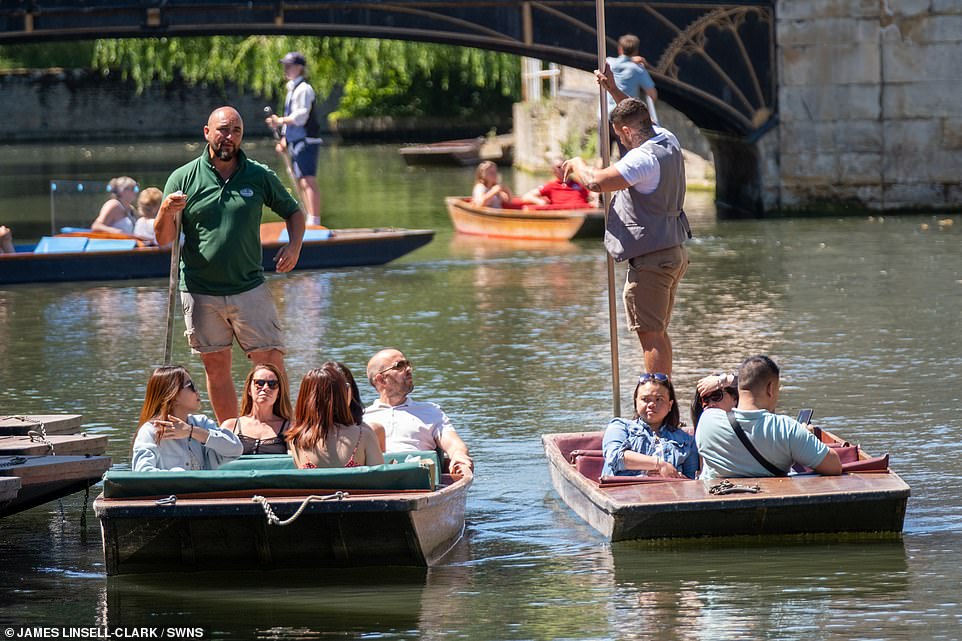 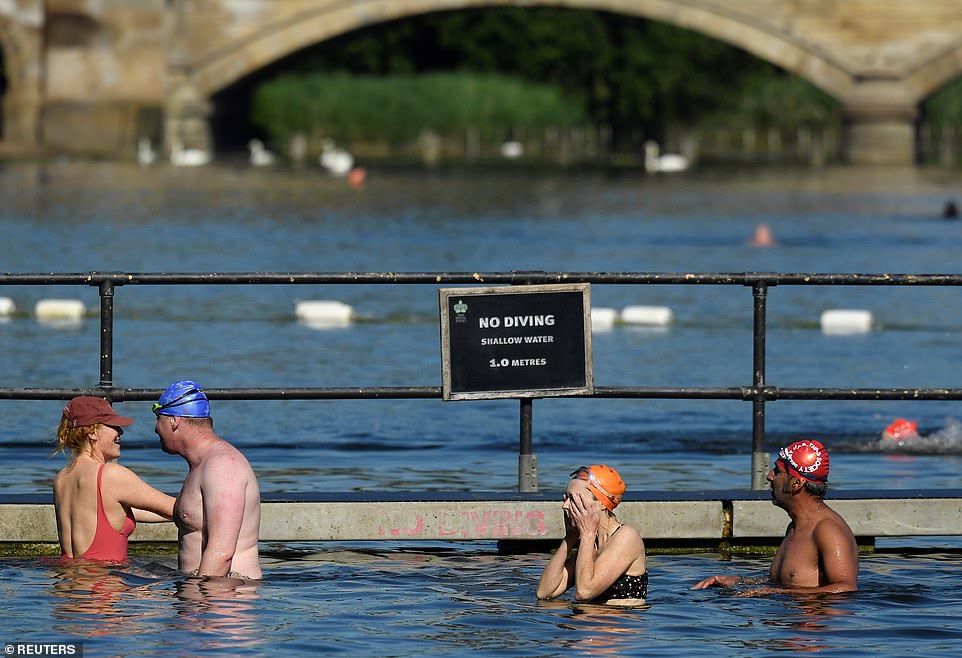 Parts of South West England could see up to 2in (50mm) of rain falling in three hours or 1.2in (30mm) in just an hour tomorrow, while hail, frequent lightning and strong gusty winds are also possible.

Maximum temperatures in Britain got to at least 70F (21C) for the 21st day in a row today. Here are the UK highs for the past three weeks, including the hottest day of 2021 so far which was recorded on Monday:

Met Office spokesman Stephen Dixon said: ‘Today will be fine for many with sunshine across England and Wales before an evening of thunderstorms which will last for the next few days. There’s a chance some areas in London could get to 30C (86F) today which would make it the hottest day of the year.’

Wales could be 72F (22C) this evening, when football fans watch their nation take on Turkey in Euro 2020 in a 5pm kick-off at Baku’s Olympic Stadium in zerbaijan.

Areas in central and southern England could reach the low 80Fs (high 20Cs), while Northern Ireland and Scotland, which will see cloud and scattered showers, may hit the mid-60Fs (high teens Celcius).

‘Parts of south-western England could see up to 30mm to 40mm of rain falling in just a few hours on Thursday, with the warning remaining in place until midnight for large swathes of England.’

Another set of thunderstorms will then move in from Friday morning, Mr Dixon said, with ‘intense’ showers leading to as much as 2.4in (60mm) of rain falling over 12 hours in the worst affected areas.

England’s much-anticipated Euro 2020 clash with Scotland at Wembley Stadium in London on Friday evening could be hit with bands of ‘heavy thundery showers’, forecasters added.

Mr Dixon said this was due to a small, low-pressure system moving in from Europe, with warmer surface-level air meeting colder upper air, leading to thunderstorms.

It comes as an allergy expert warned hayfever sufferers, who have faced a very high pollen count in recent days, face ‘thunder fever’ when the storms sweep in.

Thunder and lightning can split tiny pollen grains into super-irritant micro-particles – with a risk posed to hayfever sufferers by counts leaping to ‘very high’ across England on Saturday after remaining mostly ‘high’ for the next two days. 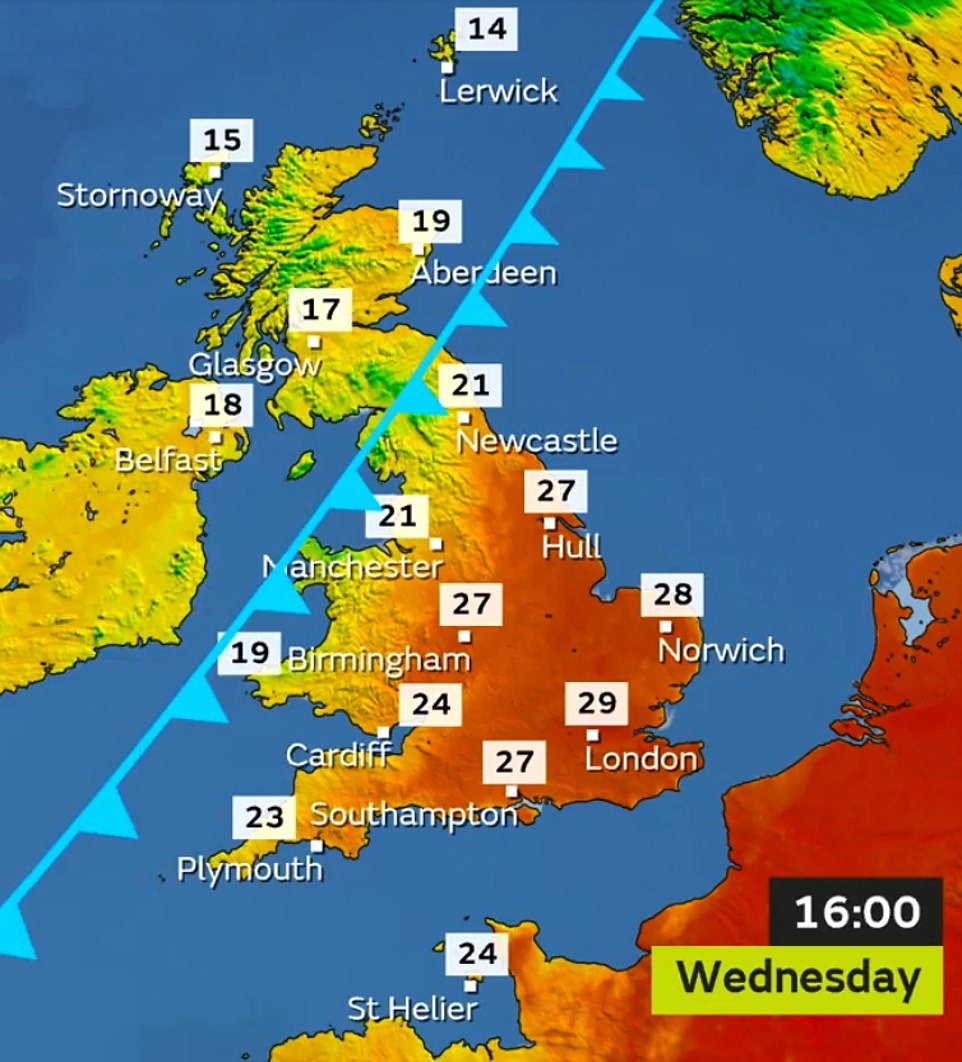 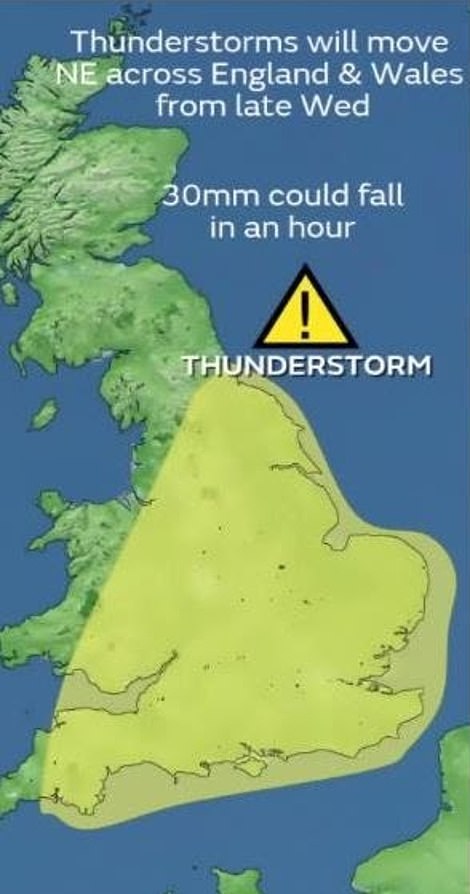 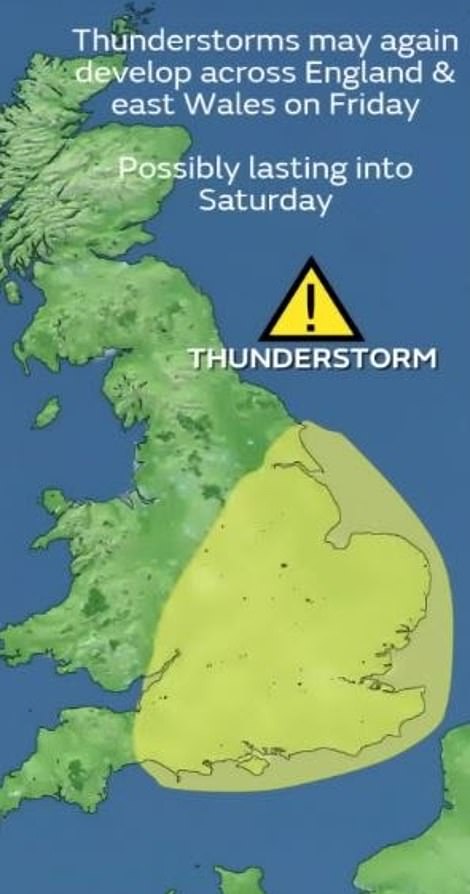 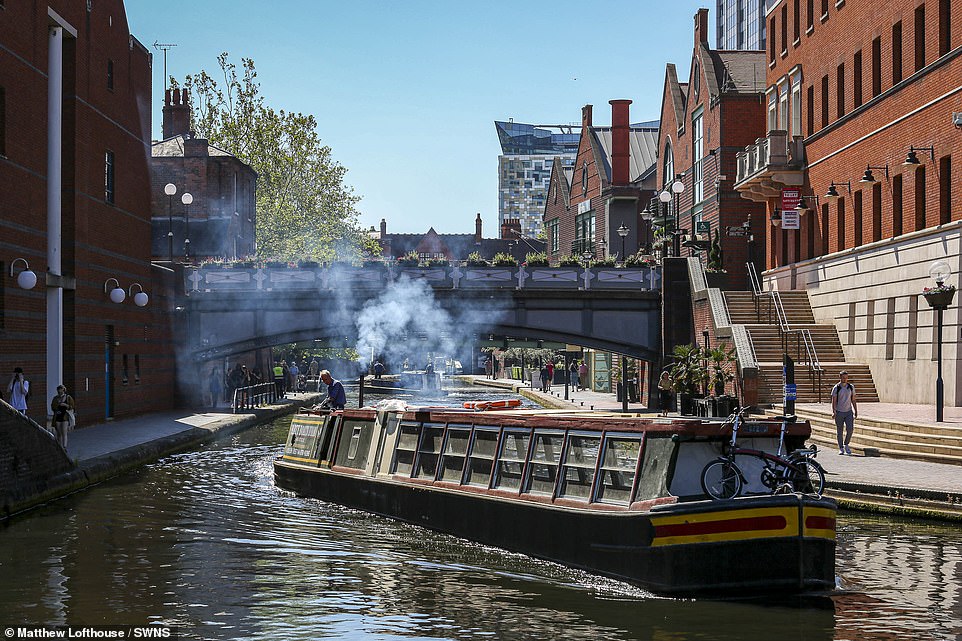 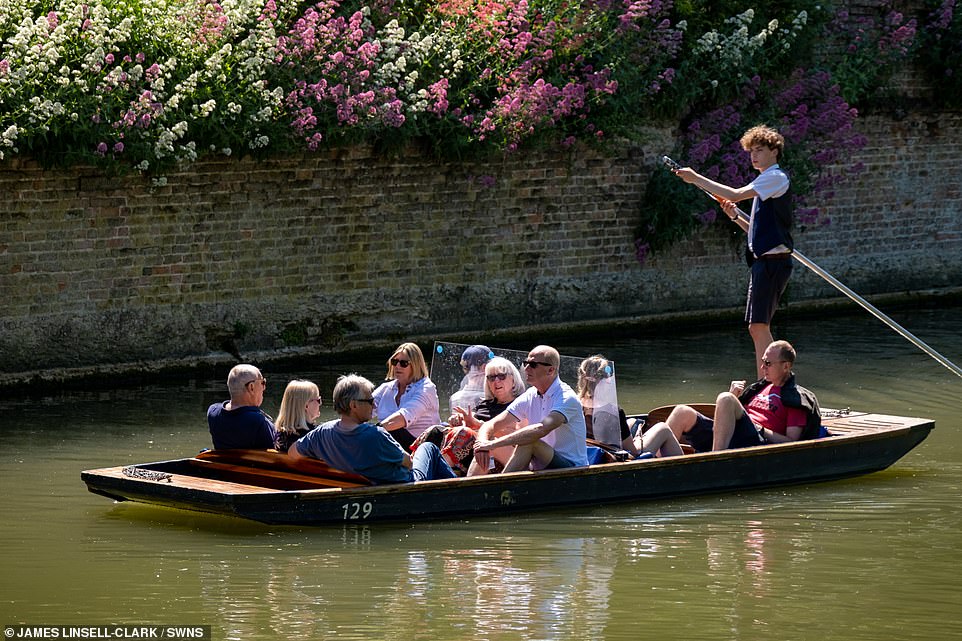 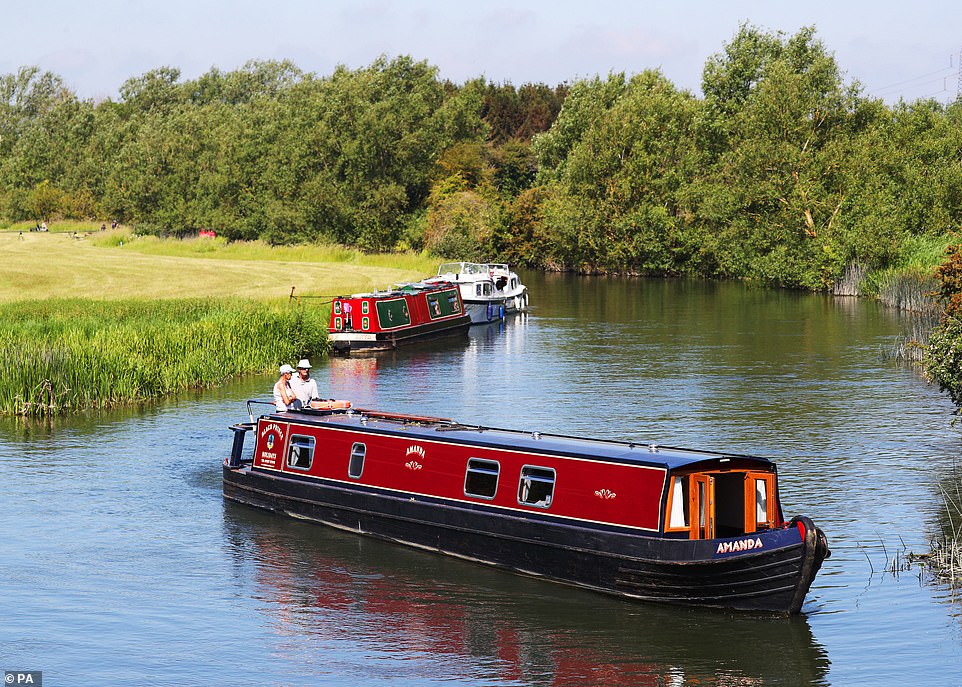 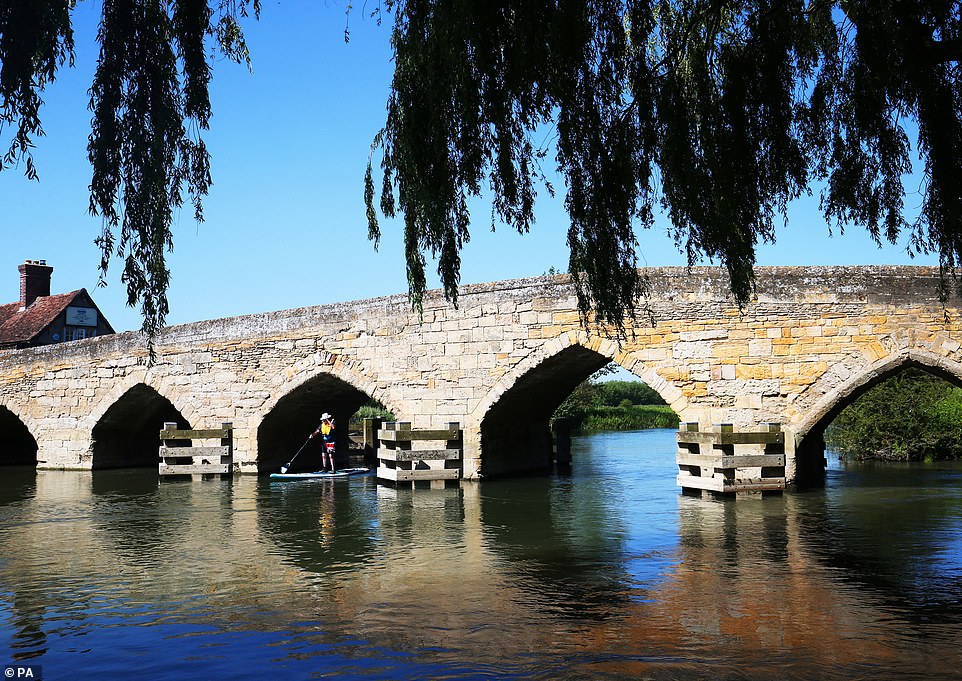 ‘This occurs because there is double the amount of irritant in the air made up of particles which are much smaller having been split apart.

‘Thundery weather over the next few days following such high temperatures is likely to bring perfect conditions for this to happen.’

A recent explosion of grass and weed pollen, after lifting into the atmosphere on warm currents, will be washed to nose-level by torrential rain.

Mr Wiseberg, creator of HayMax allergen balms, added: ‘This is a phenomenon known as ‘upside-down hay fever’ and is caused by alternating weather conditions. 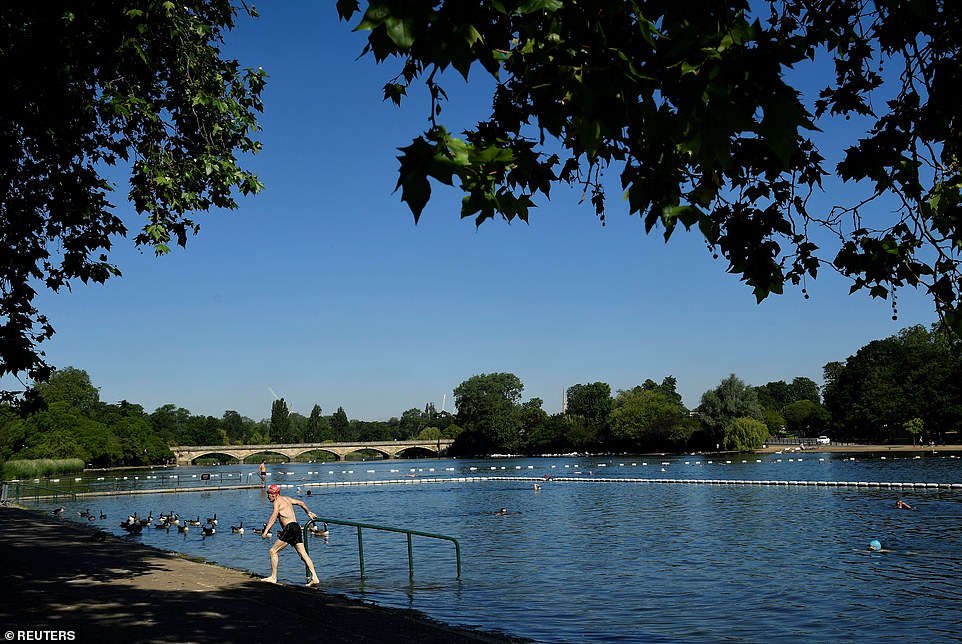 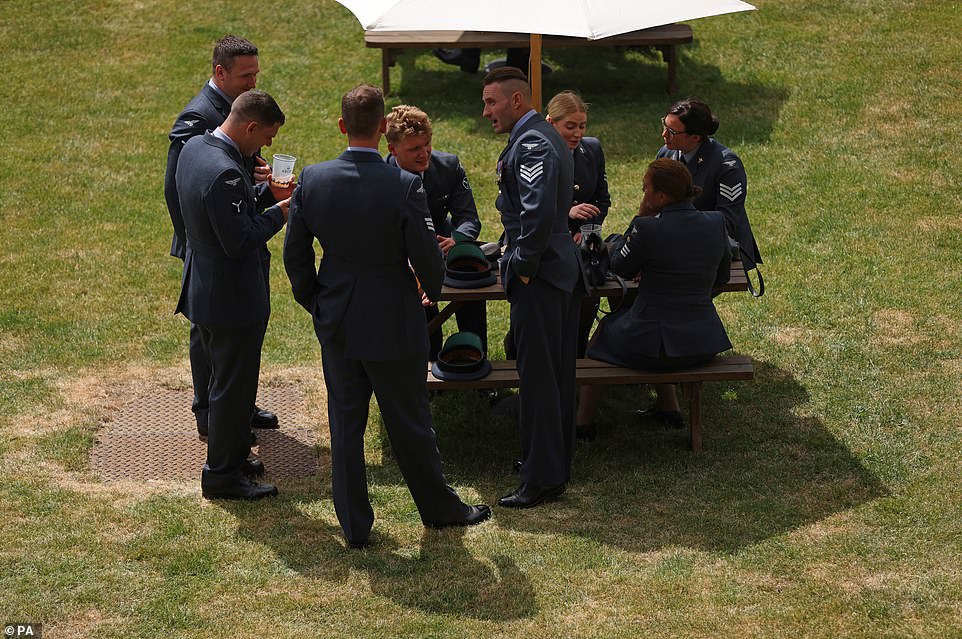 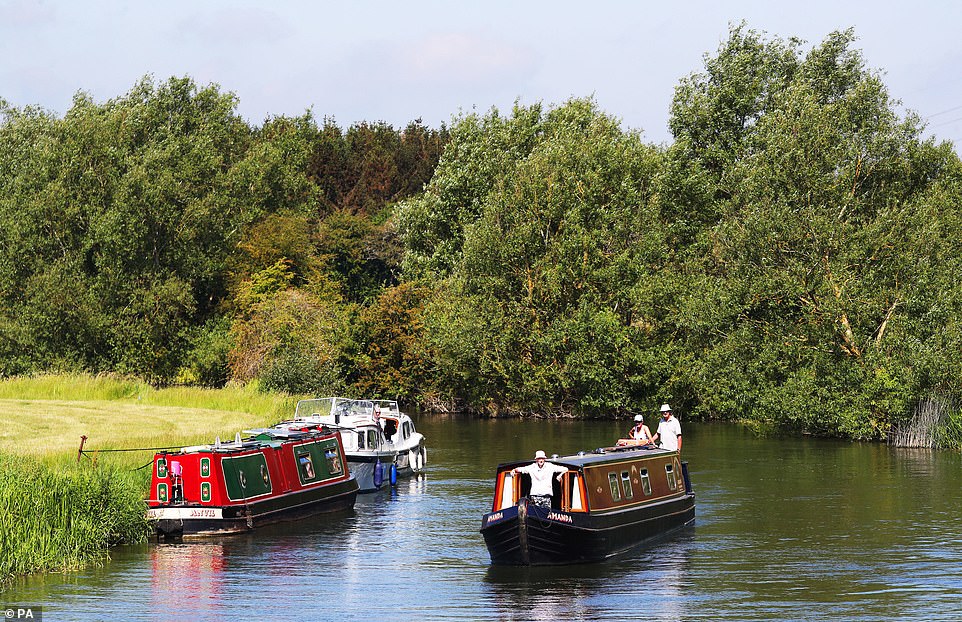 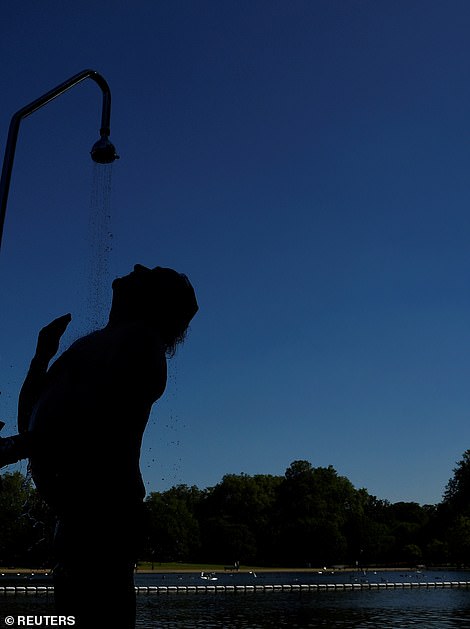 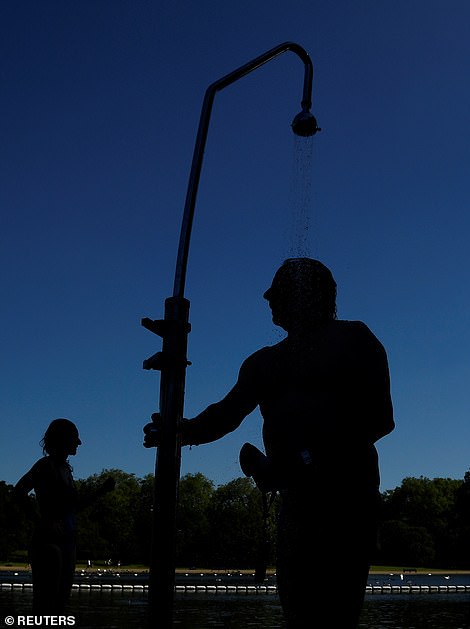 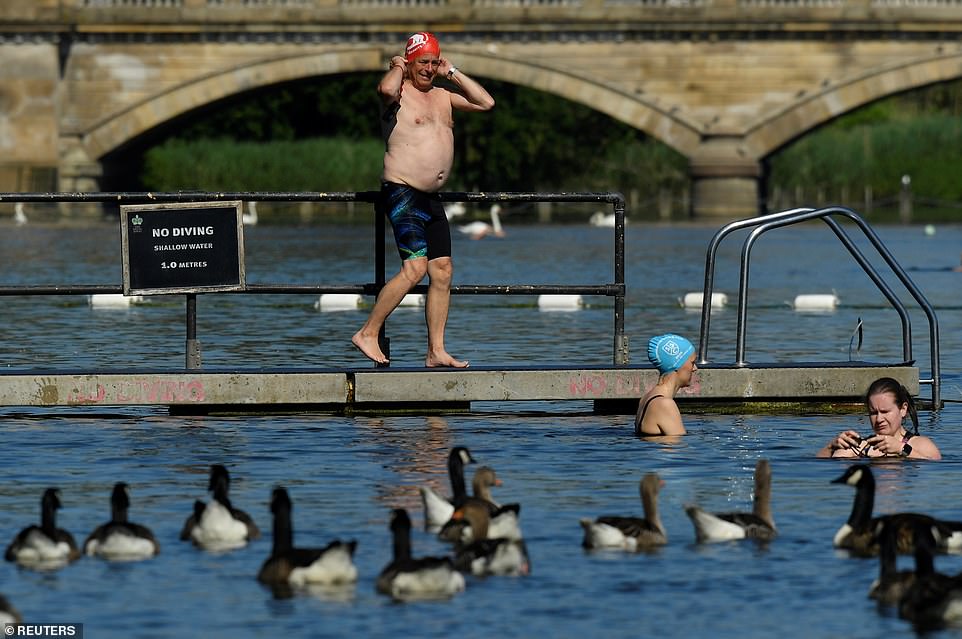 ‘Although you would expect hay fever to calm down when the sunshine disappears and is replaced by rain, for some the reverse happens.

‘Sufferers of this condition typically experience their symptoms starting at the wrong time.

‘When the sun comes out and there is lots of pollen, their hay fever can ease, but on rainy days it gets worse and they end up sneezing more than usual.

‘This is because as warm air rises it carries pollen high into the atmosphere, and when the rain comes, wallop, it brings it back down again where it can trigger hay fever.’