BRITS are basking in 17C sun today as temperatures soar across the country.

But the warm weather is not set to last as an Arctic blast brings a chill towards the end of the week.

⚡ Read our UK weather live blog for the very latest news and forecasts... 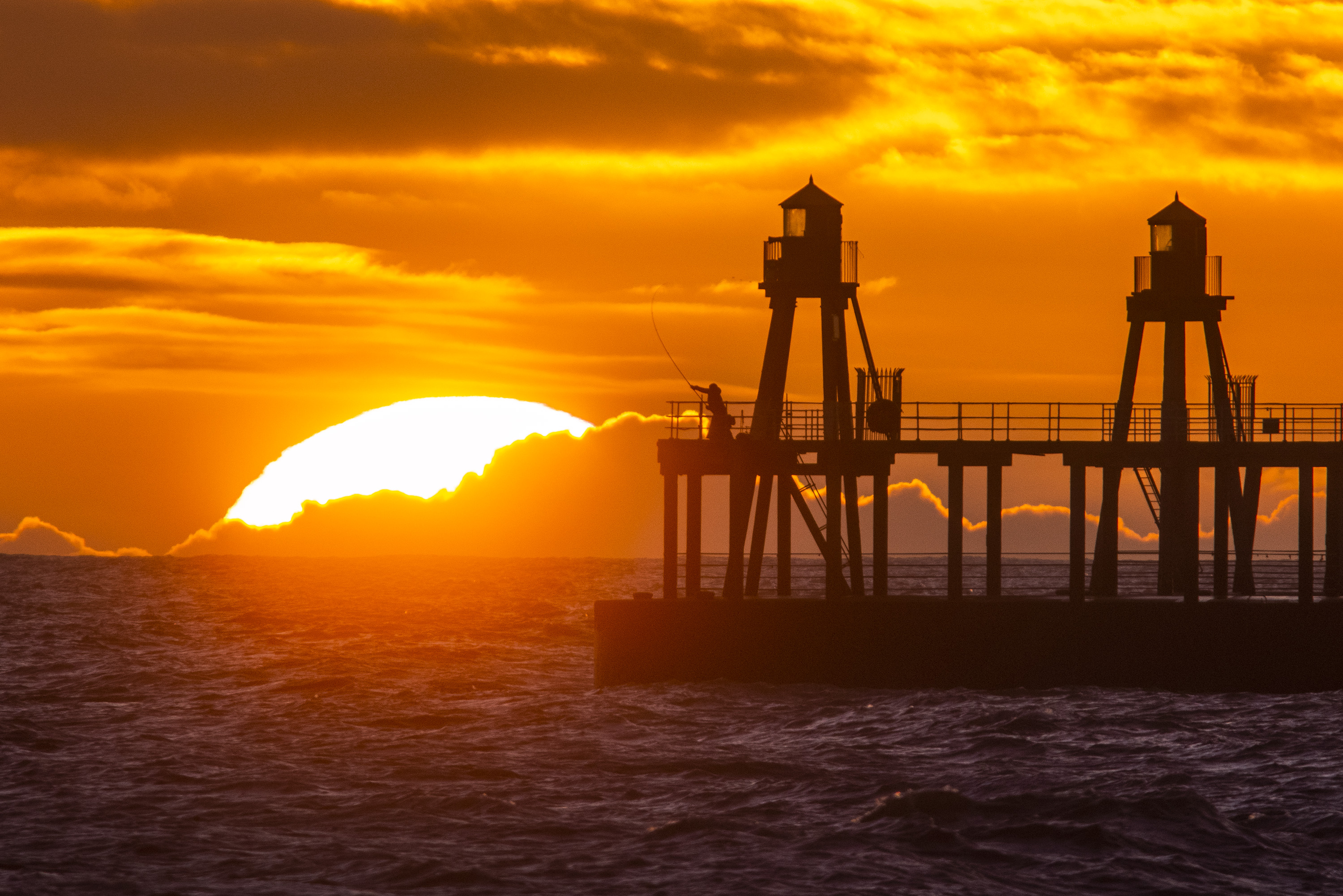 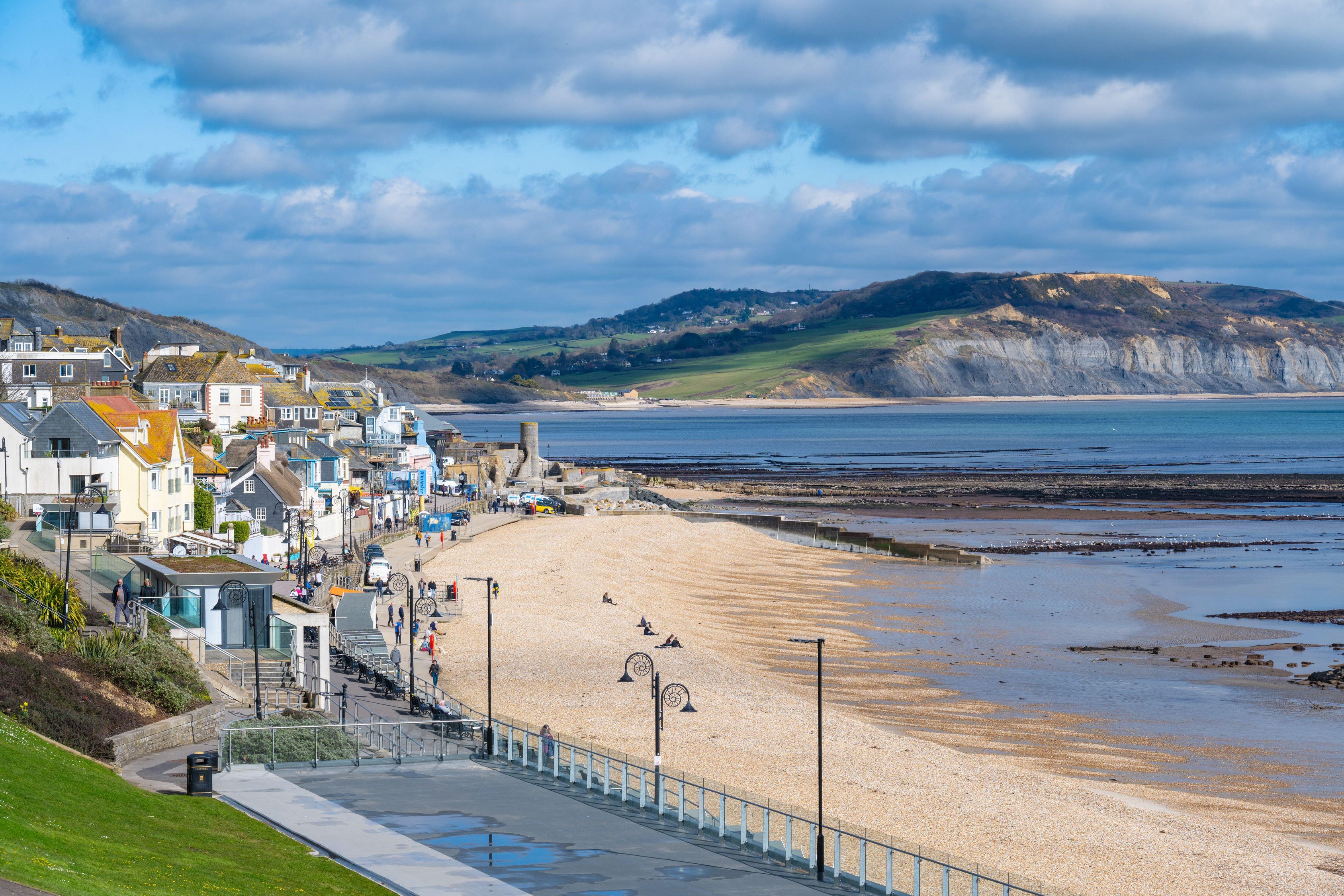 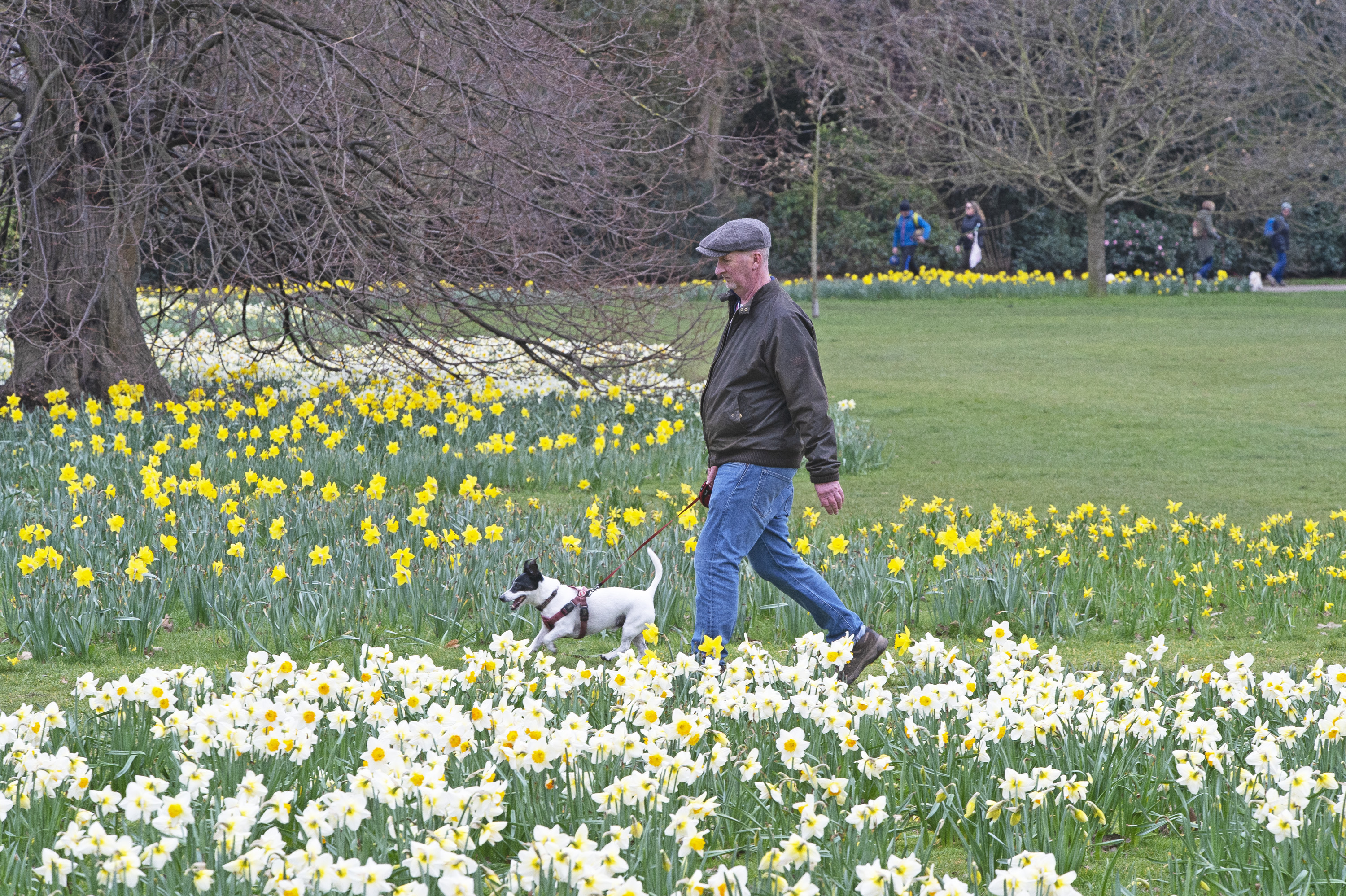 Temperatures this afternoon reached 17.3C in Cardiff making it the warmest day of the year so far in Wales.

And people in Edinburgh are enjoying highs of 15.4C – the hottest day of 2021 in Scotland and warmer than Barcelona where it is 15C.

It is also feeling particularly balmy in the sunshine in parts of western England.

In Pershore, Worcestershire, the mercury hit 17.9C, and it could reach 16C in Hereford – well above the 10C March average.

Temperatures in England fall just short of beating the warmest on record so far this year, which was 18.4C in Sandton Downham, Suffolk, on February 24.

The Met Office has said the afternoon will be full of "sunnier skies" and be "mild for many and feeling warn in the sunshine".

But after the first signs of spring, the weather will turn colder again from tonight. 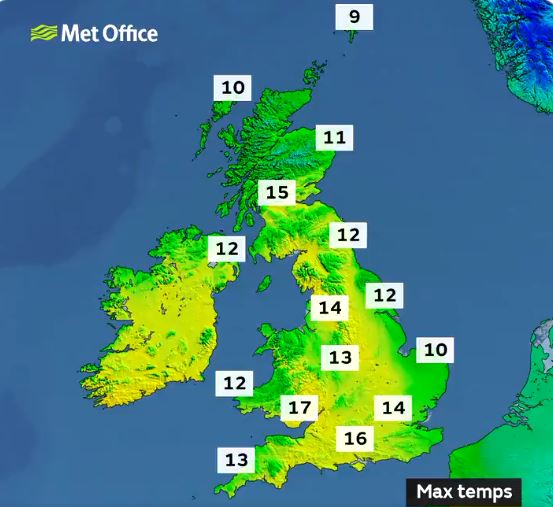 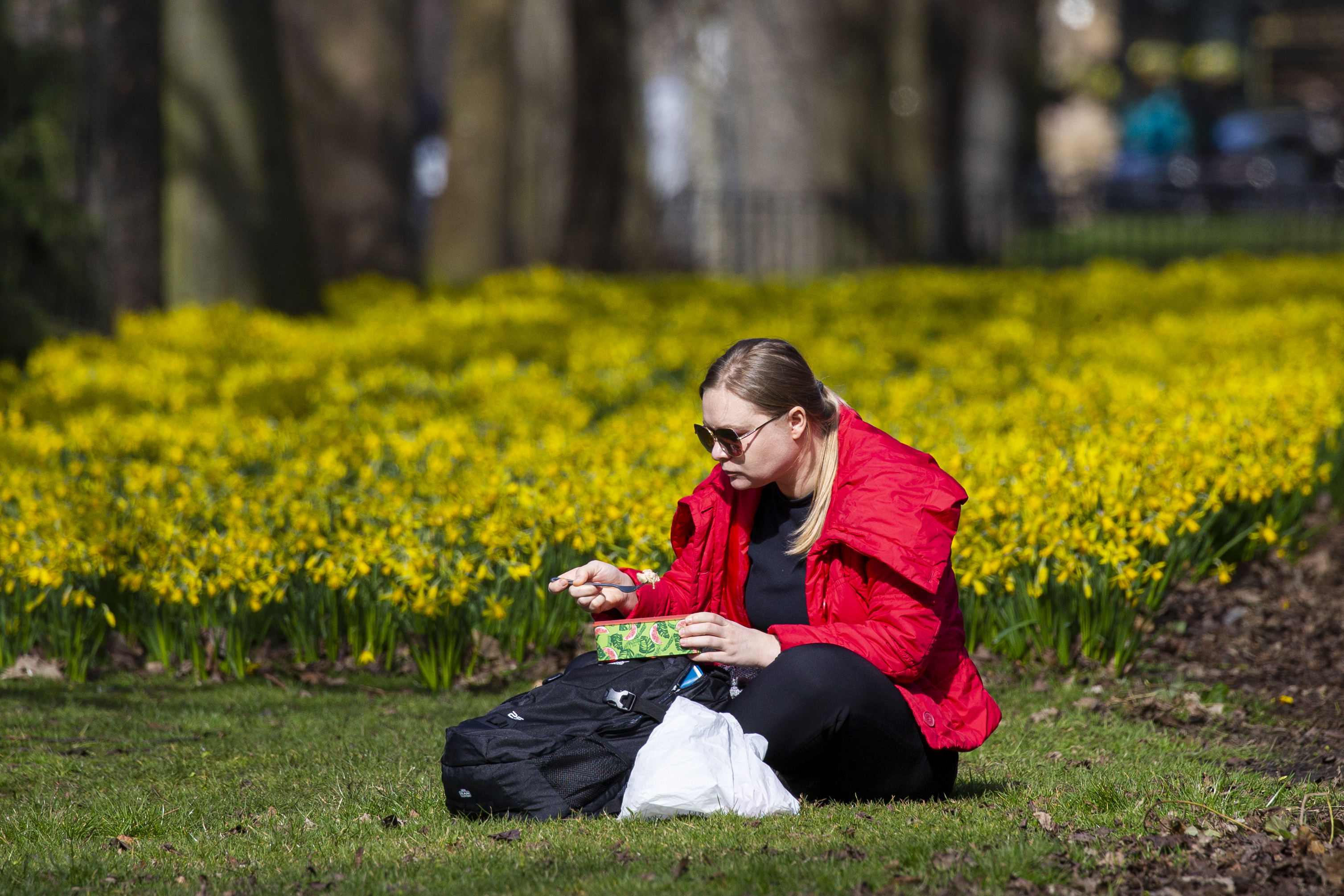 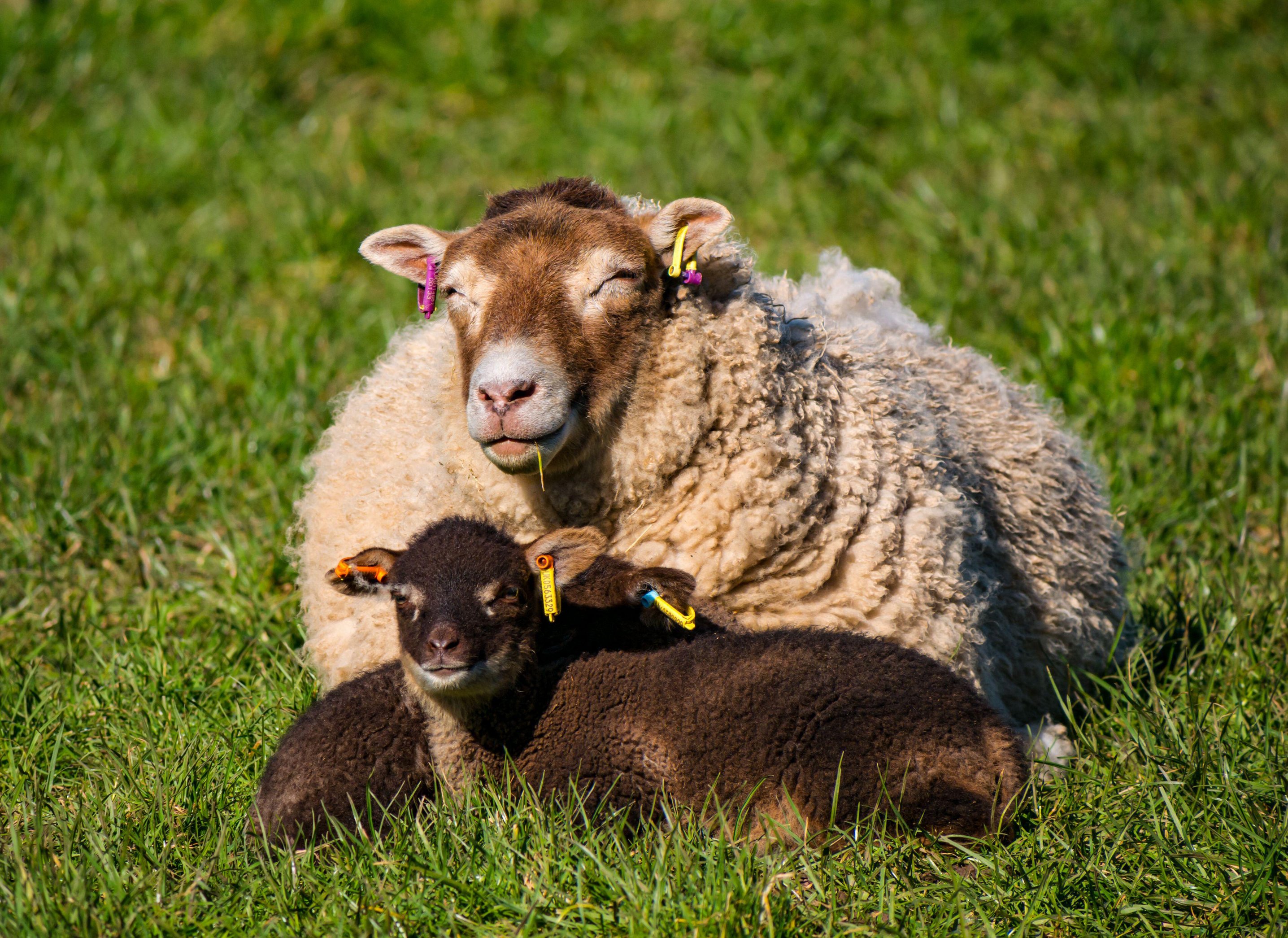 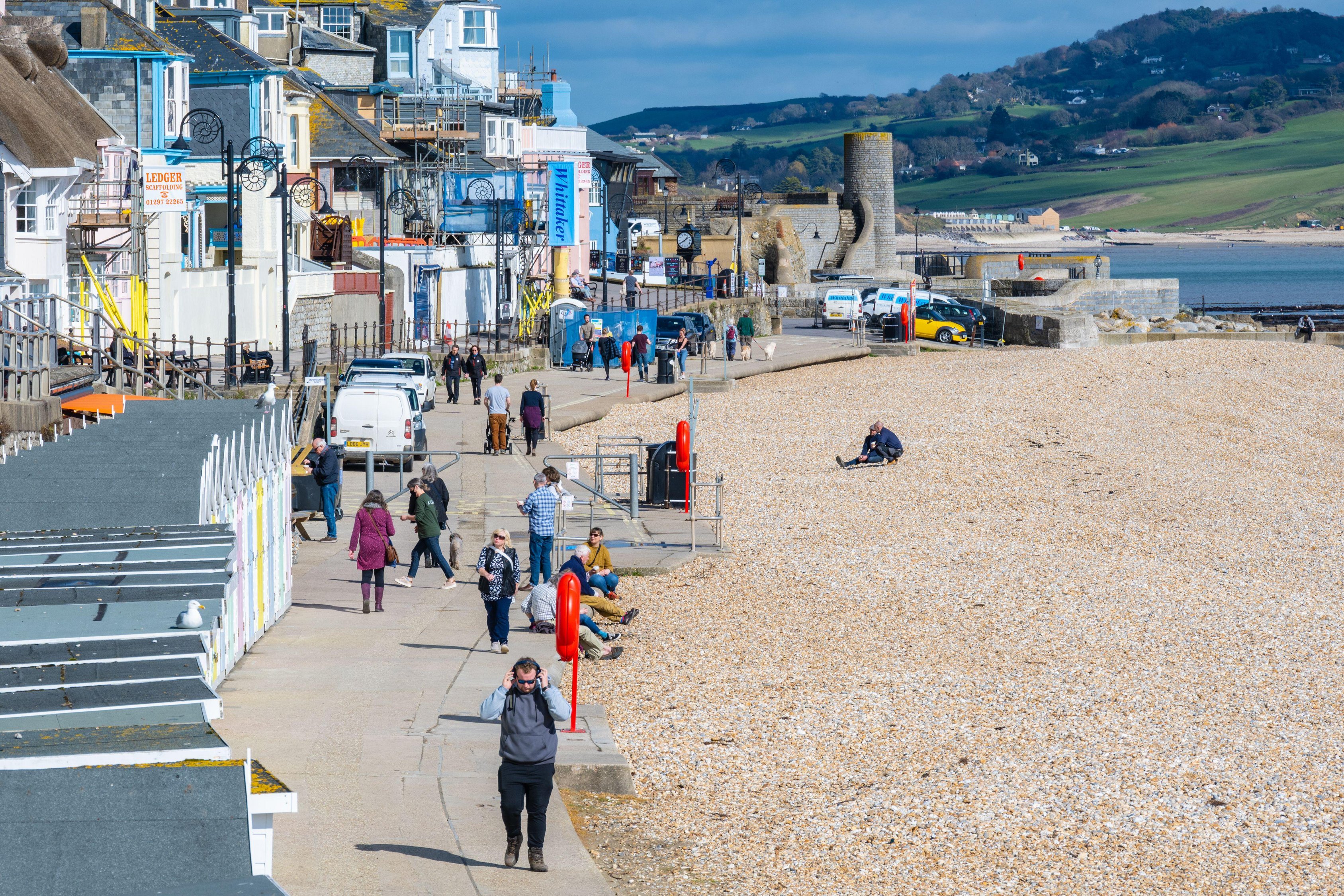 It will be cloudy in southeast England and breezy in the east, with overnight temperatures as low as -1C.

Light winds in the west will send the temperature plummeting further, and "frost is likely".

The rest of the week will be "nowhere near as high as today", hovering at or below 10C, the Met Office has said.

And forecasters have warned of an Arctic blast of cold air heading for the UK.

Winds will hit with blustery conditions, especially in Scotland and along North Sea coasts. 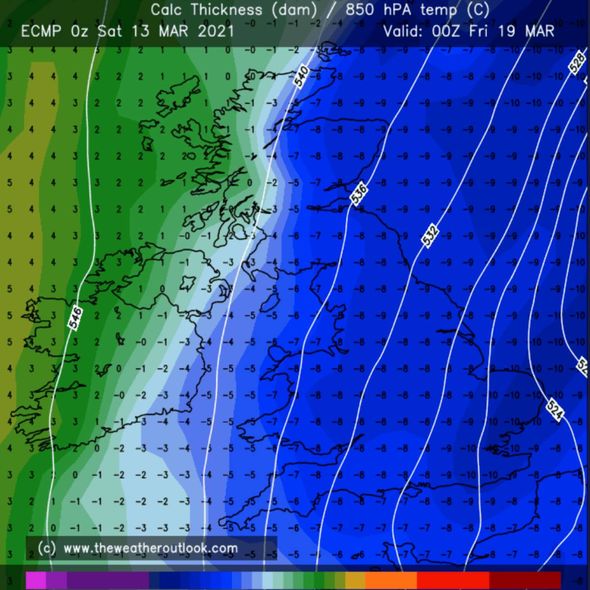 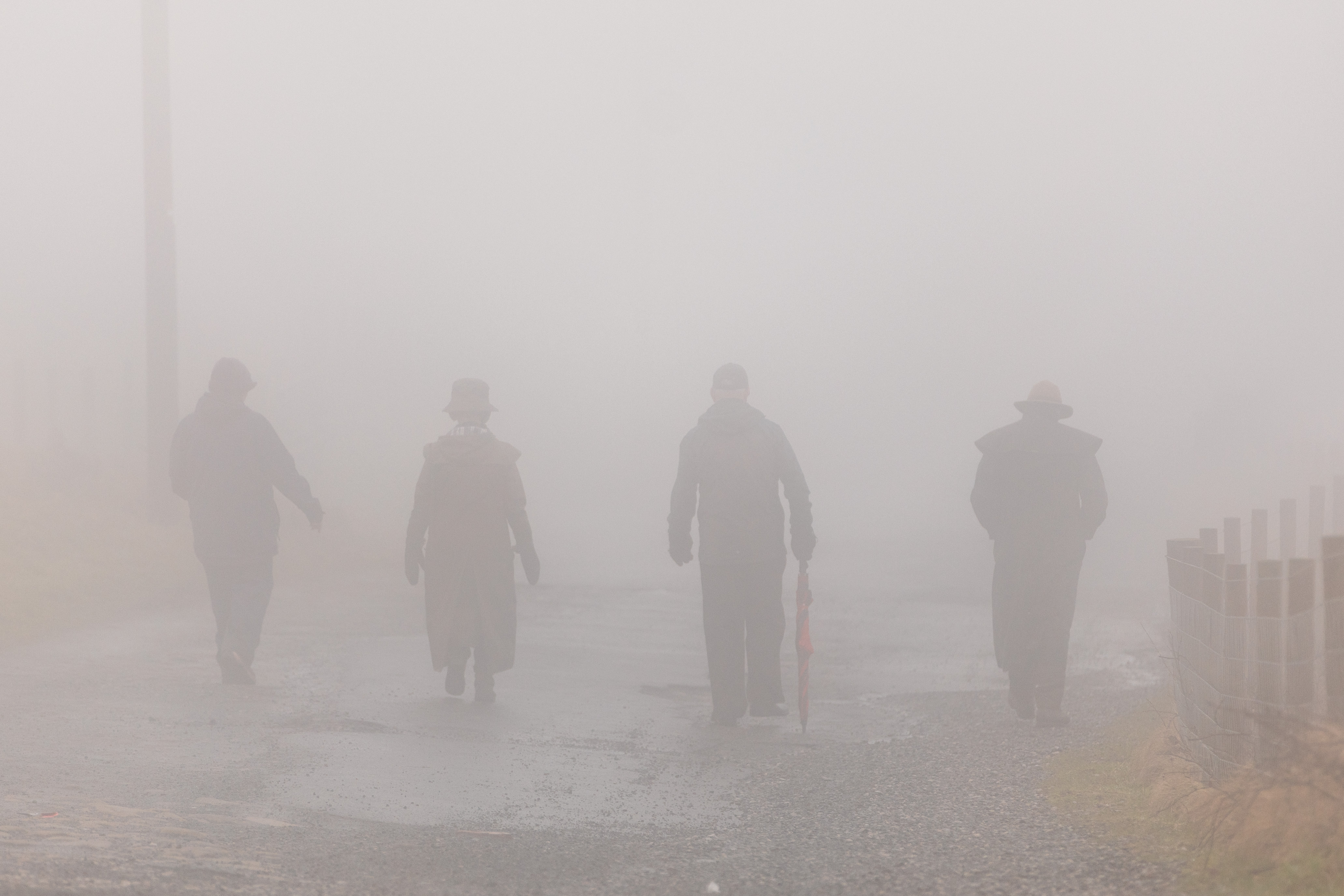 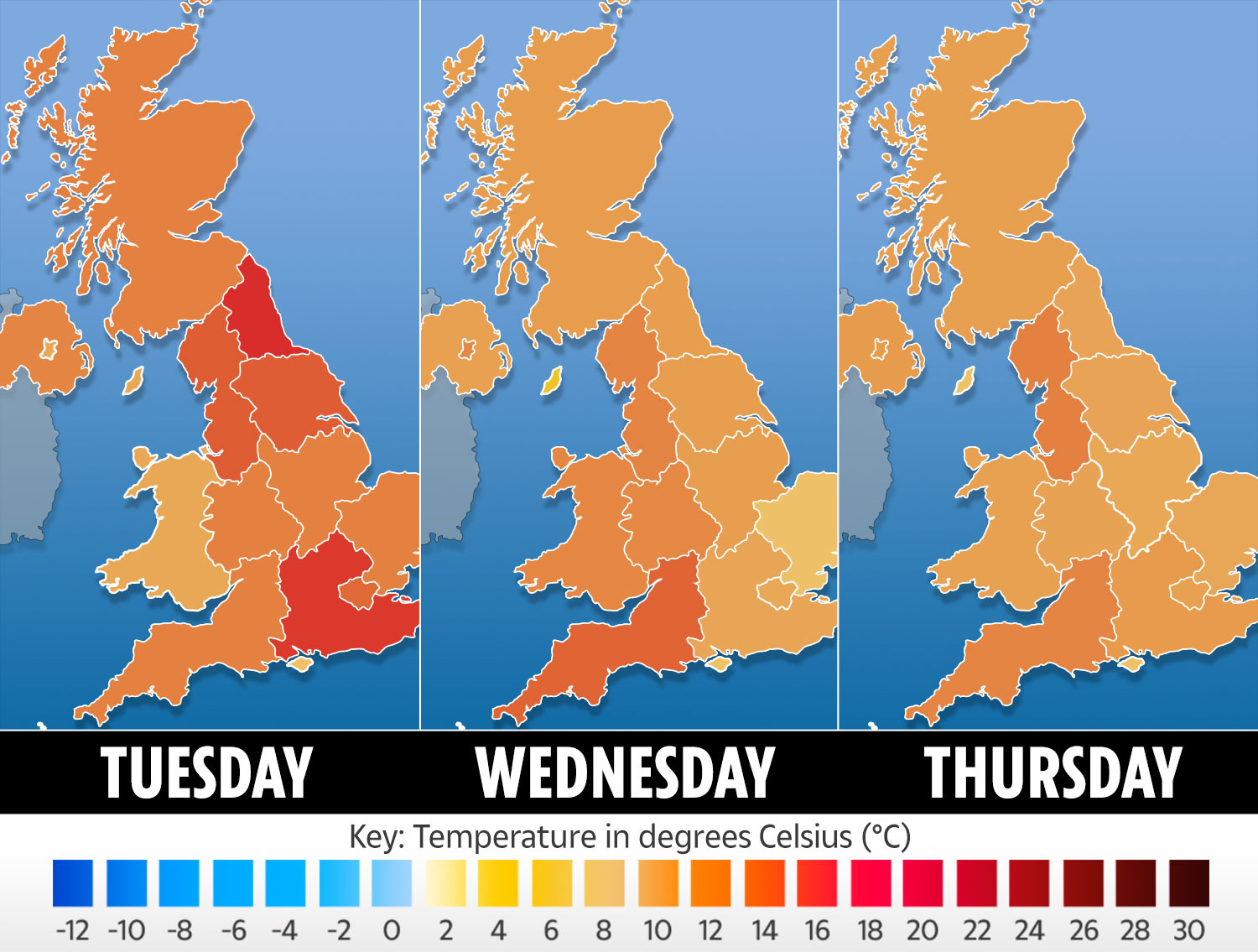 Later this week, parts of eastern and northern Scotland, England and Wales will be hit by rain.

The mercury will plummet in Scotland, Northumberland, Cumbria, Liverpool and Manchester, which could mean snow on Thursday and Friday, according to Netweather.

It predicted a 30 to 85 per cent chance of the white stuff, with temperatures in the South East reaching between -3C and -5C.

Temperatures in the South East could hit a low of between -3 and -5C as cold air comes in from the North East. 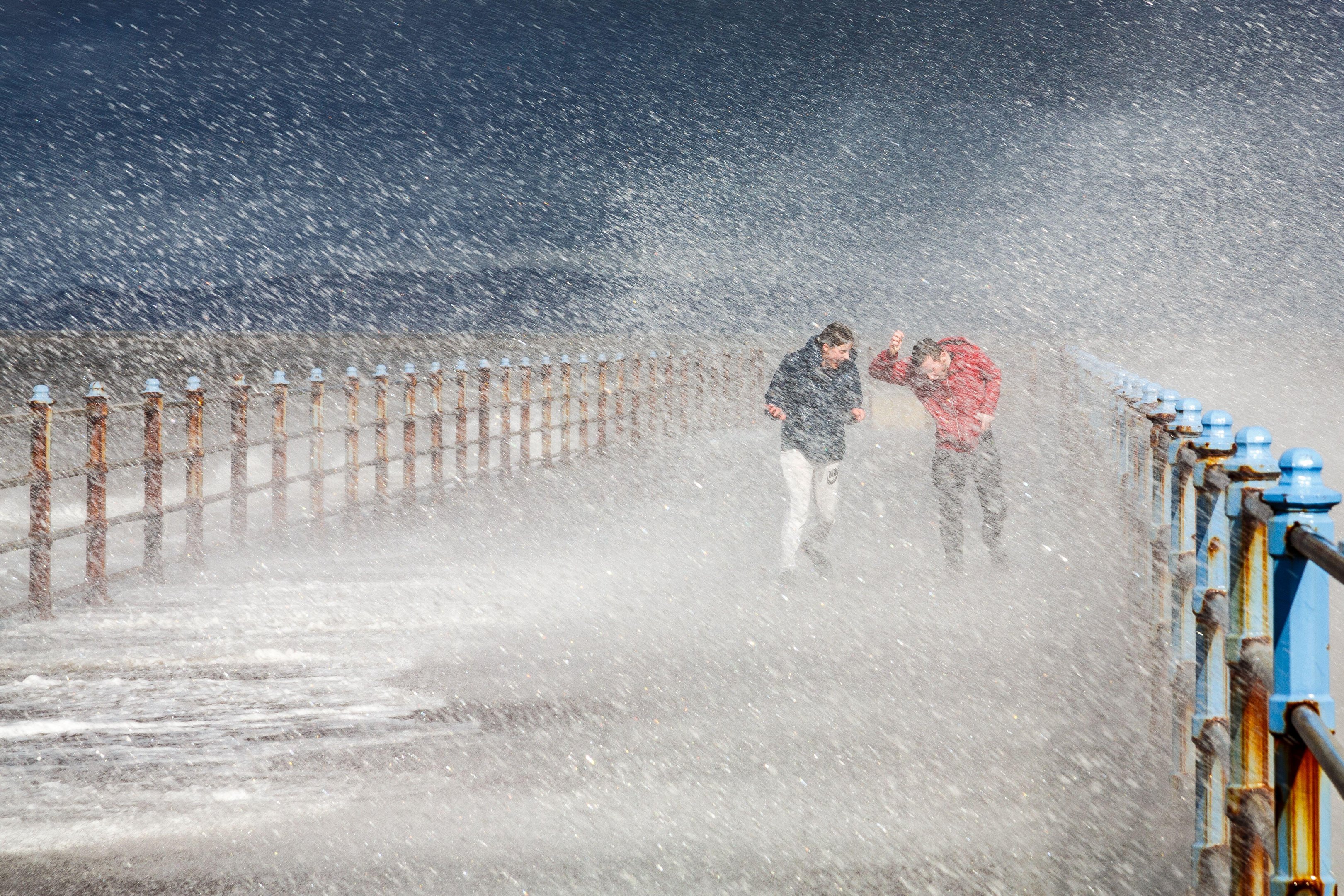 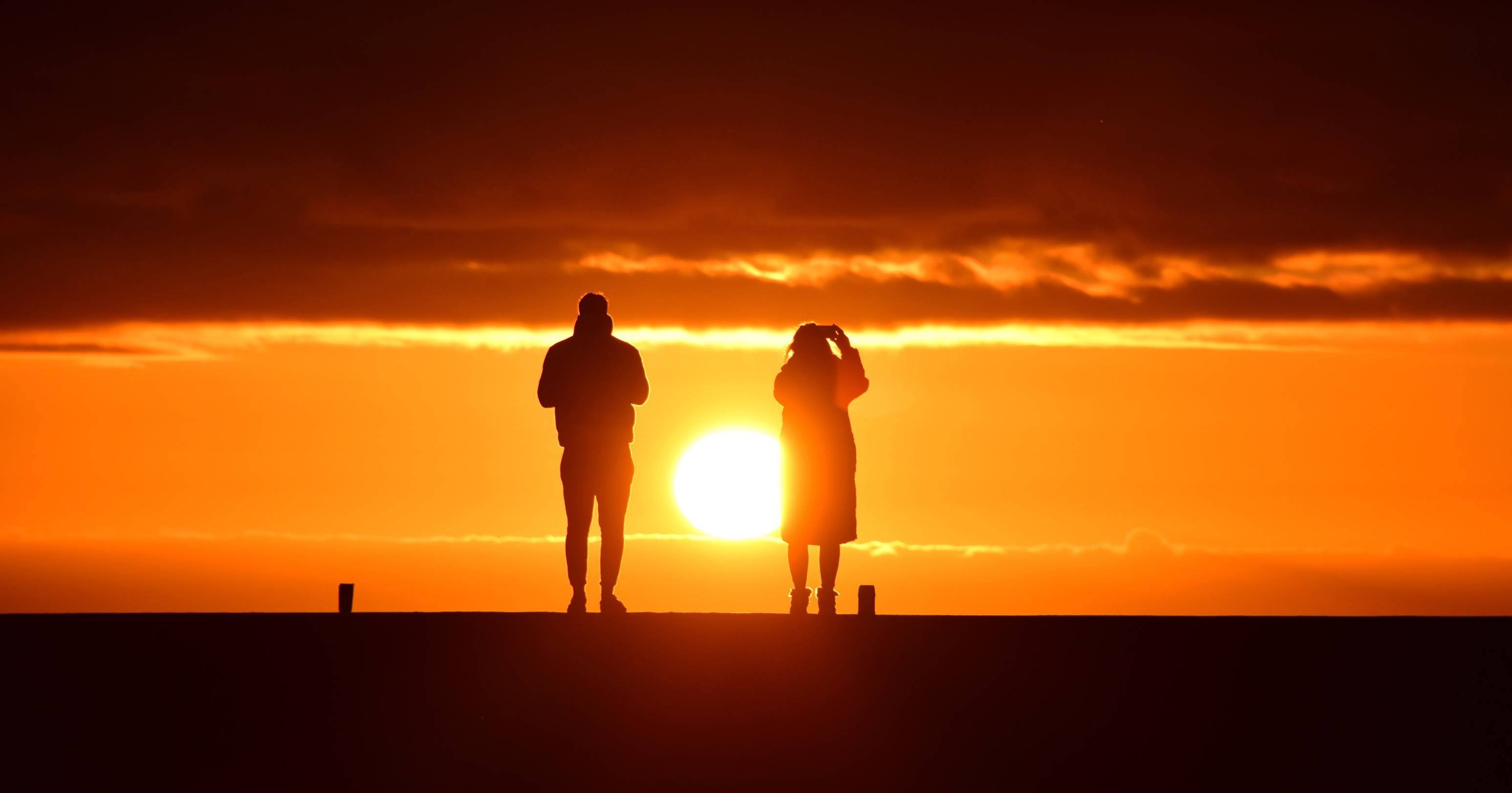 Towards the end of March, a period of unsettled weather with spells of rain and some strong winds crossing all parts of the UK is expected.

Showers in the South East may be wintry, bringing cold air in.

Temperatures will be at or slightly below average for this time of year by the end of the month, according to the Met Office.

Northern Ireland recorded its highest temperature of year so far with the mercury hitting 14.8C on Monday.