Reggie Edwards, the acting city manager of Brooklyn Center, Minnesota, said Thursday that the protesters that have taken to the streets in the city after the fatal police shooting of Daunte Wright could be broken up into three categories.

By far, most of those who turn out are peaceful and want to share their pain over the deadly shooting, he said. Another group consists of some agitators who try to change the narrative. But then he said there are also those prepared with a game plan and bring equipment that enables them– for example– to try and build barracks.

Edwards is the new replacement for Curt Boganey. His predecessor was dismissed after he publicly differed with Mayor Mike Elliot on whether the police officer who fatally shot Wright should be fired. He said the officer deserved “due process.”

Edwards made his comments during a Zoom meeting after a closed session with other officials from the city and Fox News obtained a transcript. He did not immediately respond to an after-hours email to elaborate.

He said in the Zoom that there have been arrests, but primarily the protests have been very peaceful. He estimated that about 90 to 95% of the protesters have been peaceful.

Police and demonstrators have clashed. Some protesters hurled water bottles at police and officers used chemical irritants and flash-bang grenades. Dozens have been arrested the first few nights.

Members of the violent far-left activist group Antifa identified themselves to a Fox News reporter who was at a rally in Brooklyn Center earlier this week.

“We saw an increased number of kids ‘wearing the uniform’ if you will, the black hoodies, the backpacks. I saw leaf-blowers out there, different kinds of … makeshift shields and things. It was changing dramatically in terms of the makeup, and certainly the numbers of the crowd,” Mike Tobin, a Fox News correspondent, said. 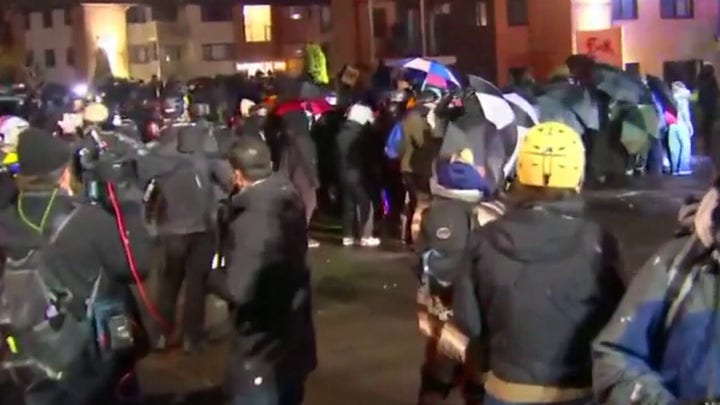 Demonstrators took to the streets in the city for the fifth consecutive night on Thursday and held a rally outside the city’s police precinct. Fox 9 reported that the city’s mayor announced a 10 p.m. curfew. The report said that police set up a new line of fencing to better separate officers from protesters.

The station described the protest, “While the group numbering in the hundreds set up outside the city’s police department on North Humboldt Avenue, police mostly stayed back from fencing, a more laid-back approach compared to confrontations earlier in the week.”