Wealthy businessman, 57, is crushed to death by water buffalo that also left teenage son, 19, fighting for his life after it went on a rampage at farm where he ran buffalo soap business

A wealthy businessman who ran a buffalo soap company was crushed to death by one of his own animals in a tragedy that also left his teenage son fighting for his life.

Ralph Jump, 57, was killed after the giant animal rampage at their village farm in South Wales yesterday.

His 19-year-old son and 22-year-old daughter were also injured in the attack, with the former having to be airlifted to hospital where he is said to be in a ‘critical’ condition. 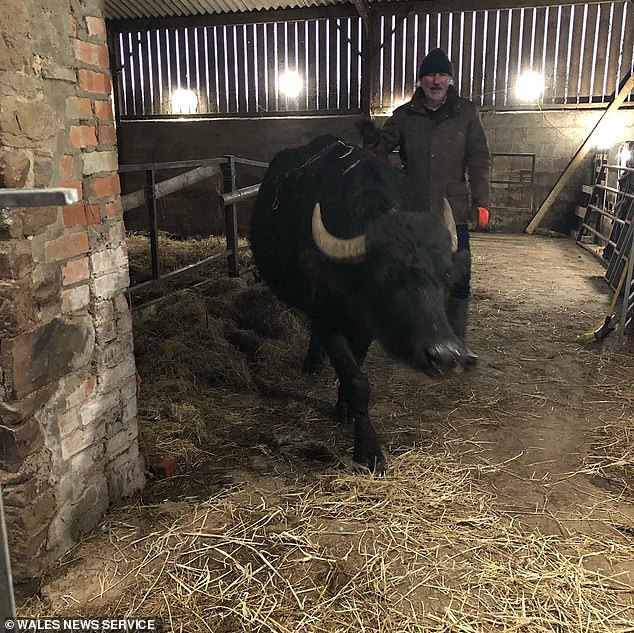 Ralph Jump, pictured with a water buffalo, was crushed to death after one of his own animals went on a rampage on his farm in Gwehelog, Monmouthshire

Mr Jump, a managing director of a heating company, rented the land in Gwehelog, Monmouthshire, to start a sustainable buffalo soap business with his family.

The father-of-three – known as Jon – hand-reared the buffalo at their three-acre farm along with his youngest two children.

Daughter Isabel, 22, organised the sales of the hand-wrapped bars of scented soap – and the Bufalina Soap Company started selling them ahead of last Christmas.

But their business dreams were shattered when one of the buffaloes attacked at their picturesque farm in the Wye Valley.

Jon was killed by the time police arrived and his son needed to be taken by helicopter to hospital, where he is still fighting for his life.

Isabel suffered leg injuries but is expected to recover. 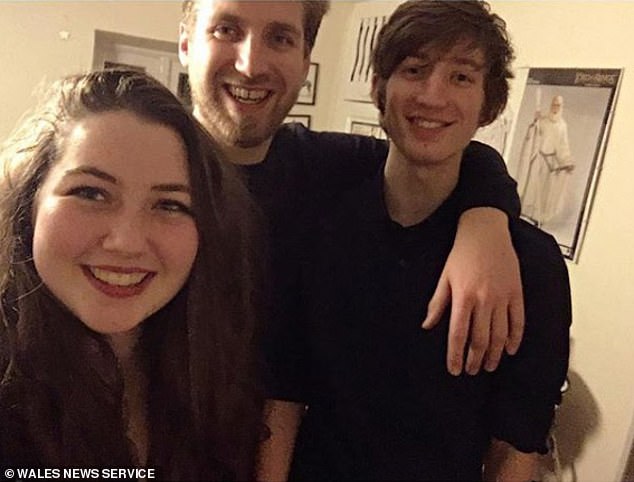 Daughter Isabel, 22, pictured left, with her two brothers, who have not yet been named after the tragedy yesterday

Her mother Jo is being comforted by friends after the tragedy.

A neighbouring farmer said: ‘Jon approached us last year about buying some hay for his buffalo.

‘We asked him what he was doing and he said he was trying to diversify the farm.

‘I think he had about a dozen buffalo at the farm and had bred a couple of calves over the past year or so.’

Police say the animal attacked at a farm property in Gwehelog, near Usk, in Monmouthshire, South Wales.

The buffalo has now been put down.

Mr Jump was MD of the Wunda Group, based at nearby Caldicot, Gwent. The company supplies heating equipment and employs 56 people – but is on lockdown.

A friend said: ‘Jon spent all his life in a shirt and tie but loved pulling on his wellies to get stuck in at the farm. He was as happy as anything there.’ 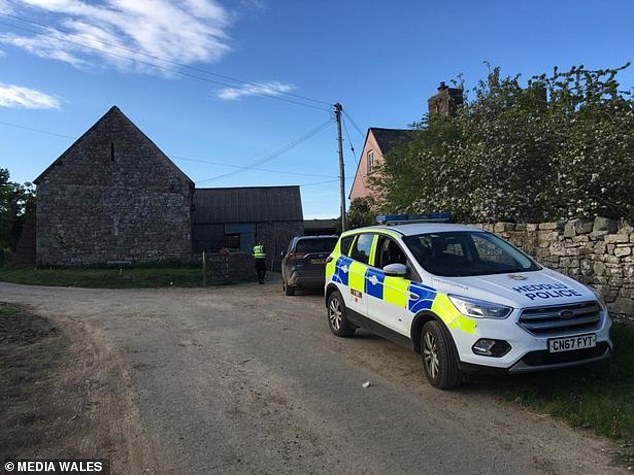 Police were called to a farm in Gwehelog, Monmouthshire, pictured, at around 2.50pm on Tuesday

The Jump family rented the farmland from the Pontypool Park Estate. A spokesman said: ‘It is a terrible tragedy and we feel for them.

‘The Jumps are very nice people and we feel desperately sorry for them.’

The family moved to the farm called Upper Berthllwyd about six years ago before introducing the buffaloes over the last few years.

Another neighbour said: ‘You couldn’t hope to meet nicer people. Their soap is very nice and they loved making it.

The farm is the base of The Bufalina Soap Company – selling a range of scented buffalo soap from £4 to £42.

The company says: ‘We make our soap with the milk from our herd of Mediterranean Water Buffalo, located in the Welsh Marches. 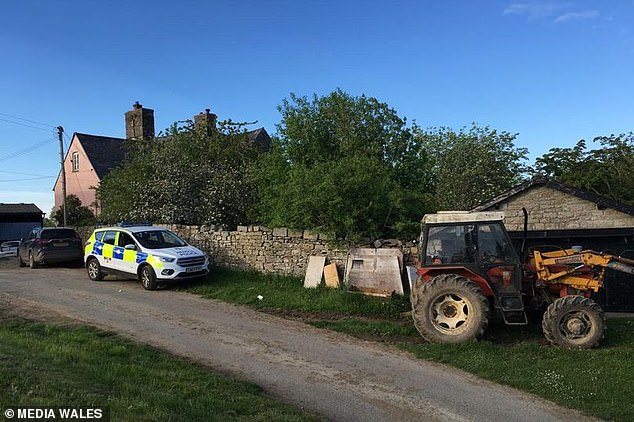 Neighbours described it as ‘a terrible shock when ambulances and police suddenly turned up’, pictured

‘Around the World this buffalo breed is famous for its dairy products such as mozzarella, gelato and ice cream. The richness of the milk makes it ideal for making a creamy, luxurious and gentle soap which leaves the skin feeling soft and moisturised.

‘Our unscented and scented soaps (mainly made with essential oils and a couple with parfums) are all free from Palm oil, Parabens, Petrochemicals – made only from Water Buffalo milk, Coconut oil, Olive oil, Sunflower oil, Bees wax and Shea Butter.’

Emergency services were called at around 2.50pm yesterday.

A spokeswoman for Gwent Police said: ‘A 57-year-old man from the Gwehelog area was pronounced dead at the scene by paramedics from Wales Ambulance Service.

‘A 19-year-old man from the Gwehelog area sustained critical injuries during the incident.

‘He has been taken to the University Hospital of Wales for treatment by the Welsh Air Ambulance. 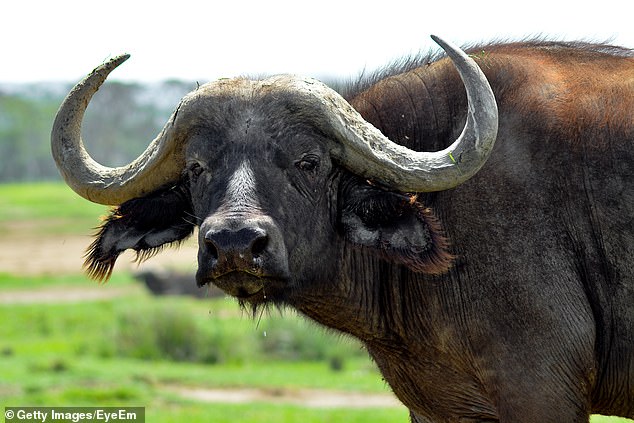 Pictured: A water buffalo. Ralph Jump, 57, was killed by an animal at his farm in Monmouthshire, South Wales

‘A 22-year-old woman from the Gwehelog area sustained a serious injury to her leg.

‘Her injuries are not thought to be critical and she has been taken to the Royal Gwent Hospital for treatment by the Wales Ambulance Service.

‘The water buffalo has been destroyed,’ police said.

It is believed the beast had been kept at the farm to produce milk for cheese.

A neighbouring farmer told The Sun: ‘We’d heard that they had started having water buffalo to keep for cheese because it is getting very popular.

‘But this is so tragic. So many farmers are trying to diversify – this is just awful.’

Another farmer said: ‘The first I knew of it was when I saw the police helicopter and the air ambulance buzzing around. It’s a huge shock to everyone in the area.’

County councillor Val Smith said: ‘It’s a lovely quiet area, lots of smallholdings and small farms. This is a dreadful thing to happen. My sympathies to all involved.’