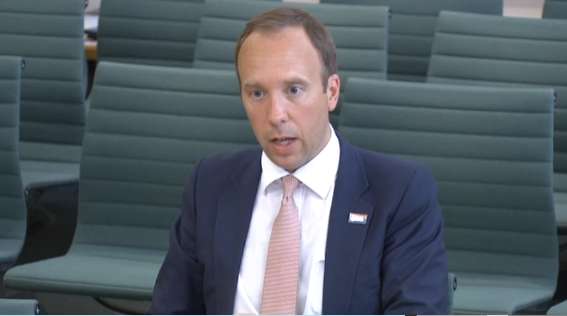 Only in April last year did the WHO finally warn that Covid could spread asymptomatically.

Mr Hancock this morning told MPs he "bitterly" regretted not overruling the global health body and sticking to his earlier hunch.

Describing the botched advice, he said: "I heard evidence from China that there was asymptomatic transmission in January and I also remember talking to my German opposite number and they had seen some evidence in Germany.

"I asked the scientists to look into it and in fact was so worried about it that I arranged a call with the WHO and I was told on that call that with respect to China this was likely a mistranslation… after that we did not get the evidence from China that could have proved it.

"So I was in the position of not having hard evidence that a global scientific consensus of decades was wrong, but having an instinct that it was.

"And I bitterly regret not overruling that scientific advice at the start and saying we should proceed on the basis there is asymptomatic transmission until we know that there isn't, and not the other way around."

The WHO only changed its advice that Covid spread asymptomatically in late April.

Mr Hancock is defending his handling of the Covid crisis to the joint science and health committee.

In his bombshell session last month Dominic Cummings said Mr Hancock misled the PM that all care home residents coming from hospital were being tested.

Pressed today if he has ever brazenly lied to Mr Johnson, the Health Secretary bluntly replied: "No."

The Health Sec repeated his account that his department had to build testing capacity before care home residents could be tested.