Butlin’s in Bognor Regis has been evacuated as an army bomb squad investigates a suspect package in the car park.

Sussex Police confirmed guests were cleared from the famous resort at 7.15am today and road blocks are now in place. 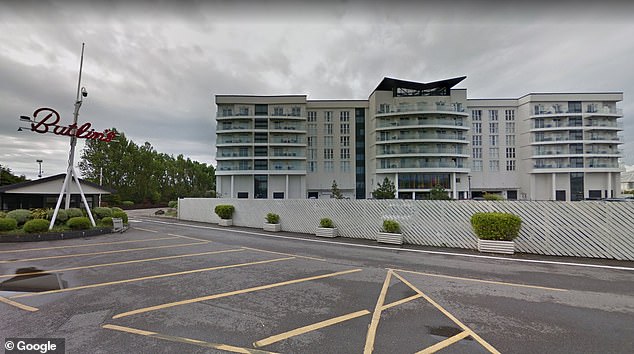 It comes a day after a historic hotel housing dozens of Afghan refugees and a Travelodge on the Scarborough seafront were evacuated over a bomb hoax a day after anti-migrant leaflets were posted through doors in the town.

North Yorkshire Police had earlier ordered those staying at the Grand Hotel and the nearby Travelodge Scarborough to vacate the buildings urgently and set up a large cordon in the surrounding area.

It has now emerged that the Grand Hotel, a Grade II listed building which opened in 1867 and was once the largest hotel in Europe, had housed 150 refugees fleeing Afghanistan after the Taliban swept to power.

Angry locals apparently posted anti-refugee leaflets through letterboxes in the seaside town a day before the hotel received a phone call ‘with what has now been proven to be a bomb hoax’.

Residents in the Fairfax area of the resort had leaflets shoved their doors at around 5am yesterday saying ‘No Afghan Migrants’.

The leaflets feature the picture of desperate refugees crammed into a US military plane taken during the evacuation of Kabul with slogans ‘Put British people first!’ and ‘Charity starts at home!’ in bold text.

In a statement issued yesterday, North Yorkshire Police said the cordon had been lifted, adding: ‘At 10.15am this morning the hotel received a telephone call with what has now been proven to be a bomb hoax. Emergency services attended the area and evacuated the building and erected cordon as a precautionary measure.

The Butlin’s resort in Bognor Regis dates back to 1932, when Butlin’s first established an amusement park in the West Sussex town.

In 1960, Billy Butlin opened his first post-war mainland holiday camp where visitors would stay in chalets, although more recently the company has been moving towards hotel-based accommodation.

A Sussex Police spokesman said: ‘Police have responded to a report of a suspicious device found in the car park of Butlins, Bognor Regis, at about 7.15am on Tuesday October 5.

‘Officers are at the scene assisting an evacuation of guests at the hotel as a precautionary measure and a cordon has been put in place.

‘Explosive Ordnance Disposal unit are also at the scene investigating the device.’