Masseuse, 38, who sold ‘extreme’ bondage chemsex customers meth and date-rape drug GHB from his apartment is jailed for six years

A masseuse who ran a Soho sex den has been jailed for six years on charges relating to the supply of drugs and possessing stun guns and false passports, police said.

Flavien Cortes, 38, was found to have supplied large amounts of drugs while offering bondage-themed sexual services to men from his Wardour Street apartment.

Police told Southwark Crown Court a search of the flat in January uncovered 40 bottles of gamma butyrolactone (GBL), several Tasers, a number of false passports and a variety of class A, B and C drugs – as well as £30,000 in cash. 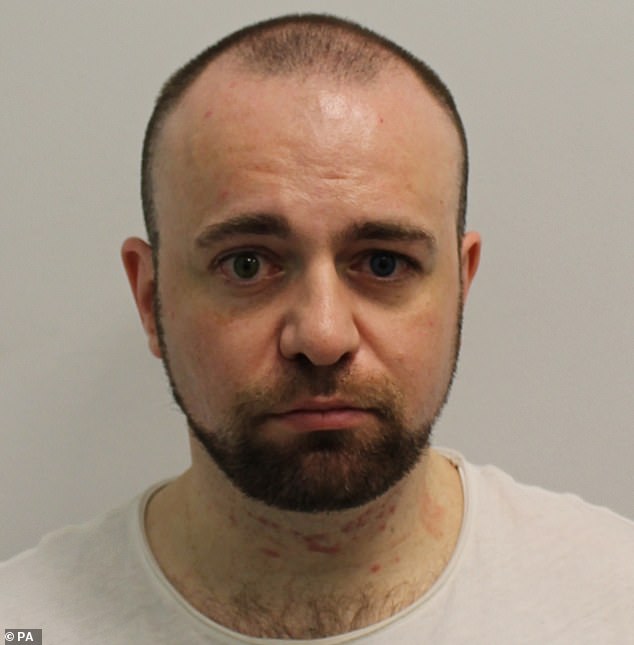 Metropolitan Police undated handout photo of masseuse Flavien Cortes who ran a Soho sex den has been jailed for six years at Southwark Crown Court on charges relating to the supply of drugs and possessing stun guns and false passports, police said 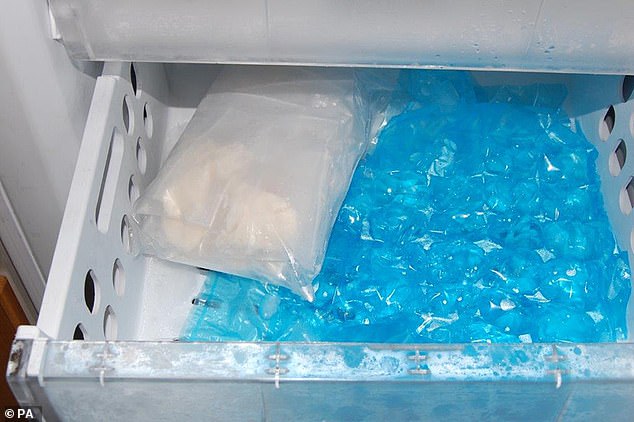 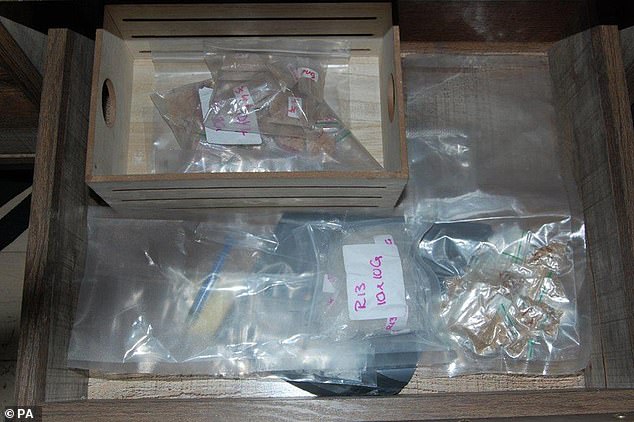 Cortes pleaded guilty prior to sentencing via videolink from prison to 19 charges.

Fourteen charges related to possession and intent to supply class A, B and C drugs.

Police told the court officers had found the two Taser-style firearms disguised as a cattle prod and a torch, as well as passports in different names.

Officers also discovered a room in the flat designed for sexual activity, with equipment used to record and share activity online. 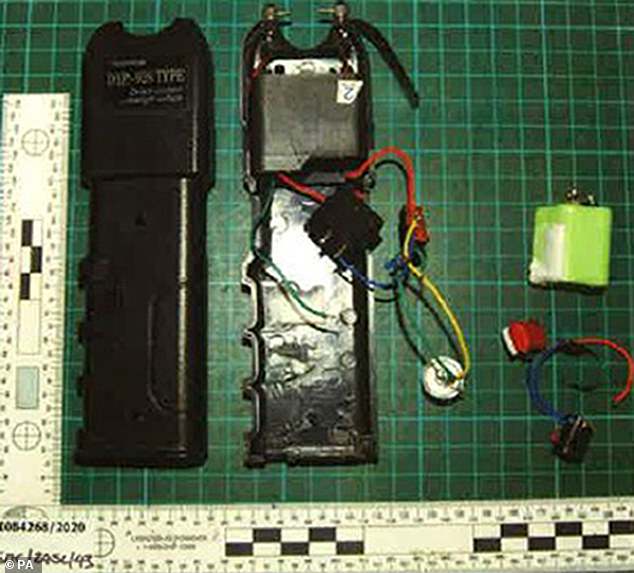 Among the items seized from Cortes’ Soho sex den was a taser (pictured). Cortes was caged for six years at Southwark Crown Court today on charges relating to the supply of drugs and possessing stun guns and false passports, police said 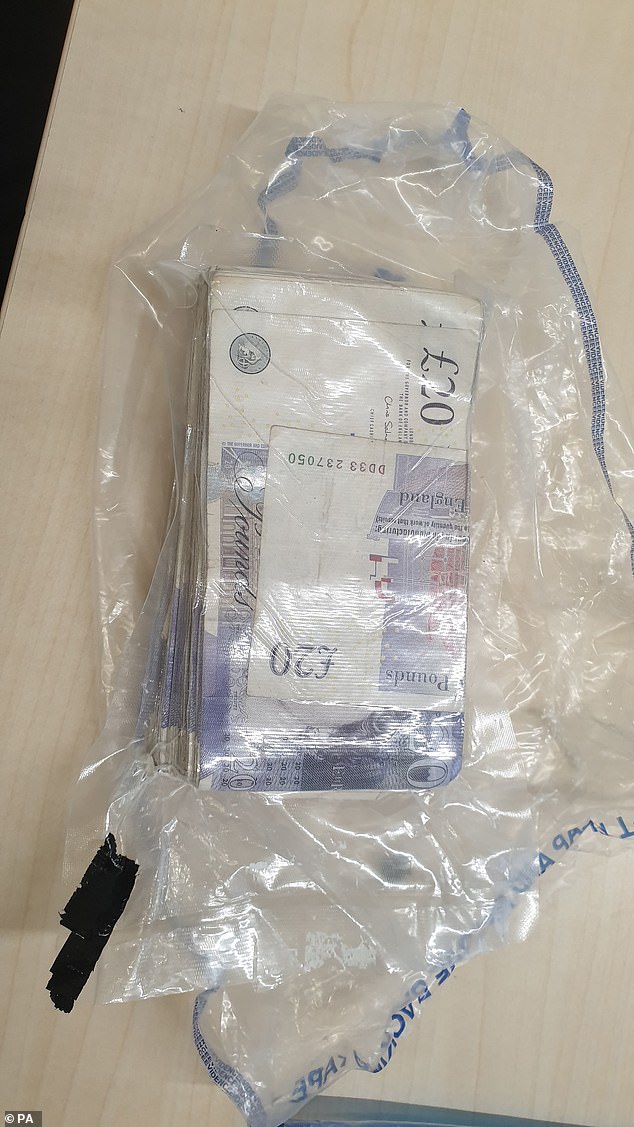 Among the items seized were several wads of cash like the one pictured above. Cortes, 38, was found to have supplied large amounts of drugs while offering bondage-themed sexual services to men from his Wardour Street apartment

Cortes was sentenced to six years and eight months in prison.

Officers also uncovered two stun guns disguised as torches, a wad of cash and two passports belonging to other men.

The French national moved to the UK aged 18 and built a career in hospitality working for members club Balans Soho Society and as a manager at a London branch of the Hilton Hotel.

Cortes charged customers up to £1,500 for extra services while operating a massage parlour out of his Soho flat.

He amassed a pharmacy of class A drugs including cocaine, crystal meth, MDMA and popular chemsex drug GBL which he sold to punters.

Gregor McKinley, prosecuting, said officers were surveilling the premises when a client left with a packet of crystals and admitted he had bought them from Cortes.

Officers entered to find cameras connected to two iPads monitoring activity inside and outside the flat along with a desk strewn with drug paraphernalia.

The French national appeared at Southwark Crown Court on Tuesday via video-link from HMP Wandsworth and admitted 19 offences. 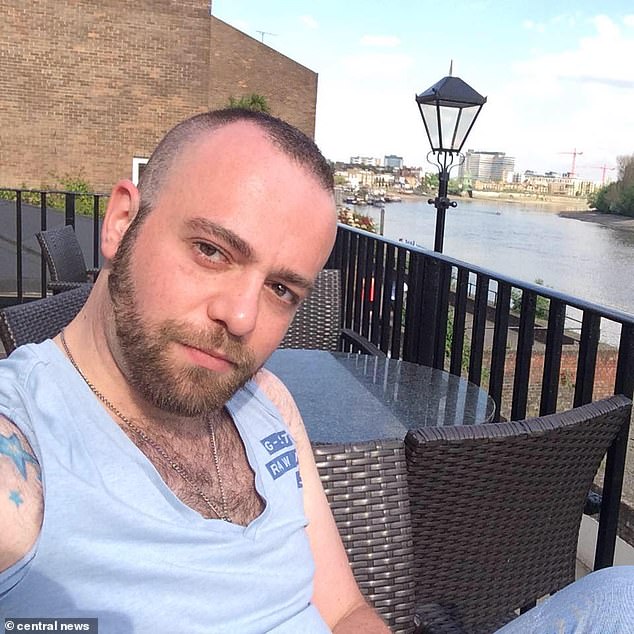 Flavien Cortes, 38, (pictured) made at least £30,000 from his ‘life of hedonism’ while working as a masseuse from his flat in Soho between 2018 and January this year

Mr McKinley said: ‘At about 7.30pm the police who were keeping watch on defendant’s address and saw a man leaving in possession of a small bag of white crystals.

‘When he was stopped by officers he admitted straightforwardly that he’d been to that address earlier in the day that the crystals were crystal meth and that he’d bought them from Mr Cortes for £50.

‘Police entered and searched the premises and large quantities of different kinds of drug were found.

‘The weight of the crystal meth was just over 156g. The total amount of cocaine was about 60g.

‘There was a desk in the middle of the flat and that’s where the two tasers were found very close to where he was working and making other supplies of drugs.

‘There was also a rudimentary security system in place there were cameras outside the address linked up to two iPads.

‘There were also several consignments of vacuum packed money.

‘These were notes and a quick estimation by the officers was about £30,000. Also found were the false documents and a number of credit and debit cards in different names.

‘Cortes was arrested there and then.

‘More controversially, the police found a clipboard which they say looks to them like a rota with names and times and it’s the police suspicion that these are people who may be working for or with Mr Cortes. 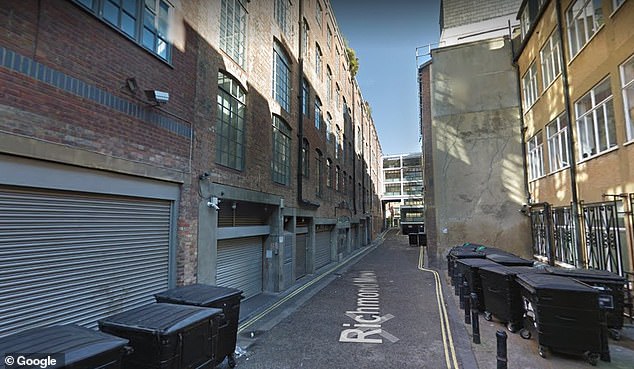 ‘They say they were undertaking cleaning and maintenance jobs for Mr Cortes rather than any form of drug dealing.

‘Mr Cortes was arrested and interviewed the following day. He gave a no comment interview and indicated not guilty pleas at the magistrates’ court.

‘Given the sophistication of the operation the crown say the starting point should be at the upper end (of sentencing).’

Nick Corsellis, QC, defending, said the flat had been hooked up with CCTV for Cortes’ own protection and the tasers were kept to ward off potential attacks from customers.

‘He comes from France and has a conservative background, family, who when he told them aged 18 that he was gay was met with disapproval.

‘It led to him starting his life again here in London. He was a committed member of the leisure industry starting off as a waiter, then a barman and indeed achieving the levels of responsibility to becoming a manager of the Hilton Hotel.

‘Unfortunately in late 2016 he contracted pneumonia.

‘This led to a six-month period of incapacitation, multiple admissions to hospital and intensive care which culminated in the loss of function in his right lung to a very significant degree and it is irrevocable there for his respiratory ability is very much reduced.

‘When he was fit enough he was not able to return to his occupation as a waiter because he wasn’t able to stand for long periods of time, carry a tray. 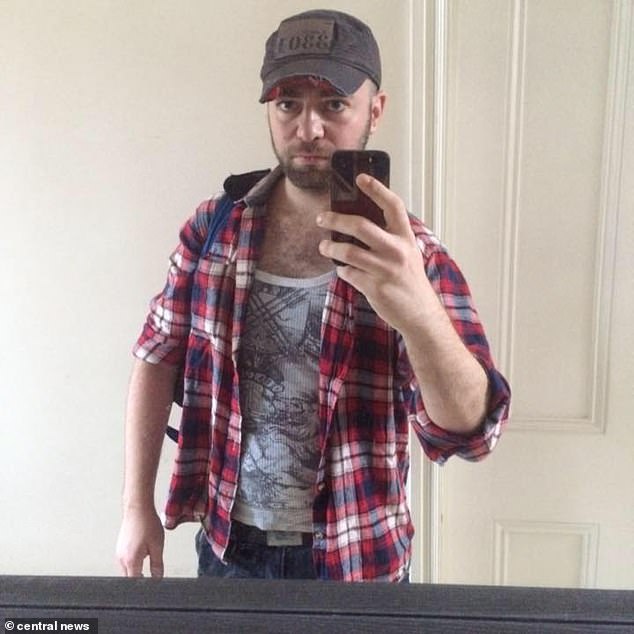 Cortes, a former Hilton Hotel manager was jailed on Tuesday for more than six years

‘In order to change his work he took up a massage business. You will see a variety of tax returns relating to his business in 2017 and 2018 whereby his success as a masseur was in the region of £1,500 a time.

‘What happened were his clientele were predominantly gay men and the massage business then evolved into the offer of sexual services.

‘The particular evolution of that meant that as you will have seen from the photographs in this case that it ended up with Mr Cortes offering a service which was particularly extreme in terms of bondage and restraint and so on.

‘The photographs rather tell it all with respect to what was in the flat. Part of that service was the provision of drugs to the clientele.

‘This was to consenting adults who wished to partake in them together with the sexual services that Mr Cortes was offering.

‘It’s also a fact that as you will have appreciated that there was CCTV within the premises as well as outside. That’s to protect himself.

‘The rota was for cleaners. His occupation meant that others needed to assist him and the cleanliness was an important factor to how his sexual services business was running.

‘This was a case where there was no delegation to other people or dealing on the street. His business was one to two people a day.

‘There was no method of advertising – it was only on recommendation through word of mouth in a fairly extreme section of the gay community.’

Mr Corsellis said at one point Cortes had been earning so much that Metro bank refused to deposit his money as the deposits were deemed suspicious.

‘The money that was found near his desk but also in the safe.

‘His bank account was terminated because of the levels of cash he was depositing. The Metro bank decided he was not someone it wanted to be their customer. He had nowhere to deposit his cash.

‘The cash that was seized gives an indication as to the level of his business, we accept, but also over the previous months or so.

‘The second taser was in fact not operational. The tasers have never been used, they were there for his potential protection.

‘May I ask that the court shows some leniency towards him given the rather exceptional circumstances of this case.’

Judge Alexander Milne told Cortes: ‘You are in a position of perhaps more responsibility than a street dealer. This falls towards the top end of significant involvement.

‘The total will be six years and eight months imprisonment.

‘You are a man with little criminal activity in the past. Though you were vulnerable, to some degree that is a vulnerability of your own making.

‘In relation to the £30,000 I order that to be forfeited and the drugs and tasers to be destroyed.’

He was sentenced to six years and eight months imprisonment.