Cold weather struck an ultramarathon in northwestern China, killing twenty-one people and sparking anger online at the lack of planning, according to reports.

The race began 9 a.m. local time Saturday in the northwestern province of Gansu.

An ultramarathon is any long-distance race that extends beyond the standardized (since 1921) marathon length of 26 miles 385 yards. The race in China was set for 62 miles through tough terrain that included cliffs and canyons, Reuters reported.

Forecasts had called for wind and rain, but nothing as serious as what racers met. 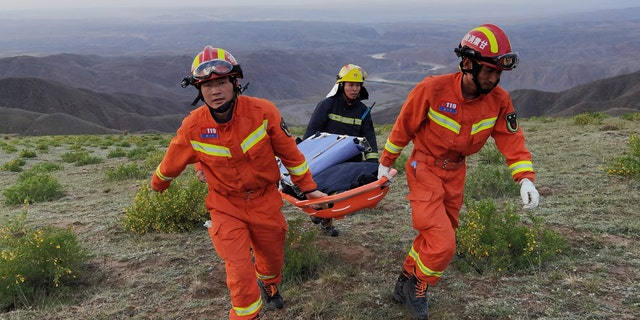 Rescuers carrying equipment as they search for runners who were competing in a 100-kilometre cross-country mountain race when extreme weather hit the area, leaving at least 20 dead, near the city of Baiyin in China’s northwestern Gansu province.
(GettyImages)

Three hours after the start, temperatures plummeted as hail, high winds and freezing rain struck the course. Temperatures hit a low of 43 degrees Fahrenheit – not including wind chill.

More than 1,200 rescuers, assisted by thermal-imaging drones and radar detectors, deployed across the area, recovered151 runners safely. Eight were injured. The remaining racers were found dead at various points along the course, with the latest victim discovered Sunday morning.

Rescue efforts faced further complication due to a landslide after the rain, The New York Times reported.

The search continued into Sunday morning, with further temperature drops making the search more difficult. Many of the runners suffered from hypothermia.

“Why didn’t the government read the weather forecast and do a risk assessment?” one commentator wrote.

“This is totally a man-made calamity. Even if the weather is unexpected, where were the contingency plans?”

“As the event organizer, we feel deeply guilty,” Mr. Zhang said. “We express our sorrow for the victims and our deep condolences to the families of the victims and the injured.”