The millionaire tycoon behind the AMT coffee chain could face bankruptcy over a £1.5m debt to the sister-in-law he branded a ‘gold digger’.

Brothers Alistair, Angus and Allan McCallum-Toppin turned their coffee cart in a shopping centre in Oxford into thriving nationwide chain AMT turning over £20million a year.

The brothers were equal partners in AMT – named after their shared initials – until Angus tragically died from cancer, aged just 45, in 2006.

Following his death, the family collapsed into ‘dysfunctional squabbling,’ and Angus’s widow Lucy was not paid her fair share.

She took the case to the High Court where she presented a bankruptcy petition targeting the company’s managing director Alistair, and the court found in her favour. 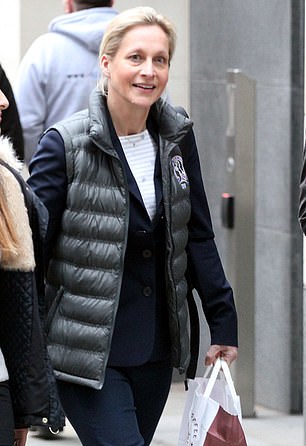 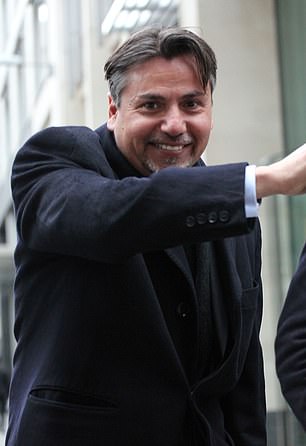 The millionaire tycoon behind the AMT coffee chain Alistair McCallum-Toppin (right, outside London’s High Court) could face bankruptcy over a £1.5m debt to his sister-in-law Lucy (left) who he branded a ‘gold digger’ 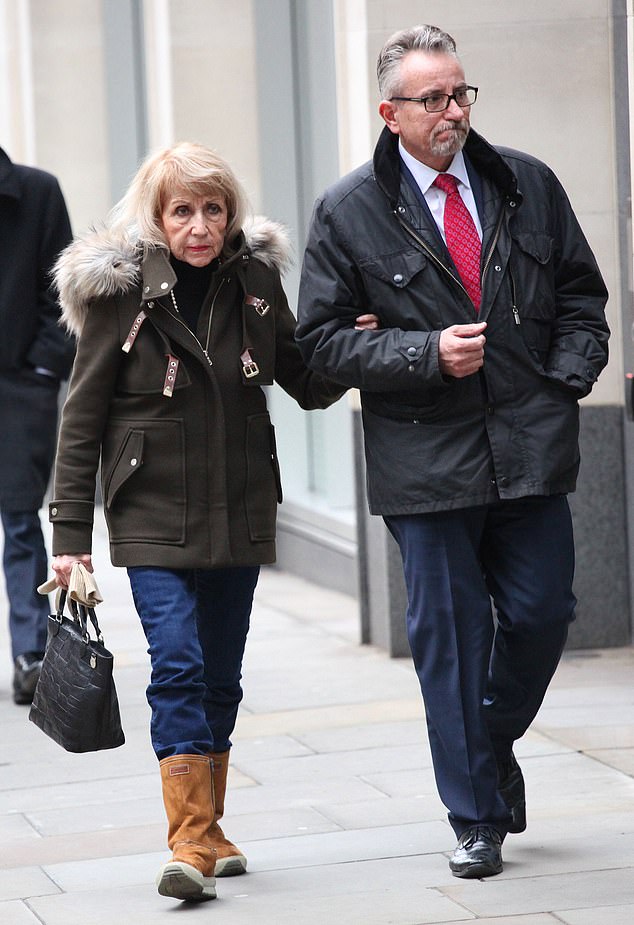 The High Court found that after his death, Angus’ tycoon brothers used the company as their personal ‘piggy bank’. Pictured: Allan McCallum-Toppin and his mother Anna

The High Court found that after his death, Angus’ tycoon brothers used the company as their personal ‘piggy bank,’ while the financial rights of his widow Lucy and their two children were ‘ignored’.

Lucy, 44, was regarded as a ‘gold digger’ by Alistair, 52, said Judge Paul Matthews.

After a High Court battle last year, the brothers were ordered to personally buy Lucy and the children out of the company, putting them in line for a payout that lawyers said could be worth ‘up to £7million.’

Alistair and Allan were ordered to make a £1.5million interim payment in March last year.

In July, Lucy presented a bankruptcy petition targeting Alistair – who is managing director of the chain – as the money had not been handed over.

In the High Court, Judge Daniel Schaffer dismissed Alistair’s objections to the petition, leaving him facing a bankruptcy order if the debt to Lucy is not paid. 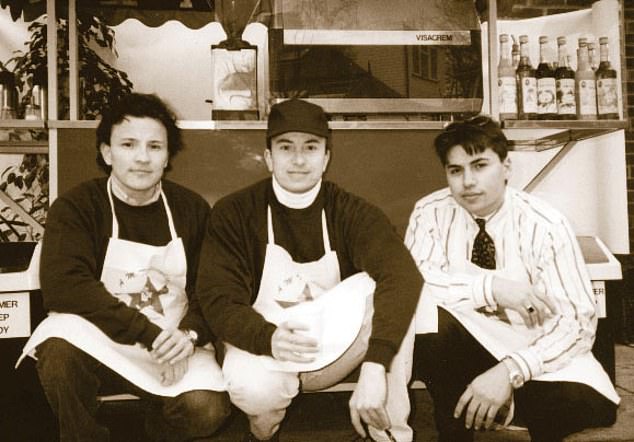 In his judgement, Mr Schaffer said Alistair admitted making ‘considerable efforts’ to make the payment, but ‘on the face of the evidence […] appears to be unable to discharge the petition debt.’

The court heard that the three brothers and their dad Alexander set up AMT Coffee in 1993, at a time when espresso-based coffee was not a part of everyday life on the go in the UK.

From just one espresso machine on a street cart outside Oxford’s Westgate shopping centre, the company grew and now has over 50 coffee bars across the UK and Ireland, mostly at railway stations.

The three brothers and their dad Alexander initially each had a 25 per cent share in the company.

After their father died in 2001, ownership was split into seven shares, with the brothers holding two each and their mother, Anna, being handed one.

They signed an agreement in 2005, designed to ensure the three brothers shared the profits made by the company equally.

And following Angus’ death, his two-sevenths share in the company went into his estate, for the benefit of Lucy and their two children.

From winning family business to ‘bitter’ court fight: The history of AMT coffee

Alistair McCallum-Toppin arrived in Oxford from Seattle in 1993 and noticed a lack of espresso-based coffee in the UK.

He – along with his brothers Angus and Allan – founded AMT coffee, named after the brothers’ shared initials.

They started off with one espresso machine on a street cart outside Oxford’s Westgate shopping centre, which initially struggled to stay afloat.

But their popularity quickly grew, and the brothers opened their first train station shop in 1994.

Since then, the brothers’ business grew and they now have 450 shops nation-wide.

The brothers were equal partners until Angus tragically died from cancer, aged just 45, in 2006.

Following his death, the family collapsed into ‘dysfunctional squabbling,’ and Angus’s widow Lucy was not paid her fair share.

She took the case to the High Court where she presented a bankruptcy petition targeting the company’s managing director Alistair, and the court found in her favour.

But while the three brothers had ‘stuck together’ despite frequent ‘disagreements’ while Angus was alive, after his death Alistair and Allan fell to ‘constant feuding’, Judge Paul Matthews found after last year’s High Court trial.

‘Internecine warfare’ raged between the surviving brothers, who each began to raid the company for more and more money, while failing to pay any cash at all to Lucy and the children after 2008.

At the same time, Lucy was ‘excluded’ from important company meetings, the judge added.

In the years between Angus’s death and 2015, the brothers took out over £1million between them in ‘entirely informal’ directors’ loans, creating ‘a significant credit risk for the company,’ said the judge.

Money from those loans was spent by the brothers on personal expenses, including home improvements and flights, the judge said.

Over the same period, the judge said, on top of the loan account, Alistair had paid himself a salary and bonuses that were on occasion ‘far too high’ and were ‘excessive in seven out of the ten years following his brother’s death.’

Allan, 56, also took ‘excessive’ pay from the company in six out of the ten years after Angus died.

Meanwhile, no payments representing salary or other benefits which Angus would have earned were paid after July 2007 to Lucy and the kids, although a £121,000 pension pot was paid to them in 2008.

In a damning judgment, Judge Matthews slammed the conduct of the surviving brothers and noted the ‘dysfunctional relationship of this family’.

He said: ‘It is clear that, during the time they have controlled the company after the death of Angus, Allan and Alistair have used the company as a piggy bank to make personal expenditure at a high level on their behalf.

‘Once Angus had died, his estate was largely ignored and his widow Lucy excluded. They ignored Lucy’s existence as best they could and continued their own course.’

He said Alistair had ‘refused to treat the estate holding Angus’ shares in the same way as he would have considered Angus himself.’

He continued: ‘Moreover, there is evidence that he saw Lucy as a gold digger…I accept that he did not want to declare dividends that would benefit her. 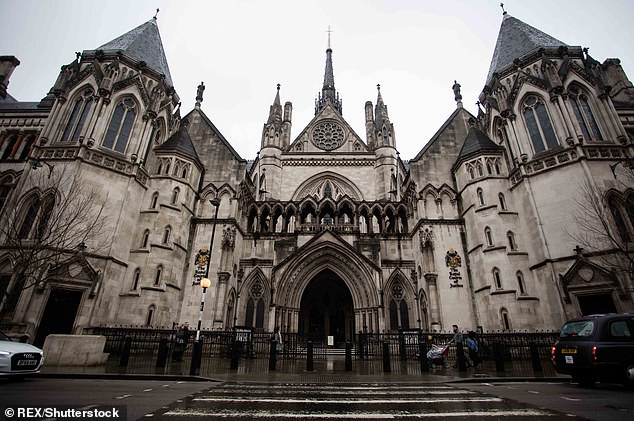 After a High Court (pictured) battle last year, the brothers were ordered to personally buy Lucy and the children out of the company, putting them in line for a payout that lawyers said could be worth ‘up to £7million’

‘The conduct […] of the respondents has gone […] to enrich themselves at the expense of the company.

‘There were then incessant squabbles between Alistair and Allan umpired, if unwillingly, by their mother.

‘No enterprise run on commercial principles would have organised the remuneration of directors on such chaotic lines,’ he added.

He found that the surviving brothers’ behaviour had been ‘unfairly prejudicial’ to Lucy and Angus’ estate as minority shareholders.

The judge ordered Allan and Alistair to buy out the shares formerly owned by their late brother, which lawyers said last year could be worth ‘up to £7million.’

The order for the £1.5million interim payment was then made in March last year, and Lucy lodged the bankruptcy petition last July when the cash was not forthcoming.

Amongst other arguments, Alistair had protested that a statutory demand for the £1.5million had been made by Lucy in her role as one of the Trustees of the Angus McCallum-Toppin Will Trust.

The bankruptcy petition was presented by her as one of the executors of Angus’ estate.

He claimed that, as no debt was owed to the Trustees, the statutory demand was flawed and a bankruptcy petition could not be presented by the executors, as no demand had been made by them.

Rejecting Alistair’s arguments, Judge Schaffer said Lucy had been acting in a ‘dual capacity’ as both one of the executors and a trustee and that she won the case against her brothers-in-law ‘in that dual capacity.’

‘An interim payment ordered by the court is clearly a debt,’ the judge went on.

‘I am aware that there was a bitter family dispute. Following the death of Angus, any possible sale of the company was hampered by the “internecine war between the surviving brothers”.

‘That “war” has, in my judgment, transmuted to this dispute. That is regrettable.’

The judge went on to dismiss Alistair’s objections to the bankruptcy petition, but adjourned the making of an order declaring him bankrupt.

‘In the light of the conclusions I have reached in dismissing all objections raised to the petition, normally a bankruptcy order would be made when judgment is handed down,’ the judge said.

‘I will give the debtor the opportunity to seek a deferral of that order on an application to adjourn the petition, to facilitate payment of the petition debt.’