Three times as many coronavirus patients have died at a hospital in London as the NHS has reported in its official count.

King’s College Hospital Trust has handled at least 31 deaths, according to an internal memo, while the NHS’s official figures list just 11 for the hospital.

The difference raises the prospect of the UK’s true coronavirus death count being considerably higher than the official 1,228 which was announced yesterday.

Deputy chief medical officer for England, Dr Jenny Harries, has admitted there is a lag of at least one day between the deaths happening and their being reported.

Families must all be informed, she said, and data across the NHS and Government must match up before any official announcement can be made.

Statistics released last weeks showed some deaths date back up to 10 days before they are revealed in national statistics.

The UK is today entering its second week of near-total lockdown and at least 19,522 people have tested positive for the coronavirus after 127,737 tests. 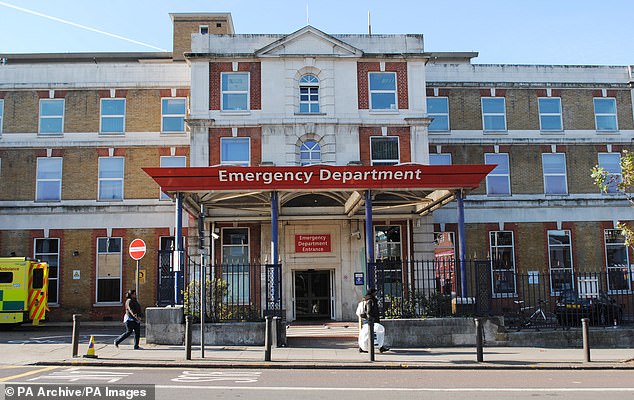 King’s College Hospital in south London has had around three times as many deaths as official figures let on, according to an internal memo read out on live television yesterday 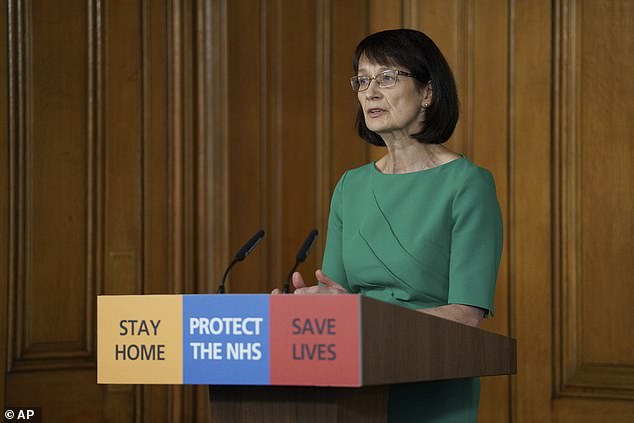 Dr Jenny Harries, the deputy chief medical officer for England, said there was a lag in publicly announcing the data and this would take longer as the death toll gets larger

In the Government’s daily coronavirus briefing yesterday a Channel 4 journalist read out an internal memo sent to staff at King’s College Hospital Trust in south London.

The reporter, Simon Israel, said via video link: ‘A message sent today to staff at King’s hospital trust said, and I quote, “The number of deaths being reported at King’s in national figures is below what they are experiencing. This is not just King’s, there are a number of other trusts and the centre has been made aware”.

‘At what point are we being given accurate, up-to-date figures on the numbers who have died?’

Britons should not expect to get back to ‘normal life’ for six months or even longer, the government’s deputy chief medical officer warned yesterday.

Dr Jenny Harries told a Downing Street press conference that people should not be viewing the coronavirus crisis as something that will blow over soon.

She said it will not be clear whether the ‘social distancing’ lockdown is working for another two or three weeks – after Easter – with deaths set to rise further.

But even if the draconian restrictions do succeed in ‘squashing’ the peak of the outbreak, reverting to a ‘normal way of life’ immediately would probably lead to a disastrous new spike in infections.

Speaking after the official UK coronavirus death toll rose by 209 in 24 hours from 1,019 to 1,228, Dr Harries said people had taken ‘quite some time’ to get used to social distancing, but there was now evidence the country was obeying the rules.

She added: ‘The issue of the three weeks is for us to review where we are and see if we’ve had an impact jointly on the slope of that curve.

‘But I think to make it clear to the public if we are successful we will have squashed the top of that curve, which is brilliant, but we must not then suddenly revert to our normal way of living that would be quite dangerous.

‘If we stop then all of our efforts will be wasted and we could potentially see a second peak. So over time, probably over the next six months, we will have a three-week review.’

Dr Harries said it was ‘plausible’ that the restrictions could need to in force longer than that.

Boris Johnson has previously voiced optimism that the UK can ‘turn the tide’ on the outbreak within ’12 weeks’. But government papers from scientific advisers have made clear they are anticipating a longer timeframe.

King’s College Hospital has officially recorded 11 coronavirus deaths, placing it around mid-table among NHS trusts around the UK.

The worst hit so far has been London North West University Healthcare trust in Harrow, where at least 55 people have died.

Before authorities can publicly confirm a death has taken place they must be certain that the patient had the coronavirus, which involves taking multiple tests, and also that the family have been notified and give their consent for basic information to be shared.

This process can take between days and weeks and, as more people die, the backlog becomes greater and the process slower, said Dr Jenny Harries.

At the Government briefing she said: ‘Clearly every death that we have is a really sad event… We have to make sure that when we’re reporting the family is content and knows and that all our data is absolutely accurate.

‘For any event like this, whether it be COVID, whether it was Ebola, whatever it is, there is always a time lag for us to check and evaluate that the data across the system is linked. We do not want to be misreporting data and having to correct it.

‘The public would not have confidence if we were doing that and as we have had, sadly, to register more deaths, that time period takes longer.’

Dr Harries said she was not aware of the memo from King’s College Hospital, and added: ‘For the reporting yesterday it will have been the deaths reported the previous day.

‘So it is inevitable that there will be a time lag – this is not an issue of transparency, it’s an issue of ensuring that all those families that need to know and all the parts of the system can consolidate the information and ensure it’s accurate for the public.’

The announcements are usually handled by Prime Minister Boris Johnson and his scientific and medical advisers, Professor Chris Whitty and Sir Patrick Vallance.

But Mr Johnson and Professor Whitty – along with Health Secretary, Matt Hancock – are now sick with the coronavirus themselves.

Expert who predicted just 5,700 may die from coronavirus in the UK says he was wrong

The expert who predicted 5,700 Britons would die from coronavirus now says that figure was underestimating the peril the pandemic poses.

Scientist Tom Pike from Imperial College claims that the UK is in a ‘dangerous state’ amid the Covid-19 crisis.

He calculated his original death rate based on the assumption that Britain would follow a similar pattern to Wuhan, China, where the virus originated.

His paper put Britain’s peak at 260 deaths a day – but that number has already hit over the weekend. 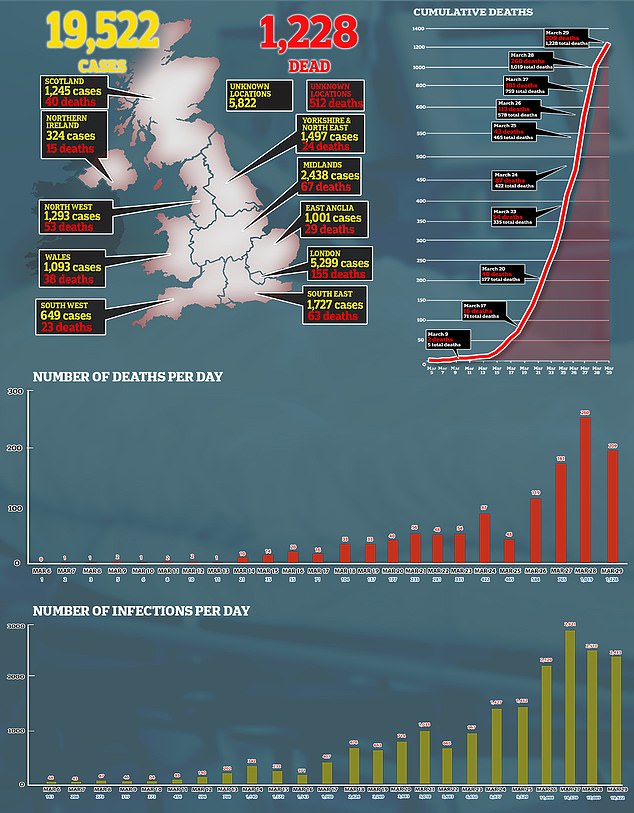 Professor Pike told The Times this changes his projections entirely, saying: ‘We don’t know where that uptick is going to go, or if it will keep going in the same direction

‘That’s critical in terms of the projected total deaths. If we don’t regain the Wuhan trajectory, each day we are building up more deaths. It’s a very dangerous state to be in.’

The paper by Imperial College London last week predicted that if the country follows the same trajectory as China did, it could see between 4,700 and 7,100 deaths.

And the peak of the outbreak, which could see between 210 and 330 people die in a single day, could happen next Sunday on April 5, it predicted. 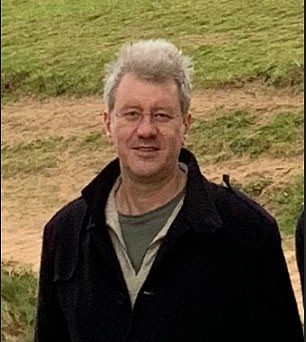 The study estimated that the true death figure would be around 5,700 – the figure is considerably lower than the 20,000 warned about in the doomsday scenario paper which convinced the Government to tighten up its efforts to stop the virus.

That claim, published by Professor Neil Ferguson, one of the Government’s leading COVID-19 advisers, warned that tens of thousands could die if people weren’t forced to stay at home.

A projection from the same university, developed by engineer Professor Tom Pike, compared eight countries’ death rates to China’s after Beijing put the nation into shutdown.

It comes after another paper this week said countries around the world have averted disaster by sending their citizens into lockdown and that 40million could have died if they hadn’t.

More than a billion people worldwide are now in some form of lockdown as the number of confirmed coronavirus patients has soared past 500,000 – but the dramatic measures are saving millions of lives, said another study from Imperial.

It said that almost the entire world population – seven billion citizens – could have been infected if the virus was allowed to spread unchecked. 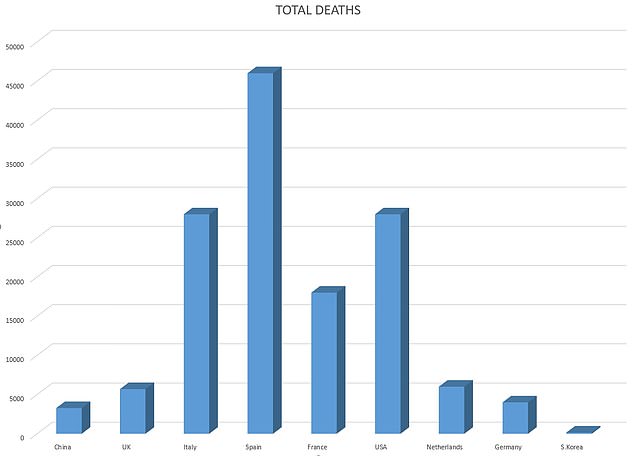 The data from last week’s paper showed the UK’s total deaths from coronavirus to be estimated at 5,700, if the country follows the path China took after introducing a lockdown there. Spain could now be the worst-hit nation with more than 45,000 deaths 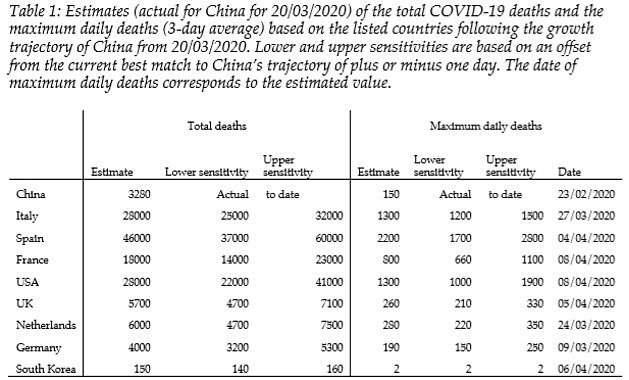 Last week’s estimates for the UK – if it followed the same trajectory as China – showed Britain could have 5,700 deaths, and the peak would be 260 fatalities on April 5