Coronavirus infection rates are rising in ALL age groups under 65

Coronavirus infection rates are rising in ALL age groups under 65, Public Health England data shows with biggest surge in under-fives which ‘should be watched very carefully’

Coronavirus infection rates among all age groups under 65 have been on the rise since lockdown was eased, official data shows.

Among people aged 15 to 44 in England, the rate has increased by 35 per cent since July 5 – a day after ‘Super Saturday’ when bars, restaurants and cinemas reopened and a large chunk of the workforce returned to work.

A combination of people having more social interactions and a ramping up of widespread testing is likely behind the rise, experts say.

The latest Public Health England data shows weekly infections have jumped by 40 per cent in infants during the same time period.

But cases in this age group are still relatively rare, with just 3.8 youngsters per 100,000 being diagnosed per week compared to 2.7 at the start of July.

Professor Paul Hunter, an epidemiologist at the University of East Anglia, told MailOnline the reopening of nurseries and pre-schools could be to blame.

He warned: ‘I suspect that young children may be more infectious than we have assumed. This is clearly something that needs to be watched very carefully.’ 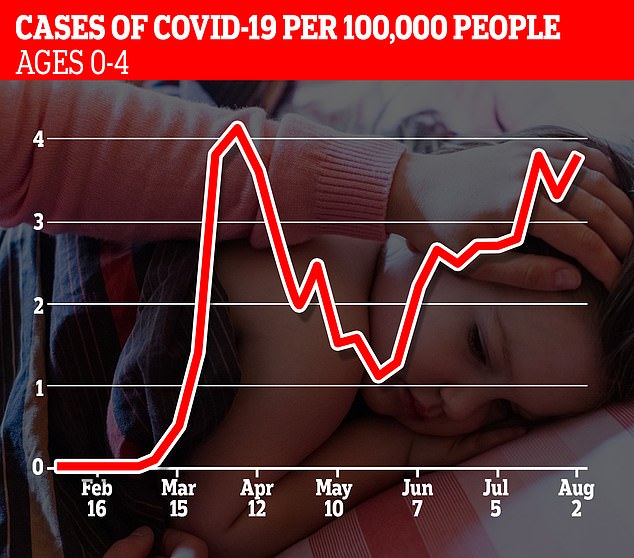 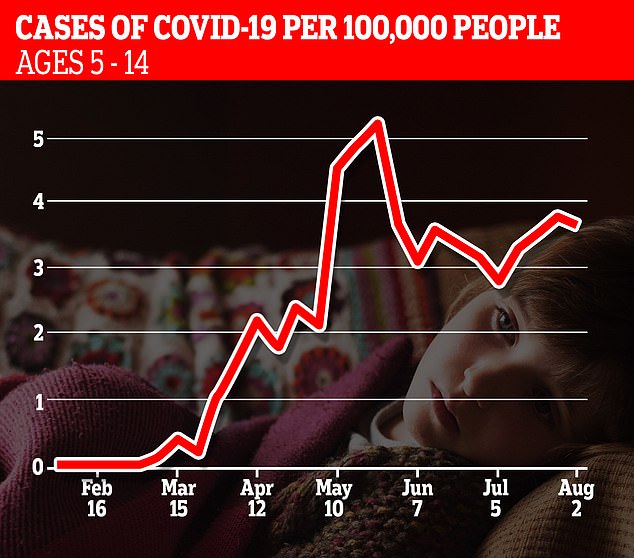 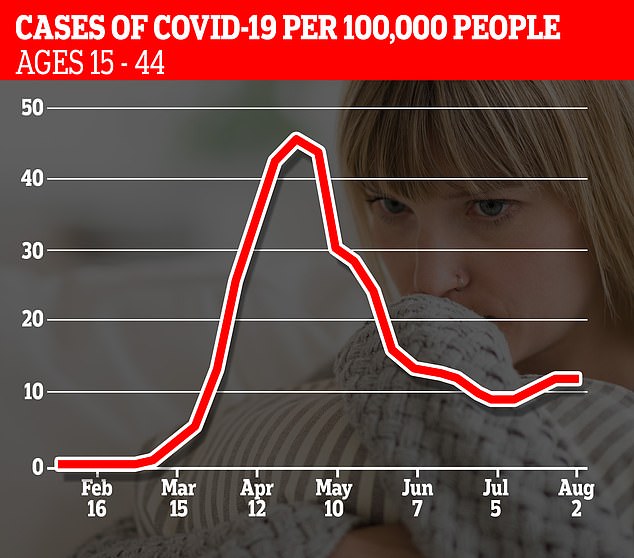 Among people aged 15 to 44 in England, the rate has increased by 35 per cent since July 5 – a day after ‘Super Saturday’ when bars, restaurants and cinemas reopened and a large chunk of the workforce returned to work 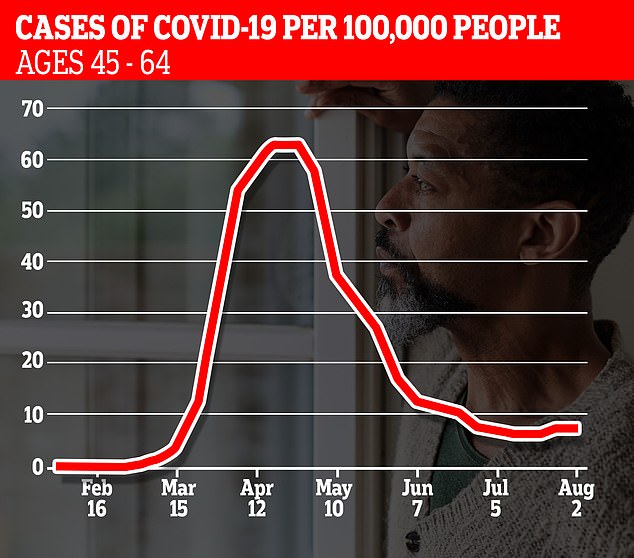 The report also showed that Covid-19 infection rates were falling in all age groups over 65 – who are most at risk of falling seriously ill with the disease.

Experts say it suggests more widespread testing is picking up on younger people who were previously being missed when swabs were reserved for high risk patients.

As of last week, this had shrunk to 13.6, which is still the highest in any age demographic, which will be largely driven by routine testing in care homes.

Like a lot of countries, Britain struggled to quickly ramp up its testing capacity during the worst of the epidemic. 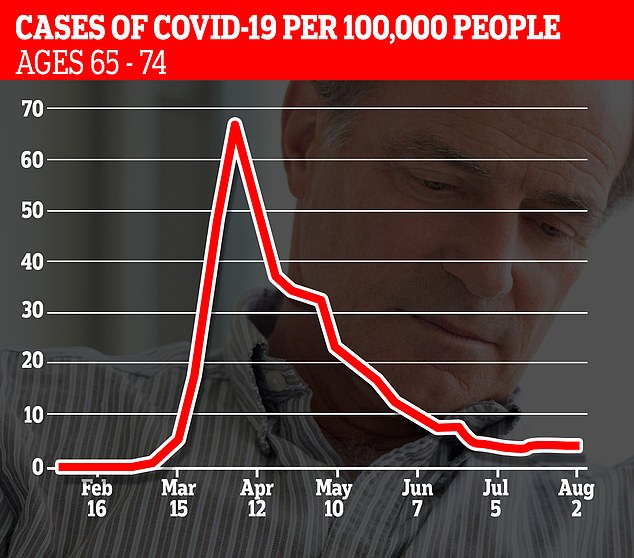 The report also showed that Covid-19 infection rates were falling in all age groups over 65 – who are most at risk of falling seriously ill with the disease. They dropped from 4.5 to 4.2 in Brits aged 65 to 74 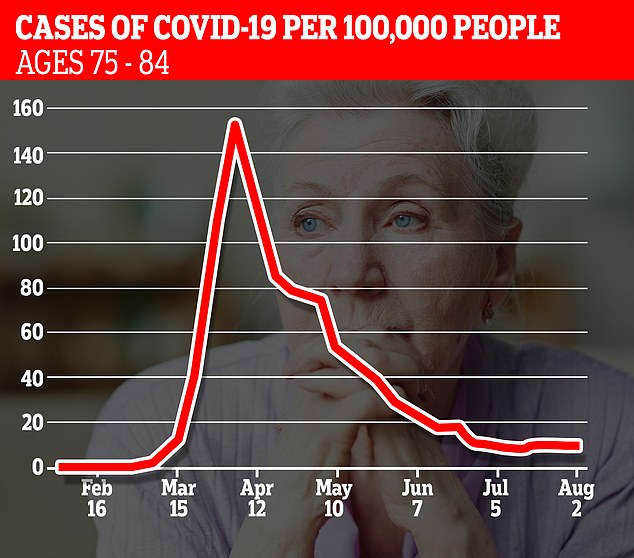 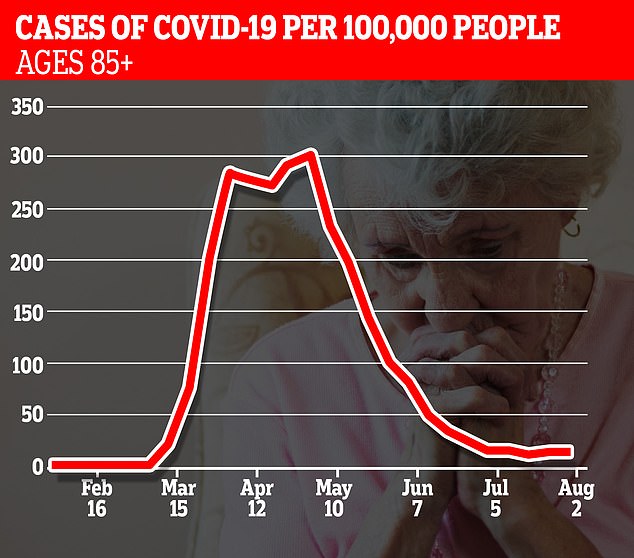 Covid-19 deaths in England and Wales are the lowest in 19 WEEKS, official data shows – but there are still more people than average dying in their homes

The number of people dying from coronavirus in England and Wales has dropped to its lowest level in 19 weeks, official figures show.

Covid-19 was mentioned on the death certificates of 193 fatalities registered in the week ending July 31, according to the latest report from the Office for National Statistics.

It marks the lowest number of deaths linked to the virus since the week ending March 20, four days before lockdown, when the ONS reported 103 deaths. Deaths have now been at pre-lockdown levels for four weeks in a row.

Around a thousand people were dying from Covid-19 each day at the height of the UK’s crisis in mid-April and the official death toll now stands at 46,595.

But the Government’s death tally only includes victims who had a test confirming they had the virus, which differs from the ONS’ calculations which include all deaths where the virus was a suspected cause.

The ONS says there have been 51,779 deaths involving Covid-19 in England and Wales up to July 31, while official figures show there have been 4,208 in Scotland and 855 in Northern Ireland.

Together, these figures suggest there have so far been 56,842 deaths registered UK-wide with Covid-19 mentioned on the death certificate.

Today’s report also found that nearly 700 more people than average died in their homes in the last week of July, amid concerns Britons are still reluctant to use the NHS.

There were a total of 2,915 deaths registered in private homes in England and Wales – 676 higher than the five-year average.

Experts fear people are still hesitant to use healthcare either because they are afraid of catching the virus in hospitals and GP surgeries, or they don’t want to be a burden on the health service.

It meant only very sick people were swabbed for the virus and millions went undiagnosed.

Because elderly people were disproportionately falling severely ill with the disease, they were the ones who were tested, which skewed their infection rates upwards.

But case rates are now starting to level out as people with even mild symptoms are encouraged to take a test on the NHS.

The PHE data shows nearly 1.1million swabs were conducted in the last week alone in England and Wales – eight times more than were done each week in April.

There has been fierce debate about whether the UK is seeing a second wave of Covid-19 since cases started to rise last month.

A total of 1,062 people tested positive for the disease on Saturday – the largest rise in new cases in a single day since the end of June.

It came nearly a fortnight after Prime Minister Boris Johnson and Health Secretary warned that the virus was resurging across Europe and could very well hit the UK again.

But some of the UK’s most renowned scientists have rubbished the idea of a second wave and say the rising infections are simply the result of more testing.

Professor Heneghan, director of Oxford University’s Centre for Evidence-Based Medicine, and Professor Tim Spector, an epidemiologist based at King’s College London, both say there is ‘no evidence’ that cases are spiking anywhere in the UK.

Today’s PHE report showed the number of Pillar 2 tests – swabs done at drive-through centres, at home and in other various community settings – has risen drastically.

Over the last fortnight the number of weekly Pillar 2 tests has risen from 545,662 to 615,648 – which could explain the rise in cases in the last two weeks.

Professor Heneghan has previously told MailOnline that the number of swab tests given to the public through DIY kits sent in the post and at drive-through centres had soared by as much as 80 per cent in some areas of the country, including the North West, which was put into lockdown a fortnight ago.

Meanwhile, the number of people needing hospital treatment for coronavirus infections has plummeted since the peak of the outbreak in the UK.

While the number of patients in hospitals would be expected to drop as cases decline and the virus fades out, data suggests fewer people are getting severely ill.

The proportion of coronavirus patients who need hospital care – regardless of the true number – seems to be falling.

Since late April, when testing first started to become available outside of hospitals, the proportion of positive cases being hospitalised has dropped from around a quarter to less than 10 per cent, averaging seven per cent – just one in every 14 – over the past week. 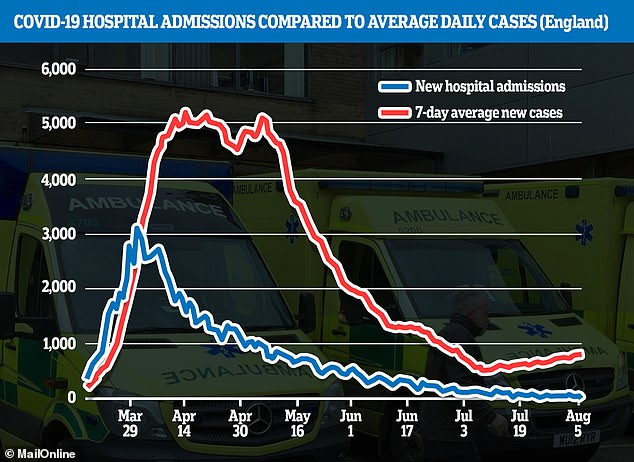 Hospital admissions are now making up a smaller percentage of total new coronavirus cases, data shows, falling from more than a quarter at the end of April, when widespread testing began, to less than 10 per cent in August

Experts say better treatments, more hospital capacity and some levels of immunity may have helped push down the need for hospital care.

Survival rates have improved, too, with eight in 10 intensive care patients now making it through their illness, up from fewer than half in April.

The NHS faces a huge backlog of non-coronavirus patients after emptying its hospital wards to prepare for a surge in people sick with Covid-19. Falling levels of hospitalisations could help the health service get back on its feet if the virus remains under control.

This has since plummeted by 96 per cent to 638 people in hospital on August 7, and 98 per cent to 57 people on ventilators.

Patients on ventilators are usually the most ill and have to be hooked up to the life support machine to help them breathe by forcing air into their damaged lungs.

The most new admissions to hospitals happened on March 31 when there were 3,099 people taken into hospital with the disease.

On August 5 – the most recent day for which there is data – just 21 people were admitted.

That was the lowest figure so far in the epidemic and represents just three per cent of the 820 new cases that had been diagnosed each day, on average, over the last week.

That percentage – the number of hospital patients compared to the average number of people diagnosed over the past week – shows approximately how many officially tested people become so ill that they need to go to hospital.

Testing for people outside of hospital first became available on April 23, at which time around a quarter of people testing positive were hospital inpatients.

This has now been consistently at 10 per cent or lower since July 29, suggesting fewer people are now getting severely ill.

Professor Anthony Gordon, an intensive care expert at Imperial College London, said vulnerable people – those more likely to end up in hospital – were more likely to have got ill at the start of the epidemic before, or early in, the lockdown.