Wealthy children of Venezuela’s ruling elite spread the coronavirus at a drug-fuelled party on a Caribbean island, sparking anger in the impoverished country.

Socialist president Nicolas Maduro admitted that ‘practically everyone at the party is testing positive’ after the virus spread on the Los Roques archipelago last month.

Glamorous young people were seen revelling on beaches in pictures shared by a group of artists who separately visited Los Roques to shoot music videos.

The artists crossed paths with the elite partygoers but say they were not guests themselves. It is not suggested that the people pictured below were guests at that particular event.

There are fears that a major outbreak in Venezuela would overwhelm a crippled health system, where hospitals already lack water, electricity and medical supplies. 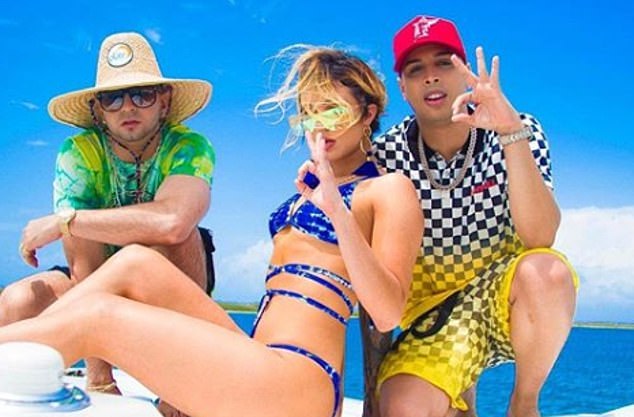 Three beachgoers pose for a picture in the Los Roques archipelago off Venezuela, where the coronavirus is believed to have spread last month 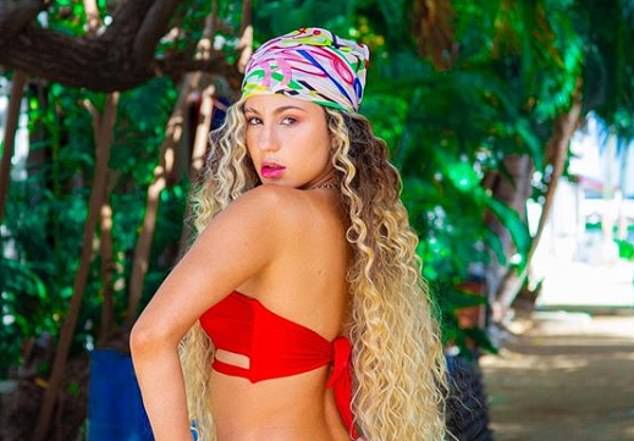 This picture from the Los Roques archipelago was posted on March 20, when Venezuelan president Nicolas Maduro said ‘practically everyone’ at a party there had tested positive 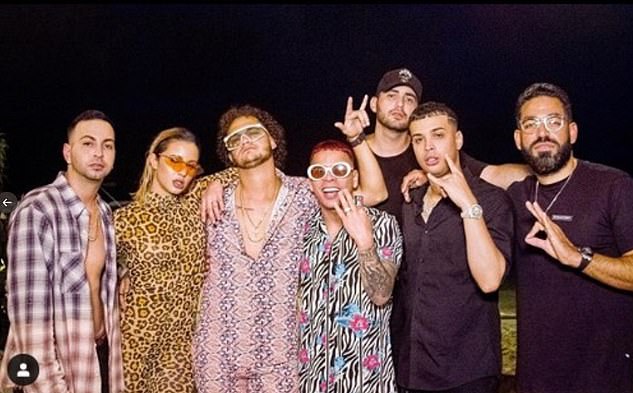 This picture was posted by Jesus Amoroso, the son of Maduro’s top anti-corruption official, who has been sanctioned by the U.S. for allegedly undermining Venezuela’s democracy

The elite party in mid-March featured some of Venezuela’s high-flying ‘Bolichicos’, the privileged offspring of the ruling elite who can afford to travel to the island while the rest of the country faces a food crisis.

It is not clear how many people got sick on the Los Roques archipelago, but the cluster of infections has raised concerns at the highest level of government.

‘There was a party, on an island, and practically everyone at the party is testing positive,’ socialist leader Maduro said on state TV on March 20.

Three days later, he downplayed it. ‘Who is going to criticise a party? They didn’t know they were sick,’ said Maduro, who was indicted by Washington last month on narcotics charges.

The discovery has angered people in the Caracas slum of Petare. Miguel Rengifo, who drives a motorcycle-taxi, said he’s appalled at reports of the rich throwing parties while the country is on lockdown.

‘We’re struggling to eat, but they’re running free, drinking, chasing girls without a second thought about the rest of us,’ the 38-year-old said. ‘Here, we are fighting just to get by.’

Los Roques is an oasis for the few who can afford it, including aides and relatives of top officials who travel by private plane to the band of tiny islands.

Parties in the cluster of tiny islands have become more popular, with Miami, Madrid and New York out of reach after U.S. sanctions cut off access to foreign bank accounts and easy travel. 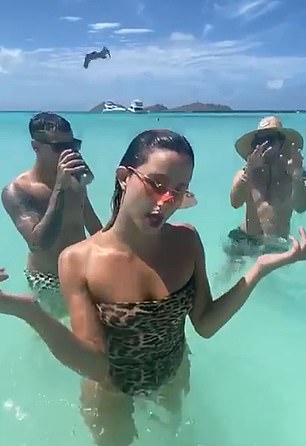 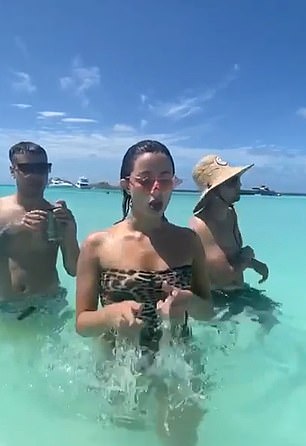 These pictures were posted by an artist called Nakary NK, who was on the island where to shoot a video. She says she was not involved in the elite party 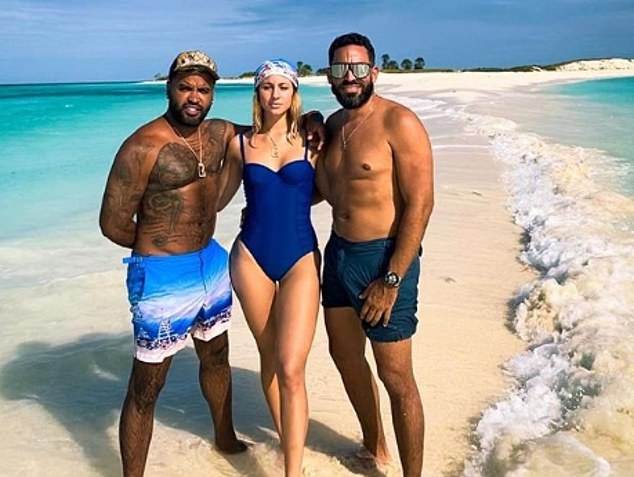 This picture was taken by the same artist. Revellers at the party crossed paths with Puerto Rican reggaeton artists on the island

The festivities in Los Roques were organised by several government-connected businessmen, according to two people familiar with the gatherings.

Among the young revellers was Jesus Amoroso, the son of Maduro’s top anti-corruption official, who has been sanctioned by the U.S. for allegedly undermining Venezuela’s democracy.

The two people said Venezuelan prostitutes from Madrid and London were flown in just before air travel was closed to Spain.

A smaller group crossed paths with two famous Puerto Rican reggaeton artists, Zion and Justin Quiles, who were seen on a sun-struck powerboat.

A spokeswoman said Zion and Quiles were in the islands to shoot a video and did not attend any social event. Both tested negative for the virus.

Pictures were also shared by an artist known as NakaryNK, who similarly said she was there for work and not involved in the party.

According to a third person familiar with the situation, a larger entourage set out in several boats to a popular spot that locals call ‘Corrupt Cay.’ They did not know the virus was spreading. 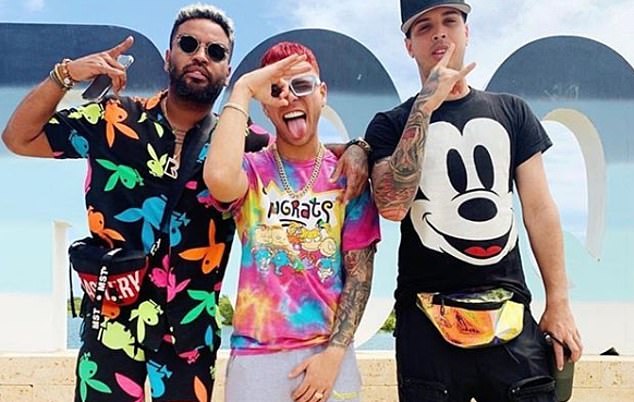 Some of the revellers appear to have crossed paths with a Puerto Rican artist known as Noriel, who posted this picture on the Los Roques archipelago 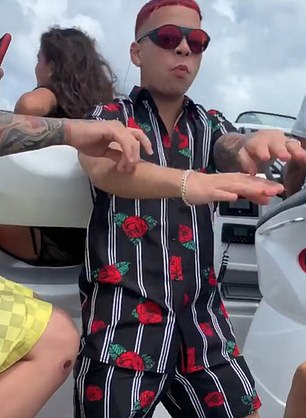 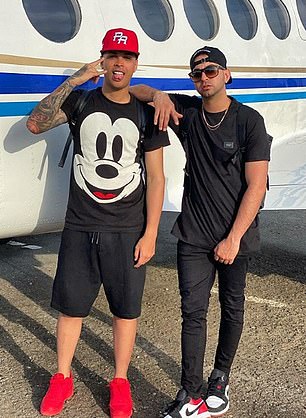 ‘Certainly one of the girls had the virus and nobody knew,’ a local resident and partygoer said in an audio message leaked on social media.

The person recounted how he and his girlfriend had to be evacuated with high fevers. He said six people tested positive for the virus.

The party ended with a hangover: Everyone was tested, and some, embarrassed, closed their social media accounts.

Others defended their actions. ‘Suck it gossipers,’ Jesus Amoroso said on Instagram with a photo showing him in front of a luxury SUV, middle fingers raised.

Last week, police arrested several people who were in Los Roques, including the suspected madam for the upscale prostitutes, after breaking up a party in an upscale Caracas home.

Officers found a handgun, ecstasy pills and eight women belonging to a suspected prostitution ring, according the police report.

Of the 18 arrested for violating Maduro’s ban on large gatherings, two tested positive for the virus, according to police.