Coronavirus 'stays in the body for more than a MONTH'

Coronavirus stays in the body for more than a MONTH after you catch it and people should be re-tested after four weeks before being given the all-clear, scientists say

People still have traces of the coronavirus in their bodies more than a month after they catch it, according to a study.

Because of this, scientists say patients should be retested at least four weeks after first being diagnosed with the illness before being given the all clear.

Research that followed more than 1,100 people in a badly-affected region of Italy discovered that the average time to ‘viral clearance’ was 31 days.

The scientists said that even if someone appeared to have recovered and didn’t have symptoms any more, there was still a strong chance they had the virus – or fragments of it – in their bloodstream and some of them might be infectious.

It has been unclear how long the body takes to get rid of Covid-19 and many people report still suffering for months after their diagnosis, while others only feel ill for a couple of days.

There are also growing concerns that many positive test results being produced in the UK are coming from people who aren’t actually contagious or ill but have chunks of the virus still circulating after they have recovered. 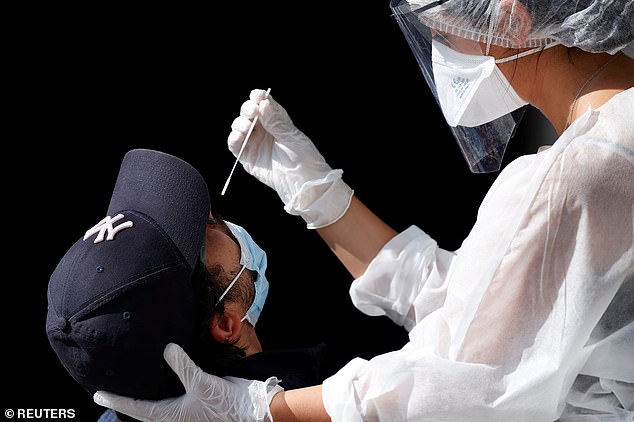 Swab tests are the most reliable way of knowing whether someone has Covid-19 because they pick up traces of the coronavirus in the airways, where it causes infection (Pictured: A health worker tests a man in Paris, France)

Researchers at the local health department in Reggio Emilia, northern Italy, looked at the test results from residents in the area.

They considered 1,259 patients who had received a positive test and then a later negative test, showing they had ‘received viral clearance’ – that is, they were given the all-clear after an earlier diagnosis of Covid-19.

The average time it took to reach this viral clearance was 31 days.

The strings of tests showed that people continued to carry the virus for weeks after they were first diagnosed.

Among these people, 704 people (60.5%) achieved viral clearance at some point within the 38-day window.

But only 79 per cent of those tested negative a second time, suggesting that a fifth of negative ‘all clear’ results were wrong.

The researchers said that re-testing people to see if they had cleared the virus would produce false results if it was done too soon after the initial positive test. They suggest waiting at least four weeks to see if someone has cleared the virus.

People who are tested too soon and wrongly told they’re Covid-free could risk spreading the disease to others, the scientists said.

Dr Francesco Venturelli and colleagues said: ‘To avoid generating secondary cases, either the isolation period should be longer [30 days from the start of symptoms] or at least one follow-up test should be done before ceasing isolation…

‘But the evidence on the risk of transmission during the [Covid-positive] phase characterised by a positive [swab test] is weak, and current serological data have not provided any additional insight.

‘Furthermore, current epidemiological evidence of transmission has been influenced by how quarantine has been managed thus far.’

In Britain people do not have to self-isolate after receiving a negative test even if they have symptoms.

And they can also stop isolating 10 days after testing positive, without the need for another test to see if they are still carrying the virus.

The research was published in the British Medical Journal Open.

ARE THERE LONG-TERM SYMPTOMS OF COVID-19?

Most coronavirus patients will recover within a fortnight, suffering a fever, cough and losing their sense of smell or taste for several days.

However, evidence is beginning to show that the tell-tale symptoms of the virus can persist for weeks on end in ‘long haulers’ — the term for patients plagued by lasting complications.

Data from the COVID Symptom Study app, by King’s College London and health company Zoe, suggests one in ten people may still have symptoms after three weeks, and some may suffer for months.

For those with more severe disease, Italian researchers who tracked 143 people who had been hospitalised with the disease found almost 90 per cent still had symptoms including fatigue two months after first falling unwell.

The most common complaints were fatigue, a shortness of breath and joint pain – all of which were reported during their battle with the illness.

Another study in Italy showed one in ten people who lose their sense of taste and smell with the coronavirus – now recognised as a key sign of the infection – may not get it back within a month.

The study, published in the journal JAMA Otolaryngology – Head and Neck Surgery, involved 187 Italians who had the virus but who were not ill enough to be admitted to hospital.

The UK’s Chief Medical Officer Professor Chris Whitty has said the longer term impacts of Covid-19 on health ‘may be significant’.

Support groups such as Long Covid have popped up online for those who ‘have suspected Covid-19 and your experience doesn’t follow the textbook symptoms or recovery time’.