A scheme to use facial recognition software to scan pupils in school canteens has been suspended after privacy concerns were raised by Britain’s data watchdog.

Nine schools in North Ayrshire in Scotland became the first in the UK to start using the system on a long-term basis last week after a pilot project in Gateshead last year.

The controversial technology has been pitched as making the payment process for meals quicker and more hygienic than using cards or fingerprint scanners.

But its rollout was paused just days after its launch after concerns were raised by privacy groups and the Information Commissioner’s Office. The ICO responded to the plans by saying that organisations should consider a ‘less intrusive’ approach.

Separately, a school in Ashton-under-Lyne, Greater Manchester, has decided to drop its rollout of a similar system in response to the ICO’s concerns about intrusiveness.

The Department for Education has issued guidance to UK schools on regulation over the use of facial recognition technology, but it is ultimately up to the school. 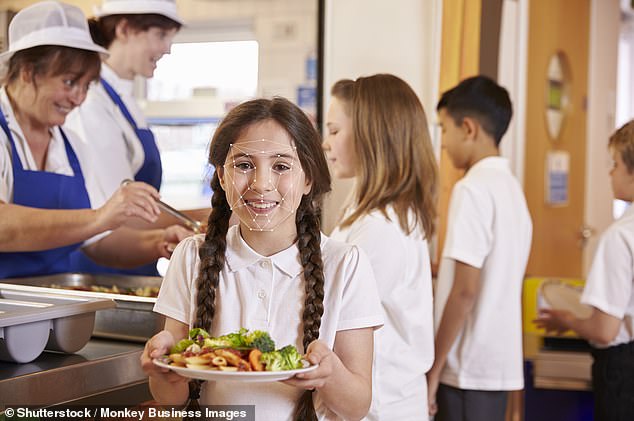 Campaign group Big Brother Watch, which had written to schools in the area urging them to drop the scheme, described the decision in North Ayrshire as ‘fantastic’.

The group’s director Silkie Carlo told MailOnline: ‘We welcome this pause and would urge councils to make it a permanent ban on facial recognition in schools.

How does the facial recognition technology in schools work?

Facial recognition software is being pitched to schools as a way of speeding up lunch payments.

One of the British companies involved in the technology, CRB Cunninghams, claims the system works even when pupils are wearing face masks – and can achieve an average serving time of just five seconds per pupil.

The technology scans the faces of children at lunch tills, and then checks the students against a register of faces stored on school servers.

The students using the system need to select their meal then look at the camera and go, which is considered to be a more hygienic approach than card payments and fingerprints.

The school meal payments are then instantly reflected in the pupil’s cashless accounts.

‘No child should have to go through border style identity checks just to get a school meal. We are supposed to live in a democracy, not a security state.

‘This is highly sensitive, personal data that children should be taught to protect, not to give away on a whim.’

North Ayrshire Council said 97 per cent of children or their parents had given consent for the new system. Parents have to opt in for children to use the technology.

The system had been introduced after the half-term break and scanned the faces of children at lunch tills. It checked students against a register of faces stored on school servers.

Information supplied to parents by the council said: ‘With facial recognition, pupils simply select their meal, look at the camera and go, making for a faster lunch service whilst removing any contact at the point of sale.

‘School meal payments are instantly reflected in the pupil’s cashless accounts in the same way as any other identification method.’

A North Ayrshire Council spokesman said: ‘Having received a number of enquiries in recent days, we have temporarily paused the contactless payment system, which uses facial recognition, in our secondary schools from this afternoon while we consider and respond to the enquiries received.

‘Whilst we are confident the new facial recognition system is operating as planned, we felt it prudent to revert to the previous PIN (Personal identification Number) system while we consider the enquiries received.

‘Pupils using the facial recognition system, who do not already have PINs, will be issued with these. We apologise for any inconvenience this may cause and hope to be in a position to offer a further update in the very near future.’ 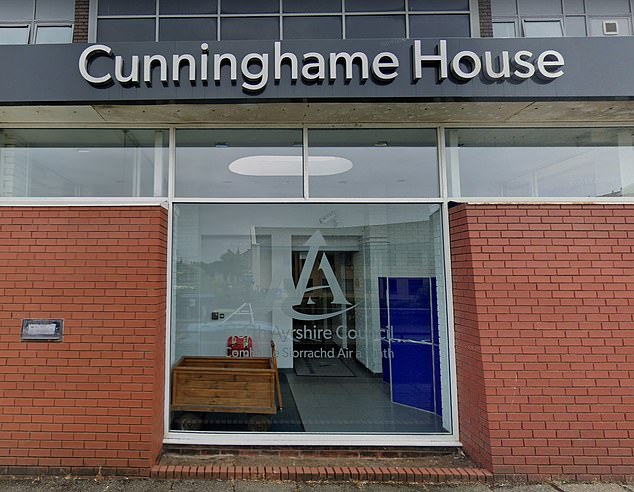 The school in Ashton-under-Lyne which has dropped its rollout of a similar system is Great Academy Ashton – a decision which principal David Waugh said was in response to comments made by the ICO about the potential intrusiveness.

How live facial recognition systems have been dogged by controversy worldwide

Live facial recognition systems are becoming increasingly common across the world but have been dogged by controversy.

A Swedish school used the software to keep a track of students’ attendance but was stopped after it was found to have failed to comply with data protection regulations.

In France, two schools used the technology to control access to the entrance gate – but has since been put on hold after concerns from teachers and parents.

In the US, schools have embraced the tool as a way of providing more robust security following several high-profile school shootings.

But New York state last year banned the software in schools until 2022 to give its education department time to evaluate the privacy implications.

In Britain, the Department for Education has issued guidance to schools on regulation over the use of facial recognition technology, but it is ultimately up to the school.

Pippa King, who runs the Biometrics in Schools blog, said earlier this month that European countries were taking the collection of biometric information from children ‘far more seriously’.

She has also called for more debate in Parliament on the subject.

He told the BBC: ‘The combined fingerprint and facial recognition system was part of an upgrade to the catering cashless system, so that the time it takes to serve students is reduced, thus giving a better dining experience.

‘However, we will not be using the facial recognition aspect.’

Professor Fraser Sampson, biometrics and surveillance camera commissioner for England and Wales, also told the BBC that any public services considering using facial recognition should think carefully before ‘deciding to use a measure as obviously intrusive as facial recognition’.

An ICO spokesman said: ‘Organisations using facial recognition technology (FRT) must comply with data protection law before, during and after its use. In addition, data protection law provides additional protections for children, and organisations need to carefully consider the necessity and proportionality of collecting biometric data before they do so.

‘Organisations should consider using a different approach if the same goal can be achieved in a less intrusive manner.

‘We understand that North Ayrshire Council decided to pause using FRT in schools following our initial enquiries. Our aim is to ensure that children’s data is protected in line with the law and we will continue engaging with the Council on this issue.

‘Anyone who feels that their personal data has been processed in a manner that is unlawful can raise a complaint directly with the ICO.’

The technology has been installed in schools in Britain by a company called CRB Cunninghams which has offices in Birmingham and Edinburgh. MailOnline has contacted the firm for comment.

Earlier this month its managing director David Swanston told the Financial Times: ‘It’s the fastest way of recognising someone at the till – it’s faster than card, it’s faster than fingerprint.

‘In a secondary school you have around about a 25-minute period to serve potentially 1,000 pupils. So we need fast throughput at the point of sale.’