Children are unlikely to fall seriously ill with coronavirus and the risk of them dying from the disease is ‘very low’, another study shows

Children are unlikely to fall seriously ill with coronavirus and the risk of them dying from the disease is ‘very low’, another study has confirmed.

Researchers from Great Ormond Street Hospital in London looked at more than 582 children aged three and above who were diagnosed with Covid-19 across Europe during the height of the crisis in April.

The study found that, out of 363 children who went to hospital for treatment, fewer than one in 10 (8 per cent) needed intensive care.

Four patients (0.68 per cent) died during the research — but academics cautioned the study only included patients who sought help and were tested for Covid-19.

This means milder cases would not have been included.  For this reason they advise against extrapolating the numbers observed in their study to the wider population.

They say if milder cases were taken into consideration, the risk of being hospitalised or dying from Covid-19 for children would be drastically reduced.

It comes after analysis of UK Government by a top Cambridge University statistician revealed children under 14 have a one in 3million chance of dying from Covid.

For comparison, the risk for over-75s is about one in 1,000 and for those over 90 it is one in 50, according to Sir David Spiegelhalter. 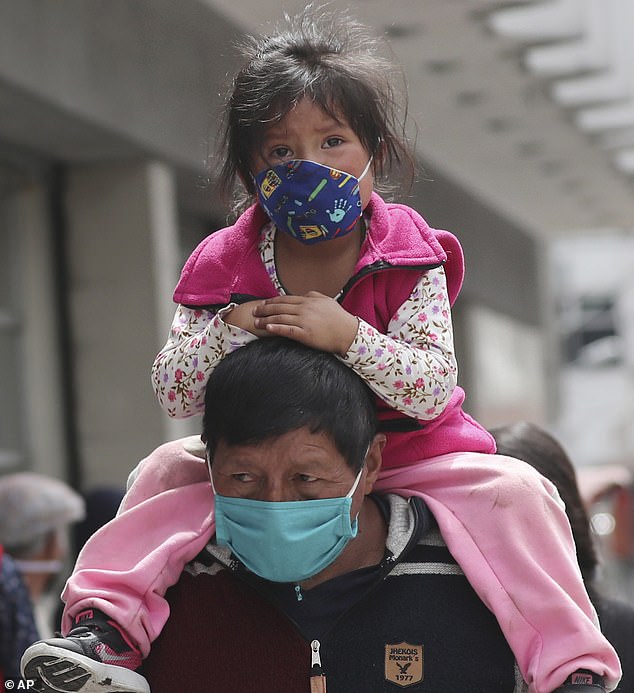 Children are unlikely to fall seriously ill with coronavirus and the risk of them dying from the disease is ‘very low’, another study has confirmed (file)

He added: ‘Our study provides the most comprehensive overview of Covid-19 in children and adolescents to date.

‘We were reassured to observe that the case fatality rate in our cohort was very low and it is likely to be substantially lower still, given that many children with mild disease would not have been brought to medical attention and therefore not included in this study.

‘Overall, the vast majority of children and young people experience only mild disease.

‘Nevertheless, a notable number of children do develop severe disease and require intensive care support, and this should be accounted for when planning and prioritising healthcare resources as the pandemic progresses.’

Almost a third of UK paediatricians reported a delay in children seeking emergency care during the coronavirus lockdown, according to a new survey.

Some 241 doctors said they had dealt with children who turned up for treatment or diagnosis later than would have been expected before the pandemic.

The so-called ‘delayed presentations’ were most common among children with diabetes and sepsis (blood poisoning).

The British Paediatric Surveillance Unit (BPSU) carried out a snapshot survey on April 24 asking 4,075 consultants whether they had seen any delayed presentations in children over the past 14 days.

It was undertaken amid reports of falling attendances at emergency care departments during the Covid-19 lockdown in the UK.

The survey authors said: ‘Parents should continue to access medical care if they are concerned and must not delay getting emergency treatment if their child appears seriously ill.

‘Otherwise, the unintended consequences of the lockdown will do more harm and claim more children’s lives than Covid-19.’

The survey, published online in the Archives of Disease in Childhood, found that delayed presentation was thought to be a contributory factor in the deaths of nine children.

Some 2,433 (60%) paediatricians replied to the BPSU’s survey, of which 241 out of 752 (32%) consultants working in emergency care and paediatric admissions said they had dealt with delayed presentations.

A total of 57 (eight per cent) respondents said they had seen more than three children present for diagnosis or treatment later than would be expected.

The survey authors acknowledged the responses were subjective and based on opinion, adding there was no baseline data for comparison.

They said: ‘Our findings highlight an urgent need to improve public health messaging for parents, which until recently instructed everyone to stay at home.

The number of reports of delayed presentations varied across the UK, ranging from 14% in Wales to 47% in the Midlands and the east of England – where it was the highest.

The 4,075 consultants surveyed represent more than 90% of all those working in the UK and Ireland.

Professor Russell Viner, president of the Royal College of Paediatrics and Child Health, which co-owns Archives of Disease in Childhood with the British Medical Journal, said: ‘We know that parents adhered very strongly to the ‘stay at home advice’ and we need to say clearly that this doesn’t apply if you’re child is very sick.

‘Should we experience a second wave or regional outbreaks, it is vital that we get the message out to parents that we want to see unwell children at the earliest possible stage.’

The study – published in the journal Lancet Child & Adolescent Health – was carried out over a three-and-a-half week period from April 1 to April 24, when most of Europe was battling their crises’ peak.

It involved 82 specialist healthcare institutions across 25 European countries, including the UK, Spain and Austria. Only a quarter of the children had pre-existing medical conditions.

This contrasts with adult studies where the proportion of patients with co-morbidities is typically far higher.

But this likely reflects that children have fewer chronic medical problems than adults overall in the general population, the authors say.

The researchers found that the most common symptom reported was fever (65 per cent) , while around half of the infected children had signs of upper respiratory tract infection (54 per cent). A quarter had evidence of pneumonia.

Gastrointestinal symptoms were reported in around a fifth of the children (22 per cent). Some 92 children, most of whom were tested due to close contact with a known Covid-19 case, had no symptoms at all (16 per cent).

The vast majority of patients did not require oxygen or any other support to help them breathe at any stage (87 per cent).

Only 25 children needed mechanical ventilation (4 per cent), but when they did need it, that support was typically required for a prolonged period, often for a week or more.

A total of 29 children were found to be infected with one or more additional respiratory viruses at the same time as SARS-CoV-2, such as ones that cause a cold or a strain of influenza.

Of these, 24 per cent required intensive care compared with 7 per cent of children who had Covid-19 on its own.

Co-author Dr Begona Santiago-Garcia, one of the lead authors from University Hospital Gregorio Maranón in Madrid, Spain, said: ‘This is the first study of children with Covid-19 to include data from multiple countries and multiple centres.

‘Of note, we found that children in whom additional viruses were detected in the respiratory tract at the same time as SARS-CoV-2 were more likely to be admitted to intensive care.

‘This could have important implications for the upcoming winter season, when cold and flu infections will be more common.’

Four patients died during the study period, two of whom had pre-existing medical conditions. All of the patients who died were older than 10 years of age.

However, the overwhelming majority of patients were alive when the study closed (99 per cent), with only 25 (4 per cent) still experiencing symptoms or needing support for their breathing.

At the time the study was conducted, testing capacity in many European countries was lower than demand, and so many children with Covid-19 and mild symptoms would not have been tested or diagnosed.

Different countries were using different criteria to screen for the SARS-CoV-2 virus.  Some were screening all children admitted to hospital while others were more selective in which patients were offered a test.

This lack of standardisation makes it difficult to generalise the findings to the wider population, the authors say.

But the true case fatality rate in children is likely substantially lower than that observed in this study (0.69 per cent), they concluded.

Co-author Dr Florian Götzinger, from the Wilhelminenspital hospital in Vienna, Austria, added: ‘Although Covid-19 affects children less severely than adults overall, our study shows that there are severe cases in all age groups.

‘Those who have pre-existing health issues and children under one month of age were more likely to be admitted to intensive care.

‘Well-designed, randomised controlled studies on antiviral and immunomodulatory drugs in children are needed to enable evidence-based decisions regarding treatment for children with severe Covid-19.’

UK Government figures show school children under the age of 15 have a ‘tiny’ one-in-3.5million chance of dying from coronavirus and are more likely to be hit by lightning.

Analysis of data from the Office for National Statistics (ONS) shows the death rate for youngsters aged five to 14 in England and Wales is around one in 3.5million.

For under-5s it is one in 2.3million — only 14 people aged under 19 have died with confirmed or suspected Covid-19 since the start of the outbreak.

In comparison, between 30 and 60 people are hit by lightning every year in the UK, according to figures from the Royal Society for the Prevention of Accidents.