Home » World News » Covid cases are rising but they're not spiralling out of control, says expert

Covid cases are rising but they're not spiralling out of control, says expert

CASES of the coronavirus have increased by 20 per cent in the last week, a major app study has revealed.

Despite an increase in cases the experts behind the study have claimed that infections aren't "spiralling out of control". 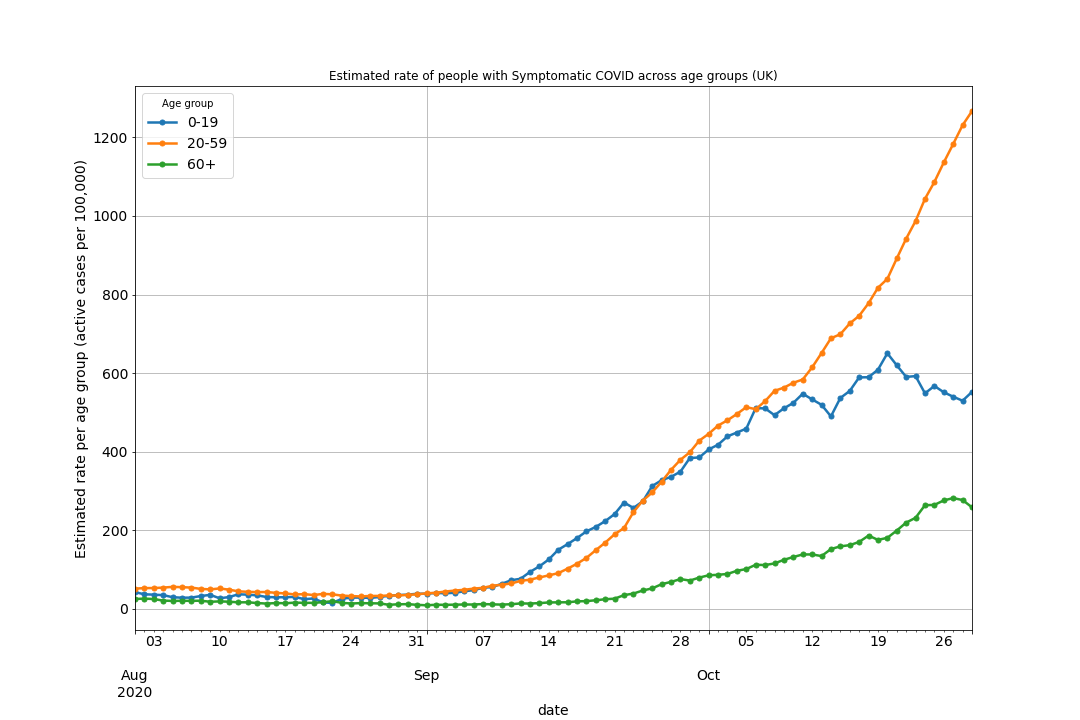 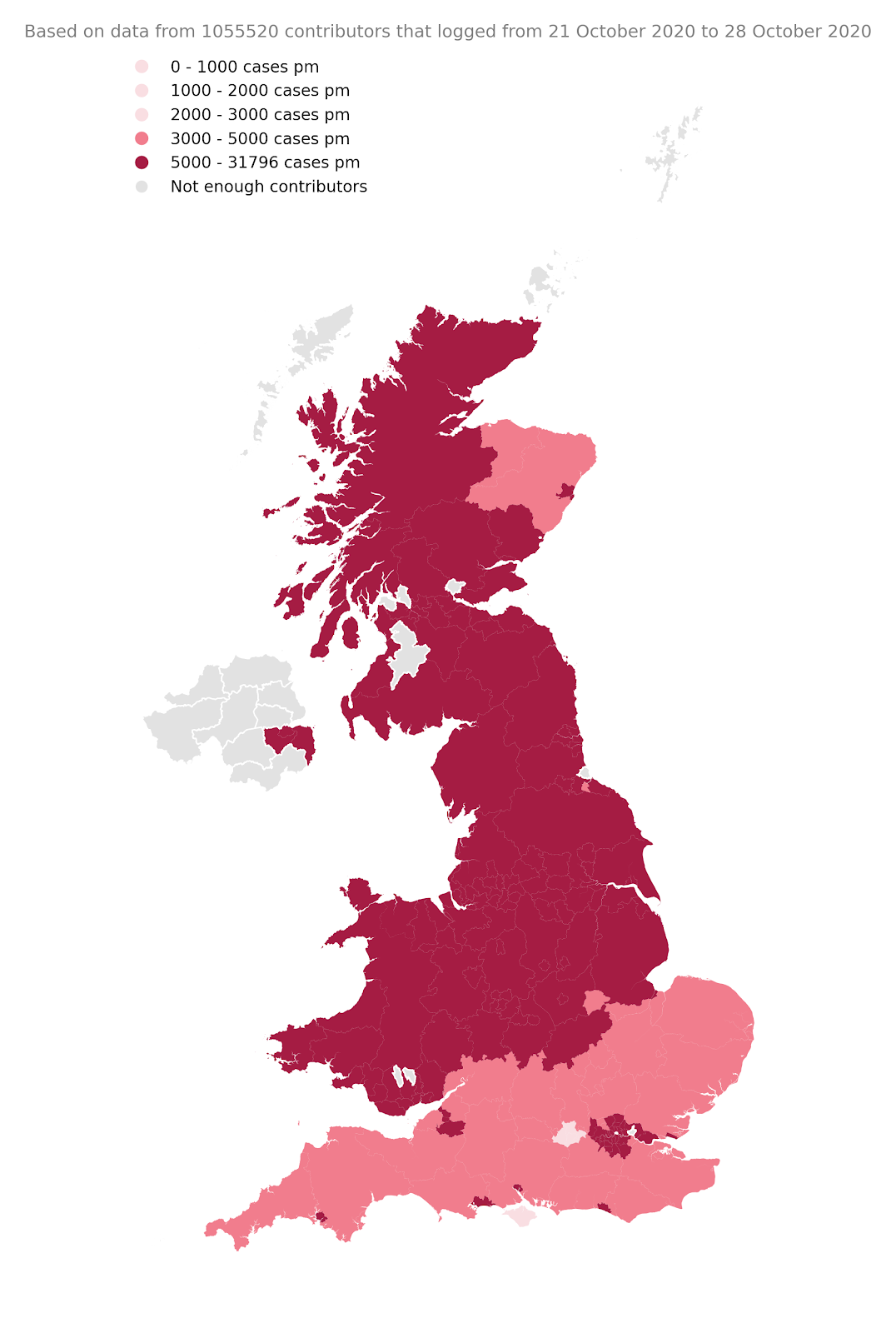 Data from the Covid Symptom Study UK Infection Survey states that daily cases in the UK currently sit at 43,569.

The experts at King's College also estimate that the R rate across the UK is currently at 1.1.

It comes after Imperial College London released data earlier this week which revealed that the R rate in the UK is 1.6.

The experts also stated that cases were closer to 96,000 a day.

The data from the REACT study is separate from the King's College findings, which are compiled through the data submitted by app users.

Data from the REACT study is based on data from more than 85,000 swab tests taken between October 16 and 25 – with some as recent as last Sunday.

The Office for National Statistic (ONS) is also set to release data later today which will reveal the infection level across the country.

Data from the ONS last week revealed that hat England recorded 35,000 new cases of the virus a day from October 10 to 16.

The experts at King's College state that their data is inline with the ONS.

The latest figures from King's College are based on 12,390 swabs taken between October 11 and 25 – as recent as Sunday.

Data from the Department of Health and Social Care today states that 23,065 people were diagnosed with the virus yesterday – a far cry from both the King's College and Imperial Estimates. 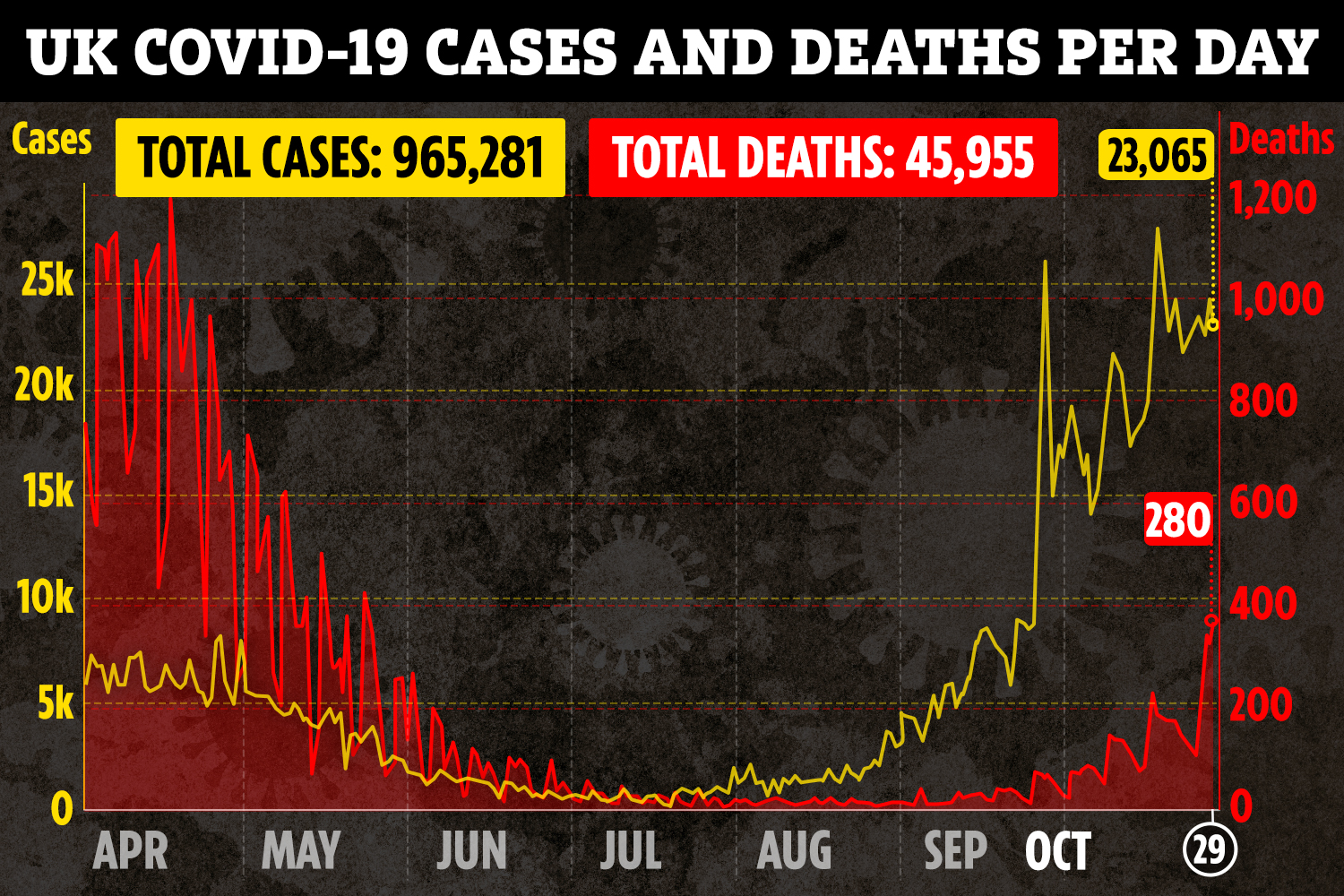 Data from Cambridge University states that cases are at around 55,600 per day.

There is a stark difference between the studies and this is down to the methodology used.

Prof Spector, from King’s College London, said: “While cases are still rising across the UK, we want to reassure people that cases have not spiralled out of control, as has been recently reported from other surveys.

“We are still seeing a steady rise nationally, doubling every four weeks, with the possible exception of Scotland which may be showing signs of a slow down.

“With a million people reporting weekly, we have the largest national survey and our estimates are in line with the ONS survey."

He said cases of the virus are rising but deaths are still average for the season. 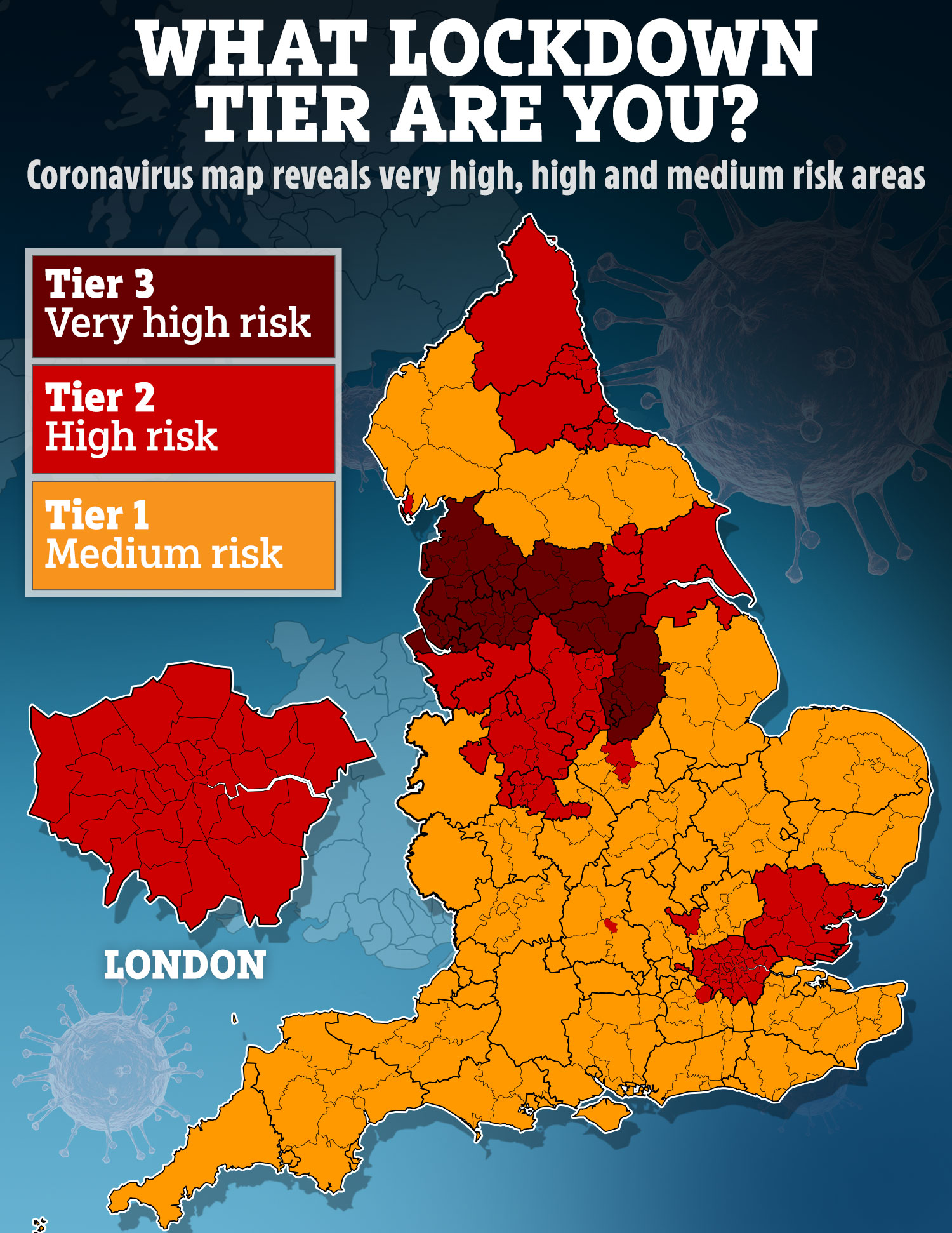 Prof Spector added: “Data on Covid-19 can be confusing for the public and we can't rely simply on confirmed cases or daily deaths, without putting them into context.

“As we become citizen scientists it’s important to look at multiple sources to get a broader view.”

Data from the Covid Tracker app also revealed the next seven places that could be forced into Tier 3 restrictions. 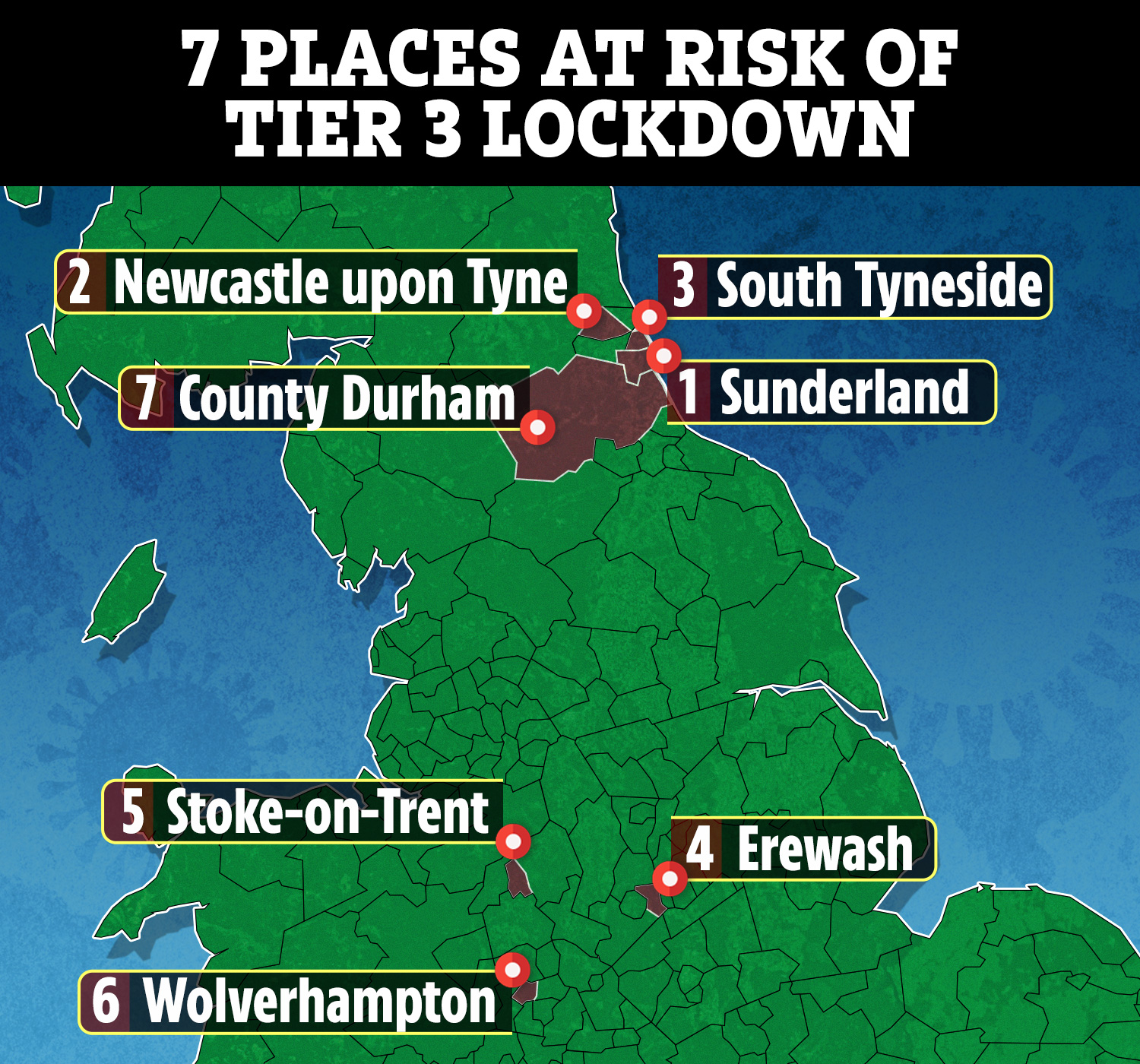 Yesterday it was reported that the number of Brits who have lost their lives to coronavirus is nearing 46,000 – as another 280 people were reported to have died yesterday.

The figures are released by NHS England every day and yesterday revealed that 23,065 more people had tested positive for the deadly bug.

In total, 45,955 people have died with Covid since the UK's outbreak began.

However, there are encouraging signs the number of new infections is slowing.

Yesterday was the first time the daily number of cases has fallen on the amount recorded the week before since September 28.

Despite rising cases, the Government looks set to continue resisting calls for a new national lockdown.

Housing Secretary Robert Jenrick today said Boris Johnson will refuse to bow to pressure from Sage scientists and politicians for a 'circuit-breaker' shutdown.

But the minister admitted the virus "is in a bad place in all parts of the country" as "frustrated" Brits face grinding local measures.