Hidden among the throng, David Beckham waited for more than 13 hours to pay his respects to the Queen yesterday despite being offered the chance to jump the queue by an MP.

Dressed in a suit that hid his famous tattoos, a cap and a Covid mask, the former England captain, 47, joined mourners in the ‘Elizabeth line’ at 2am, going unnoticed by the masses for hours as he shuffled his way from Southwark Park to Westminster Hall.

Along with those around him, who helped keep his secret initially, Beckham said he survived on the very unfootballer-like diet of ‘Pringles, sherbet lemons, sandwiches, coffee and doughnuts’.

‘We all want to be here together. We all want to experience something where we celebrate the amazing life of our Queen and I think something like this today is meant to be shared together,’ he told BBC News.

The former Manchester United and Real Madrid midfielder saw his cover finally blown shortly after midday, with members of the public taking to social media to share the news he was there.

The Daily Mail can reveal Beckham had been invited to view Her Majesty’s coffin by an MP, who is allowed to take up to four guests, to jump the queue. But he declined the offer, saying that his grandfather Joseph West – a staunch royalist and the man the footballer has called his ‘real-life hero’ – would have been disappointed. 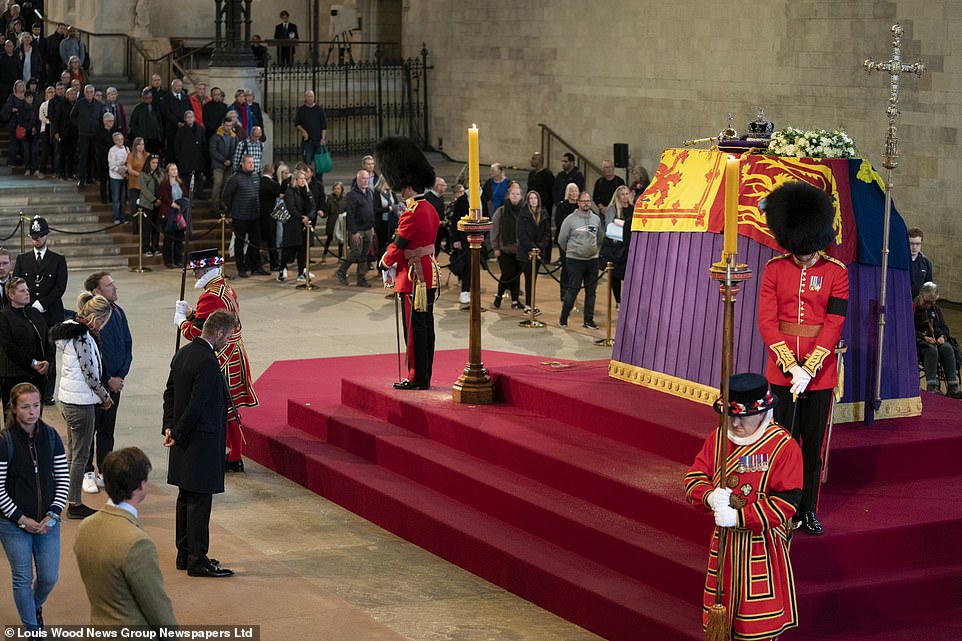 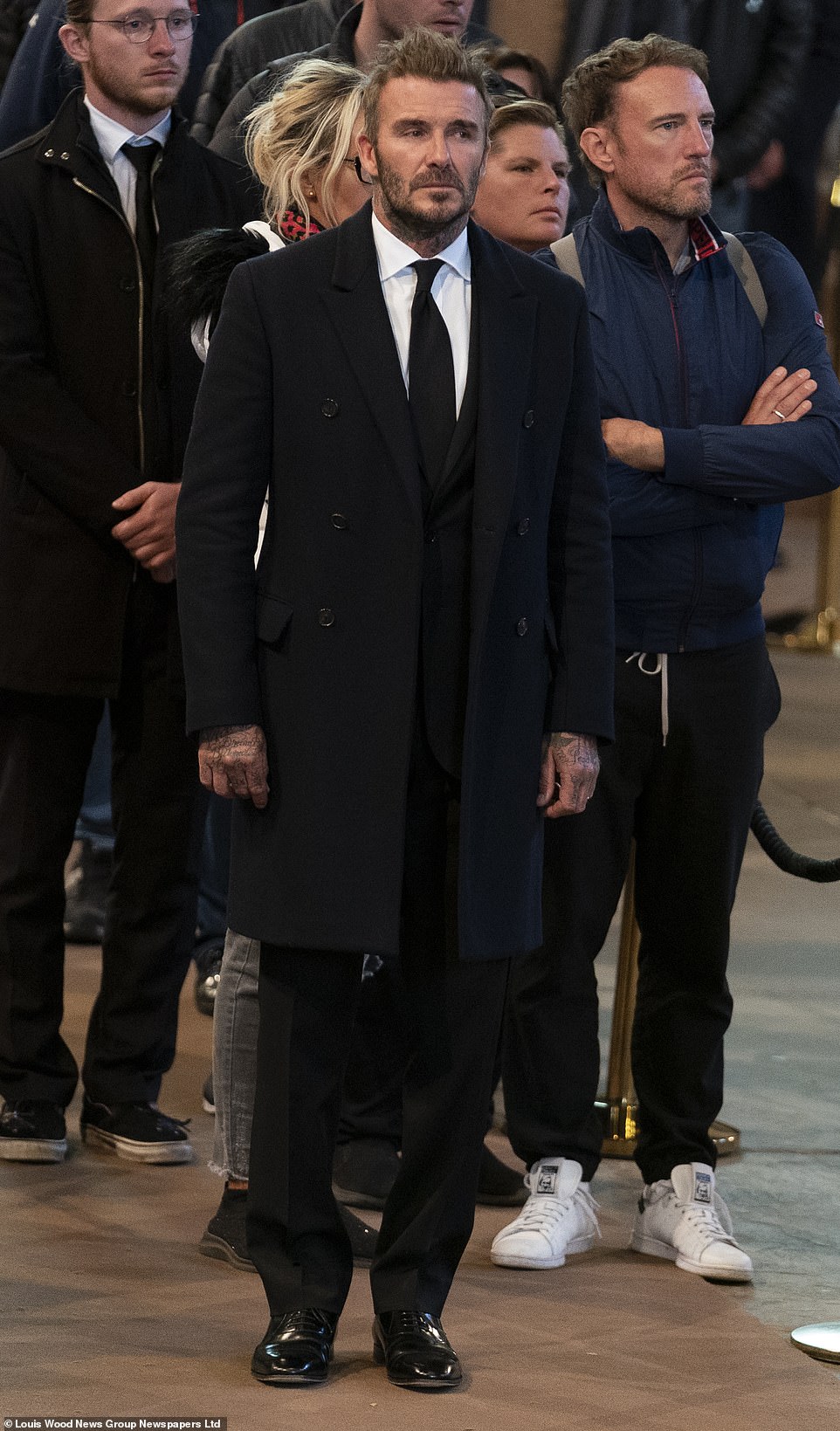 Beckham had been offered a chance to skip the queue by an MP, but he declined the offer, saying that his grandfather Joseph West – a staunch royalist and the man the footballer has called his ‘real-life hero’ – would have been disappointed

A source said: ‘David could have avoided all of the queuing but he wanted to be like everyone else. He said his grandad wouldn’t have [jumped the queue] so neither would he. He had been wondering all week when the best time was to go and finally he went for this morning.

‘David was brought up in an East End family who were real royalists – the kind who would stand to attention when the national anthem came on. He wanted to go to see the Queen like any other member of the public.’

Beckham also opted to dress in a suit because he said that’s what his grandfather, who died in 2009 aged 83, would have done.

After queuing for 13 hours, Beckham looked emotional as he moved past the coffin to pay his respects appearing at one point to wipe a tear from the corner of his eye. As England captain, he met the Queen several times and received his OBE from her in 2003.

‘So this day was always going to be difficult. It’s difficult for the nation, it’s difficult for everyone around the world, because I think everyone is feeling it, and our thoughts are with the family and obviously with everybody here today. Because it’s special to be here, to celebrate and to hear the different stories that people have to say. I thought by coming at 2am, it was going to be a little bit quieter – I was wrong. 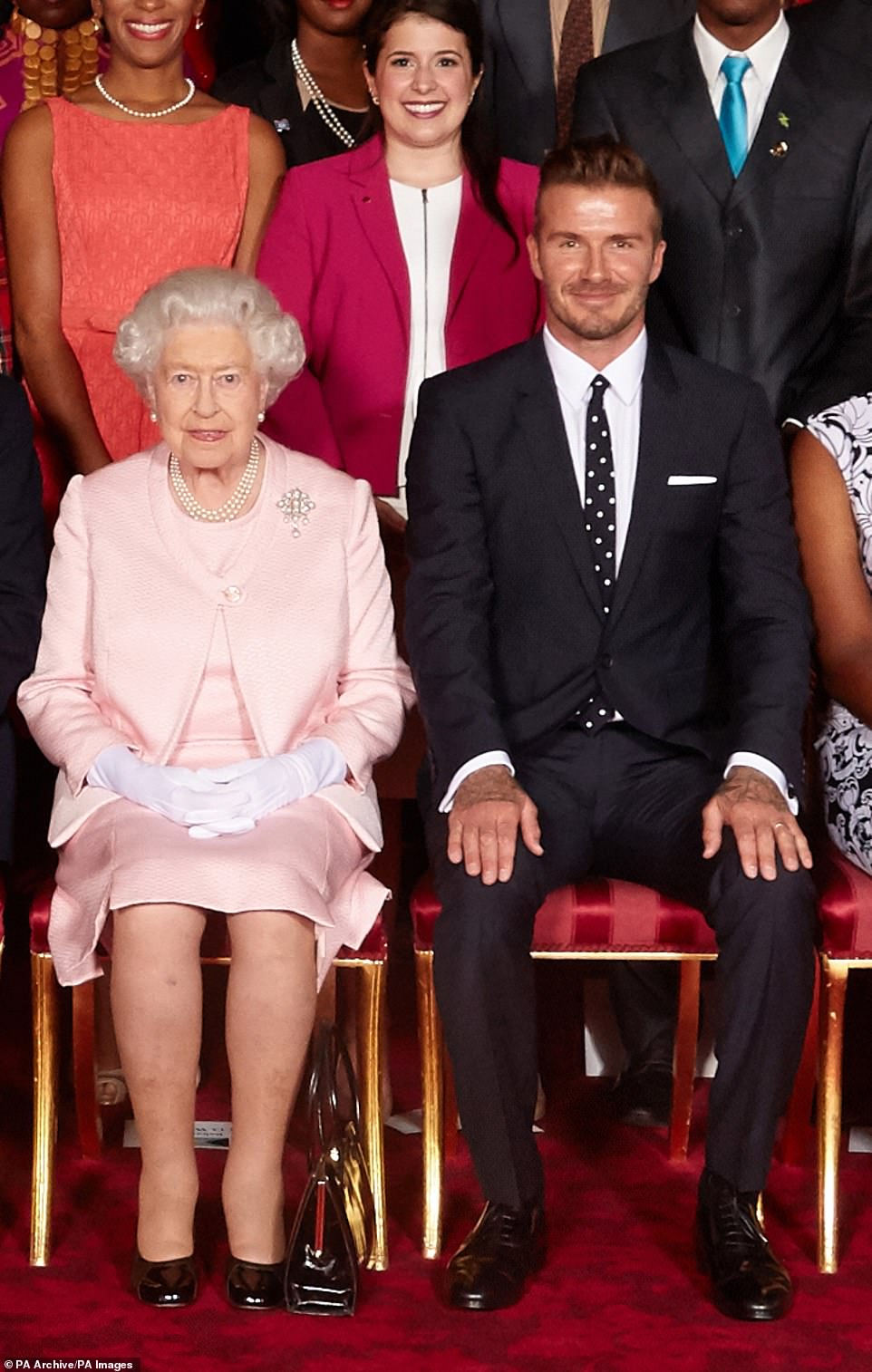 He has regularly told of his fondness for her on his Instagram and when she passed away last week he wrote: ‘I’m truly saddened by the death of Her Majesty, the Queen’ 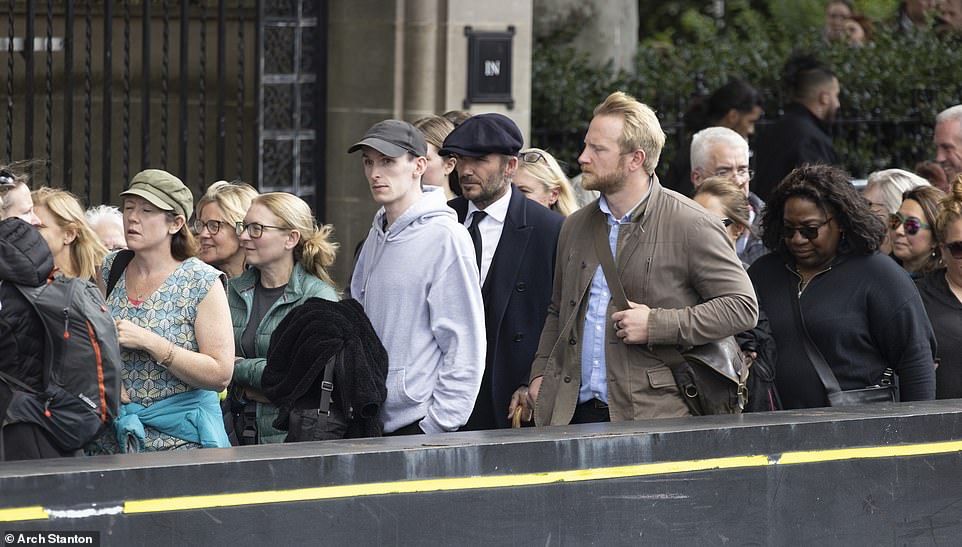 The former Manchester United and Real Madrid midfielder saw his cover finally blown shortly after midday, with members of the public taking to social media to share the news he was there

‘Probably the most special moment for me was when I received my OBE. I took my grandparents with me, who were the ones that really brought me up to be a huge royalist and a fan of the Royal Family, and obviously I had my wife there as well.

‘To step up, to get my honour but then also Her Majesty, to ask questions, to talk, I was so lucky that I was able to have a few moments like that in my life.

‘Because we can all see with the love that has been shown, how special she was and the legacy she leaves behind. It’s a sad day, but it’s a day for us to remember the incredible legacy that she’s left.’

He has regularly told of his fondness for her on his Instagram and when she passed away last week he wrote: ‘I’m truly saddened by the death of Her Majesty, the Queen. What an outpouring of love and respect we saw for the Platinum Jubilee for her life of service.

‘How devastated we all feel today shows what she has meant to people in this country and around the world. How much she inspired us with her leadership. How she comforted us when times were tough.’

When asked how the queuing had been on his knees, he replied: ‘The knees are OK, it’s the back and the feet.’

One woman who had queued next to Beckham told BBC News: ‘Big respect to him. He’s stood with us and he’s paid his respects how he wants to and I think that’s amazing.’

Other celebrities who queued included Good Morning Britain presenter Susanna Reid who waited for more than seven hours with her mother to see the Queen’s coffin lying in state.

The 51-year-old broadcaster wrote on Twitter: ‘I have just experienced a moment in history… at once majestic and peaceful.’