A DELIVEROO customer was furious after a restaurant tried to charge her £130 to have her £20 order delivered.

Alegria Gomes quickly lost her appetite after spotting the Thai takeaway had upped the £3 "small order charge" to six and a half times the price of her meal-for-two. 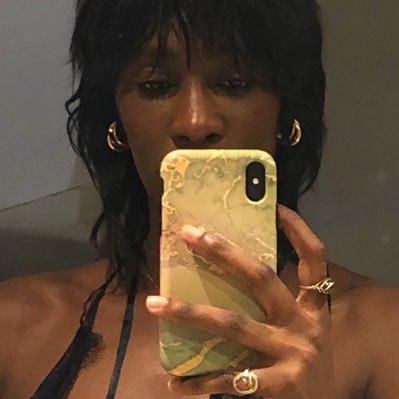 The baffled 29-year-old, from Camden, North London, said she "couldn't be bothered to cook" after an exhausting day of work so scrolled through the delivery giant's app.

She discovered New Thai Kitchen in nearby Barking, East London, and went to place an order totalling £20.

But as she headed to the checkout, she quickly "lost her craving" after noticing they had slapped on an astronomical fee, the Daily Star reports.

Alegria said: "It was almost like an immediate rejection. I thought I'm not spending £160.

"I was looking forward to a takeaway but my craving died as soon as I saw that price.

"If I'm too lazy to cook I don't mind paying the normal £3.99-£4.99 charge, but you expect to spend that much on a slap-up meal in Knightsbridge not sitting at home in your apartment.

"You could spend that much to have a really nice dining experience, not two plastic takeaway bowls. It's very different.

"We had spent ages trying to order something so eventually we just gave up and made an oven pizza instead." 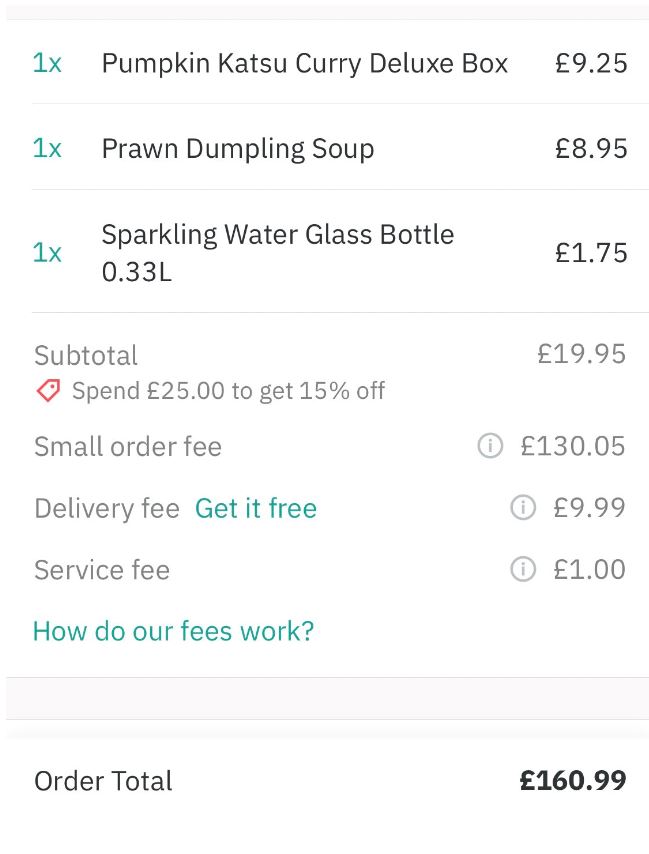 Alegria said she is used to things costing the earth in London, but nothing could have prepared her for this.

"Living in London and Islington is notoriously expensive anyway, so I found it nice to be shocked by the price because you get used to how expensive stuff is. That was funny," she said.

"I've not thought to order anything from there since, definitely not if it's going to cost that much.

"I'm sure they'll have had no orders because of that charge."

Alegria shared a screenshot of the pending order on Twitter, with users mocking it as "nuts".

But the restaurant said the order fee was "justified" because of the 11 mile distance between to Alegria's home – which Google Maps estimates would take between 28 minutes and one hour at that time of night.

Her screenshot shows her order of one Pumpkin Katsu Curry Deluxe Box, one Prawn Dumpling Soup and a bottle of sparkling water totaling £19.95.

However, below the meals, a £9.99 delivery fee and £1 service charge was added – alongside a "small order fee", taking the sum of her midweek treat to an eye-watering £160.99.

Ironically, Alegria wasn't even applicable for the "15% off when you spend over £25" deal, because the pricey charge isn't included in the order subtotal.

Deliveroo said they are advising the takeaway on "how they can improve the customer experience".

A spokesperson for the restaurant said: "As a service provider we have a certain distance that we cover. If the order is beyond that, the minimum order amount has to be so much.

"The customer has the right to cancel the order, and if we see an order like this we call them up and tell them they are being charged a certain amount and ask if they still want to go ahead, then we can cancel it for them.

"If we have a customer in Central London, it wouldn't be feasible to send an order of £5 an hour and a half journey away.

"The fee is justified because if you think about it, anyone can order through Deliveroo from anywhere so you have to have to look at the distance that's covered.

Deliveroo said that New Thai Kitchen is not a full Deliveroo partner, meaning it arranges and pay for its own deliveries, and the minimum order fee of £15 had been reached so the additional charge was due to the delivery distance.

A spokesperson said: "At Deliveroo we want our amazing customers to have the best food delivery experience possible.

"To show our appreciation to our customer, we have sent some free credit to ensure they have a great experience next time.

"We have also spoken to the restaurant partner to advise on how they can improve the customer experience."