Desperate Britons have resorted to pulling their own teeth

Dentists have today warned that patients are being left untreated as urgent treatment centres face a shortage of personal protective equipment (PPE).

Patients with urgent matters such as infections are being forced to take matters into their own hands, as dentists are unable to see them as they do not have the adequate supplies.

The British Dental Association said that 54 per cent of dentists in England have been unable to treat patients at urgent dental care (UDC) hubs, that have been set up across the country after surgeries closed due to the coronavirus pandemic.

One patient, Billy Taylor from Devon, pulled his own tooth out after he could no longer handle the pain. 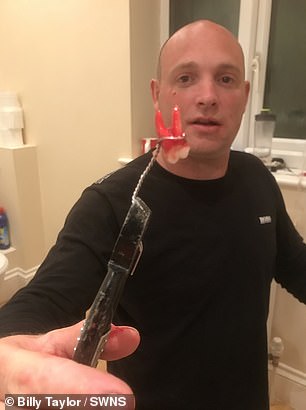 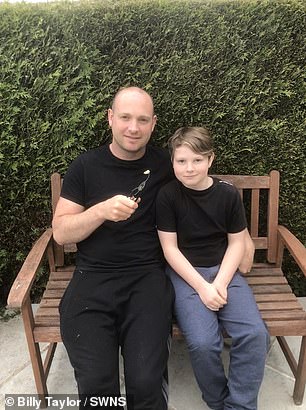 Billy Taylor (left) was forced to pull out his own tooth as he was unable to get an appointment. His son Leo (together right) helped him pull it out 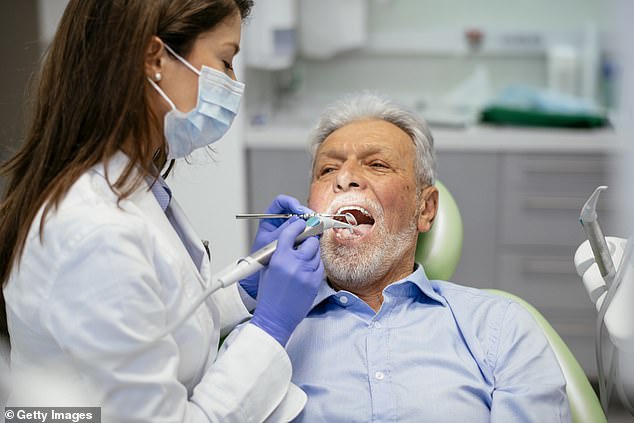 The 33-year-old this morning told BBC’s Radio 4 that the NHS 111 service told him that unless he was struggling to breathe, then there was nothing they could do to help.

‘I phoned my dentist and they said they were closed and would put me on an emergency waiting list but I didn’t know how long that would take so I phoned 111 and they basically said that unless it was stopping me from breathing they couldn’t do anything.

‘This wasn’t the case but the pain was excruciating, so I got an ice pack put it on my face until I couldn’t feel it anymore and the final tug, me and my son just went for it and it came out, it was quite tricky, I thought maybe 20 minutes but it took an hour and a half’.

Billy had to take drastic measure due to the shortage of urgent care centres open, and even some centres that are open are unable to perform some treatments due to a lack of PPE.

Dr Mike Urlish from West Yorkshire said he is working at the Brighouse surgery but is unable to treat anyone.

‘I have all the equipment to treat people but I’m not doing it, all I’m allowed to do is give prescriptions out because we have no PPE.

What should you do if you are experiencing dental issues?

He said that if a patient has swelling that is impacting the airway or the eyes, then you should attend A&E.

‘But if they are not that severe they should phone their local dental practice where the dentist will give then some advice, some antibiotics and if that doesn’t work then that dentist can refer them on to a dental care centre when they are operating.’

‘Some dental infections can be life threatening, we know people are keeping away from hospitals but if you have something that severe you ought to be turning up at A&E.’

‘We haven’t seen anyone for three weeks because a face to face without the appropriate PPE is not advised and not possible.

I’ve advised people to get temporary filling kits, to take pain killers and if necessary we can prescribe anti biotics but that’s all we can do’.

Dr Urlish said he ordered visors from a school technology department but can’t get hold of the right masks.

‘There aren’t enough in the country and I understand that, they need to go to A&Es and hospitals obviously but we can’t do anything without them because using the dental drill creates an aerosol spray which can spread virus particles.

‘It’s not just a case of getting these masks they need to be professionally fitted as well’.

Despite the shortages chief dental officer Sara Hurley, says PPE is on its ways and that a network of more than 200 urgent care centres is up and running.

But Dr Urlish said there are no urgent dental centres in his region and said his surgery has applied to be one but has not heard back.

‘The urgent dental centres still have not been set up and that’s because they haven’t got the PPE, I’m frustrated, I think that is the only word, frustrated I can’t do what I know I should be able to do’.

Vice Chair of Dental Association Eddie Crouch said there is a back log in of patients that are in pain, he said dentists want to help them but added that they need the support to do so.

‘Some PPE is acceptable for doing non-aerosol procedures but that limits what the dentist can do for his patient. Many of our techniques and treatments involve aerosol and wearing the proper respirator type masks and gowns and we know that this is a real problem across the health service.

‘We know dentistry is low priority in comparison to saving lives but we do want to help patients and it’s ridiculous that patients are taking their own teeth out in a country’.

With pressure already mounting on the struggling NHS due to the amount of coronavirus cases and a shortage of PPE, Mr Crouch said further dental problems could put even more of a strain on the NHS.

‘Many of the countries, Northern Ireland, Scotland and Wales have been delivering urgent care centres for much longer than we have in England and the real problem is the organisation within NHS England.

‘The command structure that is there means things are done a lot slower and it means that we have had to wait in England a lot longer for policy and distribution and in other countries it seems to have been much slicker and patients are being seen quicker’.