Home » World News » Do Trump's attacks on the Justice Department cross the line into illegal incitement?

Do Trump's attacks on the Justice Department cross the line into illegal incitement?

Thanks in part to incendiaryrhetoric from Donald Trump, threats toward the FBI, Justice Department and other law enforcement agencies already were on the rise before the search of the former president’s estate and members-only club at Mar-a-Lago a month ago.

Then came Trump’s two-hour accusatory speech on Saturday night Sept. 3 at a campaign rally for Republicans in Pennsylvania.

First, Trump aimed his fire at President Joe Biden in what was expected to be the first of many midterm political events featuring the former president. “He’s an enemy of the state, you want to know the truth,” Trump said of his successor, in response to a fiery Biden speech two days earlier that depicted Trump and his “MAGA Republicans” as a threat to democracy.

Trump also went after the DOJ andFBI—again—for retrieving thousands of pages of documents from his Palm Beach, Florida, estate, including many marked “secret” and “top secret” that authorities say could pose a grave threat to U.S. national security because they were not properly secured.

“The FBI and the Justice Department have become vicious monsters,” Trump said to cheers from the crowd, “controlled by radical-left scoundrels, lawyers and the media who tell them what to do … and when to do it.” 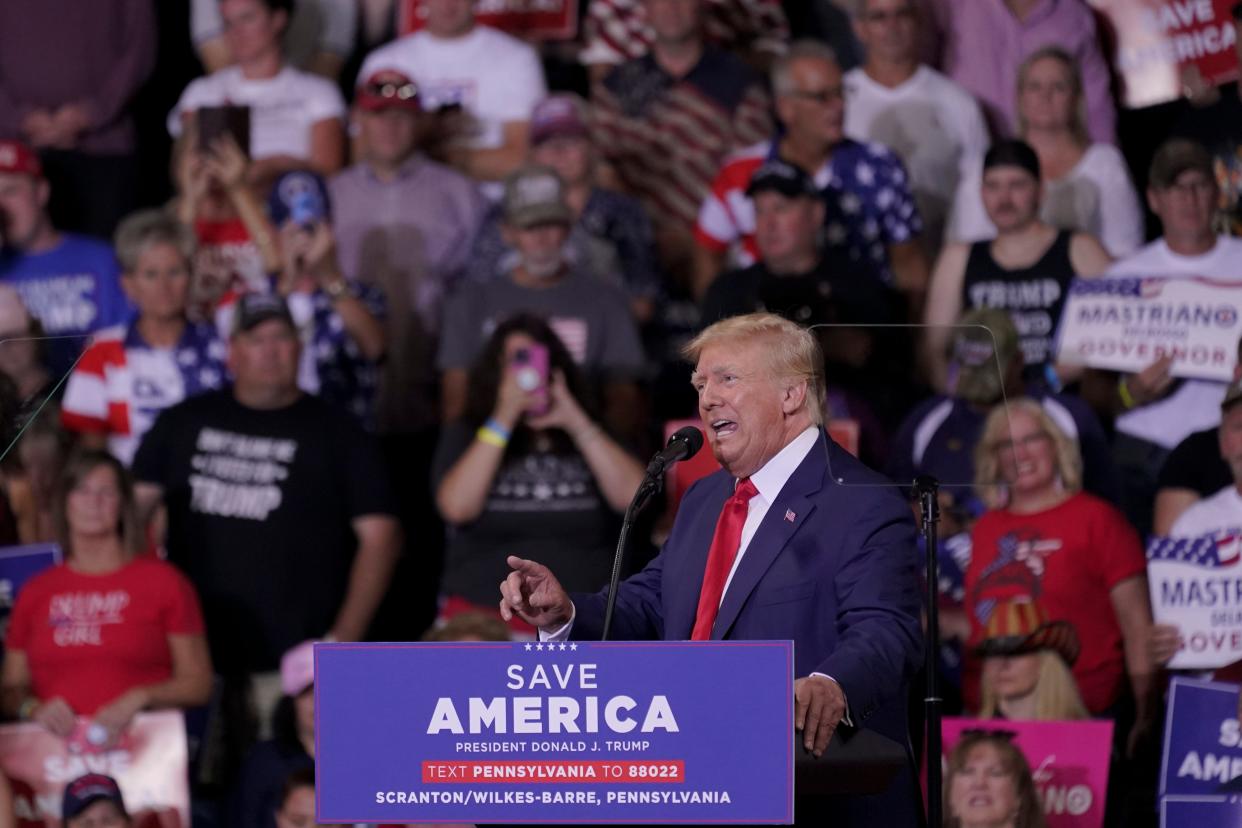 More: The FBI found dozens of empty classified folders at Trump’s Mar-a-Lago. What was in them?

In recent weeks, he has also attacked Biden, federal law enforcement agencies, the media and a host of other perceived enemies via his Truth Social platform and other venues.

So far, legal experts and lawmakers say Trump has not crossed the line from merely inflammatory rhetoric to using words that clearly meet the legal definition of incitement to violence in his comments made after the Aug. 8 Mar-a-Lago search.

Trump’s comments that have come closest to the legal definition of incitement, they say, were when he told his supporters on Jan. 6, 2021 to march on the Capitol and “fight like hell” as lawmakers certified the election results that made Biden the winner of the 2020 presidential election. The ensuing mob riot temporarily halted the process and resulted in serious damage to America’s seat of democracy that is now the basis of scores of investigations.

“Donald Trump’s comments at the Saturday rally, as problematic as they might be, pale in comparison to what he said on Jan. 6, 2021, at the Ellipse in Washington,” said former federal prosecutor Neama Rahmani.

But, Rahmani added, “It’s more of the same ugly political rhetoric from Trump, and he’s emboldened because he hasn’t faced any consequences.”

And that’s what worries some lawmakers and legal experts, including numerous former federal prosecutors interviewed by USA TODAY.

They say the caustic anti-government nature of Trump’s comments has put the Department of Justice in an increasingly tough spot as his rhetoric has intensified following the Mar-a-Lago search and the ensuing legal battle over classified documents that were in his possession.

What happens, they ask, if Trump continues to ratchet up rhetoric to a point where the Justice Department and Attorney General Merrick Garland—and the FBI—feel like they need to intervene before violence occurs?

“I wouldn’t want to be Merrick Garland for all the tea in China,” said Paul Rosenzweig, a former federal prosecutor and Department of Homeland Security official who also worked on the Whitewater investigation of President Bill Clinton in the 1990s.

“Any decision he makes will be second-guessed especially if, retrospectively, it doesn’t work out,” said Rosenzweig, the founder of Redbranch Law & Consulting, PLLC.

More: Trump’s relentless attacks on Mar-a-Lago search lack context. What he said vs. what we know.

The incitement issue, according to Rosenzweig,is no different than criminal charges that authorities might ultimately consider filing against Trump for Jan. 6-related activities, his storing of classified documents at Mar-a-Lago and other alleged wrongdoings that are currently under active investigation.

“It’s another variation of the quandary that the Justice Department has faced all along in dealing with a former president who has repeatedly ignored the law but who is the subject of adulation by a cultish constituency” that at times has turned violent, Rosenzweig said. “They have to balance prosecution not just against whether they can win or lose, which is how we normally do it, but really earth-shattering questions like the importance of the rule of law.”

“If he doesn’t indict (Trump), he opens himself up to charges that he’s giving up the rule of law,” Rosenzweig said of Biden’s appointed top law enforcer. “If he does and he misses, he’ll be called a fool or worse. And if he does indict, he could face causing a civil war. That isn’t his fault, it’s Trump’s, but that’s the reality.”

More: Threats toward FBI, law enforcement were already on the rise. Then came Mar-a-Lago 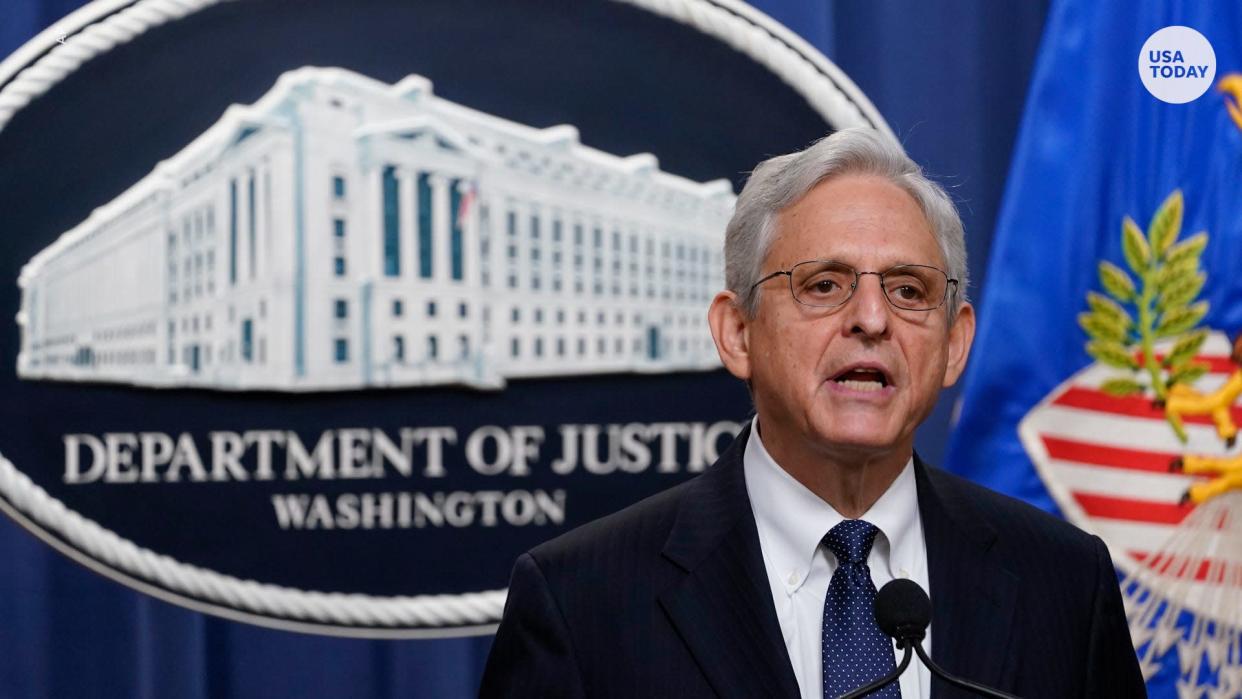 Legally, there are many different statutes that could apply, all of which involve the act of urging others to commit a crime. And technically, Trump as a former president has no special protections not afforded to any other U.S. citizen under the law.

Trump’s remarks on Sept. 3 aren’t the first time he has come under scrutiny for allegedly inciting violence.

The Houseimpeached Trump on a charge that he incited an insurrection on Jan. 6, 2021 after claiming falsely that the presidential election had been fraudulently stolen from him.

The Senate ultimately acquitted Trump. But a congressional impeachment process is entirely different than criminal charges that would be brought before a judge and jury.

Inciting an insurrection, riot or violence is a federal crime under several statutes, all of whichrequire intentionally riling up people to the point of action. For instance, the lawstates anyone using interstate travel to organize, promote, encourage, participate in, or carry out a riot; or commit any act of violence in furtherance of a riot; or aid or abet any person doing the above, is guilty of a federal crime.Laws involving incitement also require at least some act of intention on the part of the accused.

One of several complicating factors is a 1969 Supreme Court ruling that considers even extremely inflammatory speech as protected free speech under the First Amendment unless it is aimed at causing “imminent disorder” or lawless behavior. 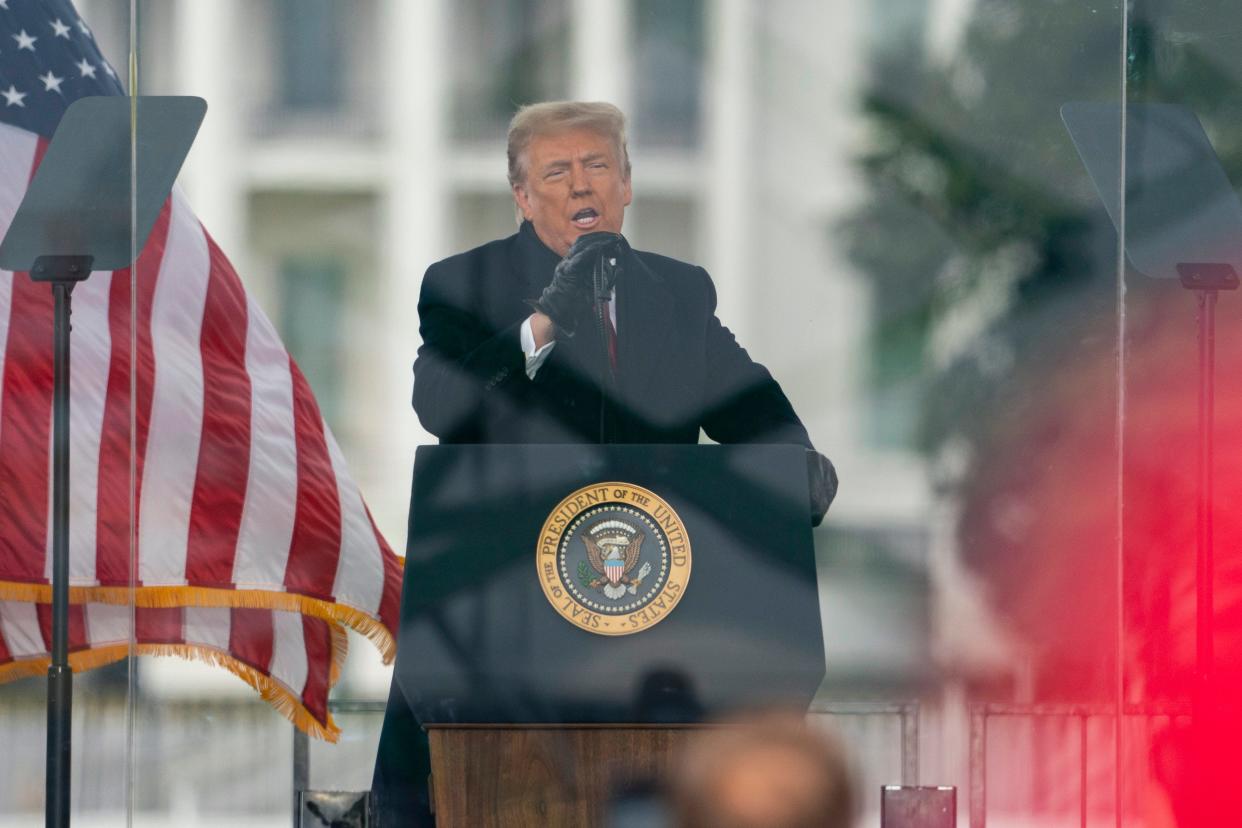 Trump’s ‘enemies of the people’

Trump delivered his campaign speech at a rally held for one GOP candidate for Senate in Pennsylvania, Mehmet Oz, and another, Doug Mastriano, who is running for governor. But most of his comments focused on his own legal troubles and grievances against a litany of enemies he says are unfairly uniting against him, including law enforcement agencies, Democrats and the mainstream media.

“We are a nation that has weaponized its law enforcement against the opposing political party like never before,” Trump said. “We’ve got a Federal Bureau of Investigation that won’t allow bad election-changing facts to be presented to the public and a Department of Justice that refuses to investigate egregious acts of voting irregularities and fraud.”

“Trump is attacking law enforcement and yet again using language he knows will provoke violence,” tweeted one of the committee’s two Republicans and its vice chair , Rep. Liz Cheney of Wyoming.

Cheney, recently ousted from her congressional seat by a Trump-backedcandidate, added that only her fellow Republicans can stop Trump from deliberately stirring up violence. “If my fellow Republicans fail to step up to stop this, they will share the blame for all that follows.”

Rep. Zoe Lofgren, a California Democrat on the Jan. 6 committee, issued a similar warning in a CNN interview the day after Trump’s remarks.

Asked by host Jim Acosta if Trump’s rhetoric has constituted incitement dating back to his pre-Jan. 6 claims of a rigged election and voter fraud, Lofgren responded: “Well, potentially yes.”

“In the lead-up to January 6th, there were extravagant claims made meant to inflame public opinion, and that is what is happening here,” she said. “I think it’s meant to turn people against law enforcement officers. And we’ve seen that sometimes that rhetoric reaches people who are prepared to act on it.”

No consensus on Trump rhetoric

“He uses heightened rhetoric to talk about inflammatory issues on a large scale and that may in fact motivate people to commit acts of violence, but it’s a stretch to say anything he said would constitute incitement,” said Amy Collins, a former Justice Department official and criminal defense attorney at law firm Price Benowitz LLP.

Ron Filipkowski, a state and federal prosecutor and current criminal defense lawyer, said there are multiple problems with trying to prove an incitement case against Trump.

Also, he said: “Words alone isn’t really going to give you a provable case. You pretty much have to have a direct assertion; ‘I want you to go there and do this now,’ then an immediate reaction by the intended recipient.”

So when Trump gives a speech and nothing immediately happens, there is no incitement, Filipkowski said.

Noah Bookbinder, another former federal prosecutor and president of Citizens for Responsibility and Ethics in Washington, said Trump’s Pennsylvania speech “may not rise” to the level of incitement, but some of his earlier comments certainly have, including “his very specific exhortations and encouragement to the crowd that attacked the Capitol on January 6, 2021.”

A history of borderline statements

Even if most legal experts say Trump’s comments at his Saturday rally did not amount to incitement, some feared how his speech might affect supporters.

Juliette Kayyem, an assistant secretary of Homeland Security in the Obama administration and former senior Justice Department official,told USA TODAY that Trump has been “radicalizing and energizing his followers so that violence is more likely but the exact nature of it is unknown.”

Those kind of remarks, she said, usually didn’t amount to incitement because they were too generalized.

“That changed in December 2020 after he lost the election,” said Kayyem, faculty chair of the Homeland Security Project at Harvard’s Kennedy School of Government. “And now I think it’s safe to say that you don’t need to parse his words to determine what he wants and what his listeners are hearing.”

“He says who to target. In some cases he says when and where,” Kayyem said. “And he utilizes language that is understood by his listeners as a call to violence.” 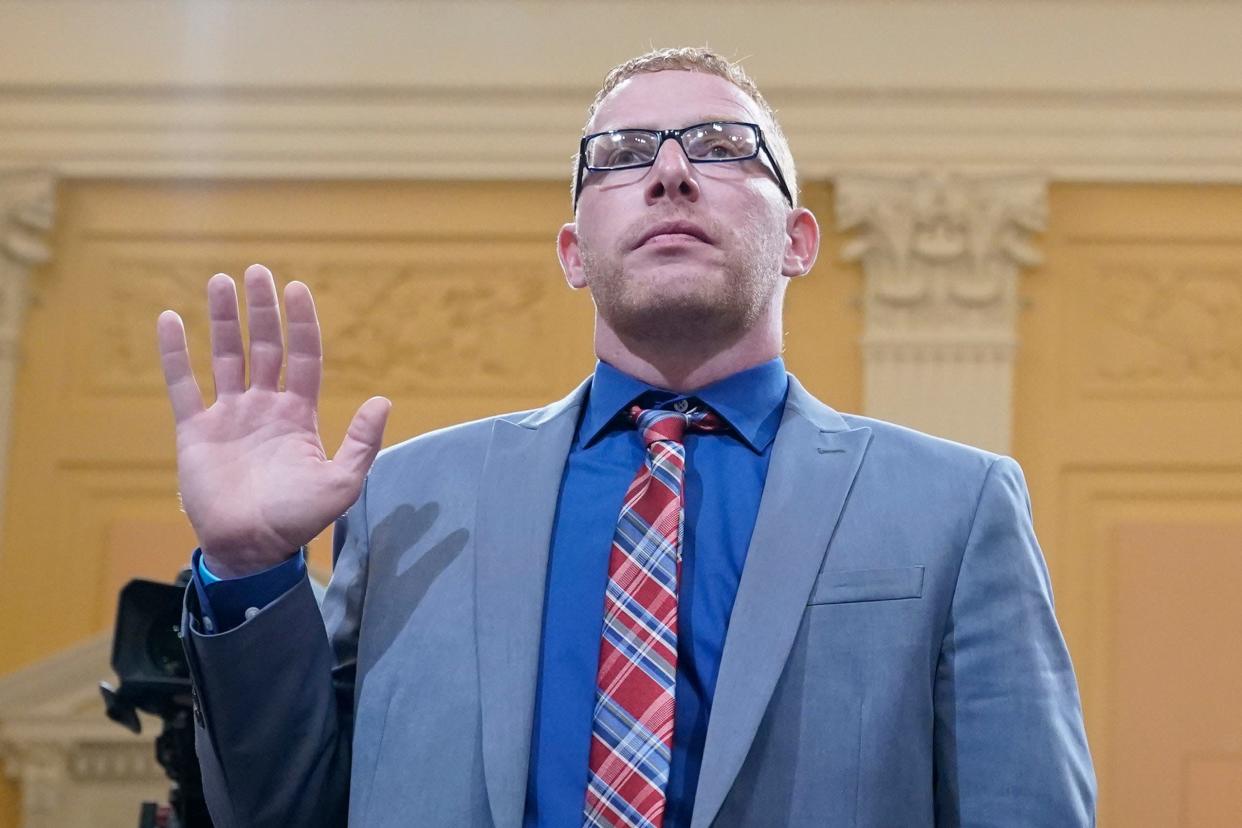 One Jan. 6 rioter, Stephen Ayres, testified how he believed Trump’s repeated false assertions about the 2020 election being stolen was what prompted him to travel to Washington and join the mob that stormed the Capitol.

Trump launched some especially inflammatory attacks against the FBI and Justice Department after their Mar-a-Lago search last month.

Soon after, a man armed with an AR-15 rifle and a nail gun attacked an Ohio FBI office after posting “Kill F.B.I on sight” on Trump’s Truth Social site. He was shot and killed in a standoff with police.

And aweek after FBI agents carted off boxes of documents, including at least some of the top-secret material they were looking for, Trump warned that his followers were so enraged that “terrible things are going to happen” if the Justice Department kept the heat on him.

Bookbinder told USA TODAY that given Trump’s past history, the Justice Department and FBI need to be prepared to respond.

“There is every reason to believe he could do it again, or go even further, in the future,” Bookbinder said, adding that the Justice Department needs to. “Accountability is key to preserving safety and democracy. Waiting for his speech to rise to the level of prosecutable incitement in the future is not an option.”