New York: The ashes of Dorothy Parker, the beloved writer and humorist, have been moved yet again, this time to a final resting spot in New York.

The relocation of Parker's ashes is the latest chapter in the circuitous journey of the writer's remains: from a crematory in a New York suburb for six years, to a filing cabinet on Wall Street for 15 years, to a yard behind the NAACP headquarters in Baltimore. At last, Parker will have a final resting place at Woodlawn Cemetery in the Bronx. 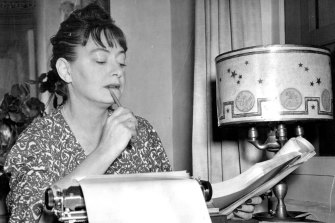 The development, which was reported by The New Yorker on Friday, was the culmination of 14 years of discussion, according to Kevin Fitzpatrick, head of the Dorothy Parker Society, a fan group.

"She's back in her hometown," Fitzpatrick, a professional tour guide and author, said in an interview Saturday.

Parker, who was known for her writing published in The New Yorker, Vanity Fair and Vogue, as well as for her wry humor, left the bulk of her estate and royalties from her writings to the Reverend Martin Luther King jnr and, in the event of his death, to the NAACP.

She had not, however, left instructions about what should become of her remains by the time she died in 1967 at 73 in her suite at the Volney Hotel on the Upper East Side of Manhattan, and no one knew what to do with her ashes. For years, they sat at a Westchester County crematory until they were shipped to the Wall Street office of Paul O'Dwyer, a lawyer for playwright Lillian Hellman, who was the executor of Parker's estate. The ashes were left in an office filing cabinet there.

When Benjamin Hooks, then the executive director of the NAACP, learned that Parker's ashes did not have a proper resting place, he suggested they be brought to the group's headquarters, in Baltimore. He and two leaders of Baltimore's Jewish community announced the plan to build a memorial garden behind the NAACP headquarters, with the idea that it would be her final resting place.

But the NAACP's announcement that it planned to move its headquarters to Washington in the coming years ignited a debate over where Parker's remains should go.

The Woodlawn Cemetery, in a plot with her parents and grandparents, was "really the only place for Dorothy Parker to go," Fitzpatrick said.

Aba Blankson, a spokeswoman for the NAACP, did not respond to a request for comment on Saturday.

Fitzpatrick transported Parker's ashes on an Amtrak train from Baltimore to New York, and then in an Uber from Penn Station to the Upper West Side. During the train journey, he said, he made a cocktail with Dorothy Parker gin.

"I just wanted to celebrate getting her on her journey home," he said. "To actually be holding her remains was very surreal. You're actually so close to someone that you have spent so much time writing about, thinking about, talking about."

The ceremony at Woodlawn Cemetery in the Bronx took place on August 22, Parker's birthday, when she would have turned 127 years old.

Susan Cotton, Parker's 73-year-old grandniece, and other family members could not attend the burial ceremony because of the coronavirus pandemic. But Cotton said she had drunk a martini in her great-aunt's honor while the ceremony was happening.

Cotton said she and her siblings were thrilled that "Aunt Dot" was back in New York.

"That's where she should've been all along," said Cotton, who never met Parker.

Joan Grossman, 69, another of Parker's grandnieces, said, "It was time for her to come back home."

Fitzpatrick, 54, said that next year there would be a big "welcome home" party to celebrate both Parker's life and New York City, the place she loved.

At the burial ceremony, Fitzpatrick read passages from Parker's essay "My Hometown," an ode to New York, in which she wrote that she had been cheated out of the distinction of being a native New Yorker because she was born while her family was spending the summer in New Jersey.

New York, Parker wrote, "is always a little more than you had hoped for. Each day, there, is so definitely a new day."