Education Secretary Gavin Williamson nominated for MP OF THE YEAR

Gavin Williamson is in the running to be named MP of the Year despite widespread demands for him to quit over this year’s exams fiasco.

The Education Secretary has been nominated in the People’s Choice category of the awards run by non-partisan organisation the Patchwork Foundation.

He has been nomination by the public in a competition for MPs ‘who  have gone above and beyond in their role over the past year’, sparking ridicule.

Mr Williamson has so far seen off attempts to force him from office after English exam results affected by coronavirus were first marked down and then marked up following an outcry.

While the award nominations closed in July, before the shambles that came to a head last week, by that point he had already presided over a failure to get all schoolchildren back into classrooms for at least a few weeks before the summer break.

He now faces a battle to get them all back into lessons in September, despite a massive push from politicians and medical experts.

Social media users brutally mocked Mr Williamson after the announcement, with one saying: ‘In other news, King Herod has been nominated for the post of Children’s Commissioner, (Donald) Trump as the next Wykeham Professor of Logic at Oxford University and Vlad the Impaler as National Medical Director of NHS England.’

Another senior education minister, Gillian Keegan, has also been nominated. 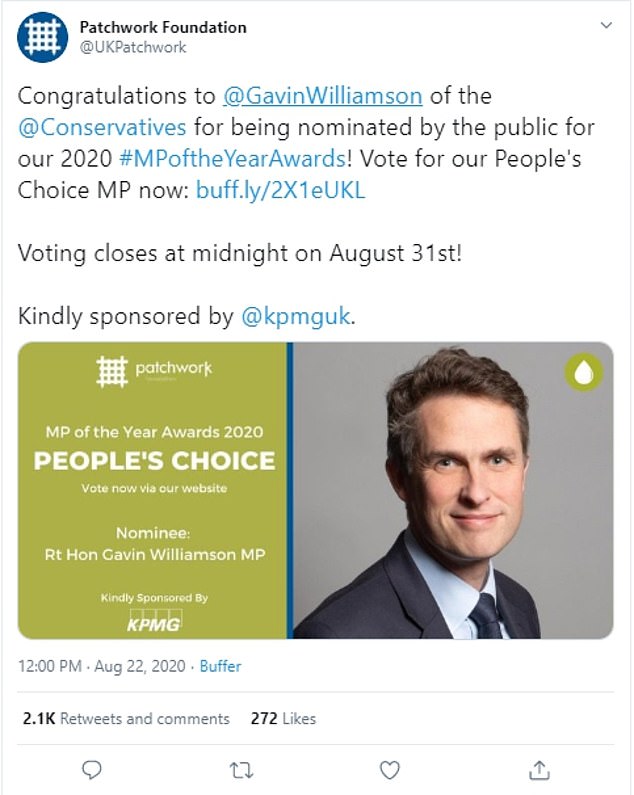 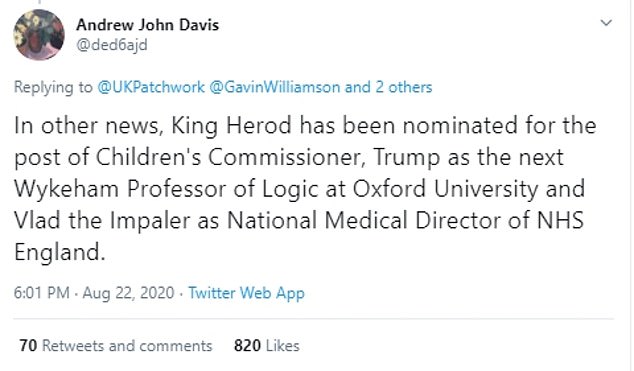 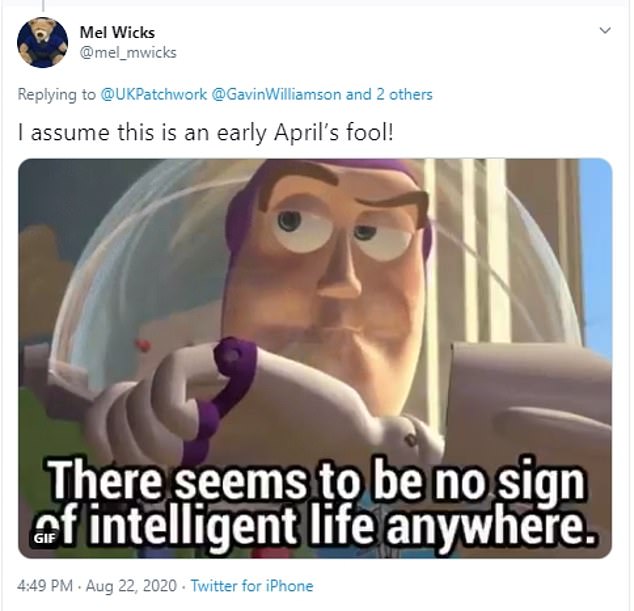 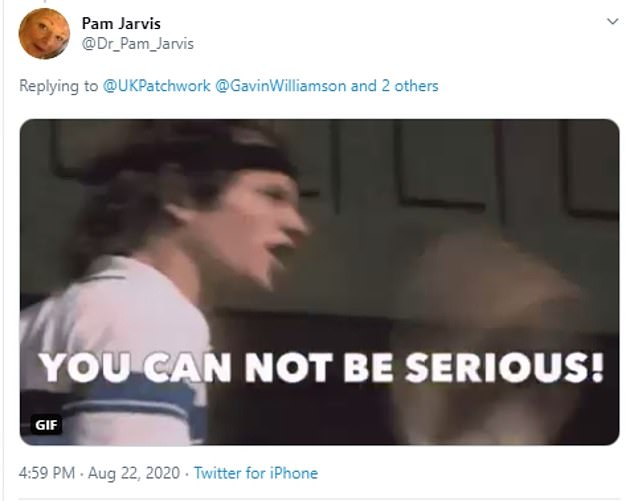 Former Labour leader Jeremy Corbyn is also among those nominated for MP of the Year.

He was voted on to the list despite overseeing his party’s utter humiliation at December’s general election.

The party suffered its worst reverse since the 1930s, handing Boris Johnson an 80-seat majority and prompting Mr Corbyn to stand down.

Mr Corbyn is nominated in the same People’s Choice category as Mr Williamson.

The Apprenticeships and Skills Minister was under fire at the weekend for enjoying a holiday in the French Alps while teenagers in Britain went ‘through hell’ over their exam grades.

As students worried over their futures, Gillian Keegan enjoyed hiking trips, mountain biking and dips in a mountain lake – and boasted about them on Instagram.

The Patchwork Foundation works to get young people from ‘disadvantaged and minority communities’ more involved in politics and civil society.

Regarding the voting it said: ‘The public nominates any MPs they think have gone above and beyond in their role over the past year, especially in championing underrepresented voices. This year nominations opened April 22nd and closed July 19th.

‘Winners are then chosen in two ways. The first are the Judges’ Awards, chosen by an independent panel of judges who blind judge the nominees by considering their work and accolades.

‘The second are the People’s Choice Awards, which is where YOU come in! The public votes for their #MPoftheYear. Voting will close at midnight on the 31st of August, so don’t miss your chance.’

It came as Boris Johnson was forced to take charge of the Government’s push to get children back to school in September.

Mr Johnson, who has returned to London following his Scottish holiday, pleaded with parents to send their children back to the classroom.

He today issued a plea to parents to send their children back to the classroom when schools reopen in England at the start of September.

The Prime Minister said in a video posted on his Twitter account that he knew some parents were ‘still a bit worried’ about sending children back to school but he insisted it is ‘vital’ for pupil’s physical and mental health.

The Government remains under pressure over its handling of the return of schools with Tory MPs today complaining ministers have left it ‘very late’ to persuade parents it is safe.

Many pupils in England have not been to class since March, when schools were closed except to look after vulnerable children and those of key workers.

Schools in Scotland reopened earlier this month, while those in Northern Ireland will welcome pupils again on Monday. English and Welsh schools will follow suit in September.

The Government’s handling of the schools return, and last week’s debacle over A-level and GCSE results, has sparked Tory MP fury.

Sir Iain Duncan Smith, the former Conservative leader, told The Telegraph schools and parents needed a ‘clear message’ that it is ‘completely safe to return’.

‘They have left it very late and the debacle of exam results means parents don’t trust the Government any more,’ he said.