Eleven killed in bombing in Afghanistan 72 hours before ceasefire

At least 11 people have been killed and dozens wounded after a bomb blew up a bus in Afghanistan in the latest deadly blast to hit the country.

The bombing comes just 72 hours before the Taliban are set to hold a three-day ceasefire for the religious holiday of Eid al-Fitr on Wednesday marking the end of the Muslim holy month of Ramadan.

The roadside bomb exploded on Sunday night in the southern province of Zabul, the provincial governor’s spokesman Gul Islan Sial said, adding that women and children were among the 28 people wounded in the attack. 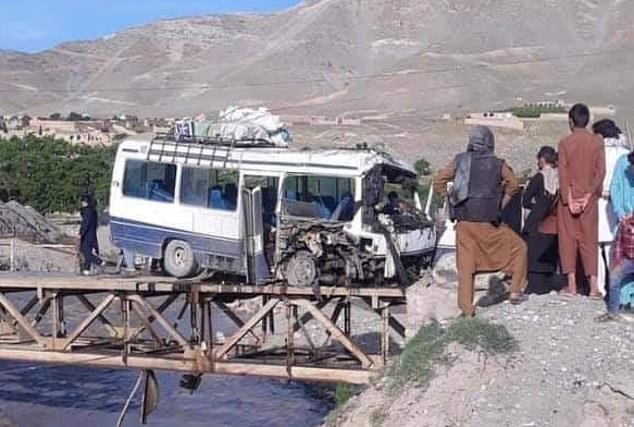 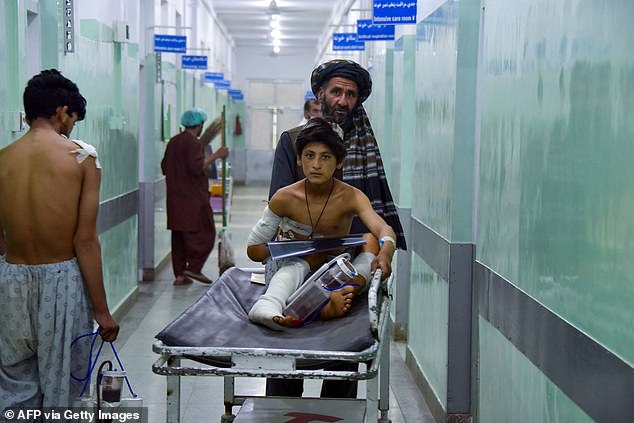 At least 28 people have been injured in the attack on the bus. Pictured: An injured boy is pushed on a stretcher along a hospital corridor in Kandahar on Monday as he receives medical treatment after being hurt by the roadside bombing

It comes as the Taliban said on Monday they would observe a three-day ceasefire this week.

The ceasefire will begin on either Wednesday or Thursday. The Muslim calendar follows lunar cycles and the Eid holiday depends on the sighting of the new moon.

The ceasefire declaration came two days after bombings outside a school in the capital of Kabul killed 85 people, most of them schoolgirls, on Saturday according to CNN.

Danish Hedayat, head of media for the second Vice President of Afghanistan told the news outlet the death toll had risen as of Monday and another 147 people were wounded in the attack.

‘Mujahideen of the Islamic Emirate are instructed to halt all offensive operations against the enemy countrywide from the first till the third day of Eid,’ a statement released by the Taliban said.

‘But if the enemy conducts any assault or attack against you during these days, stand ready to robustly protect and defend yourselves and your territory,’ it added. 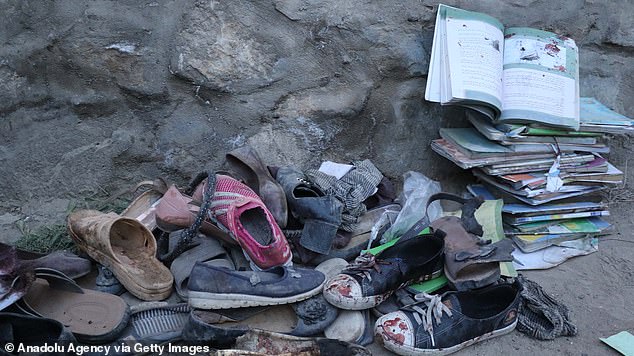 A pile of shoes, some stained with blood, recovered from the scene of the explosion which is thought to have killed at least 68 people outside a school near Kabul on Saturday 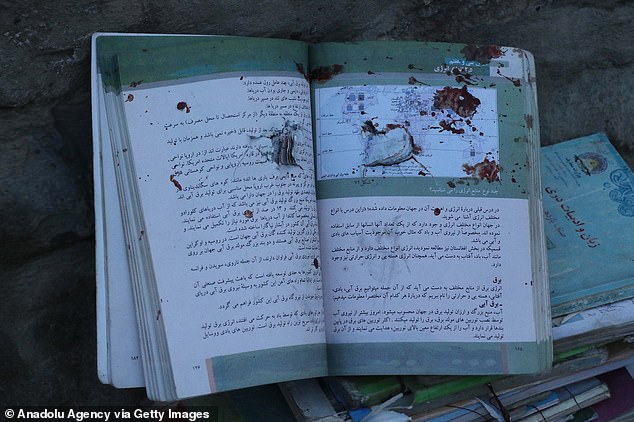 A notepad found at the scene spattered in blood. The attack took place outside of a school and many of the victims are pupils on Saturday 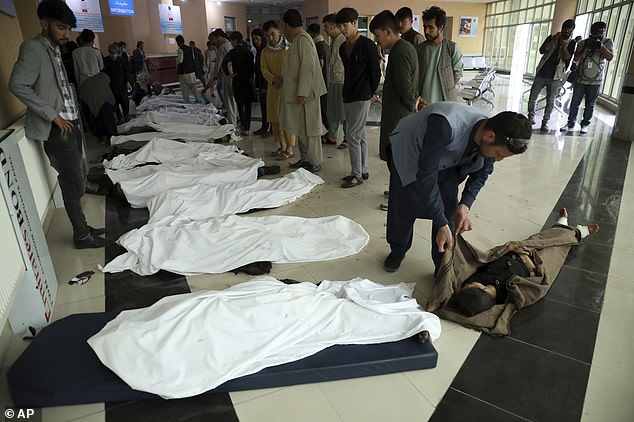 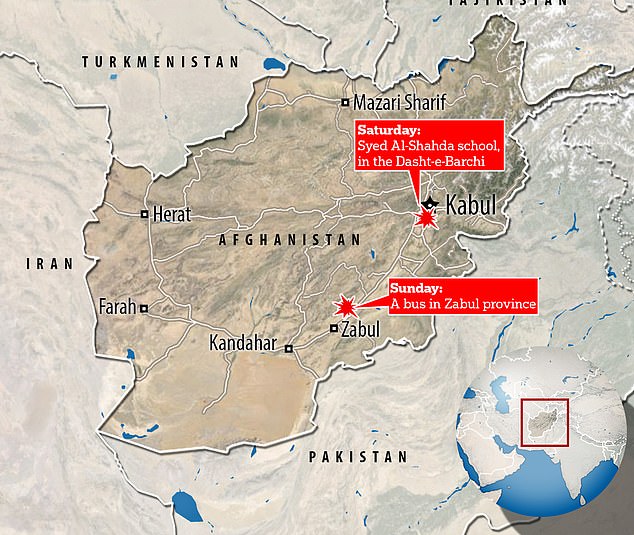 The bombing of the bus on Sunday night comes after 68 people, mostly schoolgirls, were killed at a school on Saturday

There was no immediate claim of responsibility for the Sunday night bombing. Taliban insurgents did not immediately respond to a request for comment.

News of the ceasefire came after the government blamed the Taliban for the brutal killing of 68 people at a girls’ school. Many of the victims were children aged between 11 and 15-year-old after a bomb exploded near the school.

The Taliban condemned the attack, which took place on Saturday in a majority Shiite district of west Kabul, and denied any responsibility – claiming it could only ‘Islamic State’.

Ambulances evacuated the wounded as relatives and residents screamed at authorities near the scene of the blast at Syed Al-Shahda school, in Dasht-e-Barchi neighbourhood.

The explosion went off as the girls were streaming out of the school at around 4:30 pm local time.

On Sunday, relatives buried the dead at a hilltop site known as ‘Martyrs Cemetery’, where victims of attacks against the Hazara community are laid to rest.

Bodies in wooden coffins were lowered into graves one by one by mourners still in a state of shock and fear, an AFP photographer said. 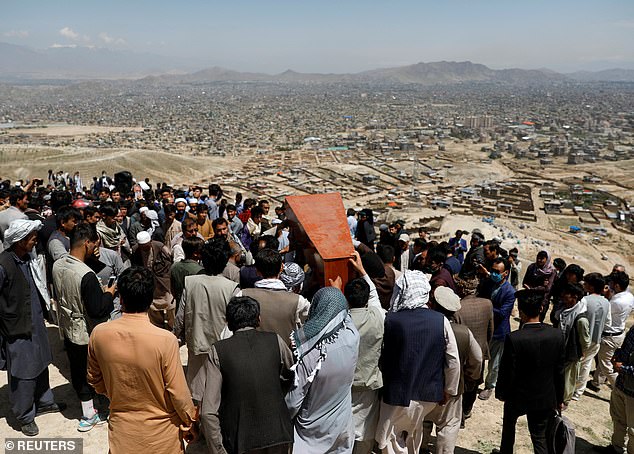 On Sunday, relatives buried the dead at a hilltop site known as ‘Martyrs Cemetery’, where victims of attacks against the Hazara community are laid to rest 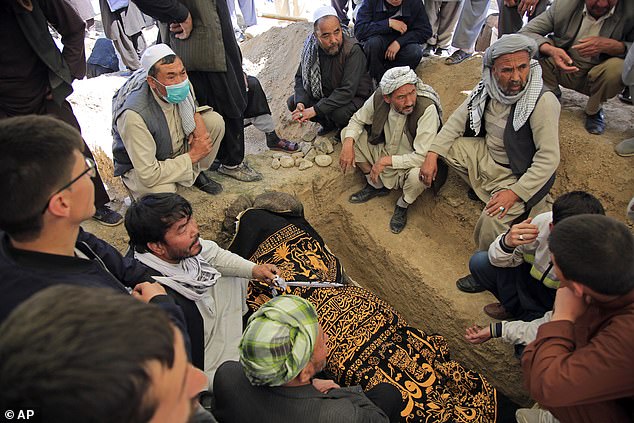 ‘I rushed to the scene (after the blasts) and found myself in the middle of bodies, their hands and heads cut off and bones smashed,’ said Mohammad Taqi, a resident of Dasht-e-Barchi, whose two daughters were students at the school but escaped the attack.

‘All of them were girls. Their bodies piled on top of each other.’

Books and school bags belonging to the victims still lay scattered at the site of the attack.

Attacks in the area are most often claimed by the Afghan Islamic State affiliate, but no group yet has claimed the attack on the school.

Washington blamed IS for a vicious attack last year in a maternity hospital in the same area that killed pregnant women and newborn babies.

The Taliban insist they have not carried out attacks in Kabul since February last year, when they signed a deal with Washington that paved the way for peace talks and withdrawal of the remaining US troops. 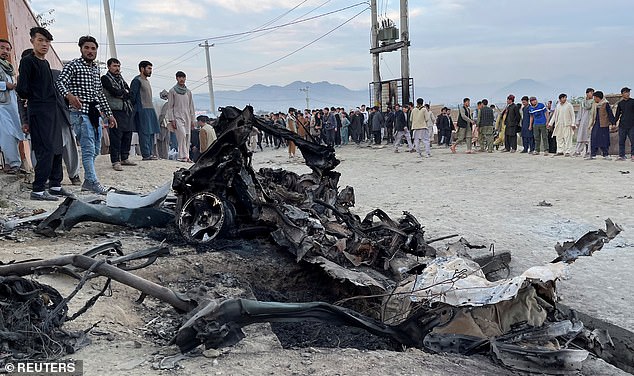 People stand at the site of a blast in Kabul, Afghanistan May 8, 2021. Residents in the area said the explosion was deafening An Afghan school student is treated at a hospital. At one nearby hospital, Associated Press journalists saw at least 20 dead bodies lined up in hallways An Afghan school student is treated at a hospital. The attack occurred just as the fasting day came to an end

But violence has been rising sharply in recent weeks in Afghanistan after the US and NATO announced it would withdraw all of their troops from the country by September 11.

The move marks 20 years since the 9/11 al-Qaeda attacks on the US which sparked a US-led war on terrorism in Afghanistan.

The Taliban have clashed daily with Afghan forces in the rugged countryside even as the US military reduces its presence.

The United States was supposed to have pulled all forces out by May 1 as agreed with the Taliban last year, but Washington pushed back the date to September 11 – a move that angered the insurgents.

The leader of the Taliban, Hibatullah Akhundzada, reiterated in a message released ahead of Eid that any delay in withdrawing the troops was a ‘violation’ of that deal.

‘If America again fails to live up to its commitments, then the world must bear witness and hold America accountable for all the consequences,’ Akhundzada warned in Sunday’s message.

Afghan President Ashraf Ghani has declared a day of national mourning for Tuesday.

‘This savage group does not have the power to confront security forces on the battlefield, and instead targets with brutality and barbarism public facilities and the girls’ school,’ he said in a statement.

India, meanwhile, called for the dismantling of ‘terrorist sanctuaries’ and a ceasefire to boost peace efforts.