England fans piled into the pub at 7am this morning ahead of the huge Euro 2020 match against old rivals Germany.

The eagerly anticipated match kicks off at 5pm and sees Gareth Southgate’s team face the Germans at Wembley.

Supporters are already getting into the swing of things with a beer garden in Sheffield filled with fans clutching pints and wearing England shirts just after 7am this morning.

Millions are expected to head to pubs across the country for the game – though there are fears some will be stuck at work because of the 5pm kick-off.

Some of those fans have taken to social media to reveal they will be taking a sick day to ensure they don’t miss the start of the match.

Other lucky supporters will be allowed to finish early by sympathetic bosses, meaning they will join around 22 million English fans set to tune in on TV.

The contest against Germany is one of the most-anticipated in recent memory, with fan parks sold out across the country and more than five million pints expected to be bought during the clash.

And one fan keen to join in on the fun wrote on Twitter today: ‘I’ve got a stomach ache on the morning that England face Germany. I think my boss would kill me if I phoned in sick today! But I’m feeling [sick]. Damnit! Come on England!’ 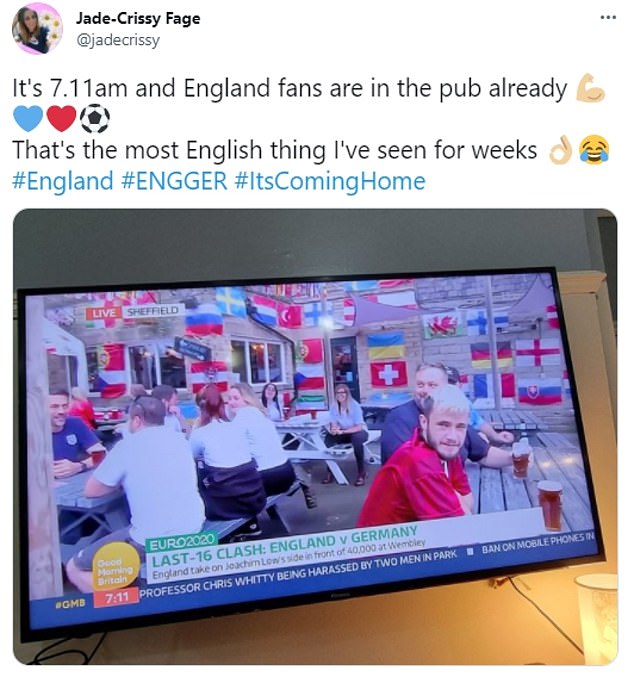 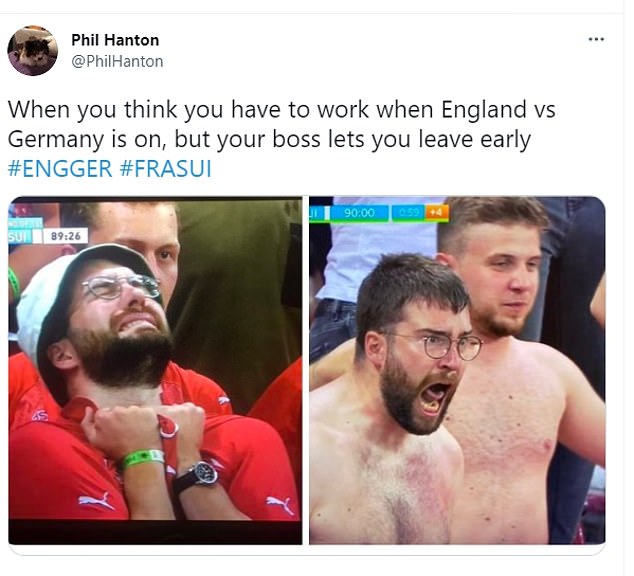 Another said: ‘Joked about my boss all last week about how I was ‘gonna be ill’ on Tuesday with England playing, sure enough, I’m f***ing sick as a dog.’

Luckier fans shared how their bosses would be letting them finish early ahead of the match.

One wrote: ‘When you think you have to work when England vs Germany is on but your boss lets you leave early.’

Another said: ‘As if my boss is letting us have an early finish for the England game.’

While a third added: ‘The Boss is letting us finish at 4pm today to get home in time for the England game! What a nice gesture.’

Yesterday, the Trade Union Congress (TUC) said employers should talk to their staff and make arrangements for the 5pm kick-off.

One fan shared a photo of an email they’d received from their boss which showed a picture of England manager Gareth Southgate alongside the words: ‘You’re going home to watch it coming home!’

The message added that a 4pm finish had been authorised for all workers.

However, other fans were not as lucky, forcing them to pull a sickie or come up with clever tactics to avoid missing the game.

One person wrote: ‘Booking a vaccine at 3:30 on Tuesday to finish early at work for the England game.’

Another said: ‘England are playing Tuesday….that’s my sick day sorted.’ 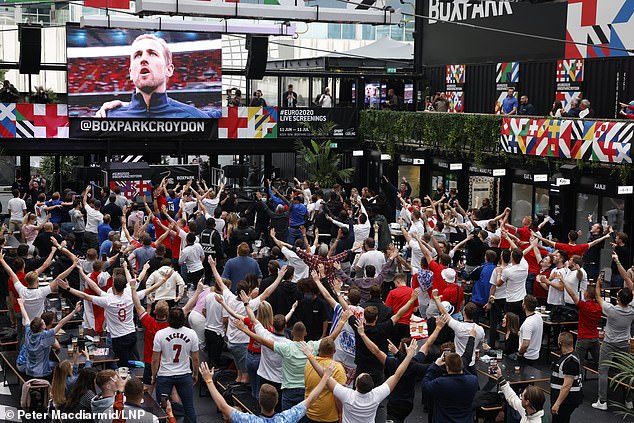 While a third added: ‘England-Germany. Taking another sick day and having two pints by noon.’

The TUC says flexible working has many benefits for companies such as cutting down on absenteeism and raising productivity.

It added that the rise in home working will mean many employees will already be at home.

Companies could also arrange for the Euros game to be shown somewhere on the premises where appropriate, the TUC has suggested.

Other suggestions include companies allowing staff to start or finish work early or late to allow them to work round the game.

TUC General Secretary, and England and Arsenal supporter, Frances O’Grady said: ‘Millions of workers around the UK will want to cheer on their national teams in Euro 2020 – especially after the tournament was postponed last year.

‘Bosses should talk to their staff and try and let people who want to watch the games do so, either at work or at home – and then claim back their time afterwards.

‘Whether it’s about major sporting events like Euro 2020, attending a medical appointment or picking up the kids from school, allowing people more flexibility in how and when they do their work makes them happier. It cuts absenteeism and raises productivity.’

Around 45,000 fans will be allowed into Wembley for the match with England fans warned to stay vigilant as touts offer tickets for up to £10,000 online.

Websites viewed by MailOnline are flogging tickets for the match for as high as £3,000, though it was reported in the Times that some were going for as much as £10,000, with campaigners urging supporters to ‘avoid them like the plague’.

Official tickets were initially allocated in a ballot, with those who were successful but unable to attend the game urged to sell their seats at the price they paid and to registered friends via the UEFA app.

But the newspaper claims some supporters are instead making a huge profit by advertising their tickets on secondary sites, accepting inflated payments and then transferring the electronic tickets to buyers by registering them as friends.

The sites selling pricey seats seen by MailOnline include LiveFootballTickets, which is offering tickets from £693.50 to £3,000 – plus a hefty £900 ‘service fee’.

Meanwhile, the British Beer and Pub Association (BBPA) hopes eight million pints will be sold today, with 5.25 million of those served during the last 16 fixture between the Three Lions and Germany.

The ongoing limitations mean beer sales will be 1.3 million pints lower during England’s match than if it was shown in pubs without restrictions, the BBPA estimates.

The trade body claimed this would result in more than £5 million revenue lost to pubs in England during the game.

It said some of its members had reported beer sales were lower than hoped for during the Euro 2020 tournament so far.

According to a BBPA survey of 1,000 pub-goers at the end of May, 85 per cent of pub-visiting football fans believe current Covid-19 restrictions will negatively impact their experience of watching Euro 2020 at pubs this summer.

Half said they would be more likely to watch games at a pub if all restrictions were lifted.

She added: ‘We know many pubs haven’t experienced the boost to their trade which they’d hoped for from the Euros.

‘No standing and limits on group sizes, as well as social distancing, are severely reducing the number of people who can enjoy the Euros at the pub.

‘With that said, there is still no better place to watch live sport on the telly than at the pub.

‘To secure our pubs for future tournaments and national occasions like the Euros, there can be no further delays to the lifting of restrictions.

‘On July 19 all restrictions on pubs must be lifted. We are counting down the days to freedom for our pubs.’