Enormous power of police must be kept in check

In February 2018, I was fortunate enough to give evidence at Parliament House before a bipartisan parliamentary committee that was conducting an extensive inquiry into external police oversight. The committee was looking at whether the current police complaint system was working and how it could be improved.

The committee handed down its report in September 2018 and acknowledged the significant failings of Victoria’s police complaints system. They also recommended a raft of significant reforms to overhaul the system. In particular, to give the Independent Broad-based Anti-corruption Commission greater bite, they recommended increasing its scope, breadth and depth. They even recommended that a new division of IBAC be created called the "Police Corruption and Misconduct Division". It is worth emphasising that these recommendations were made by a parliamentary committee comprised of all major political parties. 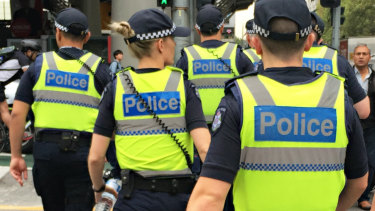 The current police complaint system needs to be improved.Credit:

Unfortunately, this report and its critical recommendations have sat on the shelf now for more than two years gathering dust. The same could not be said of police misconduct which has sadly continued to come to light in a variety of different formats, in both familiar and new ways that continue to shock the community.

Perhaps the most significant public airing of misconduct has occurred through the royal commission into Victoria Police which has resulted in further recommendations that IBAC be strengthened.

In the background of the royal commission and parliamentary committee report, IBAC has repeatedly called for greater funding, noting that it is currently stretched and potentially unable to fulfil the very function it was created for.

It is worth noting that IBAC deals with misconduct and corruption across all government sectors.

Monitoring and investigating police misconduct is just one facet of IBAC's role. IBAC’s inability to deal with its significant workload will undoubtedly have major consequences for the community.

However, arguably the consequences are even worse for those who have suffered and reported serious police misconduct.

Even prior to the royal commission and parliamentary inquiry, IBAC were referring more than 90 per cent of complaints back to Victoria Police.

In the face of increasing complaints and stretched resources, it is now hugely concerning that potentially even those serious complaints that IBAC may have previously dealt with will be bounced back to the very organisation that perpetrated them in the first place.

The issues with police investigating themselves are now well documented by the royal commission and the parliamentary report. It has also continued to be the experience of many of my clients and is confirmed by the statistics of various IBAC audits.

Depending on which statistics you look at, Victoria Police found only 2 per cent to 9 per cent of complaints substantiated over the last few years. Left with no other option, people with unsubstantiated complaints must pursue accountability through civil litigation.

In my experience, there is little, if any, correlation between whether someone is successful with their litigation and whether their complaint had been substantiated by Victoria Police.

It is usually only when a third party properly analyses the actions of police that the truth emerges.

In August 2019, my firm ran a case for our client, Eathan Cruse, against Victoria Police. This case is a classic example of the power of independent oversight and of the failings of the current police complaints system.

In addition to awarding Eathan damages for the pain and suffering he had been put through, the judge also referred the case back to IBAC to independently investigate.

Without independent oversight, this time in form of the judiciary, Eathan’s case would have been swept under the rug.

Police wield enormous power. It is absolutely critical that this power be checked and where it is abused that the police officers are held to account. Our current system is straining to keep its head above water. This is a failing for all Victorians.

As demonstrated by the plethora of police misconduct cases that keep appearing in your daily newsfeed, this does not affect just one area of the community, but people of all walks of life. This is something that could happen to you.

It shouldn’t take a bipartisan parliamentary committee, royal commission, Supreme Court judge and a corruption watchdog to force the government to act. Yet here we are.

The Andrews government must take charge and act to ensure that Victorians have a strong independent police complaint system. It must implement the recommendations of the parliamentary committee and royal commission without delay.

Ultimately, a healthy and robust complaint system is essential if Victoria is to have a healthy and robust police force. The ocean of misconduct is not just lapping out our feet but is now up to our knees. We must act now and take advantage of this unique opportunity in history to turn back the tide and strengthen our sea walls.