Victoria's list of COVID-19 exposure sites has been dogged by errors and quietly announced corrections since the fresh outbreak of the disease began, as a leading epidemiologist warned that incorrect information could result in new chains of infection.

In one case a cafe was identified as having hosted a coronavirus-infected person on December 30, only for the Department two days later to revise the date to December 21. In another case, the time-frame and advice issued for a potential exposure site was changed five times over two days. 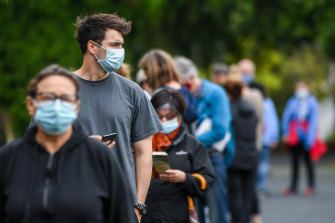 People line up at the Brighton Town Hall testing centre on Tuesday.Credit:Joe Armao

The admissions come as the Victorian government confirmed that up to five cases of the mutant strain of the virus that is ravaging Britain had been found among hotel quarantine detainees in Melbourne. Victoria has urged the Commonwealth to consider beefing up the nation's defences against that strain, including the possibility of suspending flights and shipping from the UK.

State testing chief Jeroen Weimar apologised on Tuesday for the errors in contact tracing as Police and Emergency Service Minister Lisa Neville pledged in future to post on social media any changes to official warnings on premises where the deadly virus may have spread.

Three new cases of COVID-19 were recorded in the Victorian community in the 24 hours until Tuesday morning, all linked to the Black Rock Thai restaurant cluster, after more than 32,000 tests were conducted. The cluster has so far accounted for all of the state's 27 active community cases across 14 households.

The government's concessions on its exposure site notifications came after days of frequent changes and corrections to the Health Department's list of danger spots, with new locations added and then removed, sometimes erroneously.

In one instance, customers of a Woolworths supermarket were warned of an infection risk, before the name of the outlet was corrected to Coles.

In another, the list was quietly changed on Monday to show a COVID-positive person had dined at the Guilty Moose Cafe in Albert Park on December 21 after the wrong date, December 30, had been displayed for at least two days.

Patrons at the Lion Hotel in La Trobe Street were initially told to isolate only until they tested negative, before that advice was upgraded to 14 days of quarantine.

La Trobe University epidemiologist Associate Professor Hassan Vally said the danger of communication failures was that people with coronavirus would be missed and be moving around the community without knowing they were infected.

“As I heard another epidemiologist say, no one ever gets to the end of a pandemic and says that we communicated too much,” he said.

“You’ve got to take on feedback and keep on adjusting your strategy.”

Mr Weimar said the Department of Health and Human Services had already made changes to its website to reflect public feedback and lessons learnt from mistakes.

"In an operation of this scale, moving at this velocity, where we're making changes and adjustments not even hour by hour but minute by minute … I think if you look at the website today, we're highlighting much more now, a clearer way of saying here is emerging breaking news,” he said.

“If we’ve got something massively wrong, where we have directed a whole bunch of people down the wrong rabbit hole, I think we’ll be up-front about them,” he said.

He said he expected “everyday Victorians” to be checking the DHHS website “at least once or twice a day”.

Ms Neville acknowledge on Tuesday that mistakes had been made and pledged improvements but the minister also said that one of the most important lessons for Victoria's deadly second wave of COVID-19 infections had been the need for rapid notifications of potential exposure sites.

"We put it up as quickly as possible. That's the decision that's been taken and I think that's one that we've learned from the last time – as quickly as you can, get it up," the minister said.

"We've got the website and awe now put out any corrections on social media, in relation to any errors that have occurred in relation to exposure sites."

But state opposition leader Michael O'Brien said the government had failed to be up front about the mistakes and corrections.

“It’s not about the government’s political embarrassment. It’s about getting the right information into the hands of Victorians as quickly as possible and being up front about that.”

The Black Rock cluster began when a woman who travelled from NSW dined at the Smile Buffalo Thai restaurant on the night of December 21. There are yet to be any other cases linked to other public exposure sites, with people instead catching the virus from close contacts in private homes, and one via a work connection.

The state government also said it had been successful in its effort to persuade the federal government's key decision-making body, the Australian Health Protection Principle Committee, to examine ways to boost Australia's defences against the highly contagious mutated strain of the virus which has forced Britain back into a full national lockdown.

Ms Neville said earlier in the day that suspensions of flights from the UK and the closure of Australian ports to British shipping might be considered, but the federal health Department would confirm only that it was closely monitoring instances in Australia of the variant COVID strain, known as lineage B.1.1.7.

Repatriation flights of stranded Australians from Britain would continue, a departmental spokeswoman said.

The state government, which is also pushing for all states and territories to introduce testing and quarantine for international airline crews, confirmed that genomic sequencing had positively identified four cases of the variant strain with another lab results awaited on another suspected case.

The infections are believed to be among returned international travellers and not airline workers.