Verhofstadt called on Brussels to renegotiate its ‘ill-conceived’ contracts with manufacturers in a video titled ‘the inconvenient truth behind the vaccination fiasco of the EU’.

In the nine-minute clip, the MEP blamed the European Commission for the shortages and slow rollout and slammed the ‘diplomatic disaster’ brought about by triggering Article 16 of the Northern Ireland Protocol.

‘If you believe in Europe, if you love Europe, it’s your duty to be the most vocal critic, especially when Europe falls short of its potential and our expectations. 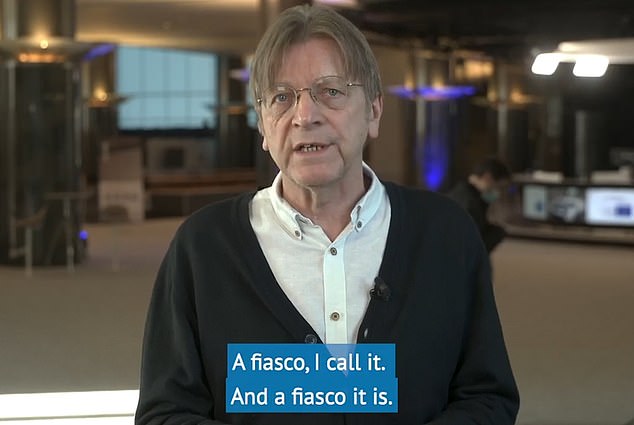 Verhofstadt pointed out that while the majority of coronavirus vaccines were produced in Europe, EU countries were falling behind on vaccine rollouts, with only for per cent of EU citizens having received their first dose, compared to 20 per cent in the UK and more than half in Israel.

‘It is not so much the capacity in Europe that is the problem, but the allocation of the produced doses,’ Verhofstadt said.

‘There is a crucial lack of supply in every European member state, a lack that we don’t see in the same dramatic proportions in countries like, for example, in the United States, in Britain, in Canada or in Israel’.

The video, posted to Facebook on Saturday, Verhofstadt blamed the slow roll out on the contracts between the EU and the drug manufacturers, seeming to dismiss European Commission president Ursula von der Leyen’s explanation last week that Brussels had simply been ‘too optimistic’ regarding production volumes and approval deadlines for regulation.

Verhofstadt, who twice ran for the commission presidency, said the contracts were vague and gave too much wiggle room to pharmaceutical companies at the potential expense of the health of Europeans.

‘I think the measures taken by the Commission are hugely symbolic, insufficient and counter-productive,’ he said.

The MEP urged the EU medicine’s agency to follow faster approval procedures for new vaccines and called for a renegotiation of the ‘ill-conceived’ contracts to include binding deadlines.

He also called for more funding for the pharmaceutical sector and for the EU to organise the acquisition of medicines to avoid making similar mistakes in any future pandemic.

‘The European Union is not a problem, but the solid basis for the solution,’ he said.