EuroMillions winner who scooped £58m plans to build his own home

EuroMillions winner who scooped £58m plans to build his own home, buy a new car take a trip to Disney World with his daughter and get his mother a new hip, before letting his entire family retire early

The EuroMillions winner who scooped a £58million jackpot hopes to spend his fortune on building his own home, a new car and a new hip for his mother.

Mr Hoyle, whose mother works as a school cleaner and father works in a factory, also wants to ensure his £58,366,487 win means his whole family can now retire early.

He has been handed that life-changing sum when Britain and much of the world is in the midst of an unprecedented lockdown due to the coronavirus pandemic. 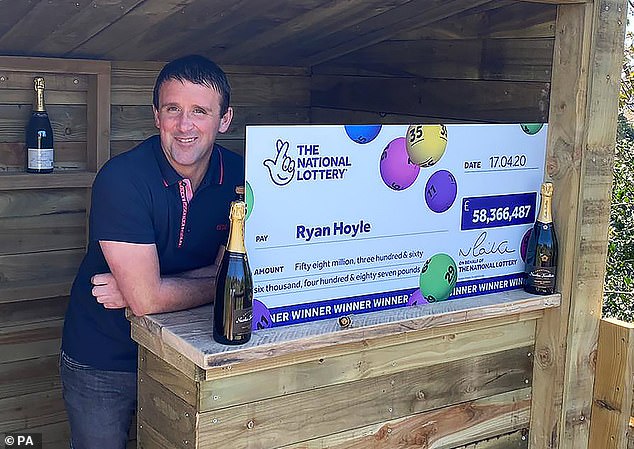 Self-employed Ryan Hoyle, 38, of Rochdale, Greater Manchester, whose win of £58,366,487 means he is in 20th place on the National Lottery millionaires’ rich list

On opening his EuroMillions account to find the message ‘You’ve won!’ as he awoke at 6am last Saturday in his one-bedroom rented flat, he was met with a message saying he had landed a mere £2.30.

It was only on closer, bleary-eyed inspection that he spotted a second line with what he described yesterday as ‘a lot of numbers’ which he thought ‘might be millions’.

‘Shaking’, his first thought was to call his mother, a school cleaner, and his father, a factory worker, who initially assumed he’d locked himself out of his home again.

Mr Hoyle had to resort to passing his mobile phone to them through the window so they could check his eyes weren’t deceiving him – and they confirmed he had indeed scooped a monumental £58,366,487.

‘Dad congratulated me from inside their house whilst Mum shouted out if she could retire now?’ the father-of-one said yesterday. ‘I replied ‘Yes!’.

After a call to Camelot to confirm the win, word spread fast among friends in Rochdale.

By that afternoon he was drinking a celebratory beer with his brothers, with whom he has been working in accordance with lockdown rules – all the while doing their best to maintain social distancing.

‘I just couldn’t be alone but we kept more than two metres apart,’ he said. ‘I needed to talk to them and ask their advice.’

With so many people in the know, Mr Hoyle opted to make his win public. 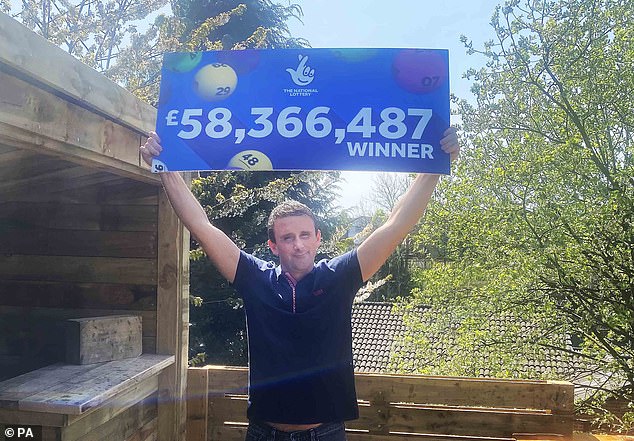 Mr Hoyle, whose mother works as a school cleaner and father works in a factory, wants to ensure his £58,366,487 win means his whole family can now retire early

Previous winners of mega-jackpots have been unveiled at luxury hotels in front of a phalanx of photographers.

But he had to make do with a friend filming him in the back garden on a mobile phone – accompanied by the obligatory giant cheque, which was dispatched by courier.

Even the ensuing champagne-spraying had to be carried out from a safe distance.

Now the hard-working self-professed white van man is making plans to start spending the mountain of cash – but his initial priority is helping out family.

‘Mum works at the local school as a cleaner and has been struggling with a sore hip for years, so it would be great to see her take early retirement straightaway,’ he said. 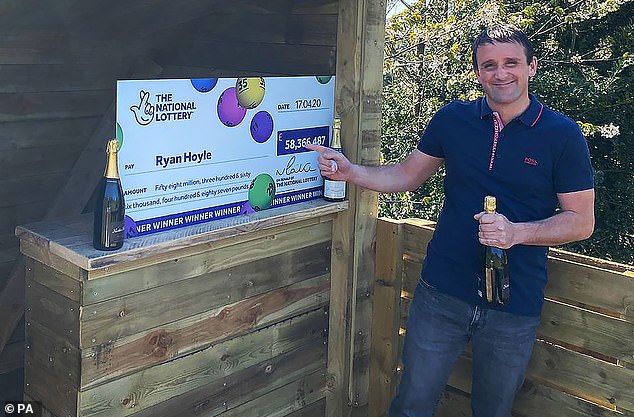 Mr Hoyle has been handed the life-changing sum when Britain is in the midst of an unprecedented lockdown due to the coronavirus pandemic.

‘She was down for a hip replacement but all operations are on hold at the moment due to the coronavirus crisis, so maybe I can help with that too.

‘And this win means my Dad can stop working at the factory by the end of the week too.’

Also on the list for a helping hand is one of his brothers, a digger driver who recently suffered a brain haemorrhage and was due to return to work soon.

‘Basically Mum, Dad and my brother can all retire this week,’ he added.

His 11-year-old daughter has a more down-to-earth treat in store. 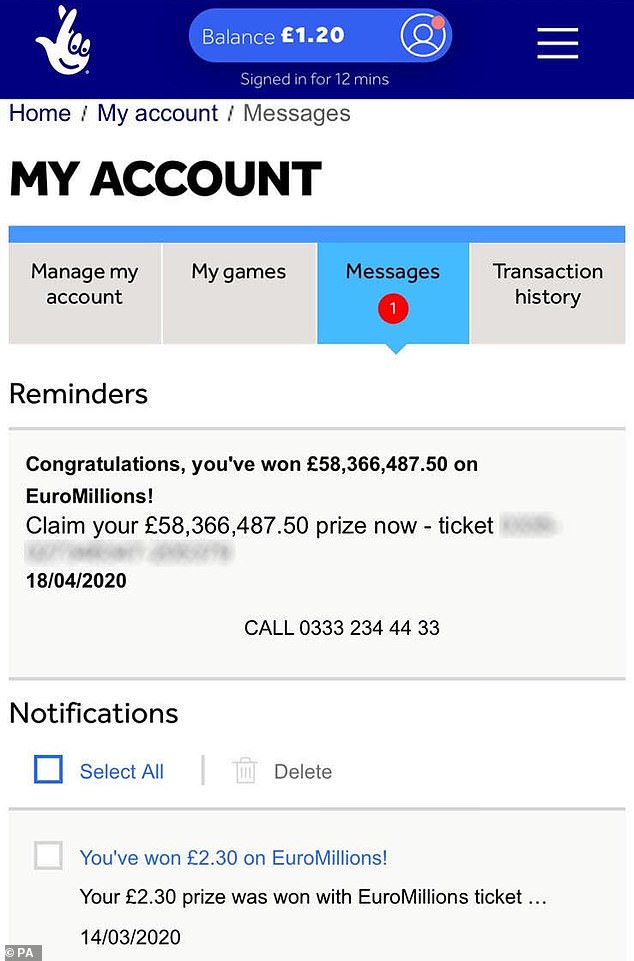 On opening his EuroMillions account to find the message ‘You’ve won!’, the 38-year-old was met with a message saying he had landed a mere £2.30 – before he realised his huge win

‘If she’s lucky and she behaves well, she might get her iPhone 11,’ said Mr Hoyle, who shares childcare with her mother.

Work-wise, he has been helping out a brother with a refurbishment and has no plans to leave him in the lurch.

‘I’m nearly done so will see the job through. After that, who knows?’.

But he insisted: ‘Thirty-eight years old – there’s no chance I’m going to retire.’ Once travel restrictions are finally relaxed, a trip with his daughter to Disney World in Florida is on the cards.

A season ticket to watch his beloved Manchester United at Old Trafford will also be a priority post-lockdown, as will working on his golf.

As for a car to supplement his two-year-old white van, Mr Hoyle has no idea what he wants. 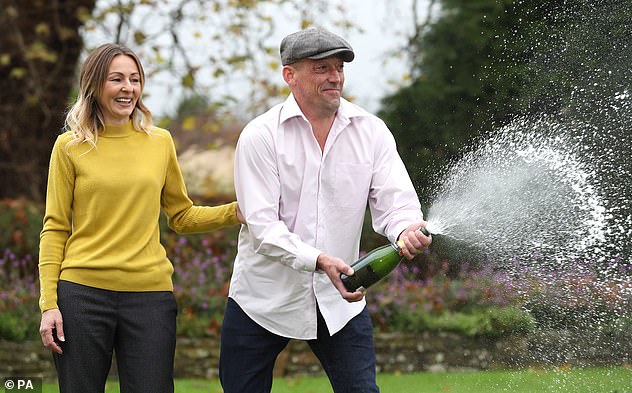 Steve Thomson, 42, and his wife Lenka, 41, became the seventh-biggest winners in history with their gigantic prize last November, which saw them claim £105million on the EuroMillions

‘I guess I’ll have a look in Rochdale and see what they’ve got. I doubt it will be a sports car or anything too flash as that’s not me.’

Buying a house will also be a priority, and eventually he may build his own home – but he doesn’t envisage a brash, millionaire’s pad, explaining ‘you don’t need a swimming pool in Greater Manchester, it’s not hot enough’.

Friends were thrilled for him yesterday.

Jan Louie Wormald, also 38, who has known him since they were four, said: ‘It genuinely couldn’t happen to a nicer guy’.

He added: ‘Laid back, hardworking lad who loves his daughter. So pleased for him and his family.’

A £57million jackpot from last month’s draw – which took place days before the lockdown came into force – remained unclaimed over a week later, but organisers Camelot have not said if anyone has come forward.

Who is the biggest ever UK lottery winner? Two couples and a former car mechanic top list

The couple, who have been married for 30 years, said they were ‘not scared’ of the wealth because they were going to have ‘so much fun’ with the money.

The pair, a retired TV cameraman and a retired psychiatric nurse, from Largs, in Ayrshire, said their children Carly, a photography student, and Jamie, a call centre worker, would be bought their own homes and cars.

The family made a £1million donation to the SNP shortly after winning.

The marriage ended just 15 months into their new jackpot winning lives, citing the stress of the money as the reason they needed to split.

At the time, a spokesman for Mrs Bayford said: ‘Gillian Bayford confirms that her marriage to Adrian has broken down irretrievably and they have separated.’

It came after Mrs Bayford was forced to deny she had an affair with the couple’s gardener, Chris Tovey.

Adrian and Gillian Bayford, from Suffolk, took home more than £148 million in August 2012

5. An unnamed ticket-holder claimed just over £113million in October 2010, and chose not go public.

Neighbours in Croydon described he and partner Nicky Ottaway moved out ‘almost overnight’ after they scooped the EuroMillions jackpot last March.

Mr Trotter admitted at the time that he was like his namesake, Del Boy Trotter from Only Fools And Horses.

7. Steve Thomson and his wife Lenka, from West Sussex, became the UK’s biggest EuroMillions winners when they claimed a prize worth £105million in November 2019.

8. A couple from Cambridgeshire, Dave and Angela Dawes, won more than £101million on their third go on the EuroMillions draw in October 2011.

Mr Dawes said he ‘didn’t sleep a wink’ the night of the win, as it was too late to call Camelot after the couple checked their numbers.

Last year, the couple were taken to court by his son, an Afghanistan veteran, Michael Dawes, 32, who said he was ‘ungenerous in spirit’.

But a judge ruled the millionaire father does not need to keep bailing out his son, who burnt through £1.6million in two years, and came back for more, failing to heed his stepmother’s advice to stop eating at the Ritz and go to McDonald’s instead.

10. The Davies from Wales family won £61million on the EuroMillions in 2016

Stephanie Davies, 23 is said to have ‘reluctantly’ purchased the ticket at the time after her mother Sonia called her from Florida begging her to go out and buy one.

Keith Reynolds, Sonia Davies, Stephanie, Courtney Davies and Steve Powell all scooped money on the jackpot and said they were the ‘luckiest people’ on the planet to have won.