Facebook has been newsworthy for controversial reasons of late but one of the strengths of Facebook is the rise in online neighbourhood groups whose members report on community safety issues, help to find lost pets, share snapshots of sunrises and offer for free household goods after a declutter. In this way, many things of value change hands, from the small (children’s toys, pot plants, books) to the large (dining tables, couches, televisions). The quality is often very good. 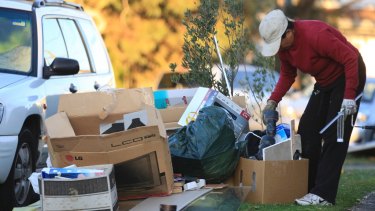 After a declutter, one person’s trash can turn out to be another person’s treasure. Credit:James Alcock

We found the exercise bike in one such clean-out by the side of the road. There were a few cobwebs on its base, as if it had been stowed away and forgotten in a corner of a garage. The handlebars had slipped upside down and the display screen did not work. Other than that, it was pretty damn good and more than sufficient for our needs.

We got the bike home, dusted it off, flipped the handlebars into an upright position and tightened them with a screw. A new battery brought the display screen to life, showing measurement capacities in time, distance, calories and speed.

I began riding 20 kilometres a day while reading a book or listening to a podcast. “I’m just going to the gym,” I’d call over my shoulder as I headed to the next room for an hour on the bike.

The bike has been a game-changer in the constant battle to find enough time in the day for competing personal, work and family commitments. 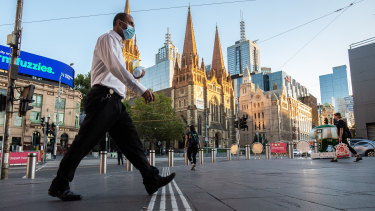 The past year has made us deeply aware of the fragility of our freedoms.Credit:Scott McNaughton

In a year that has made us deeply aware of the fragility of our freedoms, whose legacy includes a stubborn fearfulness in Melbourne that rises to the surface whenever the prospect of another lockdown looms, an unexpected, counterbalancing flowering of extraordinary generosity towards others has also proved a legacy of that year.

It is more than just a certainty of purpose in what material possessions should be kept and which ones moved on. It is more than just one person’s trash being another’s treasure. There seems to be a firm desire to be of greater service to one other after a year in which we had very few real opportunities to interact.

In these strange times, when the shadow of the virus still flits about even while the vaccines offer us genuine hope of some protection, in a time when it is not unusual for disturbing rumours and revelations to be transacted extensively in the foothills of social media before finding their way into court for proper determination, these local pockets of care and open-hearted generosity restore our faith in each other. They remind us that most people are well-intentioned and kind and will gladly help a neighbour.

Melissa Coburn is a freelance writer.