‘Ten minutes of silence, then all hell broke loose’: Exhausted doctor tells of chaotic 52-hour shift filled with ‘screams, blood and open wounds’ in half-destroyed hospital as he treated victims of explosion that tore apart Beirut

A doctor from Beirut has given a harrowing first-person account of what it was like treating some of the 5,000 victims of a massive explosion which tore the city apart earlier this week.

Bassam Osman, who describes himself as an aspiring heart surgeon from the American University Beirut Medical Center, told of how he treated hundreds of patients during a 52-hour shift in a hospital that was also badly damaged in the blast.

He described being surrounded by ‘screams, blood and open wounds’ in corridors whose lights had gone out and ceilings fallen down, but knowing he had put aside his own panic in order to help. 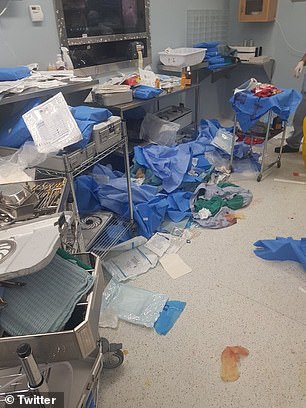 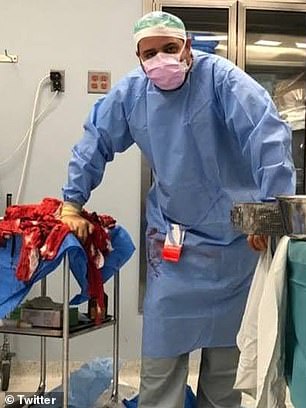 Bassam Osman, right, has described the 52-hour shift he spent working at a hospital in Beirut treating some of the 5,000 victims of the blast which also killed 137 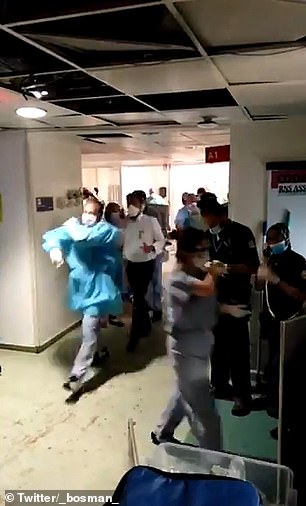 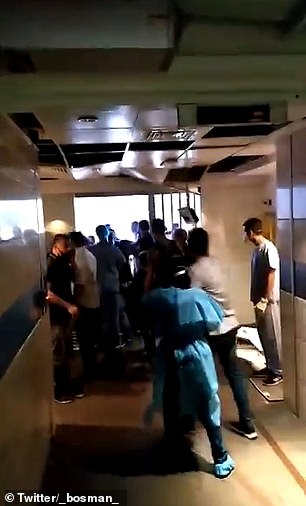 Osman described being surrounded by ‘screams, blood and open wounds’ in a hospital that was partially destroyed in the blast (left and right)

The blast occurred around 5pm local time Tuesday as a fire burning in a warehouse at the city’s dock ignited 2,750 tons ammonium nitrate which exploded with the force of a small nuke.

Osman recalled that there was around 10 minutes of silence between the blast happening, and the first patients coming through the door.

After that, he said, all hell broke loose.

‘With the flood of casualties through one door where an attempt of triage was going on, all concepts of treating and healing were not applicable,’ he wrote on Twitter.

‘We were left to improvise so we make the best of what we have in terms of equipment and manpower.

‘There was no moment in my life where I felt more in touch with my own and my surrounding humanity.

‘Casualties varied from simple lacerations to holes in the hearts. Many people had to be moved to the operating room and it felt like we were racing time and uncertainty.

‘In treating mass trauma there are few basic rules and all else is left to your hunch.

‘The agility surgeons were working in was fictional. People were put on operating tables, opened, fixed and disposed in no time. 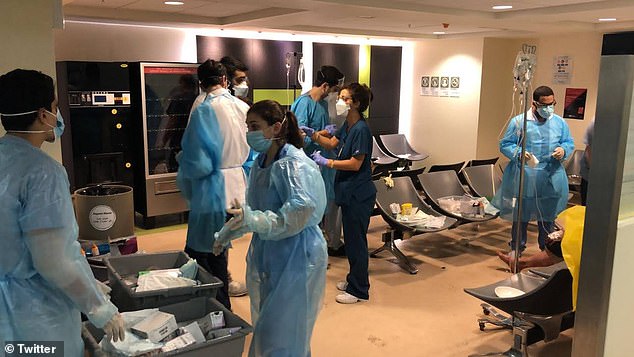 Osman said that every available member of staff pitched in to treat victims wherever they could, for injuries ranging from lacerations to holes in their hearts 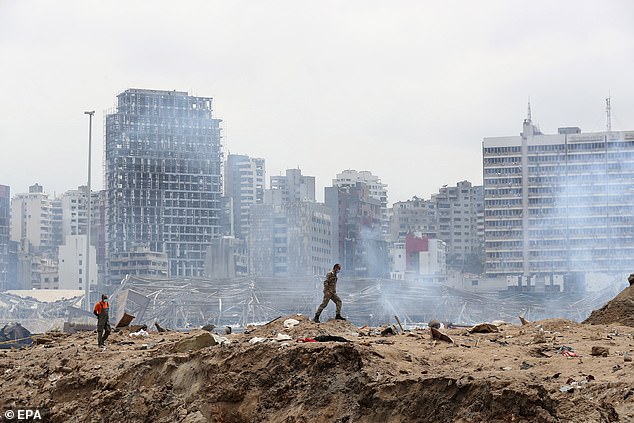 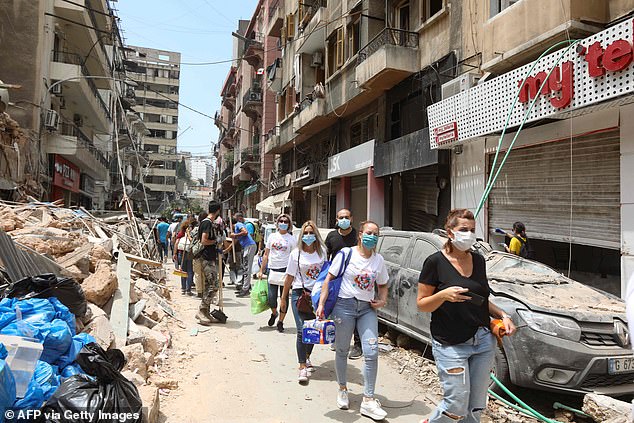 Volunteers arrive on Gouraud street in the Gemayzeh neighbourhood of Beirut, to clear debris

‘Many of the injured did not make it, but we were only left with our emotionless detachment that held our sanity to move and save the next life.

‘As time passed throughout midnight, the scene became slower. Hundreds were discharged home and we were left with nearly a hundred admitted patients.

‘A hundred patient to round on starting [at] midnight. Time gave us a break but exhaustion became the enemy.

‘The next day, casualties continued to flood into the emergency department but in a slower more organized manner. People were devastated, scared and wounded.

‘With no rest, in what seemed like a one long never ending day, all doctors and nurses seemed to still have it all together.’

Describing his feelings now that the initial crisis is over, Osman – like many in Lebanon – expressed frustration at the country’s rulers, who were widely viewed as corrupt and incompetent even before the explosion.

‘The greatest feeling is not sadness, not anger, not despair, it is abandonment,’ he said.

‘We already lost all hope in a selfish, comatosed, and now, a criminal personnel that is governing us against our will.’

Some Lebanese were lost for words to describe the impact of the blast, which dwarfed anything the country had experienced in its violence-plagued history.

The deadly explosion left dozens more missing and a staggering 5,000 people wounded, many by flying shards of glass as windows imploded. 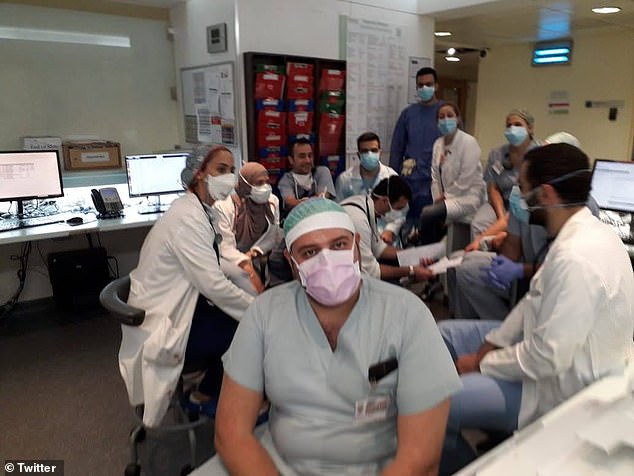 Osman and his colleagues are pictured around midnight following the blast, when he estimates they had already treated hundreds of patients in just a few short hours

The death toll was expected to rise as rescue workers keep digging through the rubble.

Offering a glimmer of hope amid the carnage, a French rescuer said there was a ‘good chance of finding… people alive’, especially a group believed to be trapped in a room under the rubble.

‘We are looking for seven or eight missing people, who could be stuck in a control room buried by the explosion,’ the colonel told Macron as he surveyed the site.

Beirut’s governor estimated up to 300,000 people have been left temporarily homeless by the destruction, which he said would cost the debt-ridden country in excess of three billion dollars.

According to several officials, the explosion was caused by a fire igniting 2,750 tonnes of ammonium nitrate fertiliser stored for years in the warehouse.

Even as they counted their dead and cleaned up the streets, many Lebanese were consumed with anger over a blast they see as the most shocking expression yet of their leadership’s incompetence.

‘We can’t bear more than this. This is it. The whole system has got to go,’ said 30-year-old Mohammad Suyur as he picked up broken glass in Mar Mikhail, one of the worst-hit city districts.

Prime Minister Hassan Diab and President Michel Aoun have promised to put the culprits behind bars, but trust in institutions is low and few on Beirut’s streets held out hope for an impartial inquiry. 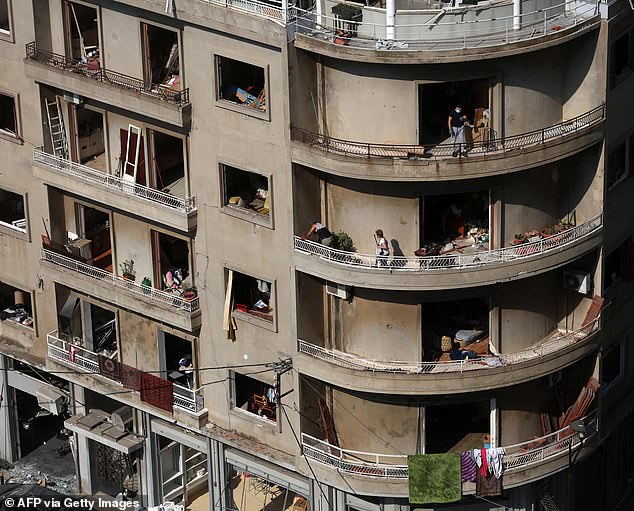 People clear debris from their apartments, in the neighbourhood of Mar Mikaehl which was badly impacted by the explosion

The disaster could reignite a cross-sectarian protest movement that erupted last October and had looked briefly like it could topple what activists consider a hereditary kleptocracy.

The euphoria had faded amid grinding economic hardship and the coronavirus pandemic. But since the disaster, social media is once more rife with calls to kick out Lebanon’s widely reviled leaders.

‘Lebanon’s political class should be on guard in the weeks ahead,’ Faysal Itani of think-tank the Center for Global Policy wrote in The New York Times.

‘Shock will inevitably turn to anger.’

Human Rights Watch supported mounting calls for an international probe into the disaster, saying it was ‘the best guarantee that victims of the explosion will get the justice they deserve’.

In France, prosecutors have opened a probe into the blast over injuries suffered by 21 French citizens.

Amid the gloom and fury, the aftermath of the terrible explosion has also yielded countless uplifting examples of spontaneous solidarity.

Lebanon’s diaspora, believed to be nearly three times the tiny country’s population of five million, has rushed to launch fundraisers and wire money to loved ones.

In Beirut, much of the cleanup has been handled by volunteers in improvised working groups who bring their own equipment and organise online appeals for help.

‘We’re sending people into the damaged homes of the elderly and handicapped to help them find a home for tonight,’ said Husam Abu Nasr, a 30-year-old volunteer.

‘We don’t have a state to take these steps, so we took matters into our own hands.’