At least five people were killed and more than 20 injured in Somalia in a blast on Sunday during festivities to mark the Eid al-Fitr festival.

Speaking from Baidoa, 250 kilometres (150 miles) west of the capital Mogadishu, police officer Mohamed Muktar said: ‘The initial information we have received indicates the dead bodies of five people were collected from the scene of the blast and more than twenty others have been wounded.’

The cause of the explosion was unclear. 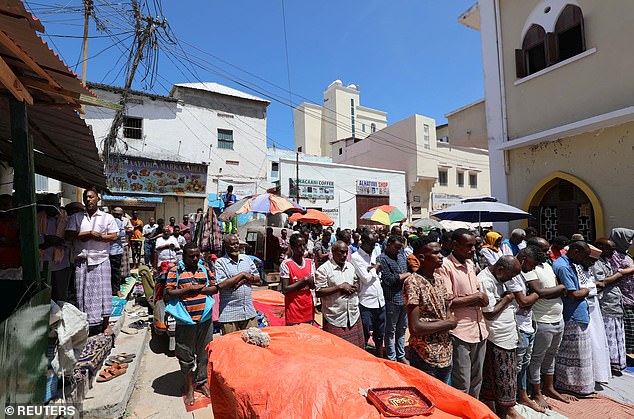 Muslim worshippers participate in the last Friday prayer of Ramadan outside the mosque in Hamarweyne district of Mogadishu, Somalia May 22, 2020

Muktar added: ‘The number of wounded people is over 20 including women and children, so that death toll could increase because some of these people are seriously wounded.’

Witness Mohamud Ibrahim said the crowd had been dancing and singing when the blast occurred.

Mr Ibrahim said: ‘I’m not an expert but I think there was a roadside bomb involved, the blast was huge and it caused casualties more than a grenade may cause.’

Another witness, Abdi Hassan, said people had gathered at the spot on both Saturday and Sunday to enjoy the Eid festivities, especially dancing.

Mr Hassan said: ‘How can someone shed the blood of innocent civilians when they have been enjoying their Eid festival?

He added: ‘These perpetrators whoever they are have turned their happiness into sadness.’

The Muslim world is celebrating the Eid al-Fitr festival, one of the most holy Muslim times of the year marking the end of the holy month of Ramadan.

Al-Shabaab, an Al-Qaeda affiliate, is suspected of being the perpetrator of the attack after being driven out of Mogadishu in 2011 and losing most of its strongholds.

The militant group still controls vast swathes of the countryside. 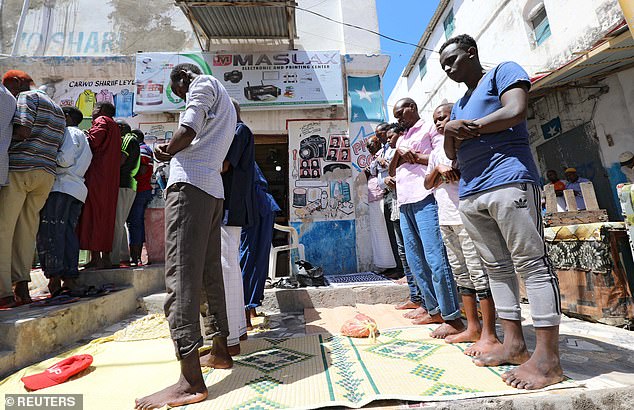 Muslim worshippers participate in the last Friday prayer of Ramadan outside the mosque in Hamarweyne district of Mogadishu, Somalia May 22, 2020

In 2013 and 2016 the group launched deadly attacks on beachfront restaurants in Mogadishu.

Its militants have vowed to overthrow the internationally-backed government in Mogadishu and still carry out attacks including suicide bombings against government and international targets.