WITH airlines worldwide slashing flights due to the coronavirus pandemic, dramatic flight tracker images show emptied skies across the globe.

The illustrations come before one of the world’s busiest airports – Heathrow – will next week close one of its runways, as air traffic continues to plummet globally. 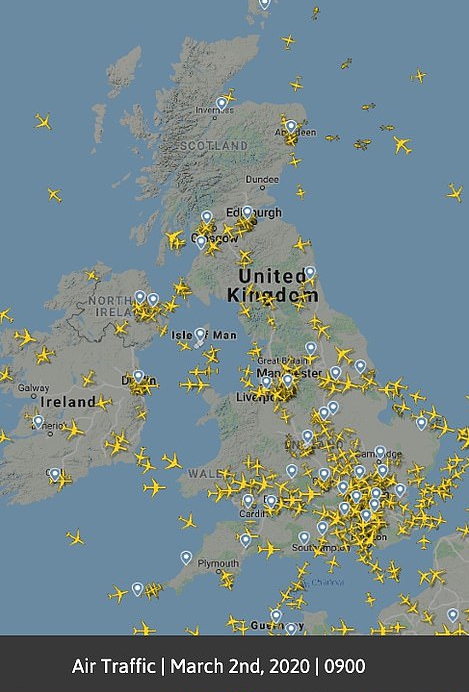 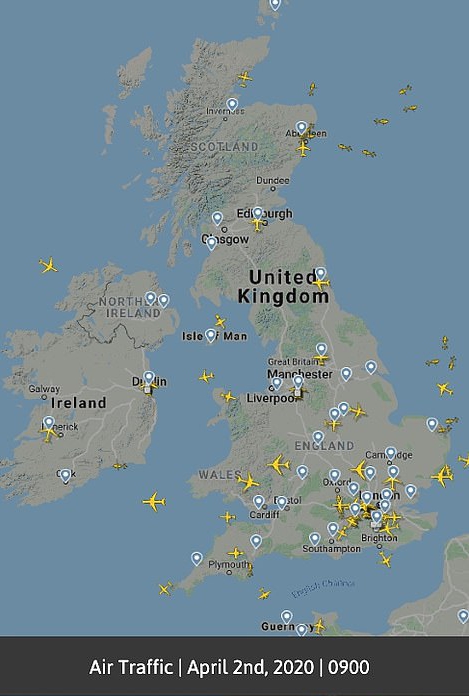 They reveal stark differences in skies above the UK, America, Australia, New Zealand and Europe before and after many countries brought in restrictions on international flights.

After first breaking out in China, the coronavirus has spread across the globe, infecting more than one million people while about 53,000 have died.

Among the many industries hit hard economically as a result, the passenger travel sector has been decimated by the pandemic.

The world economic forum said the "potent combination of trip cancellations and country-specific restrictions on international flights has had a staggering impact on the $880 billion global airline industry.

"Nearly all countries have some type of travel advisory in place, with many encouraging people to avoid non-essential travel even before Covid-19 was officially considered a pandemic by the World Health Organization (WHO)." 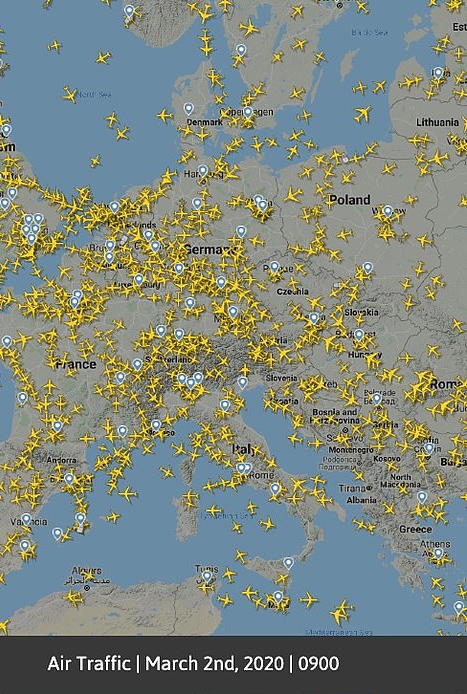 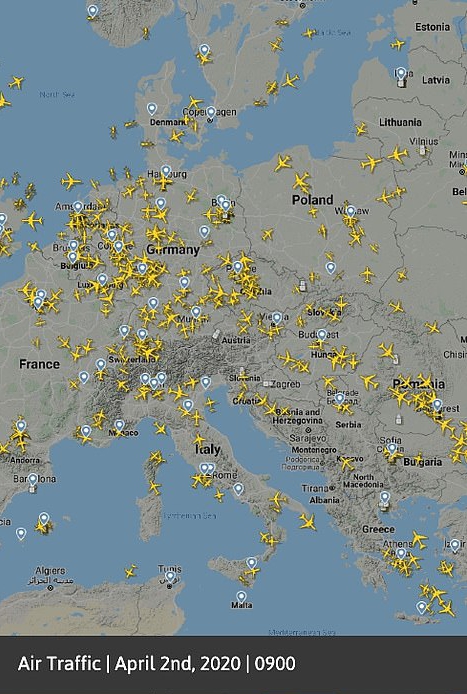 In London, Heathrow will operate its landings and takeoffs from one strip from Monday April 6 to "increase resilience and safety for staff, passengers and cargo" throughout the Covid-19 outbreak.

The major airport has two runways and will alternate which one it keeps open on a weekly basis, a spokesman said.

He added: "Although we are seeing significantly fewer flights at the moment, Heathrow will remain open so that we can continue to play a crucial role in helping to secure vital medical goods and food for the nation during this unprecedented epidemic."

The earliest impacts of the coronavirus travel advisories were felt in February, as flight capacity in and out of China dropped sharply around Lunar New Year.

Meanwhile in Europe, Italy saw a 22 per cent drop in flights coinciding with the announcement of a national lockdown on March 9.

Now that the situation has intensified, flights to and from Italy have plummeted 74 per cent from their normal rates.

On March 11, the US enforced a 30-day ban on travellers from the Schengen Area, a free-travel zone consisting of 26 countries in Europe.

Although the UK and Ireland were initially exempt, the ban has since been extended to include both countries as well. 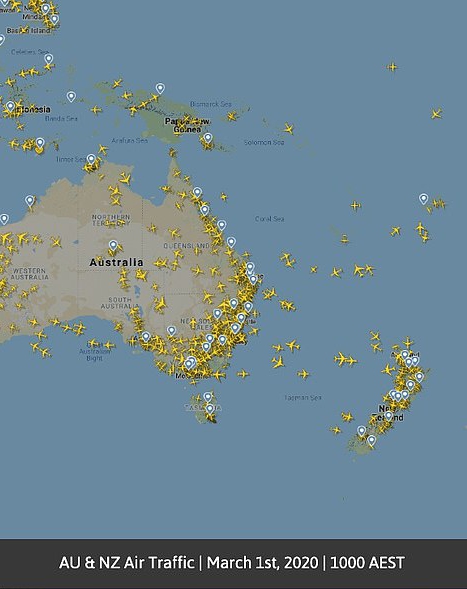 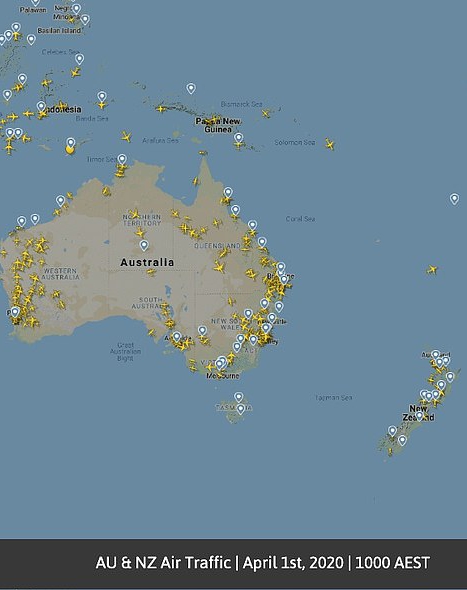 Meanwhile, as of March 17, the US-Canada border is closed for all non-essential travel.

This follows a previous announcement from the Canadian government that it would be curbing entry to only Canadian citizens, family members, permanent residents, diplomats, and Americans.

The economic impact on airlines has been immense. Nearly 40 per cent of flights impacted by the European travel bans are US-based, such as Delta and United Airlines, with billions in lost revenue already estimated for this year, says the forum.

"Many airlines worldwide face the threat of bankruptcy in coming months, if these declining trends continue.

"To hedge against these domino effects of the outbreak, US airlines are requesting upwards of $60billion in bailouts and direct assistance from the government.

"Covid-19 is throwing everything up in the air – including the fate of airline companies," it adds. 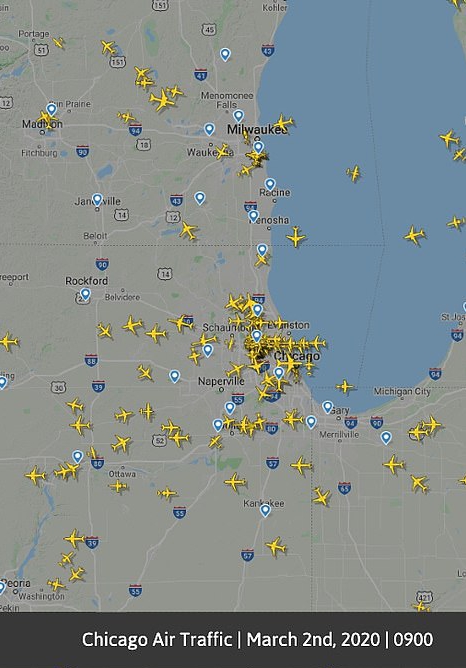 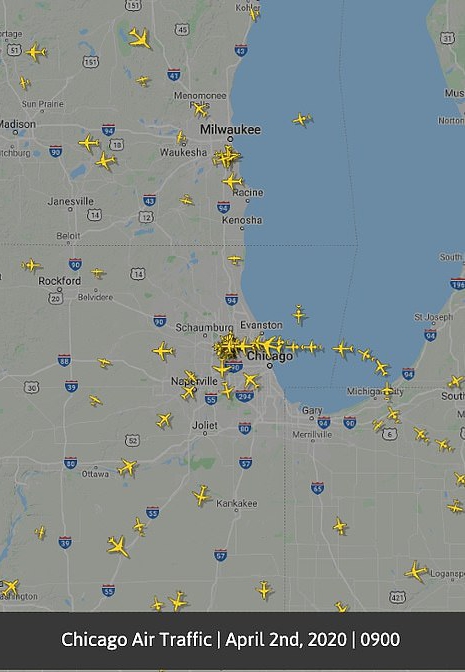 Reuters reported on March 31 that airlines across the globe are "feeling the pain" as travel demand withers because of the coronavirus outbreak, scrapping flights and ditching financial forecasts.

The global health crisis has brought European air travel to a standstill, leaving airlines with no revenue and facing a struggle for survival.

Air France-KLM said on March 16 it would park its biggest airliners and slash services by up to 90 per cent.

The group said it had identified measures to save 200 million euros ($223 million) in 2020 and ways to cut its capital expenditure by 350 million euros.

Air New Zealand said on March 16 it would cut long-haul capacity by 85 per cent in the coming months and the domestic network by 30 per cent in April and May.

American Airlines plans to cut 75 per cent of its international flights through May 6 and ground nearly all its widebody fleet.

Delta is cutting domestic capacity by ten to 15 per cent, and international by 20 to 25 per cent, freezing hiring, offering voluntary leave options to staff and looking at early retirement of older aircraft.

In an effort to raise much-needed revenue and keep some planes in the air, Delta and Air New Zealand said they had joined the growing number of carriers offering cargo charters on passenger planes.

"We are getting some strong interest from customers wanting to ship to and from Shanghai, Hong Kong, San Francisco, Los Angeles, Sydney and Melbourne," Air New Zealand's GM Cargo Rick Nelson said.

Around half the world's air cargo normally travels inside passenger planes rather than dedicated freighters, so the cancellation of passenger flights has led to a sharp reduction in cargo capacity. 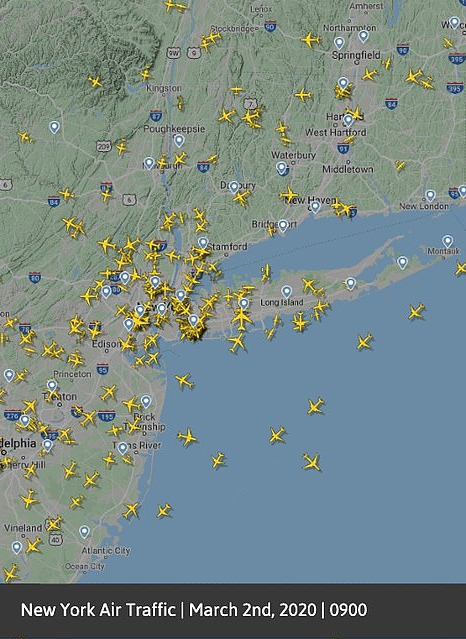 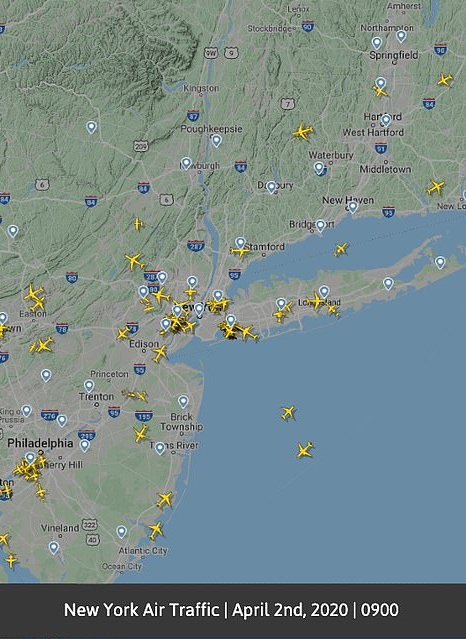