‘I voted Tory but they’ve kicked UK farmers in the teeth’: Award-winning farmer feels betrayed after MPs failed to stop food being sold in Britain that was produced abroad using lower safety or animal welfare standards

Farmers feel ‘hugely betrayed’ by the Tory Party after a bid to protect Britain from low-standard food imports was torpedoed, an award-winning farmer said last night.

Andrew Ward, who has 1,600 acres of arable land in Lincolnshire, claimed Conservative MPs had kicked farmers in the teeth after they failed to agree a legal protection that would stop food being sold here that was produced abroad using lower safety or animal welfare standards.

The Conservatives had pledged in last year’s Election manifesto: ‘In all of our trade negotiations, we will not compromise on our high environmental protection, animal welfare and food standards.’ 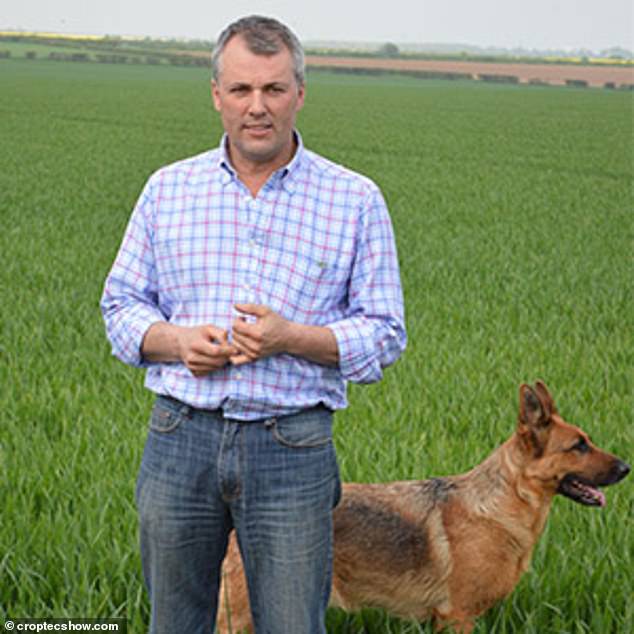 Andrew Ward, who has 1,600 acres of arable land in Lincolnshire, claimed Conservative MPs had kicked farmers in the teeth

Earlier this month, senior Tory MP Neil Parish tabled an amendment to the Government’s landmark Agriculture Bill which would have prevented future trade deals from allowing food into the UK not produced to the equivalent standards required of farmers and processors here. But it was defeated after failing to receive Government support.

Mr Ward, who was awarded an MBE for his services to agriculture in 2014 and was crowned Arable Farmer of the Year by Farmers Weekly in 2009, said the vote had rocked his faith in the Conservative Party after he backed them at last year’s General Election.

‘I was undecided but at the last minute I thought, “No I will stick with the Conservatives”, so I voted for them,’ he said. ‘The trust that we have put in our Conservatives to look after industry and look after businesses has not materialised. 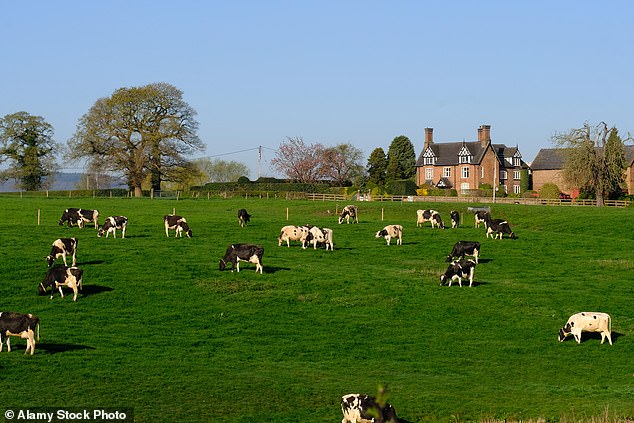 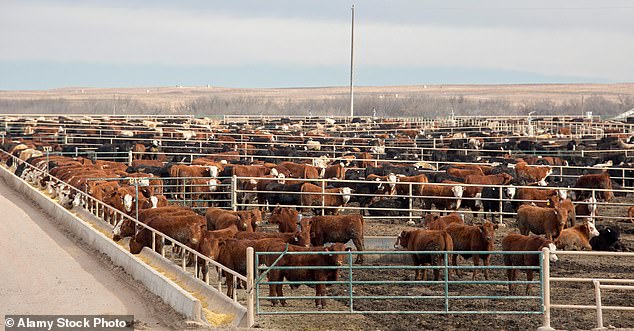 In Kersey, Colorado, it is a very different picture. This cattle feedlot operated by JBS Five Rivers Cattle Feeding has a capacity of 98,000 cattle

Ministers face a fierce public backlash if they allow US chlorinated chicken or hormone-treated beef to be sold on Britain’s supermarket shelves.

An overwhelming 93 per cent of Britons want our high food standards to be protected in post-Brexit trade deals, according to polling commissioned by Which?

One survey found that 80 per cent of the more than 2,000 adults quizzed would not be comfortable eating beef that had been reared using growth hormones.

Another poll of 2,399 Britons found 68 per cent were not happy about eating chicken washed with chlorine.

In a separate online survey by the consumer watchdog involving 21 adults, every participant believed that maintaining or improving food standards should be a ‘post-Brexit priority’. ‘Our biggest opportunity when we leave the EU is to introduce the most stringent food safety and standards in the whole world,’ one 53-year-old man from South West England told Which? researchers.

The US Department of Agriculture has dismissed concerns over food safety standards as ‘unfounded’.

‘That is where we feel hugely betrayed. A lot of us wrote to MPs before this amendment was discussed to highlight how important food standards are – and we really do want them protecting – and they wrote back to us all and said they fully appreciated where we were coming from and really did understand and agree that food standards need maintaining. And then when the votes took place they completely turned tail and they all voted against it – that’s another betrayal. It really kicked us in the teeth.’

Mr Ward, who grows wheat, spring barley, sugar beet and oilseed rape, has been praised for the innovative methods he uses.

Rapeseed from the farm is processed into oil blends used by McDonald’s and it is one of only two farms in the country to be awarded ‘flagship’ status by the fast-food giant.

He said arable farmers were concerned about cheap wheat and barley imports, while livestock farmers were worried about beef, pork and chicken produced abroad to much lower standards.

Earlier this year, The Mail on Sunday revealed leaked emails in which one of the Government’s most senior officials made the incendiary suggestion that Britain does not need its own farming industry.

Influential Treasury adviser Tim Leunig argued that the food sector was not ‘critically important’ to the economy – and that agriculture and fishery production ‘certainly isn’t’. Mr Ward said our story sent ‘shockwaves through the whole industry’.

Boris Johnson: ‘We will not accept any diminution in food hygiene or animal welfare standards.’ (February 2020)

Prince Charles: ‘The aggressive search for cheaper food has been described as a drive to the bottom which I am afraid is taking farmers with it. They are being driven into the ground by the prices they are forced to expect for their produce and this has led to some very worrying shortcuts. In the UK, as elsewhere – but particularly in the US – the consequences of this are ever more apparent in the deteriorating state of our public health.’ (May 2013)

Environment Secretary George Eustice: ‘In the UK we have built a very special market based on provenance, with particular attention to food safety and animal welfare standards. We will not jeopardise that through trade deals in the future.’ (February 2020)

International Trade Secretary Liz Truss: ‘We will never undermine our high domestic environmental protection, animal welfare and food safety standards – ensuring that in any agreement British farmers are always able to compete.’ (May 2020)

Shadow Environment Secretary Luke Pollard: ‘Labour will vote against this [Agriculture] Bill because the issue of farm standards for our food is not a technical one; it is fundamental to what kind of country we are.’ (May 2020)

Minette Batters, National Farmers’ Union president: ‘We must not tie the hands of British farmers to the highest rung of the standards ladder while waving through food imports which may not even reach the bottom rung.’ (February 2020)

US President Donald Trump: ‘Working on major Trade Deal with the United Kingdom. Could be very big & exciting. JOBS! The EU is very protectionist with the US. STOP!’ (July 2017)

Foreign Office Minister James Cleverly: ‘Of course we are not going to have chlorinated chicken.’ (January 2020)

Woody Johnson, American Ambassador to the UK: ‘Millions of Britons visit America every year and I would wager most eat chicken while there. Ask them and I am sure they will tell you that American agricultural products are safe, nutritious and delicious. These products should absolutely be included in a US-UK free trade agreement.’ (January 2020)

Conservative Party manifesto 2019: ‘In all of our trade negotiations, we will not compromise on our high environmental protection, animal welfare and food standards.’

Q&A on looming threat to our way of life

How does the EU subsidise UK farmers at the moment?

Since 1972, our farmers have relied on subsidies distributed through the EU’s much-derided Common Agricultural Policy (CAP). Under it, UK farmers are paid around £3 billion a year – with the average basic payment worth £22,700 per farm. However, this subsidy will be phased out in England from next year (and 2024 in Scotland and Wales) as part of a post-Brexit agricultural revolution.

How will the Agriculture Bill change that?

It introduces the concept of ‘public money for public goods’ into farming for the first time.

Landowners will receive cash to enhance the environment, such as planting trees. They will be expected to sign so-called environmental land management contracts detailing their commitments to issues including flood management and improving public access.

But the Bill has been criticised by some farmers for being too ‘green-focused’ and for failing to support food production.

Who will be the winners?

Super-rich landowners could receive thousands of pounds in taxpayer support without growing a single carrot. Details of the new environmental contracts remain vague and the system could prove fiendishly complicated and open to abuse. How, for example, will the protection of a peat bog be rewarded compared to planting a hedgerow or maintaining a footpath?

Who will be the losers?

For many smaller family-owned farms, the annual EU subsidy is all that keeps them from insolvency. The National Farmers’ Union estimates about 40 per cent of UK farms would make an annual loss if the payments are taken away.

Payments are being cut by between 5 and 25 per cent next year before the new system has even been introduced.

What is the concern about imports from US mega-farms?

America stands accused of having much lower animal welfare and environmental standards. It is feared a flood of cheap food from US mega-farms would undercut British farmers and result in lower standards here.

Despite a Tory pledge not to compromise our high food standards, a backbench bid to enshrine this into law was defeated earlier this month. The US continues to insist agricultural goods are included in any free trade agreement.

What are the UK’s animal welfare rules?

Britain boasts world-leading welfare standards, with detailed rules governing issues such as transport and slaughter. The UK has banned battery cages for hens since 2012 and so-called sow stalls since 1999. Since 1997, animals have been recognised under EU law as sentient beings – which means it is acknowledged they are able to feel pain and suffer.

How do US animal welfare standards compare?

There is no federal US legislation governing the welfare of animals while they are on the farm, and only weak and patchy regulations at state level.

The rules governing slaughter are much less detailed – and do not exist at all for poultry. Only ten states have banned sow stalls. There is also a general resistance to acknowledging sentience in farm animals.

How are UK and US food production rules different?

Chicken in the US is washed in chlorine to remove harmful bacteria – a practice banned in the EU in 1997 over fears it allows poor hygiene standards in the production process.

Hormones given to pigs, sheep and cattle on US mega-farms to boost their growth rates or milk production are banned in the EU and other countries.

And the use of antibiotics in US cattle is far higher than in the UK, despite fears by experts the treatments will spread deadly drug-resistant illnesses.