Farmer working hard amid coronavirus pandemic is abused by vegans

A farmer working hard to get food on supermarket shelves during the coronavirus pandemic – has been the subject of vile abuse from vegan trolls.

Gareth Wyn Jones – who runs a 2,000 acre farm with vegetables and livestock – has been compared to the Nazis and slave owners on social media.

And he explained some of his fellow farmers have even had death threats. 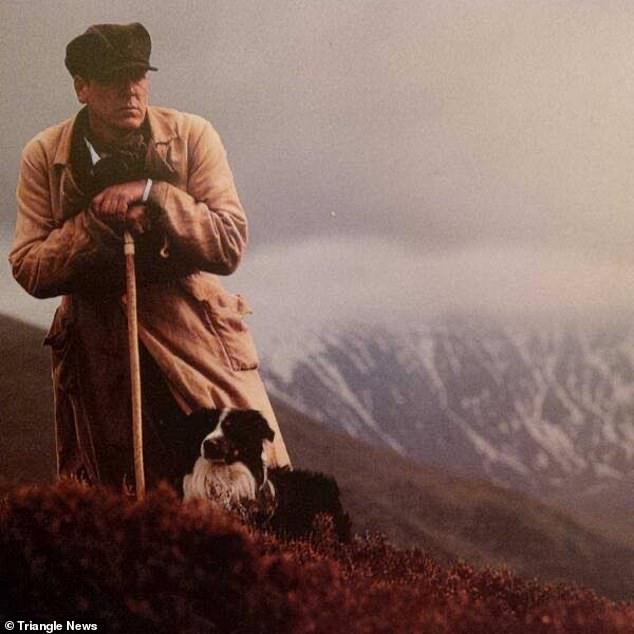 Gareth Wyn Jones, 52, has been the subject of vile abuse from vegan trolls after working hard to get food on the supermarket shelves during the coronavirus crisis

But Gareth, 52, says this will not stop him working hard to deliver food to Brits from the farm his family has worked on for generations.

‘Some have been absolutely awful – I’ve been called a murderer, rapist, everything under the moon,’ Gareth said.

‘I’ve spoken to other farmers who have had death threats this week – which is pretty scary.

‘We cannot live in fear of these trolls, they will never beat me.’

Gareth runs the same farm in Llanfairfechan, North Wales, that his family has worked on for 370 years.

The farm is very sustainable, and Gareth even has bees to make honey.

In the summer his sheep roam free on a 27,000 acre wild plot which goes up the Carneddau Mountains. 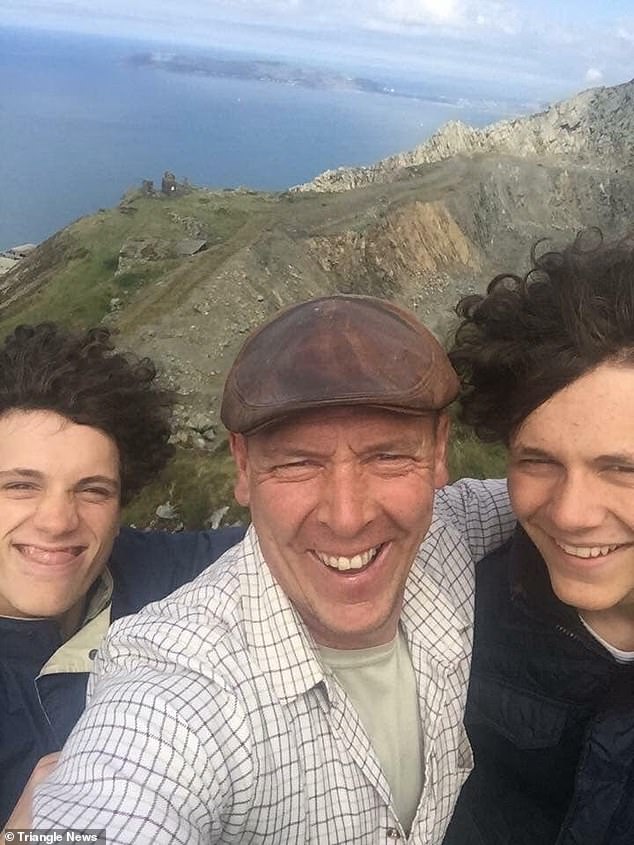 The farmer – who runs a 2,000 acre farm with vegetables and livestock – pictured with his children Sior and Rolant

‘My children are strong minded and can protect themselves,’ he said.

‘It’s ongoing, it’s every week – they’re targeting people. The majority of them are trolls, making accounts up.’

Gareth has been receiving abuse on social media for several years.

The Twitter user @VeganRedemption said: ‘Welfare’ is just another excuse you make to make you feel better about enslaving and exploiting and killing.

‘I guess Auschwitz would have been just fine if the Nazis were nice to Jews before they slaughtered them.’

They added: ‘You sound like a white plantation owner, who owns slaves back in the day, yelling at anti-slavery activists saying you don’t have the right to tell me what I’m doing is wrong.’

She said: ‘Although I am partial to chopping my cat’s head off and eating her litter.

‘I stick my finger up her b** to get milk out of her as well. Tastes good, f**k the babies. I will eat them later.’

‘Stop acting like you give a f**k about the sheep and concentrate on helping the environment. Plant some f*****g trees, you a***.’ 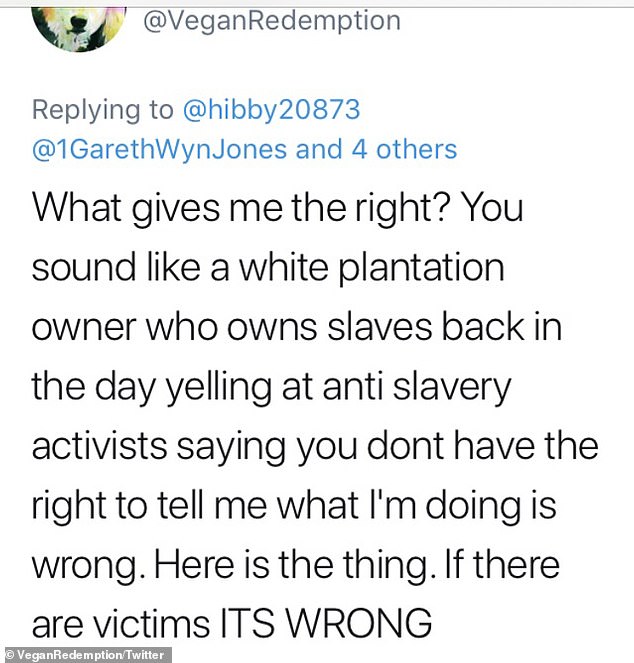 One Twitter user said: ‘You sound like a white plantation owner who owns slaves back in the day’

‘The cruelty that farmers do to their animals is horrendous, it’s all about money, money.’

‘This guy is just stealing milk that doesn’t belong to him.

‘That guy needs a 21 days vegan diet in order to get rid of all that FAT accumulated in his HUGE belly.

This week – while Gareth has been working hard to get food to supermarkets in the coronavirus pandemic – he received more abuse.

Twitter user Mar March Heather said: ‘Can we stop responding to this t**t.

‘His life revolves around attention and you give it to him.

‘Probably lies in bed chugging away over many vegans he riled up.

Gareth thinks he gets targeted by the trolls due to his media work.

‘I’ve got quite a big following, I do a bit of television and radio work, they seem to think they can target me and say what they want,’ he said.

‘It’s quite sad really. A lot of them have got nothing better to do with their lives.

‘You don’t listen to them because they are so deluded and out of touch. They’re about one per cent of the population – but they’re very noisy.’

Gareth thinks the praise farmers have been getting during the coronavirus pandemic has annoyed the vegans.

‘I think the vegans are getting frustrated as everyone is getting behind British agriculture at the moment,’ he explained.

‘There’s so much support out there, and that’s what is driving them. We can all do our bit by buying locally, sustainably and seasonably. 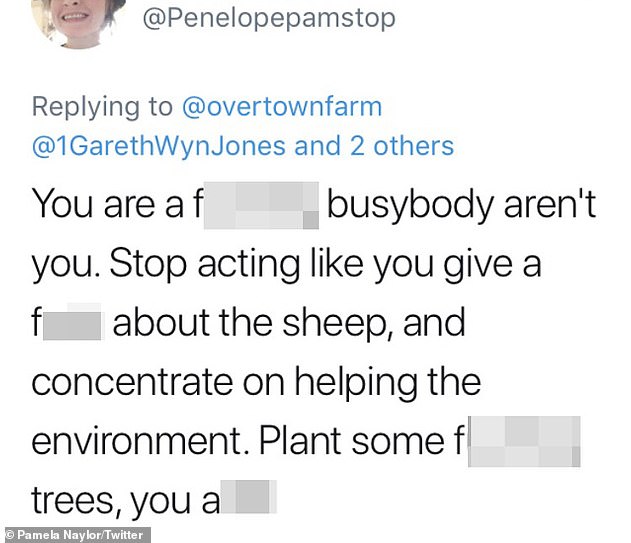 The vile abuse continued on social media: ‘You are a f*****g busybody aren’t you’

‘We have seen a big change with panic buying, a lot of vegan food was left on the shelves.

‘People are going back to the basics – meat, eggs, milk, butter, cheese. This is in our DNA, we are bred to do this, we are omnivores.’

And with his decades of experience working on the land, the dad-of-three believes he knows more about producing food sustainably than the vegans.

‘I’m a farmer, I know what it takes to produce food – meat and vegetables,’ he said.

‘They get very annoyed when I say it takes a lot more lives to produce my veg than it does for my meat to be on the table.

‘There’s a lot more creatures who die for me to grow my carrots, than for one sheep or cow.

‘If you are growing any crops, you are going to have to keep the slugs, snails, aphids, butterflies and caterpillars.

‘You could kill hundreds of thousands of lives just to produce a field of carrots. Is one life more than another?’

‘My cows are outside, it is not a factory farm. My family has been farming the same land for 370 years.

‘We are big believers in sustainability – we have honey bees here.

‘I think it’s very important that everyone has the opportunity to eat what they want.

‘I’ve got no problem with people being vegan, there are lots of nice vegans out there, but you have to respect other people’s choices.’